Mahanagar (1963) (The Big City), is unarguably one of the finest creations of Ray. This film is based on ‘Abataranika’, a short story by Narendranath Mitra. The narrative primarily illustrates how social relationships between the private and the public spheres are maintained by ‘ideal’ house-wives of the Bengali middle-class families. In this film, Satyajit Ray has presented a very strong female protagonist playing a critical factor in social change. Ray’s symbolic portrayal of women in contemporary society can be identified as path-breaking.

The narrative very interestingly begins by portraying how in a Bengali middle-class family, the son, Subrata (played by Anil Chatterjee) who works in New Bharat Bank, is the only earning member. On one hand, while he has the responsibility of looking after the economic standards of the family, his wife Arati (played by Madhabi Mukherjee), the protagonist of Mahanagar (1963) (The Big City), attends the public sphere.

The father or patriarch of the family, Priyogopal (played by Haren Chatterjee), a retired school teacher, is a conservative. Mahanagar (1963) (The Big City) succinctly represents the conflicting ideologies between the two generations yet having common underlying patriarchal values of Bengali middle-class families.

While the head of the family unquestionably considers it to be unjust for his daughter-in-law to go ‘outside’ and work, Subrata is found to be in dilemma in navigating his way through the values of being a ‘modern’ man or follow the path of his father. He expresses his concern for his sister (played by Jaya Bhaduri), “What’s the use of studying? You will end up with kitchen duty like your sister-in-law here.” necessarily expresses his disgust towards such values held by the stereotypical families.

He also mocks the conservative understanding of how a daughter-in-law in the family working outside or wearing ‘red lipstick’ are looked down upon by the middle-class morality in one of his conversations with Arati. Although as the narrative progresses, we sense a ‘change’ in him.

As a result of their difficult economic condition, Arati decides to take up a job so that the economic burden of the family gets shared. While the job may appear as a ‘need’ of the hour, it is also important to highlight the vision of Satyajit Ray, who beautifully portrayed in many instances, how in our everyday commitments, desires intersect with our needs. 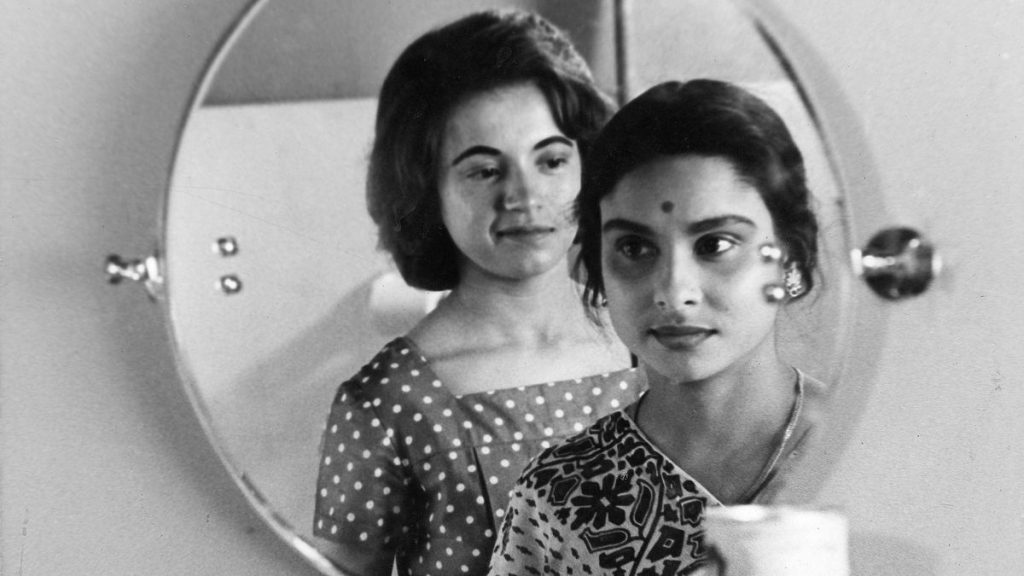 However, none of the family members were happy with her commitment to work. It is important in this regard to underline how her son, Pintu (played by Prasenjit Sarker), seven or eight years old, reacts to her decision. Such an instance of absence of his mother comes as a shock to him and he expresses his anger. The depth of the scene where Arati expresses her melancholy of how things would have been easier for her if there would be no sense of objection, clearly speculates the structural barriers faced by women after marriage with their work interests. The later in the narrative also, when Pintu falls ill, he blames his mother for going to work, saying “mother is bad.”.

This illustrates in Mahanagar (1963) (The Big City) how conservative values are internalized and normalized among children from a very young age through socialization. On the other hand, he is immediately surprised to see his father not going to work for a few days. The entire confusion Arati faces, even while she goes to work on the first day, on the back of her mind, indicates the understanding of how in many instances the capitalist patriarchal society expects women to prioritize ‘household’ (private) rather than ‘outside’ (public). The entire patriarchal construction of ‘motherhood’ and ‘child-rearing’ invisibilizes the importance of the responsibility of shared ‘parenthood’ in the private sphere.

In the narrative, Satyajit Ray has beautifully presented various analogies. It is important to highlight the scene, where Arati compares the intensity of her cold hand between her marriage day and her first day of going for work, representing both as important days in her life as it would mark the beginning of her new ‘identity’. In this narrative, it is important to highlight how Ray, has adhered to symbolism to convey his message to the audience. On the first day of her work, her interaction with her co-worker, Edith (played by Vicky Redhood), Arati showing her vermillion to communicate she is married and Edith showing her ring to indicate that she is engaged can be viewed in two ways.

Recommended Read: Why Do We Love Movies?

On one hand, it indicates the understanding of ‘bio-power’ and ‘bio-politics’ (Foucault 1982), how women’s bodies are marked to denote their relationship status following a sense of policing and exploitation. On the other hand, it would also symbolize how their identities are located in terms of their private social relationships. The scene where Arati looks at the mirror after receiving her first wage symbolizes her accomplishment and her glory in public sphere. Her action of wearing lipstick every day only in work, gifted by Edith can also be identified as a symbolic expression of her freedom from the private to the public sphere.

As argued above, Priyogopal has been exhibited as a very interesting character. His interpretation of ‘guru-dakshina’ where he feels, he has a certain form of claims he can make on his students. While justifying such understanding he keeps mentioning the relationship between Dronacharya and Eklavya. His dialogue of, ‘I am too old to change my views’, addresses how typical middle-class values feel threatened by the sense of change. But later in his conversation with Arati where he confronts his prejudice of holding on to conservative ideologies rather than accepting change, while he himself goes against those by speaking ill about his son to his students to achieve ‘guru-dakshina’ underlines the deception of existing values.

But it is also important to address how Subrata felt a sense of threat by Arati working outside, leading him to ask her to leave work but how he molded the excuse around ‘family’ burden. But, there we see very visibly how her desire of working outside ‘ghor’ (household) getting subsumed as a result of the patriarchal middle- class family values. But the irony of the narrative reflects the brilliance of Ray, how he managed to capture the hypocrisy of these values. While Subrata loses his job as a result of the shutting down of banks, he asked her to not leave the job, but by using a local phrase -“Stree’r poush maash, shami’r shorbonaash”- he reflects his uneasiness of her working, overlooking that the raise she demanded is because of extreme condition of the family. 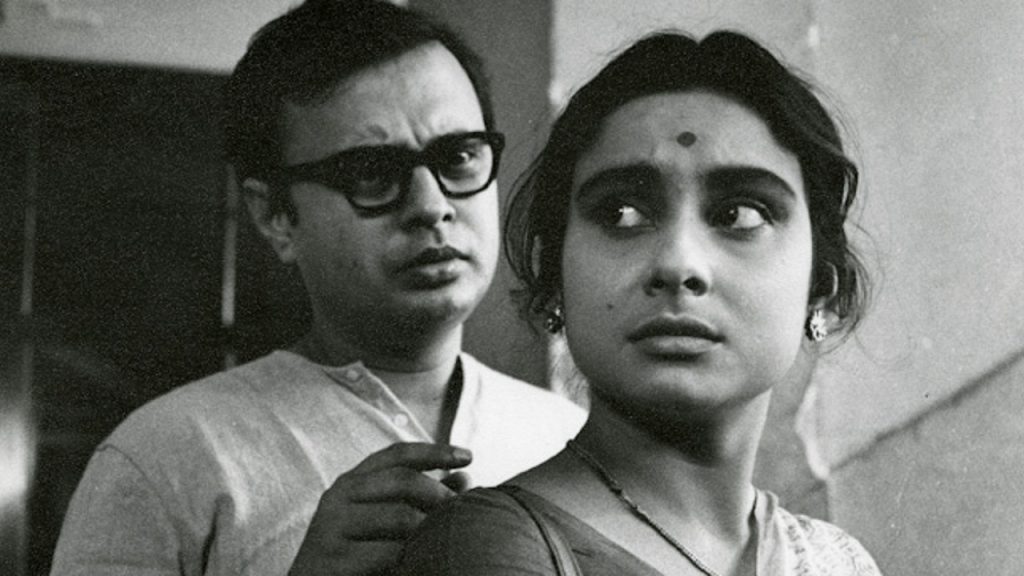 The scene where Edith goes on to demand commission from Mr.Mukherjee, the owner of the company where Arati works, holds relevance to date. It reflects how the feminist movement of demanding increase in wage of women labour is still one of the most relevant concerns globally.

Related to Mahanagar (1963) (The Big City): Nayak: The Facade Behind Fame

Another interesting scene in the coffee shop where Arati describes Subrata’s occupation to her friend’s husband, in spite of the fact that he lost his job reflects her urge of protecting the honour of her husband and how if her income viewed as supplementary would still be accepted while her being the sole earner would be regarded problematic. It is also important to address here how patriarchal family values tend to put a major burden on ‘son’ of the families by putting them on a pedestal of the efficient and ‘first-class’ earner of the family.

It is also significant to address Ray’s portrayal of minority communities, who are often stereotyped by the ones having social power. This we can necessarily understand from how Edith is fired by Mr. Mukherjee. The most significant part of the movie, in Arati’s confrontation with Mr. Mukherjee, necessarily questions the injustice that happened against her co-worker, Edith. Despite her worse economic condition she chooses to give her resignation letter when Mr. Mukherjee refused to apologize to Edith. This reflects how she chooses to prioritize her values and stands by right while in many instances we fail to do so, as agreed by Subrata too when he acknowledges and appreciates her courage.

But it also poses an important question to us as viewers; what values did Arati adhere to even though she is from Bengali middle-class family? Or is it her experience in constant fighting against existing moralities that helped her break through the shackles?

The last scene with the dialogue by Subrata, ‘Let us try, I believe we both can’ ends with uncertainty where we as audiences are unaware of what is waiting in fate for Arati and Subrata. But the sense of hope resides in our minds. In this complex big city, they both find courage and hope in the form of each other. Ray’s sheer brilliance lies in ending this film with uncertainties and yet filled with expectation that makes this film a landmark in the history of Indian cinema.

12 Essential Christmas Movies to Watch During the Holiday Season