May I Help You (Season 1), Episodes 9 & 10: The magical realism theme-based Korean drama- ‘May I Help You’ is the story of Funeral Director- Baek Dong Ju and Errand Business Owner Kim Jip Sa (also known as Kim Tae Hee). Dong Ju possesses the special skill to communicate with the dead and grants their last wish before they take their final journey to heaven, while Kim Tae Hee helps achieve the feat. The show also has a romantic angle between the duo, who have heartwarming chemistry.

The best part about ‘May I Help You’ is the subtlety and realism of human emotions. Unlike other romantic comedies, this drama does not force the narrative down your throat. Also, another good thing is that things happen quickly, and a lot of time is not spent on deliberation. For example, Dong Ju immediately confesses her feelings to Tae Hee when she realizes them herself. There is also no anxiety-laden misunderstanding between our star couple because of Chung Ha. In short, the script is mature and well thought through.

With each passing episode, the K-drama is becoming more pointed toward the love story of Dong Ju and Tae Hee. The narrative about her being able to see and talk to dead people takes a back seat and only acts as a ploy to aid the relationship between the lead casts. To recap the story, here’s the chain of events. As a subplot, Tae Hee’s ex-girlfriend of 10 years and first love re-appears in his life, wanting to get him back, which in turn complicates the status between Tae Hee and Dong Ju. Tae Hee’s younger brother, Joon Ho’s story is shown in bits and parts to bring the audience up to date on why Tae Hee blames himself for his death (we still don’t know yet). Aside from this, numerous events further the romance between Tae Hee and Dong Ju. 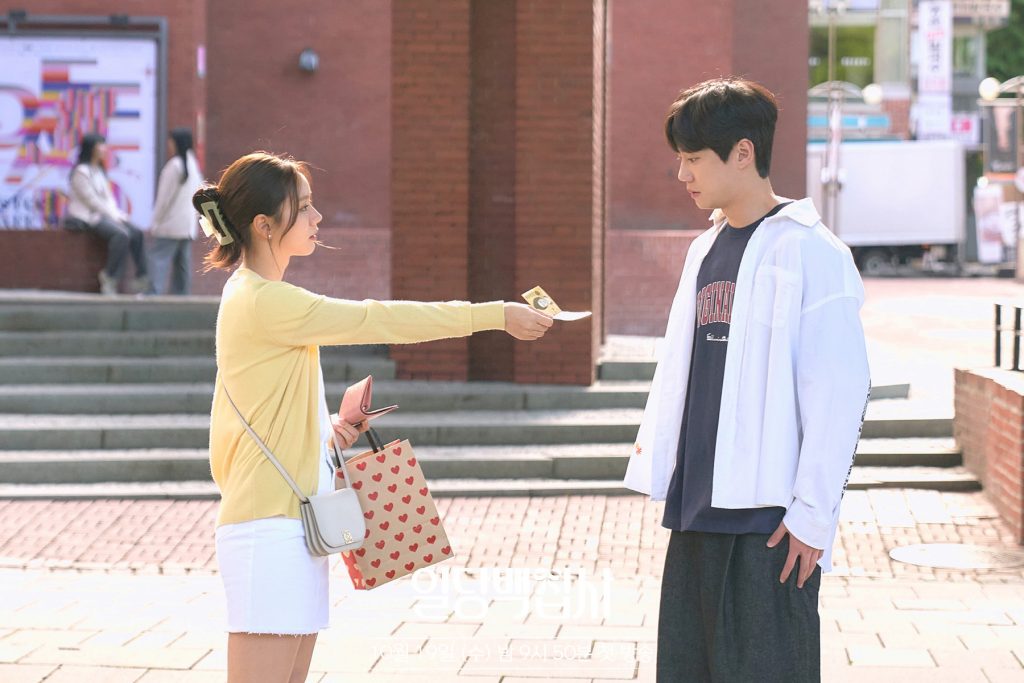 In Episode 9, the mystery about police officer Hae-an continues as to why he visits the hospital so frequently and his role in Joon ho’s accident. However, the center stage is occupied by Dong Ju and Tae Hee, who is on a hiking and camping trip with the church kid- Joseph. In a moment of vulnerability, Tae Hee tells Dong Ju about his brother Joon Ho which is also a revelation for the audience that the ring that Dong Ju is safeguarding is Tae Hee. She is oblivious, but the audience knows that it is destined for her. Tae Hee’s confession brings them emotionally closer to each other and is followed by a beautiful romantic sequence between the two.

But the happiness is not long-lasting because Chung Ha reappears yet again. And this time, she comes with both bags and baggage. She is determined to get Tae Hee back despite him telling her repeatedly that it’s over between them. In a flashback, we are yet again taken to the hospital on the night of Joon Ho’s death. And we find out that when both people were brought-in that fateful night- Chung Ha helped the truck driver and saved him from dying. Obviously, she did not, not help Joon Ho on purpose. But it just happened as a matter of chance.

Tae Hee is definitely hiding something that is just between Vincent and him. But he definitely doesn’t want to get back together with Chung Ha. While Chung Ha meets Dong Ju and clearly expresses that she will win back Tae Hee. Another subplot is that of Yo So-ra (Dong Ju’s friend), who is in love with Dong Ju’s team leader- Il Seob. Dong Ju tells her to give up because his status is also complicated- he dated someone for 20 years who went away, got married, had a kid, and has now come back into his life again.

As the events progress, Dong Ju meets a dead teenage girl- Seo-rin, in the powder room and helps her confess her love for a boy she liked while she was alive. In the process, Dong Ju finds out that the boy likes Seo-rin as well. This story comes as a realization to Dong Ju to confess her feelings to Tae Hee. Which she immediately does!

Episode 9 ended on a high with Dong Ju confessing her feelings for Tae Hee. The scene follows in this episode, and Tae Hee breaks Dong Ju’s heart by rejecting her and walking away. He goes to the extent of saying- ‘Don’t say that again; it makes me uncomfortable. Ouch! Anyway, Dong Ju takes the rejection gracefully, apologizes to Tae Hee the next day, and wishes that things don’t get awkward. But now, Vincent is in on the story and knows that there is something brewing between the two.

Alternately, Hae-an (the police officer) confesses his love for Dong Ju, to which she politely refuses and tells him that she already likes someone else. He is obviously heartbroken, but the sadness is short-lived since he receives the news of being promoted to the investigator. One day, he comes across a file about Joon Ho’s investigation on his computer. He does not open it. But hopefully soon. There is also an incidental visit to the hospital where he sees Chung Ha. The glance is suggestive of the following romance. We’ll see…

Here, Dong Ju and Kim Tae Hee are slightly awkward with each other, but Tae Hee doesn’t stop caring for her. He gets her the hangover cure medicines when he finds out that Dong Ju has had too much to drink the previous night. But on the other hand, he avoids meeting her in real life. So Vincent had to take up the task of driving Dong Ju to one of her work jobs. Meanwhile, the father (from the church) is visited by one of the ladies- Agnes, who is getting married, and asks the father for some help. He tells her to go to ‘A Dime A Job.’

Turns out that Agnes was getting married and had no friends or family, so she wanted ‘A Dime A Job’ to help her with the same. Vincent and Tae Hee could help her, but she needed a female friend, so Dong Ju volunteered for the same. Dong Ju offered help because she had met Agnes’ dead brother in the powder room and was requested by him to help Agnes. So she agreed to play the part of Agnes’ friend from the US. This episode also re-introduced Dong Ju’s ex-boyfriend, who had sent Tae Hee to break up with her on their behalf of him in the first episode. He is already on thin ice with Tae Hee after he accidentally bumps into him at a red light and makes some insensitive and rash remarks.

As expected, Vincent makes Tae Hee fill in for him on Agnes’ errand job. So Dong Ju and Tae Hee attend Agnes’ wedding as a couple. However, the wedding also has Dong Ju’s ex-boyfriend as a guest. He immediately recognizes Tae Hee and gets jealous when Tae Hee falsely agrees to a date, Dong Ju. Tae Hee could not hold back his anger when the ex-boyfriend trash-talked Dong Ju, and a fight ensued. After making quite a scene at the wedding, Dong Ju and Tae Hee apologize to the bride and groom. And the groom advises Tae Hee to realize and accept his feelings before it’s too late.

So on the way back from the wedding, Tae Hee confesses to Dong Ju that he had lied before and that he likes her as well. The episode ends on a high with an aww-so-cute kiss between the adorable couple. However, it leaves us with several questions- who does Hae-an visit in the hospital repeatedly, and what’s his role in Joon Ho’s death? Will Hae-an and Chung Hae fall in love? Will Joon Ho’s investigation be brought to light again and be a source of eye-opening revelations? Why is Tae Hee hiding the reason for his break-up with Chung Hu from everyone, and why does he not want to be happy? Did he accept his feelings for Dong Ju in a moment of weakness, and will he go back to his words again?

Hopefully, we will find out in the next episodes.

Where to watch May I Help You (Season 1)

Qala (2022) Review: A Portrait of an Artist as a Young Woman