Home»OTT»Disney+ Hotstar»Mickey: The Story of a Mouse (2022) Documentary Explained: A look at Mickey from a cultural lens beyond the artistic one
Disney+ Hotstar/Explainers/OTT/TV

Mickey: The Story of a Mouse (2022) Documentary Explained: Mickey Mouse is a character that has been adored since its inception. The new Disney+ documentary – ‘Mickey: The Story of a Mouse, directed by Jeff Malmberg, shows several stages of this cartoon’s progress over the years. From being a creative child of Walt Disney to be a part of several people’s lives across the globe, Mickey’s journey is utterly fascinating. The film focuses on these aspects with the help of clips from older films and interviews where people mostly profess their utmost love for this iconic character. As a result, it oftentimes becomes a sugar-coated and nostalgic look into the character’s hitherto influence.

Mickey: The Story of a Mouse (2022) Documentary

The Inception of Mickey Mouse

It is 2022, and Mickey Mouse is still one of the most recognized characters across the globe. The drawing of this cartoon is essentially 3 circles joined in a way that resembles a long-eared mouse. Anyone, who has dabbled in some kind of visual art, would know the importance of shapes. Easily identifiable shapes make logos appear united. While that neurological element adds to its memorability, the character was borne out of necessity and for an artist’s survival purpose. While Walt and his brother’s business prospects were in shambles, Walt thought of Mickey Mouse – while riding a train. 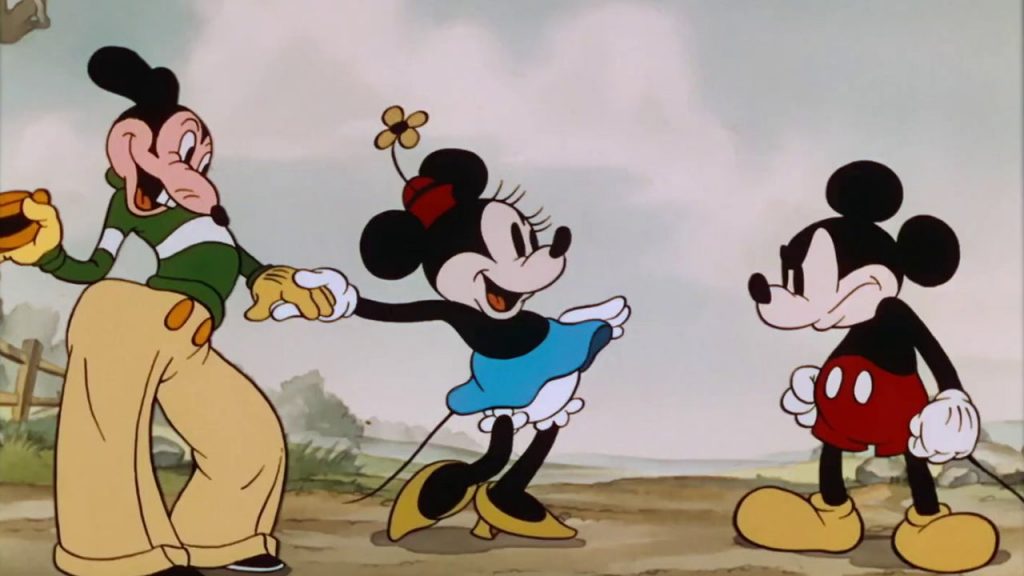 Over the years, the man, the myth, the legend, had shared several versions of stories about how the character was invented. No matter which one we consider to be true, Mickey embodies an escape from poverty (like Walt’s), irrespective of that. He embodies hope for numerous young and old people, who derived pleasure from watching this animated mouse. The early short films, showed him engaging in silly buffoonery, which caught fame in no time. Walt himself was infatuated with this mouse and often told stories of the wonder tree where he envisioned the tricks from the early years of its film’s narratives.

Animation is a grueling process and especially early-age 2D animation, which needed a dedicated hand – since every single sketch needs to be drawn by hand in this process. Studio Ghibli is one of the few studios that continues to follow this process. To be able to make a film come to fruition in this manner, an animator needs to work like a machine. And I do not mean that the artist needs to be devoid of emotion. They need to churn out several sketches with concentration and precision. Through the documentary, we witness personal accounts of different artists from Disney studios who had the rigor and the capacity to handle that burden.

Besides the tiring nature of the job, some of the interviews also highlight an unequivocal adoration for Mickey. They share how much this little mouse means to them in their personal and professional lives. We see a location from California, where Walt started his work, which now is a tattoo studio. Everyone being interviewed speaks of the character with love & respect and shares their creative admiration toward it. These proclamations put Disney studio in such high regard to the point that some of the interviews seem borderline fabricated.

Anyone, who has the capacity to captivate several people and influence their way of thinking, is an influencer. While the term is often associated with creatives from social media, Mickey is an influencer by the aforementioned definition. He became a character for children to escape their dreadful present lives to be a part of something exciting. This was at a time when movies were cheap and easily available sources of entertainment. Mickey’s popularity in this age group grew exponentially and so did his responsibility. He could not be shown as a careless, shameless buffoon as before.

The necessity emerged for him to be shown as a non-flawed character. The cartoon’s appeal changed over the years and so did its design. Mickey became a character that parents felt safe for their kids to watch since he embodies all the qualities they considered to be sane or ideal. The lack of any flaws made him unlike a human being, which irked some creatives. However, to make up for the enjoyment of tomfoolery, Donald Duck was invented. Still, Mickey was so dear to Walt that he made sure that the mouse will remain to be the center of attention.

While the early films of Mickey were much more chaotic, the post-war films showed him in a more domesticated manner. Many found this change odd and unnecessary, but Walt saw it as a necessity to reflect & represent the reality in the world around him. The new human-like, occasionally-flawed Mickey gave a feeling of being protected from the evil, that people craved to have after the chaos. Mickey became a proper man than just a quirky mouse. Besides that, the demonstrations for military requirements were also turned into animations by the studio, where Donald Duck’s character was often used as an army man.

In later years, Walt regretted using Mickey’s character for advertisements since fans did not want to see the mouse in that way, selling them things that they do not need. So he eventually stopped from Mickey being used for that purpose. During Walt’s life and even after his death, Mickey became a part of counter-culture where the likes of Andy Warhol and David Bowie considered him (and Walt) as a representation of resistance and artistic excellence. However, that does not take away Mickey’s shady past, which also reflects the creator’s ignorance about racism and sexism among other factors.

In the early films, Mickey used blackface and assaulted his female companions. The uncomfortable past is told by this documentary to be a representation of the times they were living in rather than the person who created it. The reasoning is flawed, but the film uses it since it wants the man to be revered and not hated for his awful past.

From the beginning, Walt Disney voiced Mickey’s character with his trademark falsetto. In his younger years, he could experiment with his voice in a number of different ways. However, as he grew older, it became harder and harder for him to manage, owing largely to his deteriorating health. As a result, other voice artists started coming up instead of him, who saw their work as a tribute to his legacy. The imprint of Walt’s voice was so strong that for a while after his death, his wife could not watch Mickey since it reminded her of him.

The Ethical Downfall of Disney Studio

After Walt’s death, the keys to Disney studios went to other people and they poorly handled the responsibility. On one side, the documentary claims the acceptance Mickey received from the audience. Despite that, the execs filed a case of plagiarism against a kindergarten school that drew their characters on school walls – which conveyed the same admiration. A Disney executive shares a diplomatic answer about this mishandling from those years. But as a viewer, you cannot help but sense it is more of a cover-up than anything else.

Mickey became a tool for the studio executives to monetize on while forgetting the values he stood for, a while before. Since the film is an American production, it mentions other countries’ films as propaganda while calling their films – patriotic. Even keeping that prejudice aside, Mickey represented a rage against the system, violence, and evil across countries. Kids from all over the globe saw Mickey as their friend and drew him into their fantasy scenarios.

A studio that pioneered such a revolution, has sadly just become a tool to gain for themselves especially in recent years, while robbing even a chance to emerge, from others. While it is a joy to see artists enamored by the character and trying to push boundaries while staying in this studio, the treatment by the studio heads towards the artists outside their company, is utterly soul-crushing.

Dead To Me (Season 3): Recap, Review, and Ending Explained

What's Going On At Netflix? 8 Points Against The Binge-Watching Model