Miso (Esom) from Jeon Go-woon’s impressive debut feature Microhabitat (‘So-gong-nyeo’, 2018) is a legitimate female slacker, who even reconstructs the scornful note attached to that term. Considering movie and literature’s treatment of female slackerdom, we obviously expect the girl to come to grips with her ‘responsibility’, trading her rudderless life for traditional female virtues of domesticity and conformity. Of course, you need to get your priorities straight to thrive under the nirvana of global capitalism, isn’t it? Interestingly, Microhabitat doesn’t treat slackerdom of a woman as the atrocious absence of virtues that’s necessary to gain legitimacy in the society. Without downplaying the miseries of being adrift, director Jeon almost imbues a Zen wisdom-quality into the free-spirited nature of her protagonist Miso. That in itself is an achievement because making us to love a character, who prefers whiskey and cigarette to shelter isn’t an easy task.

The title might make us think of a boxed-in character study, although the movie doubles up as a tender look into the economics of poor, those receiving unconditional punishment for their poorness. Miso is a hardworking housekeeper in her early 30s. She lives on a small budget, leaving money for housing rent and her daily pleasures (or commonly called as ‘vices’): smoking and drinking. Soon, her landlord increases the rent and as 2014 crawls to 2015, the price of her beloved cigarette brand skyrockets by 80 percent. The choice is to either cut back on smoking or lose the roof over the head. After slight hesitation, Miso gets her priorities straight: she sacrifices the shelter. The plan is to stay few weeks with her out-of-touch college friends (who were also part of a band), save some money and find a cheaper place. Matching up to Miso’s still youthful day-dreams is her boyfriend Han-sol (Ahn Jae-hong), a lowly office worker with aspirations of becoming a cartoonist. The narrative which unfurls in the form of bittersweet vignettes tracks the journey of homeless Miso through the perturbed spaces of her friends’ habitat. Consequently, the cutthroat economic reality and social expectations never allows her to stay in one place for too long.

Jeon Go-woon has beautifully rendered the character details of Miso that even makes the mention of word ‘slackerdom’, which in itself stimulates us to picture a lethargic imposing individual, too narrow-minded.  Miso understands her dependence on the college friends, but she’s also a good friend and expresses determination to not be in their debt. She listens to their lamentations, cleans the house, cooks food, and bestows a kind word upon them without a shred of pretension (she carries eggs to each of the friends’ house, symbolizing her nurturing or altruistic nature). Because of the way I was conditioned, somewhere deep inside, a voice did question Miso’s utter lack of ambition and responsibility. But the character’s cool-headedness and free-spirtedness looks so invigorating on-screen, compared to her friends’ quasi-judgemental glances and irrepressible sorrows that the word ambition looks like a lure to lead a life of emotional and economic pressures. In fact, Miso seems more sensible than the others, adhering to conventional wisdom. 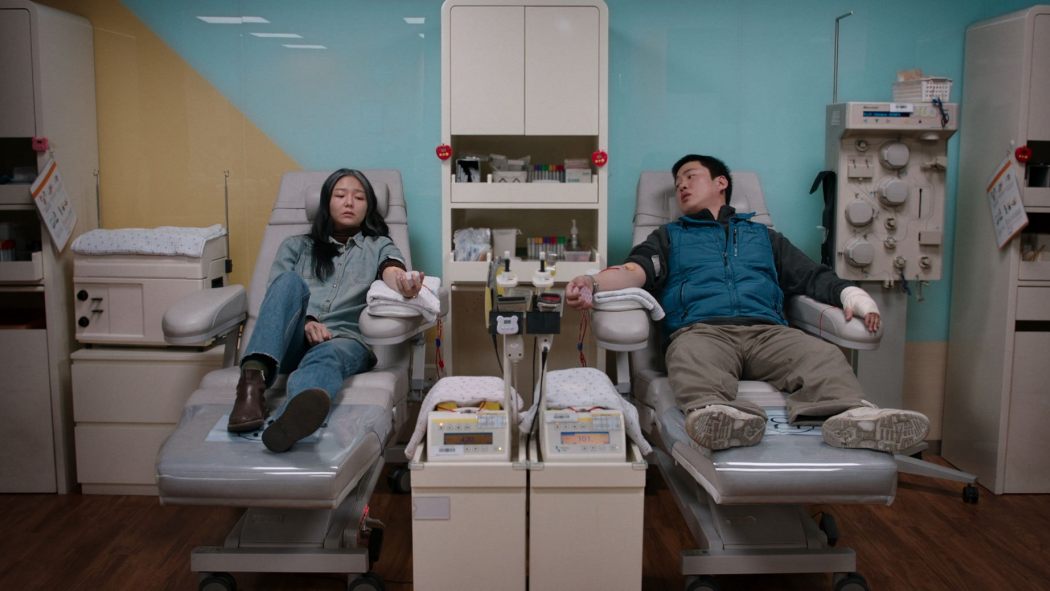 The answers to Miso’s current predicament (what happened to her parents? Why didn’t she use her college degree to pursue a professional career?) are smartly delivered on need-to-know basis, increasing our respect and empathy for her in small doses. Despite the general melancholic feeling, the script keeps a buoyant, light tone to the proceedings. It also pleasingly combines art-house lyricism with the eccentric main-stream concerns. The writing could be faulted at times for being too neatly packaged, constantly reasserting Miso’s nobility and resilience through pathos-filled vignettes. But Microhabitat should be largely applauded for conceiving the experiences of poor and the middle-class from an intimately closer perspective. Each of Miso’s stay at a friend’s house perfectly underlines the costs of living in an expensive modern city. By setting the tale in winter, director Jeon turns the landscape inherently stark and unforgiving. Be it the high-rise apartment or luxurious mansion or a cramped two-bedroom house, the precise staging cultivates the space into a window to closely examine the people inhabiting it. Even prospects of sexual intimacy is driven by the economic limitations (in the non-heated, single-room apartment, Miso and her boyfriend speedily discard their layers of clothes, but before long the freezing climate leaves them in a embrace sans sexual desire). By keenly taking in all such details of people’s every-day hard realities, Jeon Go-woon is also able to depict the contemporary anxieties of Korean society (which of course has a universal appeal).

While cigarette and whiskey are generally condemned as vices, the narrative shines a different light upon it. Miso’s friends see the habit as a sign of her irresponsibility, but she views it as the only relief to confront her dispossessed status. Much of the film arms us with that unique perspective of the homeless, concurrently inquiring the sophisticated individuals’ reasoning of a ‘proper’ life-style. For those of us who are climbing up the precarious rungs of socioeconomic ladder, our friends broken and fallen into the cracks of the system may only elicit an awkward pause amidst the gregarious conversation. But people like Miso, clinging to few sources of pleasures while braving an impoverished life, don’t simply drop off the planet. Eventually, Miso’s friends turn their memories of her into gentle nostalgia, lacking the imagination to perceive the endurance of the have-nots. Nevertheless, in spite of the sadness and discomfiting feeling reverberating in the final shot, there’s also a note of hope. And, we naturally wish for the survival of free-spirit among the clustered monotony. Moreover, for all its personal and socioeconomic commentary, Microhabitat never becomes didactic or tedious. Part of the reason is director Jeon’s subtly expressive mise-en-scene and the other significant factor is Esom’s phenomenal, instinctive performance. Even though Miso’s choices in life appear to be odd, Esom’s bittersweet smile and resilient looks never allows us to stop rooting for her. The supporting cast is packed with equally good, entertaining performers.

Microhabitat (106 minutes) is a vibrant small film with a big heart that discerns the fault lines of an urban society through a deeply poignant, nonjudgmental gaze. It’s an ode to the tough, independent people who holds onto to their dignity even in the face of dispossession and poverty.

“MICROHABITAT” WAS SCREENED AT THE 2018 FANTASIA INTERNATIONAL FILM FESTIVAL.
CLICK HERE FOR OUR COMPLETE FANTASIA COVERAGE.

In the Mouth of Madness [1994]: Twisted. Trippy. Terrifying.