Prime Video has really cemented their spot in the sci-fi genre by green-lighting a bunch of shows that know how to balance emotional drama and mind-bending sci-fi high jinks. You have Upload (2020-ongoing), Undone (2019-ongoing), The Boys (2019-ongoing), Hanna (2019-2021), and Outer Range (2022-ongoing). And all of them are absolutely fantastic. Now, it seems like they have yet another winner in their hands in the form of Night Sky (2022-ongoing).

Created by Holden Miller and Daniel C. Connolly, the eight episodes of Night Sky are directed by Juan José Campanella, Philip Martin, Shari Springer Berman, Jessica Lowrey, and Robert Pulcini. The show follows an old married couple, Franklin (J.K. Simmons) and Irene (Sissy Spacek) living in Illinois all by themselves with a massive secret in their tool shed. As shown in the trailer, there’s a hidden pathway leading to a chamber which teleports the couple to an observatory on another planet. That too quite literally. Franklin and Irene’s nosy neighbor, Byron (Adam Bartley) suspects that Franklin and Irene have a secret and he constantly tries to befriend them to know their secret. Things get chaotic when Irene finds a man named Jude (Chai Hansen) in the observatory. A story running parallel to this in Argentina features a single mother, Stella (Julieta Zylberberg) and her daughter Toni (Rocío Hernández). They are trying to live a normal life but a mission thrust upon them makes them realize that things are not going to be normal for them again.

And that’s all the plot-based stuff that can be revealed in this Night Sky synopsis. Everything beyond and around that is spoiler-y in nature and you should discover it on your own. 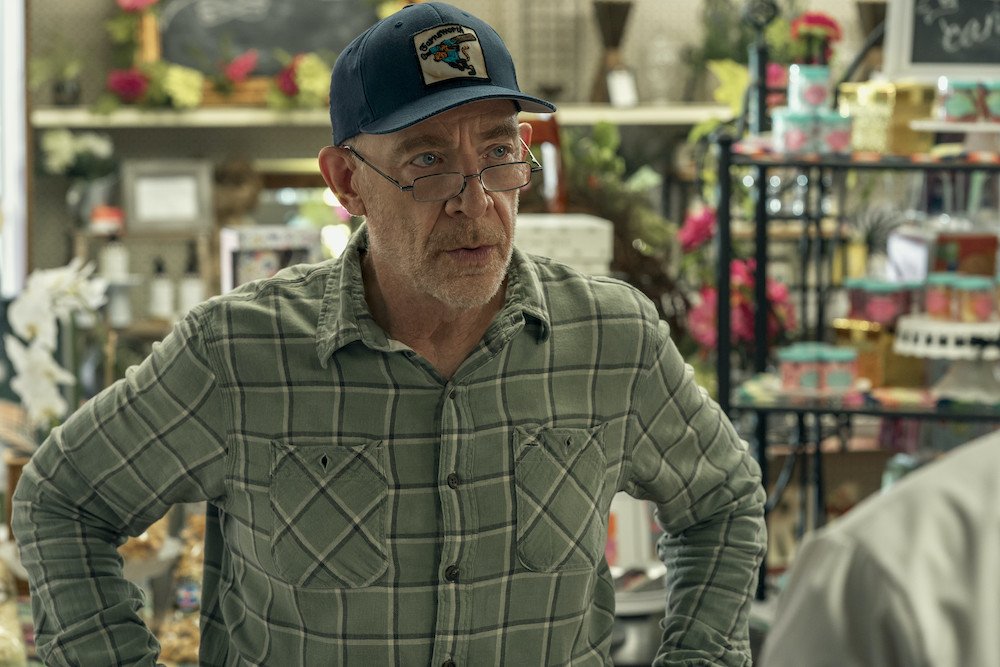 So, the first thing that you must keep in mind while going into Night Sky is that this is a science-fiction drama, with heavy emphasis on the drama. Franklin and Irene’s story is about understanding how much love is left in a relationship when a couple has been together for a few decades. Especially when those decades have been littered with the highest of highs and lowest of lows. What do you do when you realize that, after all these years, maybe the love you’re receiving isn’t proportionate with the love you’re giving? How do you grapple with the notion that, after all this time, you have to keep secrets to prevent your significant other from getting hurt? How do you stop your significant other from finding comfort in a place or from a person who you think is going to hurt them eventually? Above all, when death is knocking at the door, can you choose the time or wither away painfully? These are some of the questions that drive the plot of Franklin and Irene. And it’s explored beautifully by the writers, who ensure that you’ll start crying by the end of their arcs (for Season 1) and go give your aging parents or parental figures a hug.

Jude’s story (without spoiling anything) is about finding parental figures, literally and metaphorically. Most of his backstory is very shrouded in mystery though. But like the science-fiction elements of Night Sky, Jude’s skeptical past doesn’t really matter as his relationship with Franklin and Irene takes the spotlight. So, after a point, you actively start to root for the fact that Jude’s past never surfaces and the bond he is forging in the present with Franklin and Irene gets stronger and stronger. Now, that is powerful storytelling. Stella and Toni’s arc is equally engaging. To explain it in the simplest terms, it is essentially Lady Bird (2017) in a sci-fi setting. And the reason why that comparison is valid is because of the prominent presence of faith and religion in the mother-daughter relationship, albeit in a different way as those two elements are used by Stella to distract Toni from her legacy. However, since the revelations around Stella’s past and her profession are inevitable, the very fabric of Toni and Stella’s kinship is put to the test.

As for the sci-fi element, which revolves around teleportation (for now), Night Sky is a commentary on how humanity deals with the unknown. They turn it into a form of religion, dissect society into pieces, appoint “leaders”, and then seek to discriminate.  A very cursory look at the how Franklin and Irene use the chamber versus how others (who shall remain nameless for the sake of spoilers) use it will lead to the conclusion that it’s a peaceful versus non-peaceful use of a device way beyond humanity’s current scientific capabilities. But it also shows how selfishly somewhat rich, privilege, White people will use a game-changing system instead of thinking about the many ways it can help those who are not as fortunate as them. Meanwhile, those who aren’t as rich or as privileged or as White as Franklin and Irene will tear each other apart in the search for godliness. Furthermore, it also veers into the topic of settlers and immigration, thereby enriching an apparently simple sci-fi plot device.

From a technical standpoint, Night Sky is absolutely fantastic. Campanella, Martin, Berman, Lowrey, and Pulcini’s direction has a sense of calmness and gravitas, with a touch of dry humor. The show is a slow burn but things never feel tedious due to the direction, the cinematography by Ashley Connor, Andrew Wehde, and Pablo Desanzo, and the editing by Josh Beal, Sharidan Williams-Sotelo, and Joe Giganti. Every shot is composed, color corrected, and allowed to simmer long enough to settle in your brain, with so much care that the aforementioned people deserve a round of applause. The production design, costume design, art direction, set design, practical effects, and visual effects are pretty top notch as well. That said, things get a little wonky in the finale. A lot of it is due to the writing trying incredibly hard to bring a lot of plots and subplots to an emotional and logical conclusion, while setting up future stories. But, for some reason, the cinematography and the editing take a disappointing nosedive. Therefore, if you feel that the show lets you down after you invested so much into it, don’t worry, it’s not your fault.

RELATED TO ENCOUNTER: 10 BEST SCI-FI MOVIES OF THE DECADE

There’s obviously no doubt here that J.K. Simmons and Sissy Spacek knock it out of the park. They bring this unique and yet familiar blend of vulnerability, uncertainty, skepticism, love, care, sadness, hope, and more. But, given their talent and experience, that is cake-walk for them. Comparatively speaking, the difficult part is convincing us that they’re playing two characters who have been together for around 50 years. And they do that with so much ease that it’ll take you by surprise, while making you want to hug the two for being immensely adorable. The supporting cast is equally brilliant. It must be daunting to act alongside such veterans of this profession. However, the level of comfort and confidence they exhibit in every frame they are in is commendable. Chai Hansen gets to do the most and he is brilliant (can’t reveal why because it is spoiler-y). Adam Bartley, despite feeling like the antagonist, becomes a lovable figure. Julieta Zylberberg and Rocío Hernández don’t even seem like they’re acting. They actually seem like a real mother and daughter on a road-trip. Kiah McKirnan’s Denise is under-written but she makes the most out of it. Piotr Adamczyk is terrifying. Stephen Louis Grush, Lowrey Brown, Lily Cardone, Beth Lacke, everyone is simply great.

In conclusion, watch Night Sky with an open mind and let the emotions flow through you instead of expecting some over-the-top, science-fiction-heavy flourishes and then miss out on its tender moments. There is a scene in the show where J.K. Simmons’s Franklin says that what matters most in life are the people who love you back for loving them. Everything else is secondary. That is one true statement which can be applied to one’s life. But it’s also synonymous with the show’s ethos as it prioritizes relatable human emotions and relationships over space-travel and teleportation. The sci-fi elements are there to merely complicate the drama between the characters and maybe nudge them in a direction that’ll shine a light on their true nature. If that’s not reason enough for you, check out Night Sky for the legends, J.K. Simmons and Sissy Spacek.

Night Sky streams on Prime Video from May 20.