A relatively-new director on the rise, Robert Eggers’ previous works have commanded a tantalising and fantastical charm over the audience. The Northman (2022), his third feature film, pans out like an epic. It is grand, gory, and divulges into the heart of Scandinavian folklore. With his storytelling skills, he produces an approximately 140 minutes-long piece of spellbinding, bloodthirsty art.

The tale is as old as time. There lived a king with his queen and young son, Amleth (played by Alexander Skarsgård). One day, the king’s brother assassinates the king and takes over the kingdom. Amleth, who flees and finds rank in a group of Vikings as a berserker, suddenly remembers the call of duty – to avenge his father’s death and rescue his mother. The pagan period horror that marks his debut directorial feature, The VVitch, comes hand-in-glove with a version of the story we have most popularly heard in Shakespeare’s play, Hamlet. In fact, the writers of the film, Eggers and Sjon, have borrowed directly from the lore Shakespeare used to write Hamlet. The result is a beautifully shot film, grand in scale and with an emotional simplicity that helps us ponder on complex ideas of revenge, heroism, and toxic masculinity.

While The VVitch and The Lighthouse, both directed by Eggers, are perfect entry points into familiarising yourself with the director’s notions of horror, we have curated a list of six films for you to watch afterwards if you like The Northman. These films are old-world myths or epics, filmed on a lavish scale, possessing the same old hints of jealousy, bravery, and revenge in men. All of them are set in the backdrop of un-yielding wilderness. Happy Reading! 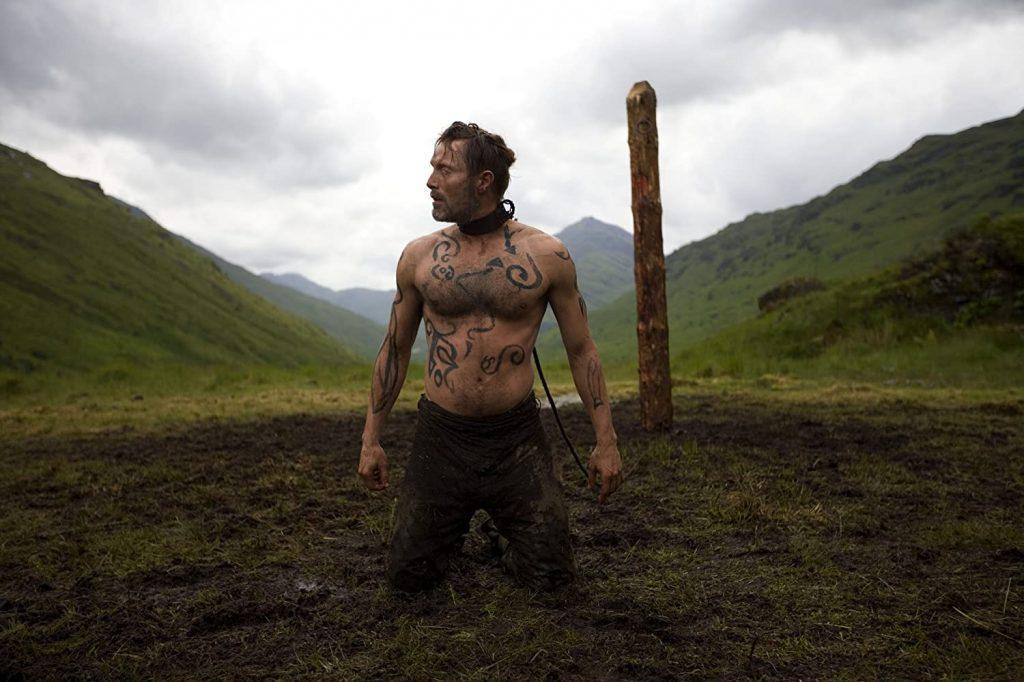 Directed by Nicolas Winding Refn and starring Mads Mikkelsen in the lead role, this is a Danish period adventure film that came to my mind right after I had finished watching The Northman. It is shot in the Scottish Highlands, giving it the feeling of a dense, atmospheric odyssey. It plays out episodically in the Middle Ages in Europe when a mute slave and Norse warrior, called One-Eye, stumbles into a party of Vikings out in search of Jerusalem to conquer it. There is mud, blood, and a lot of soul searching in this abstract expressionist enterprise; the film sometimes appears to sacrifice the story at the altar of visuals. The film is brutal and unforgiving about the nature of primal violence that intersperse this story, just like The Northman.

Related to The Northman (2022) – Every Nicolas Winding Refn Film Ranked

Almeth’s character quickly recalls the character of One-Eye, both fuelled in their actions by hate. The one-man-army that these protagonists prove to be in the narrative is what keeps us glued to the screen. In both the journeys, these characters find themselves in an unusual company – the Slavic slave, Olga (played by Anna Taylor Joy) and a young boy, respectively. Although Valhalla Rising unfolds against the backdrop of a society transitioning from Paganism to Christianity, the desolate and vast hilly landscape is starkly similar to The Northman. This movie is just the right watch to help you bask in the afterglow of the formerly-mentioned stunning period drama, with a bonus of perspectives on religion and nation-building. This Vishal Bhardwaj directed Hindi-language drama starring Shahid Kapoor and Tabu as protagonists is a remaking of Shakespeare’s Hamlet. It is one of the finest adaptations of the story contextualised during the period of insurgency (the late 1990s) in the modern Indian state of Kashmir. Haider is the son of Iklaque, a pro-separatist and militant leader killed in a shootout, and Ghazala. Upon arriving in Kashmir, he starts to believe that his uncle, Khurram, had a role in his father’s misfortune and pursues him for revenge. It is, in equal parts, a commentary on the state politics and the mental torment of a man grieving his loss but fuelled with a sense of revenge and hatred. Sounds familiar, right?

While there are several other Hamlet adaptations, this one is a personal favourite and a perfect double-bill for The Northman because both the films blur the lines between the right and the wrong in the course of the narrative. How we enter the film, sympathising with our Hamlet-like protagonists, Amleth and Haider, starts to sway when we then learn about the real circumstances that led up to the harrowing tragedies of the fathers. We also wonder how much the dysfunctionality of a family can shape a person’s memories. More importantly, what does revenge beget? Ghazala has an answer for Haider and us. More violence, a ticking time-bomb in the air, murderous intentions, and unfortunate deaths nestles in the lap of a snow-shrouded Kashmir in this beautifully haunting film. The setting gets dramatically arid by the end of both films. Unlike Haider’s lover, Arshia, Ogla is an accomplice in Amleth’s crimes and his saviour. Haider is a fitful third film in Bharadwaj’s Shakespeare-adaptation trilogy and a perfect dessert after a meal comprising The Northman. Written, directed, edited, and produced by David Lowery and starring Dev Patel as the protagonist, this film is based on the popular 14th century chivalric romance, Sir Gawain and the Green Knight. A part of the Arthurian legends, this film follows Sir Gawain, who receives and accepts a challenge from the Green Knight one Christmas at King Arthur’s court to travel to the Green Chapel the following Christmas. There, the Green Knight would reward him with his share of decapitation as part of the challenge. The journey he makes is surreal, blending ash, fog, greenery, and snow to transport the audience into a dream-like experience of the Middle Ages in Europe. It almost casts a trance on us, making the runtime feel poetically short and offering myriad interpretations of the journey, including the study of masculinity, and man’s place in the grand scope of history. The journey becomes a metaphor for spiritual and moral transformation, among others.

When Amleth breaks into a dream montage before securing the sword, it harks us back to the dream-like encounter that Sir Gawain has at the Green Chapel. Both the films are centred around legends of epic scale. Amleth and Sir Gawain also take on these momentous journeys upon themselves, at the end of which lie a desirable social position of power for both of them, requiring them to display their masculine strengths in society. The atmosphere in both films contributes to the interpretive process of myth-making as much as possible. However, The Green Knights present us with more intricate storytelling than The Northman’s straightforward method. Both can be companion texts to understand the oft-perceived connection between courage and masculinity in a patriarchal setup. Directed by Alejandro G. Iñárritu and starring Leonardo DiCaprio’s Oscar-winning performance, this film is loosely-based on Michael Punke’s titular novel inspired by the poem, The Song of Hugh Glass from the early 20th century. The story of Hugh Glass, a frontiersman, is stuff for legends in American history. The film follows him leading a party through the Dakota wilderness in 1823, where he is left to die after being injured badly in a bear attack. Fuelled by the desire for revenge, he consequently seeks out the party which had deserted him earlier and ensures that he receives what he set out for, but at the cost of what?

Our protagonist here is again quite similar to Amleth, a lone wolf who holds tights through all odds, snow and rain respectively, to undertake a death-defying journey for revenge. The singularly-driven motivation for revenge in both the films offers itself up for contemplation about whether or not it is the most accurate way to confront the ones who have wronged you. As evident, this instinct is primal and shared among men across history. The snowy and mountainous landscape with a never-ending horizon contributes to building the context of this struggle for justice in Hugh Glass’ tale. While The Northman is more centred upon the basic principles governing human society, The Revenant plays out as a classic parable of man vs nature. But if you wish to divulge your aftertaste for revenge and violent struggle between men, this movie can be your go-to. 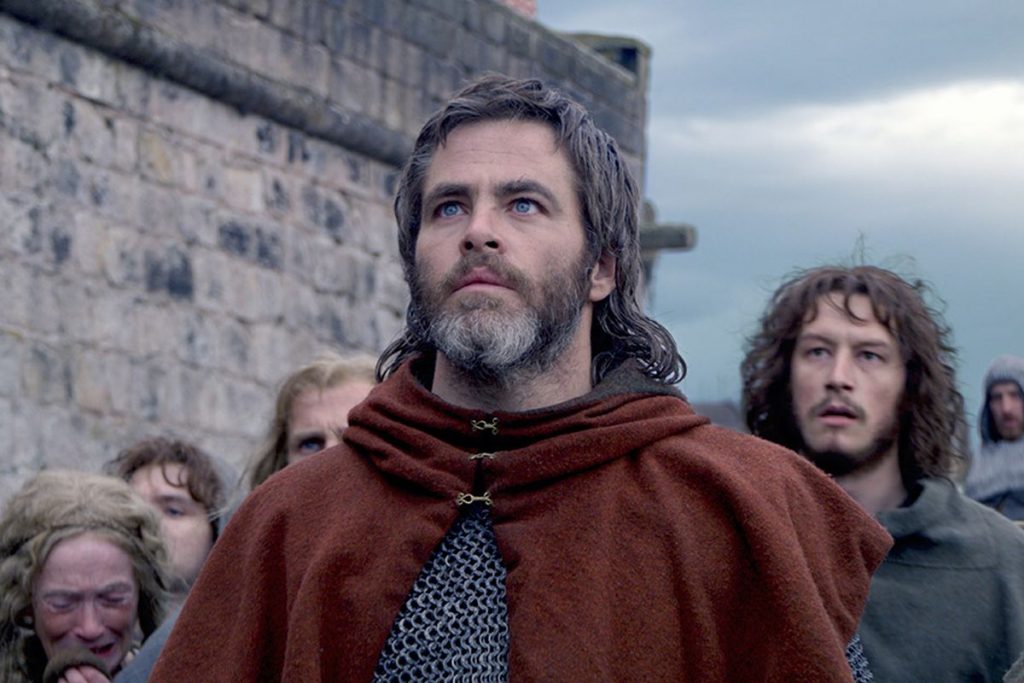 Directed by David Mackenzie, this is a film of epic proportions based on the story of Robert the Bruce, the 14th-century Scottish nobleman who helped secure the freedom of his country from the English rule through a guerrilla war campaign. It also challenges the historical inaccuracies of Braveheart, a 1995 film based on the same theme but following William Wallace’s story more closely by director Mel Gibson; although, much has been said about Outlaw King rushing its audience through a jumbled-up timeline in pursuit of portraying the life of Robert the Bruce. The legend framed by this film is well-webbed with revenge, betrayal, and pursuits of love, reminding us immediately of The Northman. It swings between elaborately shot action scenes in battles to quiet chambers and beaches, aiming for a hard-to-achieve balance between the protagonist’s personal and political lives. It is difficult to deny the impact Braveheart had on the popular imagination; this film could be a perfect sequel watch to Braveheart, helping you relish the lingering taste of unfiltered rage and revenge from The Northman.

The violence in both these films is portrayed mercilessly, on a grand scale, and shot carefully with attention to detail. The directors have not missed out on depicting the period they are set in. Bruce’s romantic interests tend to influence his political life, just like Amleth’s concern for Olga renders him into the clutches of the enemy. It is interesting how the women become the focal points of decision-making for the men in these narratives. A subtext about the kind of personal sacrifices that a hero of this stature has to commit to fulfill greater purposes in life rings true for Bruce and Amleth.

Outlaw King (2018) is streaming on Netflix Directed and co-produced by Robert Zemeckis, this film draws heavily on its source material, an Old English epic poem by the same name. It is believed to be one of the most widely read and translated epics and among the best works of Old English and European vernacular literature. The story is set in 6th-century pagan Scandinavian society, when Beowulf steps in to help King Hrothgar of Danes to defeat the monster Grendel and his mother. We follow his journey through brave acts to his kingship and subsequent death. It is an unlikely recommendation because Beowulf is 3D computer-animated, making it look like The Polar Express (2004), so the blood, gore, and atmospheric horror are all toned down into an old-school video game vibe, making the film a fit watch for children and teenagers. The real epic is full of primal savagery that even English Literature students receive a trigger warning before diving into the text.

Both the films are set in pagan Scandinavian societies with a singular protagonist, Beowulf and Amleth, respectively, coursing their way through history heroically. The respective narratives offer a scope to understand contemporary society, as a whole, especially with Eggers’ careful assemblage of details about huts, clothes, pots, and pans. Interestingly, Beowulf is not hero-worshipped in the film and the epic. Instead, it lays bare the hero’s flaws and makes him human, which is what The Northman does with Amleth’s character too. There is philosophising on mortality to look out for as well.

For All Mankind (Season 3) Episode 4: Recap and Ending Explained