“Kill your darlings” is a phrase attributed to William Faulkner, advising writers to resist overuse of their favourite expressions, tropes, characters, etc. This is true for any writing, wherein emotional proximity to the work might manifest into myopic creations in the grander scheme of things. However canonized this belief is, the hypothesis falls apart for Nicolas Winding Refn.

Armed with a style that has only grown more distinctive with every new film, Refn explores fundamental themes and deploys the camera to shift between fluidity and limbo. With sensibilities similar to a master architect, Refn uses frames to create moments that let the viewer internalize, and experience on a physio-psychological level, a creation that does not confine itself to a two-dimensional rectangle, but reminds you of what was felt while watching it. This is the moment the Nicolas Winding Refn effect kicks in, and this is when cinema affects one on a deeply personal level. 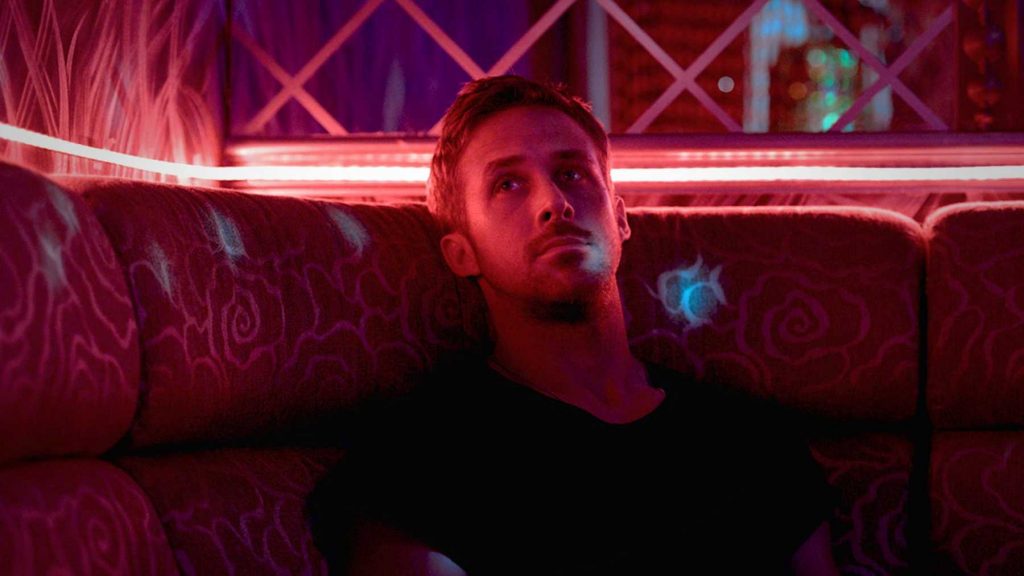 Any film dedicated to Alejandro Jodorowsky ticks the boxes for surrealism and subversiveness. “Only God Forgives” is surreal, trance-like, trippy, and all the other good stuff. In this revenge story, Ryan Gosling plays Julian, a drug dealer and Muay Thai boxer with rationed dialogue and minimal body moment. He is inhibited, layered, complex, like a jumbled Rubik’s cube with no easy solution.

Most of the film is similar. No easy explanations, no simple sequence of events, no predictable elements to really understand the characters. On the face of it, it is about Julian looking for the man who killed his brother. Shot in Bangkok, parts of the film feel like an Orientalist’s view of exoticism and mysticism, but the juxtaposition is effectively inducing a surreal narrative. 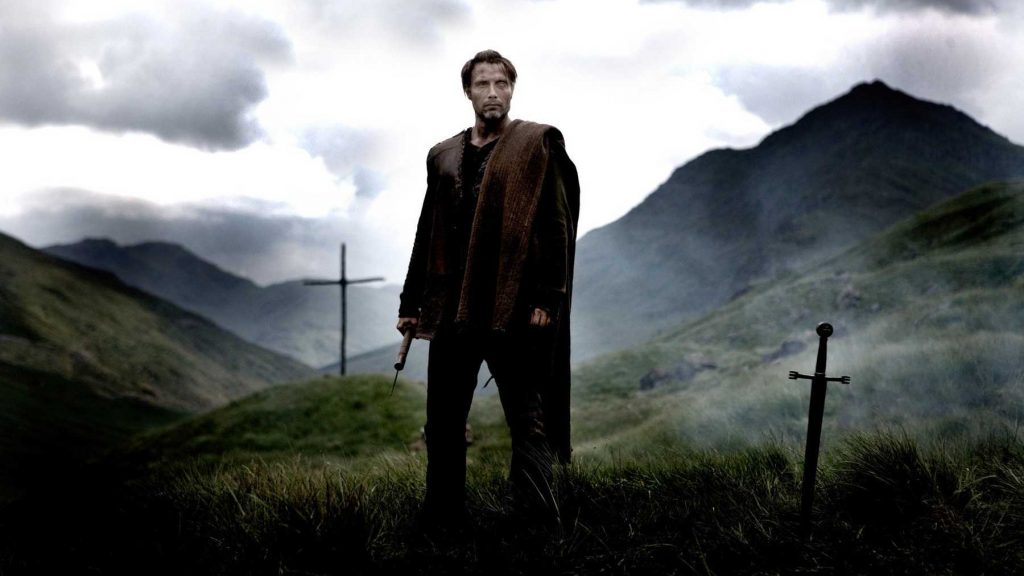 This film is packed like tree rings, winding in and out with varying degrees of stiffness. The initial part of Valhalla Rising is a cinematic essay on theism, a Norse warrior’s (Mads Mikkelsen) journey with a group of Crusaders, who hope to find the Holy Land. But gradually, there is a shift from the linear plot of mythology and paganism, and the film becomes an unsettling, philosophical mixture.

The raw brutalism in the film is shocking and aesthetically enriching at the same time. The anatomical butchering, apathetic tone, and focus on sinew tearing, beat the physical intensity of most of Refn’s contemporaries, including fellow countryman Lars von Trier. The choreography is reminiscent of the future von Trier product “The House that Jack Built”. Valhalla Rising uses physicality, deformations and pain to reflect on the nature of fundamentalism and to establish an anti-thesis against belief systems. 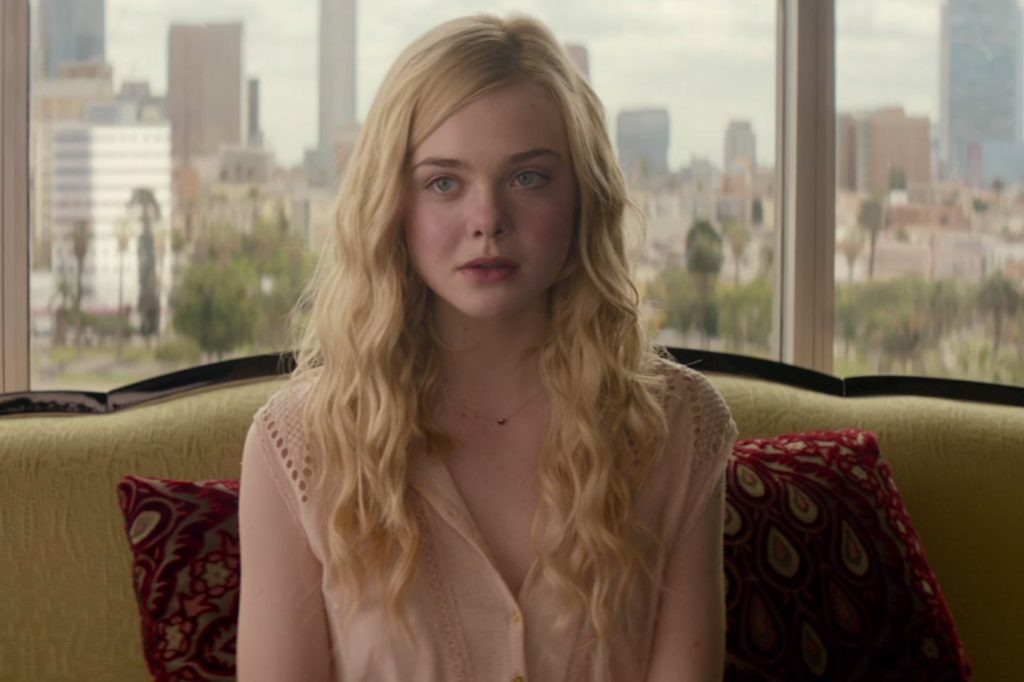 Refn’s latest celluloid venture is the pensiveness of fashion and form. Art here is a mirror for the progression of an individual within a society. A dialectic of accepting and acceptance. Are we innately compassionate? And does metamorphosizing into inscribed beings bring out the transgressions of the world? Elle Fanning as an aspiring model, also the model organism for this existential treatise is spectacular in her role.

Also Read: The Neon Demon: Beauty is the only thing that matters

Special points to Karl Glusman as her friend (and not yet full-time romantic interest) for bridging the big-bad world with that of the closed-inner self. Only to be placed some nine thousand kilometres away from the city of love, shades from his scoop-necked character from Gaspar Noé’s “Love” is refreshing to watch.

The form is abstract, but the composition of the human body is not. But when material defines form, what is the form of the material? One of this film’s biggest achievements is the translation of these ideas to screen. 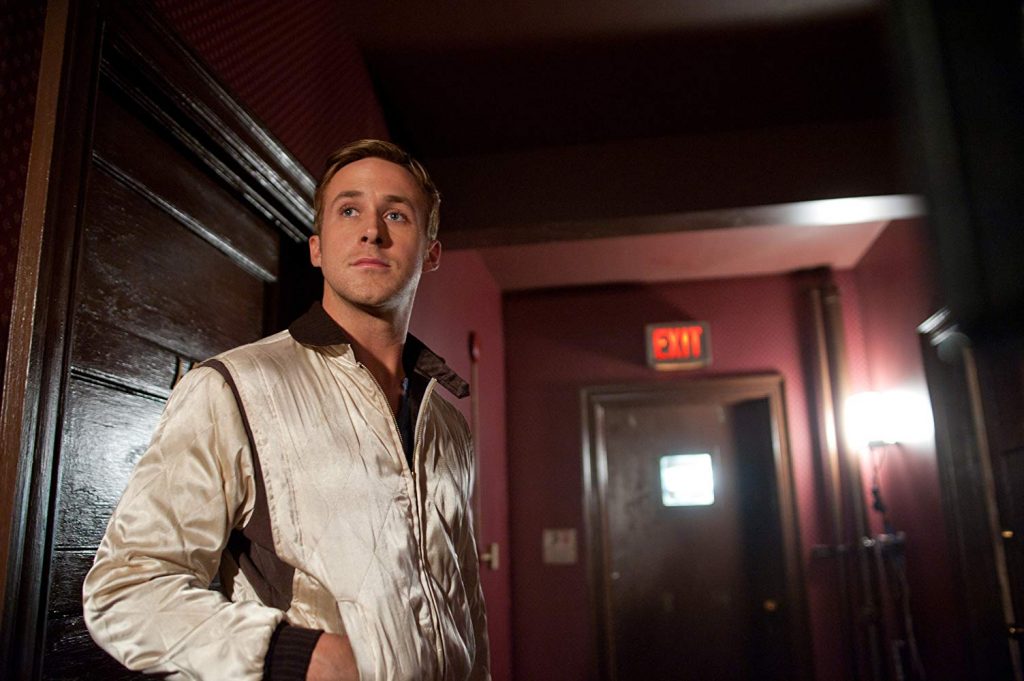 Adapted from the James Sallis book, “Drive” is a meditation on circumstantial actions. The film is linear and gives us enough time to tap into each character’s complexity. “Drive” is like scotch, where each frame sipped and savoured builds up to the finale, telling us more and more about the flavourful world created by Nicolas Winding Refn. In comparison to one of his earliest films, “Bleeder”, “Drive” is about the evolution of circumstantial crime, as opposed to “Bleeder”’s personal individualistic crime.

On some level, this does make the film a crime drama, though the film jumps in and out of the zones of classic Refn limbo-thriller and heist-thriller. Ryan Gosling plays a mechanic / stunt-double / gateway car driver, who gets involved in a robbery and is, among other things, also hopelessly compassionate, while he cares for his neighbour (played by Carey Mulligan) and her kid. The film is an intertwining of crime, family, and circumstantial destiny. 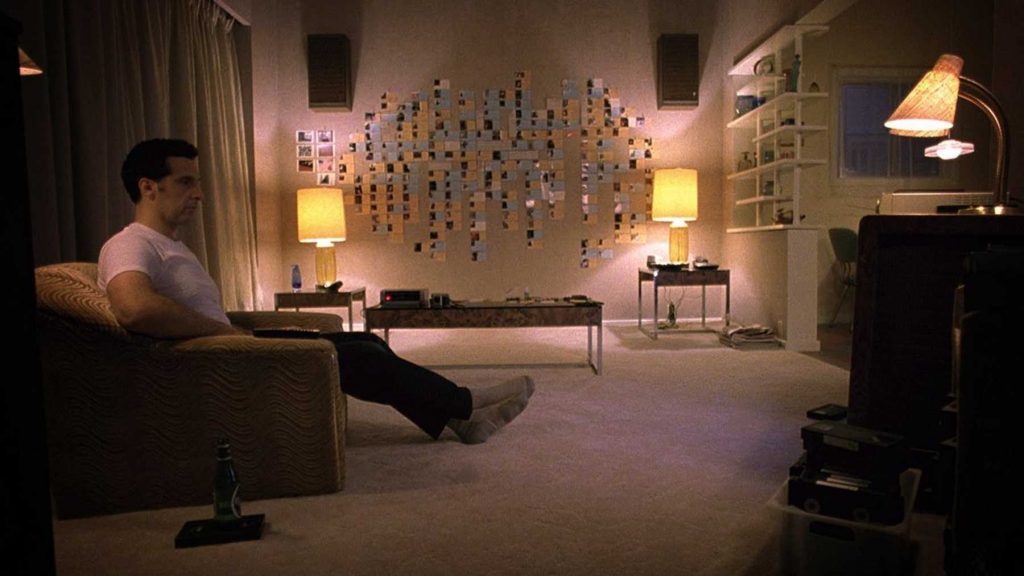 A mall security guard has a tape of a double homicide, in which his wife is killed. While tracking her murderer, through transcendental clues and Lynchian transitions, the film gets into the murky business of the known and the all-knowing versus the unknown and the un-knowing. Clandestine enterprises have their own oomph factor, namely from the whole secrets are sexy vibe, but what happens when the un-knowing gets in on these secrets? What is the truth value of truth post revelation?

Refn explores these dynamics through the security guard, played by John Turturro, and his pursuit to know what really happened. On the face of it, it is a noir-thriller with out-worldly sequences, but there is within it a curtained tale of surveillance, the Benthamian notion of all-seeing-ness, and relative scales of truth. 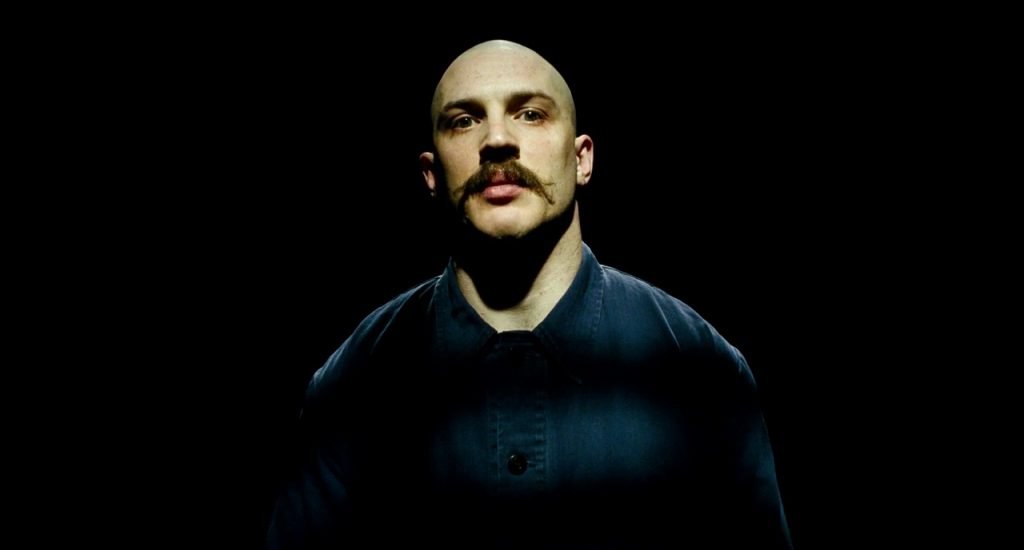 Bronson is one of Refn’s most accomplished works, and arguably his most different film in stylistic terms. Bronson is not just Refn’s accomplishment, but is a defining film for Tom Hardy, who plays the eponymous Charles Bronson, one of Britain’s most notorious inmates.

In the film, the camera is at its non-Dogma peak. Shots are crafted with clinical perfection, and rigs and dollies are aplenty. It is also Refn’s most fun film, with excellent comedic sensibilities incorporated by Brock Norman Brock and Refn’s writing. It is also the easiest Nicolas Winding Refn enterprise to watch; here the surreal jumps are the backbone to the superb humour and exaggerated humanism. 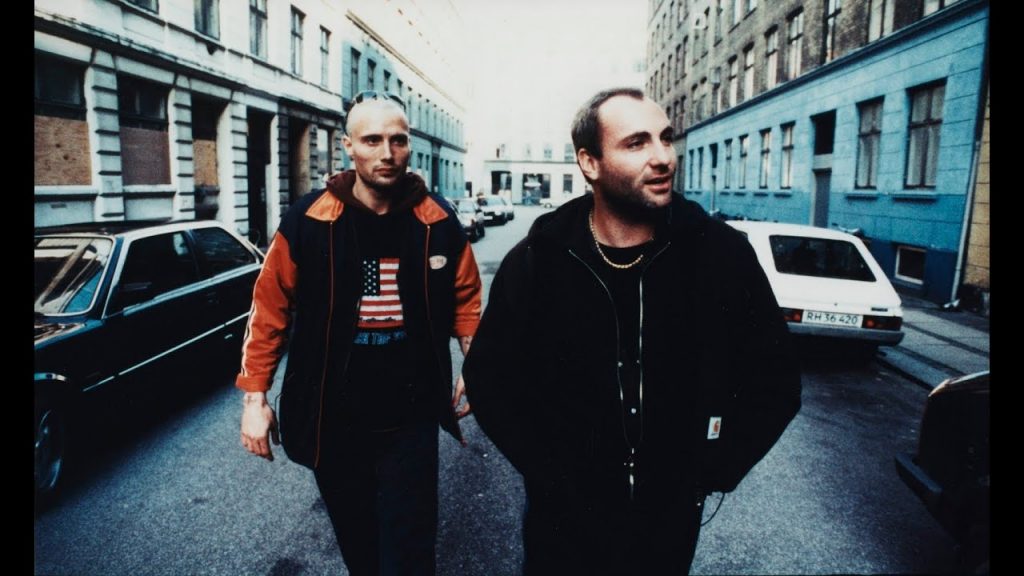 Though initially planned to make just the first film, the Pusher franchise is one of the most consistent film series in the history of cinema. It takes through the anatomy of the drug underworld – producers, dealers, and users. All the three instalments have bleakness as a common theme, with grim characters looking for ways to backtrack and get a grip over their lives. The first film follows Frank, played by Kim Bodnia, who after a couple of bad deals, ends up having a big debt to repay his boss. The second film is about Tonny (Mads Mikkelsen), who was Frank’s sidekick, and has returned after serving time. The third film follows drug lord Milo (Zlatko Burić), a recovering addict himself, who gets involved in a messy deal. Milo was Frank and Tony’s boss, and the trilogy rounds up the power structure to provide an individualistic point of view while keeping the hierarchy intact. With this, we are able to see how their lives intersect, and how each interaction feeds ripples back into the twisted dynamics.

The reason for clubbing all the three films together is the effectiveness it brings when given the same treatment apiece. Stylistically and rhythmically, the second and the third instalments are very similar to Refn’s directorial debut, with a free camera that follows the lead for most parts of the film. The Pusher films are an almost Linklater like equivalent for inspection into the psyche of the drug underworld, with a succession of hierarchy of just starting out, getting back to getting big, and a destined eventuality. 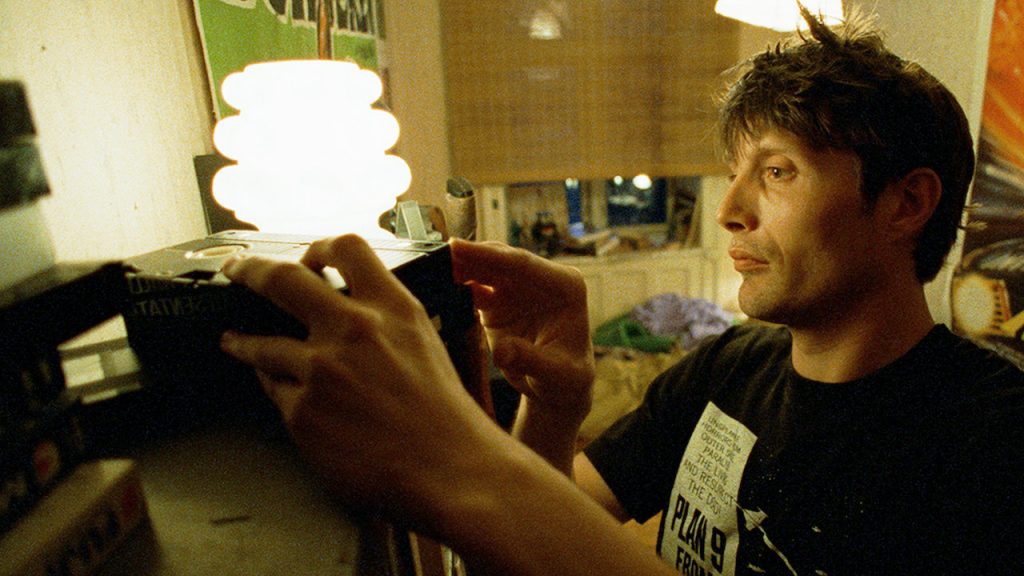 This film is a crystal ball sprinkled with instances that lead to Refn’s future projects, and his stylistic and cinematic inspirations. Bleeder revolves around a group of people, each of whom have their own lives, but are connected by films. There aren’t many films which establish the personal basis for crime. How does crime manifest at an individualistic level? How is a person who commits anti-societal acts come into being? It is very interesting to see the evolution of the criminal dilemma from the ground level.

Bleeder is a fantastic introspection into such a mind, and their ramifications for the immediate society. The film is also cyclical in nature, and describes the beginnings of relations, the eventual monotonicity, and how society dictates personal basis.

August (Agosto): 'TIFF' Review - A merging of adolescent and adulthood crises and realities