Indian independent cinema is making great strides when it comes to documentary filmmaking. From recent Sundance breakouts such as Writing with Fire (2021) and All that Breathes (2022) to the Cannes-winning A Night of Knowing Nothing, the success stories only keep increasing. The medium itself is crucial because while reflecting the nation’s realities in a reasonably straightforward manner, they focus on the right people and the right things. And Dreaming of Words, a mid-length documentary by Nandan, might just be the latest addition to the list.

But the focus of the documentary is not a milieu or an institution. Instead, it is about the incredible achievement of a middle-aged man. But the latter’s ambition is so vast and important that it becomes bigger than himself. Through a concise 1-hour running time, the film aims to focus only on his rich legacy and impressive body of work. The man in the picture is Njattyela Sreedharan. Originally from the Thalassery district of Kerala, he is a lexicographer. Sreedharan, after he retired from the Public Works Department, compiled a dictionary of four major Dravidian languages.

Related to Dreaming of Words: Writing With Fire

However, there’s a twist in this story of a middle-aged man from a lowly background. He is only a fourth-grade dropout who started off working in a beedi factory. However, his fascination with languages and endless curiosity to learn new words pushed him forward in life. Most of his life was spent traveling through the states of Tamil Nadu, Andhra Pradesh, and his home state Kerala for the fulfillment of this pursuit. He consulted different teachers, experts, and scholars to collect the grammar of Malayalam, Kannada, Tamil, and Telugu. This resulted in an assortment of more than five hundred words.

His credentials and a less-than-impressive background did come off as a hurdle. However, he continued his work with utmost commitment. This put him in the eye of Dravidian media, which covered him extensively afterward. He was acknowledged all around for opening the Malayali doors to other languages as well. The renowned names in linguistics in Kerala also acknowledge the essential nature of his contribution openly. 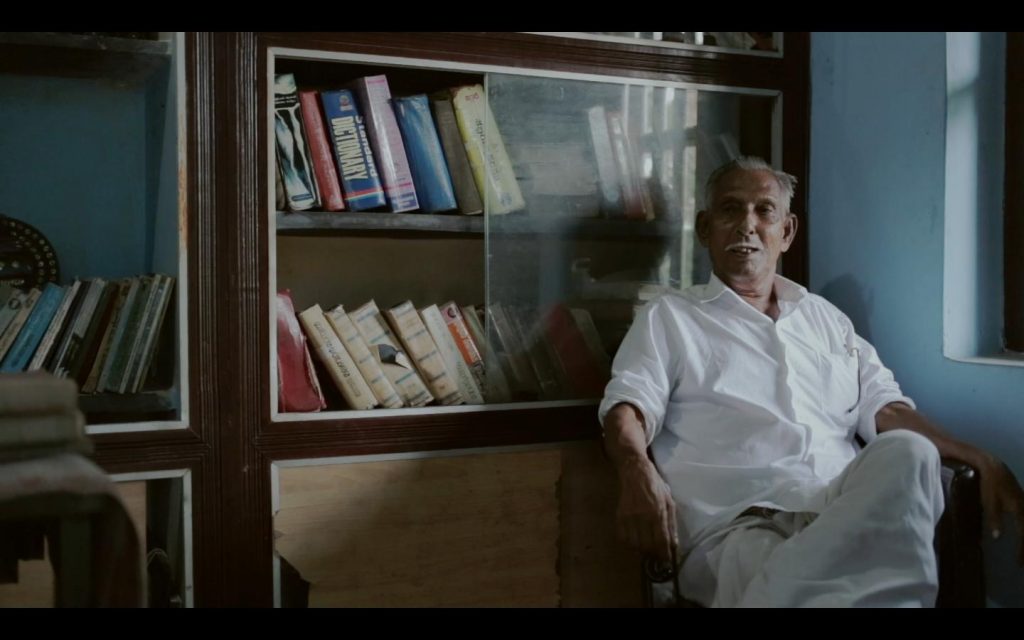 Dreaming of Words follows a rather generic documentary setup. It doesn’t have a definitive visual language. The most it deviates from the interview setup is when it spotlights the newspaper clippings praising Njattyela in various languages. The Dravidian text everywhere is purposefully not subtitled to invite curiosity among the viewers. In fact, it can function well as a stance on the ongoing language debate in India. The rich and diverse assortment of individual scripts and languages ensures that there is little need for a national language. And it is a fact that everyone must come to terms with.

The ordinary nature of the discourse and biography never stops the film from becoming interesting. If you love conversations about language and literature, this is just the film for you. Njattyela inhabits half of the film’s frames, and his passion is evident through his words and smile. Watching him talk about his dictionary reminded me of Jodorowsky talking about his unmade Dune. Of course, they are a world apart from each other. However, the child-like satisfaction of completely realizing something is universal. And this trait also elevates Dreaming of Words from its forgettable form.

It isn’t less compelling to hear the other experts talk about the nuances of language. The selected few subjects are expertly chosen. Additionally, they convey in a more processed form the homegrown and organic texture of Sreedharan’s attempt. One particularly brief but memorable appearance is made by Usha teacher. She’s one of the many people Njattyela met in order to learn languages other than his own. The way the woman describes the old man’s strange passion is offhand but also generous. It’s a warm and human moment in an otherwise information-laden picture.

However, the film really comes to life in its closing minutes. It then becomes an appeal to save the legacy which he has to leave behind for future generations. His book was requested to be accessed by Kerala Sahitya Akademi. However, it has been a while, and the voluminous text remains unpublished. This is not to say that the film attempts its own kind of social activism. But it surely works as a nice touch, offering a purpose to the film’s rich cultural fabric and nuanced commentary.

Overall, Dreaming of Words is not a uniformly cinematic documentary. It works more on informative grounds. However, it doubles up as a relevant exposition on cultural preservation in the form of individualistic education. It can also be viewed on the lines of motivational cinema!