Now and Then (Season 1), Episode 5 Recap and Ending Explained: Apple TV’s latest bilingual offering ‘Now and Then’ is created by Ramón Campos, Teresa Fernández-Valdés, and Gema R. Neira. As the show enters its 5th episode, we see more plot points opening up.

Alejandro and Ana, who were romantically involved, are shown to prepare for a temporary separation as Ana is leaving for a year for an internship. In the wake of the accident, we are told that the five friends knew about Jessica having gotten impaled after the accident as Marcos found out from the autopsy report. They quarrel out of their suspicion towards each other, especially Marcos, who was the one checking on Jessica to see if she was alive, but the fight breaks without any consequences. Pedro is shown to struggle with a guilty conscience and almost confesses to the police about what really happened before Ana stops him by saying that she wants to reciprocate his help to her (Pedro got rid of the ecstasy that Ana had mixed in the drinks) by being there for him. They embrace and it is hinted that keeping Pedro from breaking down and exposing what really happened is part of the reason behind Ana eventually marrying him. At an infant Hugo’s birthday party with his father and Daniela, Sofia is present too, depicting that she had known about Hugo and Daniela from the very beginning.

In the present day, we are shown that Daniela, just before her death, wrote a letter to Hugo explaining that she wasn’t his real mother, what happened to his real mother, about the accident and that she was leaving the money to him as a form of compensation. As she finishes writing it and puts it in the bag of money, a mysterious figure comes to visit her, possibly her killer. The revelation hysterically overwhelms Hugo and in a drunken state, he gets into an accident, the same one as shown at the end of the previous episode.

In the aftermath, Hugo is in a coma while Flora and Belinda come across the bag with five million dollars in it. The money tells them that everyone paid the blackmailer and Belinda suspects Hugo to be the blackmailer, especially since the blackmail messages were sent from his phone. Flora tells Belinda the truth about Hugo and Daniela’s relationship as well as Hugo’s phone call before the accident. 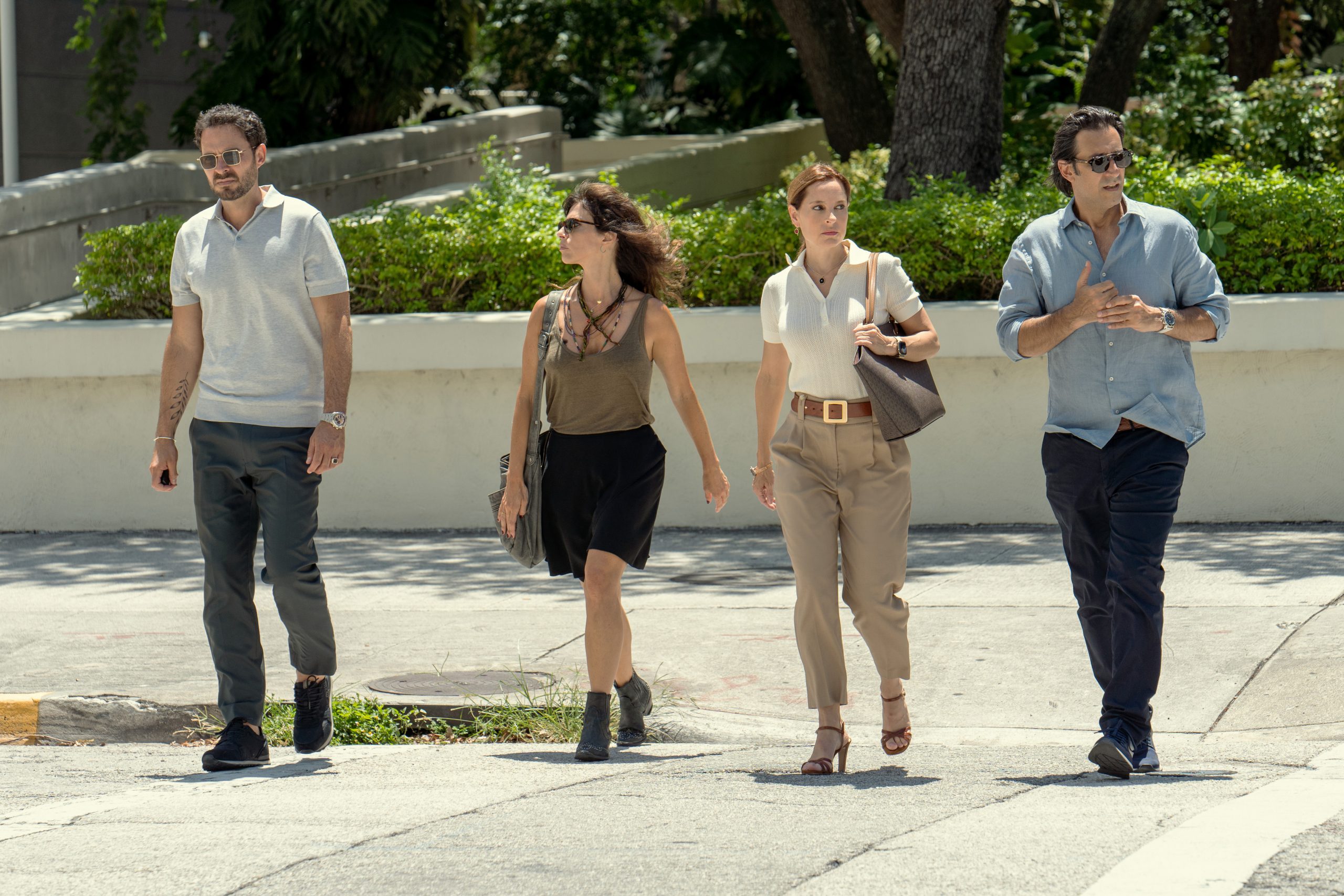 Pedro is being toughened up for the upcoming mayoral debate by Marwen. Ernesto, distraught at his growing marginalization from the campaign, tells Pedro that he needs to hurry up with the two million dollars. FBI officers pay a visit to Pedro’s office asking for all the accounting documents but Ana manages to buy some time by mentioning how worried and busy everyone is with the debate the next day. Marcos and Isabel’s relationship has soured while Marcos has proceeded to threaten his father with a lawsuit to stop him from selling the clinic, with Sofia as his lawyer. Sofia threatens Arturo with exposing his tax haven accounts and this worries him. Back at his place, Marcos is elated at Sofia’s quick thinking, and in the course of the discussion, a reference is made to how he got the million dollars to pay the ransom. Flora, who is listening through the planted microphones, gets a hold of the information but at the same time, she is forced to let Belinda know that the bugging was without a warrant and therefore, illegal. Around this time, as Marcos and Sofia are making out, she discovers a microphone under the coffee table and as they begin a frantic search, they manage to find all the microphones out, hence realizing that the police are onto them.

As Marcos and Sofia aren’t yet aware of the illegal nature of the bugging, Flora uses it to her advantage and brings Marcos, Sofia, Ana, and Pedro in for interrogation, to coerce them into confessing about paying the ransom without revealing the bugging. They all lie that they didn’t. After the interrogation, Marcos tells Ana and Pedro about the bugging which makes Pedro petrified at the thought of having his own house bugged. Except for Sofia, they all believe Hugo to be behind the blackmail and Daniela’s murder.

Marcos arranges a meeting with Silvia, his father’s attorney (as she delivered the ransom to the blackmailer) but instead, Arturo shows up in her place. Marcos tells his father how his apartment was bugged. Father and son reconcile as the former agrees to help the latter against their common enemy, Flora, and in exchange, Marcos is to drop the lawsuit, get rid of Sofia, and settle down with Isabel. He agrees. In the meantime, Isabel approaches Flora about the recordings and on listening to them, is heartbroken to find out that Marcos is cheating on him with Sofia. Marcos’s father, through his network, finds out that the bugging was illegal and so Flora can’t use it as evidence, much to Marcos’s relief.

Right before Pedro’s debate, Ernesto is arrested for doctoring the campaign’s accounting numbers. This comes as a shock to Pedro, worsening his already faulty nerves and dampening his chances as it spreads all over the news. But he manages to make it through the debate, in fact, aces it, without publicly throwing Ernesto under the bus.

After the debate, we find out that Ana gave the FBI officers the real documents, which is what got Ernesto arrested as she couldn’t get the money from her mother on time. Pedro knows this.

Marcos returns home to find out that Isabel has left him. Realizing that his marriage is off and that he has to bear the wrath of his father for this, he takes a large amount of oxycodone. He also doesn’t let Sofia into his house.

Flora’s cancer is possibly growing worse and she is again at a dead end after failing to get any of the friends to confess that they paid the ransom.

In a flashback to two months before Daniela’s murder, she meets Sofia as the latter comes out of prison. They had remained friends throughout the intermediate twenty years and they discuss their financial problems. Sofia tells Daniela that Bernie bailed her out and so she owes him. Begrudgingly discussing how fortunate Marcos, Ana and Daniela have been, while they haven’t, Sofia informs Daniela about the upcoming reunion, stating that it is the ‘right time’.