The home invasion genre has been so crowded with entries, that it has become extremely difficult to subvert it. In fact, the home invasion movies that feature the visually impaired have also become really familiar. From the likes of “Don’t Breathe,” “Hush” to lesser, inspid titles like “Blind“,  there’s nothing really here to play on. However, with the able writing of Adam Yorke & Tommy Gushue, “See for Me” manages to subvert the pathos of the home-invasion genre by playing into the moral complexities of its characters. In doing so, it provides an immersive experience, in spite of a lack of subtlety and familiar narrative turns.

Director Randall Okita opens his film with Sophie (Skyler Davenport) – a blind, young girl who is trying to flee her house. As her mother finds her tip-toeing out of there, we soon learn that there’s some history with her and ski championships. She is stubborn and a little smug about it too. As we move on, we see Sophie taking a cab to a posh, secluded mansion on the outskirts of the town.

Related to See for Me – Poser [2021]: ‘Tribeca’ Review – A volatile dissection of the need to belong

The homeowner is on her way out and Sophie is her last-minute choice for cat-sitting. As she leaves, we see Sophie’s real intentions for choosing to cat-sit rich folks. She is sweeping something out from these homes so as to sell them later. Her friend, who has been helping her up until now, checks out when he gets to know Sophie’s intention of stealing again.

Disappointed and irritated about being locked out by mistake, Sophie finally downloads the “See For Me” App that her mother has been grilling her about. The App allows visually impaired people with a set of eyes on a first-person basis. After a failed attempt, she gets a hold of Kelly (Jessica Parker Kennedy) – an ex-military personal who helps her back in. However, things turn southwards when three thieves break in thinking that the house is empty. 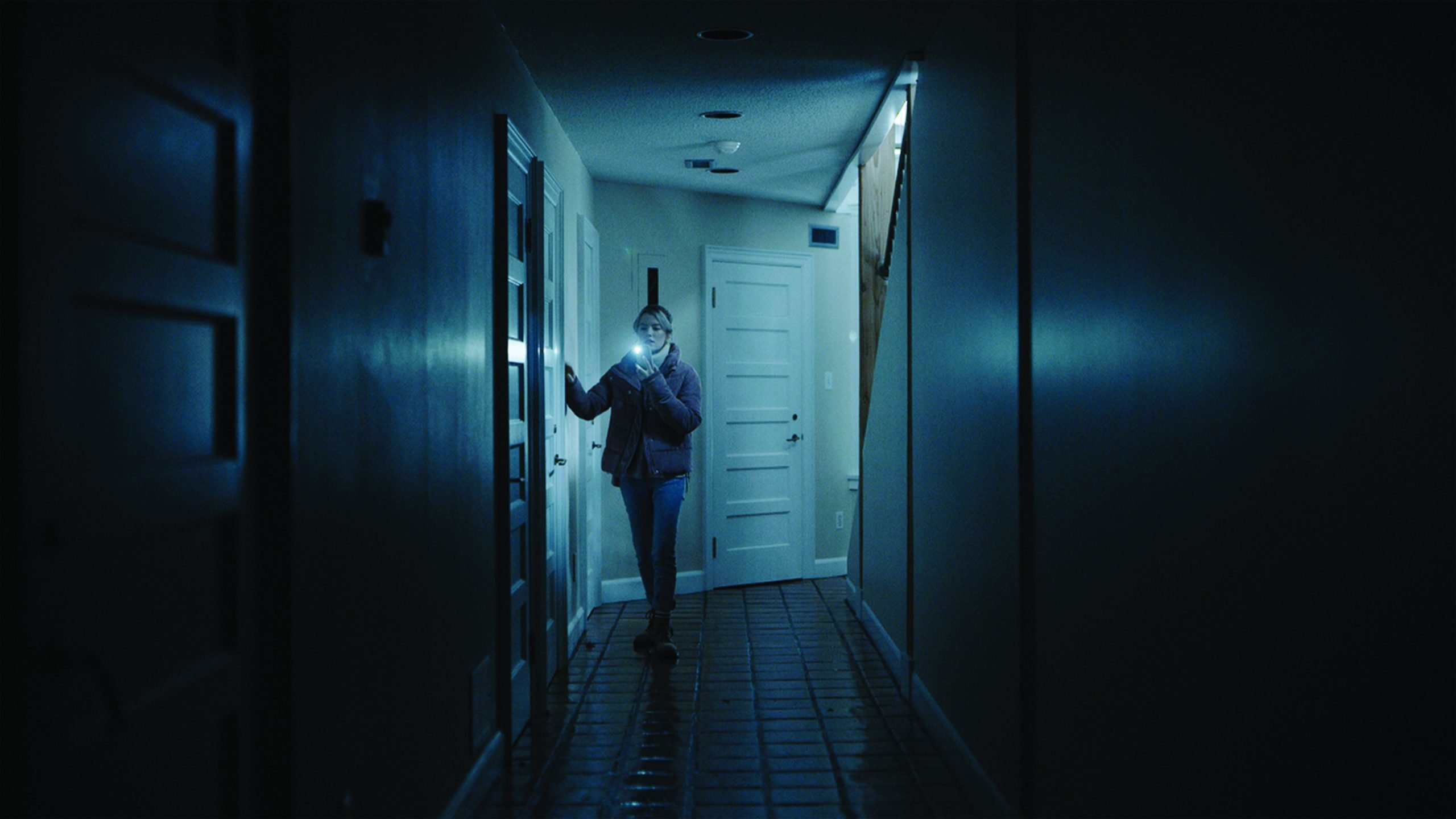 What follows is a pretty standard home invasion ordeal. The twist here doesn’t come from a heroic viewpoint on Sophie’s end. Randall Okita ensures that he doesn’t mislead by making any of these characters extraordinary. In fact, he makes sure that all of them have some kind of negative connotations. Sophie is portrayed as a stubborn, smug girl who steals. Kelly is a helper but her choices to just go for the kill make her character questionable as well.

This is a smart tactic as there simply isn’t much room left in the home-invasion films ( with a visually impaired character) for innovation. Since filmmakers have hit a dead end, the choice of painting the characters grey gives room for a sly cat and mouse game. All the tropes used here are familiar, except the one where the filmmaker and writers subvert the ethos of the victim of the invasion.

Sophie’s morality is pretty wobbly. She goes from being a scared cat to a prowling one within seconds. This unpredictability in her character makes the ambiguity of “See for Me” much more interesting.  There are the occasional lags here and there and some of the character choices seem pretty convenient, but director Okita gives his film a pretty immersive outlook. The cinematography here manages to capture the interiors of the house and the dread that is lurking with great ease. Mostly shot in the night, the lensing makes the thrill quite riveting. Also, a shoutout to the sound design team that makes sure only the right amount of sounds are used in order to keep the experience as immersive as it can possibly be.

That said, the acting here is pretty standard. Skyler Davenport is visually impaired in real life so she gets most of the things right about how such a character as Sophie should act. However, she fails to imbibe Sophie with any kind of subtleness. Her smugness and stubbornness come off as placid and stamped on. The other players are also pretty forgettable. The usually dependable Kim Coates shows up late into the proceedings but he doesn’t manage to stir things up either.

“See For Me” owes a lot to films like Wait Until Dark (1967) & The Shining (1980) and in spite of the smart subversions, it doesn’t manage to be memorable. But that can be said about pretty much every home-invasion film so choose for yourself.