Home»Reviews»OTT»Hotstar»Only Murders In The Building [2021] Review: Cherish this Fresh blend of Investigative Drama and Comedy
Hotstar/Reviews/TV

A great mystery is like an onion peeled one layer at a time. Quite an interesting analogy, and yet, it is quite true as well. Layers need to be unwrapped, and intrigue needs to be built to keep the audience engaged from the crime to the summation. Or else what would keep them interested? Only Murders In The Building does this with aplomb and even manages to throw in a generation gap with amusing exchanges regarding technology, text language, and the inherent human tendency of being unable to let go of the past. Only Murders In The Building even pays homage to a beloved book series that could see a rise in popularity. Or maybe, Hulu did it to build some interest in their own show of the same name?

Having drawn inspiration from fandoms and the rise of podcasts and podcast listeners, Only Murders In The Building focuses on three residents who live in a building called the Arconia in the Upper West Side of New York. Avid listeners of a true-crime podcast, they bump into each other, discover their shared interest, and Voila!: they get to solve a murder in their own building. But how do they decide to present it to the world? The explanation of the show’s name is sweet and quite a telling statement against expansion at the risk of stretching resources too thin. It is best to focus on one thing to one’s best ability. 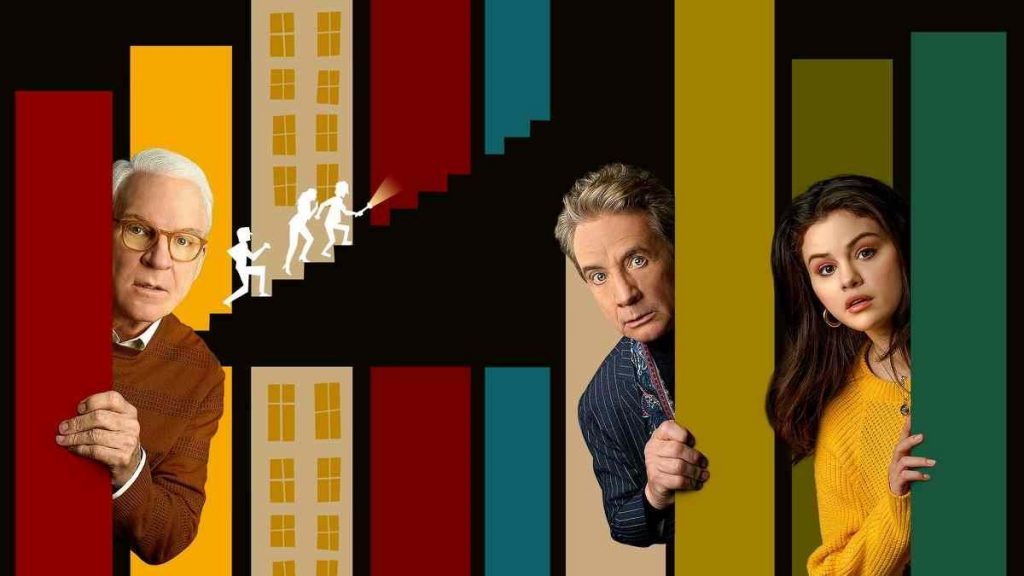 The combination of Steve Martin and Martin Short in their 70s is quite a trip, with the duo sharing the screen space for the first time since their 2018 Netflix special. The addition of 20 something Selena Gomez as their co-sleuth/host is a breath of fresh air. At times, her character of Mabel feels like the mature one before the excitable duo of Charles and Oliver. The three of them are the faces of the show and come across as fans, eager and excited fans who want to peel away one layer at a time and get to the bottom of- Who murdered Tim Kono.

In the pilot itself, Steve Martin’s Charles Haden Savage says, “A great mystery is like an onion peeled one layer at a time.”

Episode one does that. With the show name, and a slight peel to keep us hooked into the second episode. Add that to tidbits from the pilot and we got ourselves a little something to think about. This pattern continues with every episode with a fresh twist. Given that line, it’s clear that the one we suspect will not actually be the ONE, or will they? A line from another of Selena Gomez’s shows can be used in a different context here – Everything is not what it seems.

The writers opted to touch upon the characters’ backstories as Broadway directors and television actors. This results in quite creative detecting processes.

At times, it even seems like they are on a stage. Such as in episodes five and six when characters just enter as if on call. The latter episode even has a moment, one of the better ones about how a particular line is excellent for a particular moment of an episode. However, the exclamation just takes it away. With this, the writers managed to present their thought processes to the true-crime fans/detective wannabes.

Hence, audiences may even get a blueprint as to why their favourite shows do something in a particular way. In some aspects, one can look at Only Murders in the Building as a parody in the making of investigative content. In case it may seem like a regular murder mystery, remember the word parody. Hardy Boys fans will undoubtedly have consumed an abundance of such content and may be able to read every possible thing that the show could serve up. However, the light moments help it stand out from the other crime shows. Has anyone ever considered identifying a suspect as something similar to casting for a play?

Only Murders In The Building even touches on the studio pressures on creative professionals. We can witness the fans aspect also here. Does anyone remember what happened with Brooklyn 99 after season 5?

Stream Only Murders in the Building on Hotstar/HULU

Episode 7 was one that I really loved. For it managed to give me a glimpse of how the elimination of words can actually be a good thing. Relying solely on background score, messages, and sign language, this episode succeeds in building tension and is a welcome change to this series and many series that rely on episodic narrators to take the narrative forward.

Only Murders in the Building is one show for which I did not have to fast-forward the opening credits as Siddharth Khosla’s music combined with Chavilah Bennett’s animation was quite immersive.

What wasn’t understandable was how three random strangers managed to procure information to make their own murder board. Is there something more to them, a layer waiting to peel?

The thing I didn’t like about this one is the ending. Why can’t shows just end on a high? It’s quite like Only Murders In The Building has set up the Arconia as some kind of Arkham Asylum. How long will they keep squeezing stuff out? Well, the only good thing about this is that certain unanswered questions can be explored. As in retrospect, they did build to a future season midway through season 1 itself. Spot it if you can.

Also, no one will refuse at least five more hours worth of content focusing on Steve Martin, Martin Short, who first appeared on screen together 38 years ago, and the 29-year-old Selena Gomez.

Before lamenting about the success or failure of season 2, audiences should cherish the fresh and unique blend of fans, passion, and investigative comedy of ‘Only Murders in the Building’ that should appeal to multiple generations. Do not miss this one.

Only Murders in the Building | Official Trailer