Directed by Chuck Russell, Paradise City is a crime action thriller set on a tropical island in Hawaii. The cast includes Hollywood stars like Bruce Willis and John Travolta, besides Stephen Dorff, Praya Lundberg, and Blake Jenner. This is the last movie role for Bruce Willis before his retirement because of his aphasia diagnosis. Written by Edward Drake, Corey Large, and Chuck Russell, it shows a son’s efforts to take revenge on his father’s murderers.

In Hanna Coast from Maui Island, the narrative of the film begins. Ian Swan arrives at the seashore, opens his car hood, and takes out the captive inside it. He then calls his son and sends him a voice note, which mentions an old partner of his – Robbie Cole. The rift between Ian and Robbie becomes clear right there through the way he speaks about this old acquaintance. Within moments, several cars swarm in near him. A bunch of criminals get out and start shooting at him. Eventually, he gets shot and falls right into the ocean. 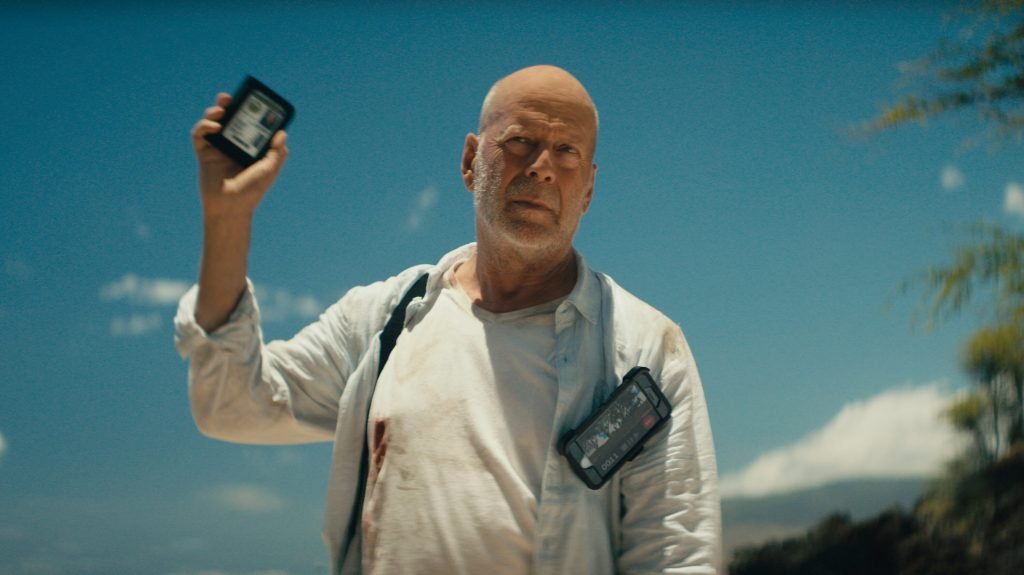 Sometime later, Robbie Cole (Stephen Dorff), a bounty hunter, goes to a shore to get hold of a boxer named Koa Kahale (Laird Akeo). Right after his win in an ongoing boxing match, he takes this young person along with him. However, a local cop – Savannah (Amber Abara), arrives at the spot with two other police officers. She stops him from taking Koa to arrest him herself. During their verbal argument, he starts running away. However, Ryan Swan (Blake Jenner) gets hold of him and helps the cops arrest him on the spot.

That is when Robbie and Ryan meet and share a word or two about Ryan’s dead father – Ian. Savannah joins in and tells him that he cannot proceed with his plan to capture the people behind his dad’s death since he is not a cop. Regardless, he is adamant about doing so. He later sees a dead body with a mutilated face and concludes that his father by looking at his police badge present along with it. When he meets again with Robbie, they speak about a guy named Billford, who had a bounty on his head for his unlawful activities on the mainland. Since Ryan is trying to catch this criminal, Robbie proposes to join and split the bounty 50-50.

Later, we see a lavish party given by Mr. Arlene Buckley (John Travolta). Meanwhile, Robbie and Ryan get into a hotel room and find a snapshot of Billford, who appears like he is dead. Some people start firing into this room, and both start running away and saving themselves. A criminal enters the same hotel room and starts firing right at Ryan, which he evades by jumping down from the 10th floor. Luckily, he falls down, but the assailant gets an order to keep firing to get him killed.

Ryan gets arrested, and later Buckley gets him out of jail. He shares a story about when Ian came to meet him and showed him a picture of Billford (the one Ian sees in the hotel room). When Buckley learns that Ryan is trying to find the people who killed Ian, he tries to persuade him to leave the island through the latest fight to protect himself. He does not reveal in specific what danger Ryan need to protect himself from. When Savannah learns that Ryan met Buckley, she talks about his history of evil contracts where he used their land for financial gain.

She later takes him to a dance bar where the dancers and she tells him about Buckley illegally mining certain parts of the island, among his other ways of encroachment. They plan to help understand who planned the hit at the hotel. Robbie has been missing since the firing instance, and Ryan hopes to find him as well. Meanwhile, Robbie gets to meet Buckley and is annoyed about being kidnapped. Buckley shares a sob story of being seen as a tourist in Hawaii for being a white man, no matter how much he owns in this land. When Robbie does not reveal the information he wants, he orders his hitmen to hit him.

Meanwhile, on their pursuit to find Robbie and the criminals, Ryan and Savannah go to a place like Paradise City. Before reaching there, she warns him about being close to her since the locals would not like the presence of a man from a foreign land. She then rescues him from a few locals who capture him as suspicious. They instantly recognize her as a good individual. When she and Ryan drift apart for a while, he consumes some drugs at the suggestion of a local and sees Ian in person. As a result, he feels that it is a dream. However, Ian is, in fact, alive and stands right behind him.

Later, Savannah and Ryan learn that the locals helped Ian since he was helping them get revenge against the encroacher Buckley. He was taken offshore after getting to shore by these locals and saved. Ian also says that Terrence Billford had undergone surgery to become Buckley to be a part of the cartel. He wanted to make Maui an international drug port. As a result, these three decide to work together against Buck. They soon get a visit from Buck’s people, who kill one of the locals. Luckily, the three manage to escape this place.

They later see Buck destroying another part of the natural habitat for his personal gain. They get enraged and go ahead with their mission to take him down. Savannah and Ryan enter his hotel in disguise, along with girls from the bar. Koa (the fighter) sees Ryan and recognizes him within an instant. Hearing his plan of going against Buck, he alerts him about the possible danger. However, a bad personal history associated with Buck makes him join Ryan in his mission. Meanwhile, Buck promotes senator Kane who supports his evil acts.

Does Ryan get revenge on Buckley?

While covertly trying to fulfill their mission, Buck’s men find Savannah and Ryan, and they get into an intense physical fight. After successfully defeating them in the fight, they run away and, on the way, Ryan and Koa find Ian. Ian sees Koa and remembers a history associated with him. He does not trust this person but trusts Ryan’s instinct about him. Together, they move ahead and, in a room, find Robbie tied to a chair. He and Ian get into a verbal argument about distrust. Robbie had slept with Ian’s wife in the past, creating a rift between them.

However, they decide to finish their mission together against the dangerous Buckley. While Ryan and Ian try to escort Robbie out, Koa enters the room filled with Buck’s colleagues and starts firing. The resulting gunfight results in Ian and Buck pointing guns at each other while Buck tries to escape with his son. Ian reveals the unpleasant history of Buck. He changes his identity to hide from the authorities after killing his wife and being a fugitive. In a particular moment between their verbal argument, Buck finds a chance to shoot him dead.

Right afterward, Buck tries running away on his private boat. Ian shoots him from the shore, but Buck jumps into the water at the right moment. However, soon after, the police find him and arrest him. Later, the head of Paliuli village honors Ryan for donating his share of the bounty for their betterment. Ryan and Savannah also become a couple, and he decides to stay on the land to work for the betterment of the place, unlike the evil Buck. The conclusion is that the destructive lousy person (and an entitled white man) loses, and a good guy wins.