Notes on Displacement is the second documentary film by Palestinian multidisciplinary artist Khaled Jarrar. It follows his journey in September 2015 with a Palestinian-Syrian family fleeing the Syrian Civil War. Khaled Jarrar used forged papers and carried a camera the whole time to document the exhausting, life-threatening journey of Syrian refugees to Germany by ferry, foot, bus, taxi, and train. He takes on the dual role of being both a member of the immigrants and an observer.

Jarrar’s Notes on Displacement can elicit conflicting emotions in us. The global refugee and migration crisis of the twenty-first century has grown to be the largest humanitarian crisis since World War II. On the one hand, Notes on Displacement examines the mix of emotions that immigrants experience while embarking on such a difficult journey. They are ordinary people whose dreams and hopes are dashed in an instant. These people have little or no agency after being violently uprooted from their homes. Jarrar gives us faces and stories in which despair and disorientation are palpable, more so than the media coverage of overcrowded boats and cramped refugee camps. 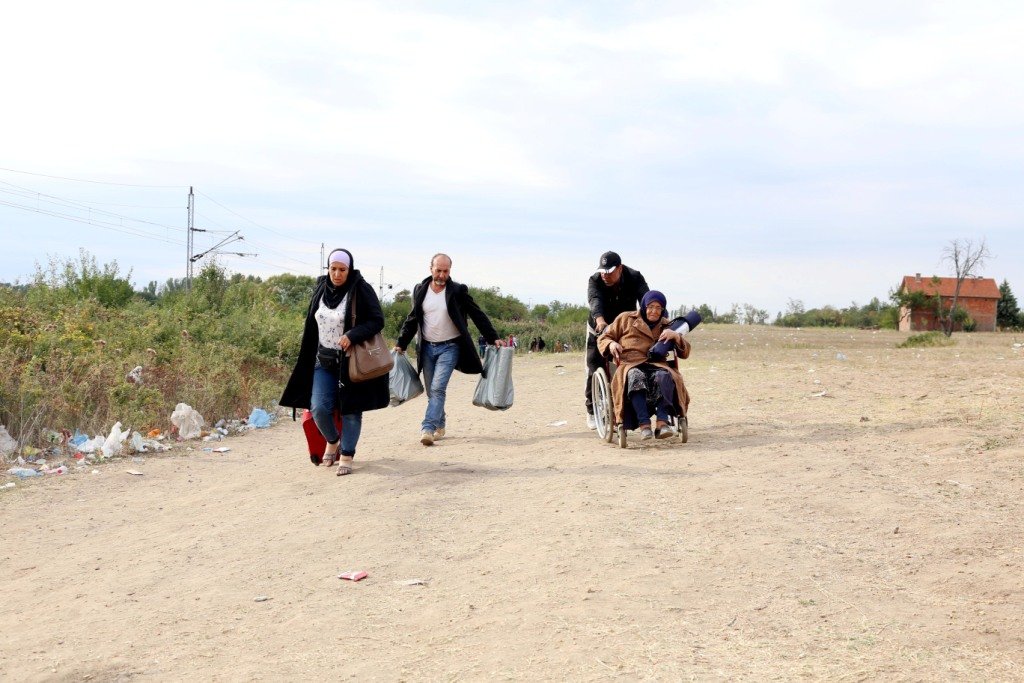 However, questions will be raised about the artist’s reasoning and motivations for taking on such “projects.” It’s difficult for an artist to be both an observer and a participant. Perhaps Khaled Jarrar is well aware of the criticism leveled at his position. After all, unlike the displaced, the artist can return home. In Notes on Displacement, Jarrar keeps a clip of a young man in a refugee camp who addresses the camera and casually remarks, “You are filming us and taking euros at our expense.” Nonetheless, we would not have a deep understanding of what it means to be an immigrant or how dehumanization feels without Jarrar’s notes on displacement that take the form of a moving visual diary.

Fear of the other, fueled by partisan politics, frequently hijacks our basic humanity. Therefore, Notes on Displacement offers an important form of representation that can coerce people and institutions to engage with the crisis and ameliorate it rather than simply erecting barriers and hiding behind them. Khaled Jarrar is also from a region where people are treated as refugees in their own country. Jarrar’s first documentary feature, The Infiltrators, was released a decade ago in 2012. It was also a chronicle of a long road trip. Jarrar’s handheld video camera captures ordinary Palestinians’ daily struggles to gain access to healthcare, education, and other basic necessities.

Similarly, Jarrar tells a powerful story of disenfranchisement and desolation in Notes on Displacement by documenting the chaotic yet limited mobility of immigrants. The documentary focuses on the elderly Nadira Hawary and her schoolteacher daughter Mona. Nadira, 76, is a Palestinian refugee who arrived in Syria as a child in 1948. She and her family lived in Damascus’ Yarmouk Refugee Camp until 2014.

Nadira was once again forced to leave the home with her daughter Mona, son-in-law Yousif, and son Mohie. The family arrived in Istanbul, Turkey first. They had to take a perilous boat ride from there to reach a Greek island. The island of Mytilene would be one of the many stops for Nadira and her family before arriving in Germany. Mohie was a university professor and looks deeply distressed. He has left behind his wife and eighteen-month-old son in Istanbul because he didn’t want to risk their lives on a dangerous boat ride to Europe (dubbed “death boats” in the media).

The desire for dignity and peace has driven these people to flee their bombed-out countries. Hence, the emotional crux of Notes on Displacement is Nadira’s moving life story. Khaled Jarrar joins Nadira and other Syrian immigrants just before a tense ferry ride to Athens. After walking several kilometers in the dark, they are smuggled to the Macedonian border. The immigrants are then placed on an overcrowded train and travel for several days, fighting hunger and hopelessness, before arriving in Serbia.

They travel from the Serbian border to Belgrade, and then take another bus to Hungary. After a long day of walking, the people are detained for a few more days inside leaking tents. Cold weather, heavy rain, food poisoning, dehumanizing conditions at the camp, and the authorities’ indifference. The journey is marked by one setback after another. Nadira, Mona, Mohie, and many others seem to be moving for days. Yet they are also stuck in limbo which deprives them of dignity and hope.

The reality for many displaced people may be far harsher than what Jarrar experienced and observed in Notes on Displacement. At times, it appears that the people have fled the rage of war-mongers, only to face the border authorities’ quiet fury and indifference. The documentary does, however, end on a hopeful note. Nadira and her family discover that there is light at the end of the tunnel. Jarrar brilliantly opens and ends Notes on Displacement in a playground in Germany. Children of the migrants scale a mound at the playground, symbolizing the fresh challenges of those who have reached their destination. We are eventually left with moving crayon drawings of a young girl named Maria who has drawn her entire journey from Syria to Germany. In fact, a child’s artwork raises more questions about the world we live in than desensitized news reports.

Notes on Displacement Premiered at the 2022 IDFA Film Festival