Directed by the brilliant Jean-Luc Godard in 1965, Pierrot le Fou (Pierrot the Madman) is a beautiful French New Wave film. Alike Godard’s other creations, this too is full of surprises. The whole 93 minutes is a colorful ride of jump-cuts and unusual camera movements. This, here, is a puzzle.

Right away from the beginning, Pierrot le Fou is a conflict. A conflict between the plot (the substance) and the execution of the film. The simpler the plot, the tangler the execution. The film is exquisitely scattered. The chapters are shuffled which make the viewers perplexed. The panning and zooming-ins are uncomfortable which indulge the viewers. The plot is overshadowed by the execution in every way and this experience creates an internal conflict inside the viewers’ minds.

Also, Read – The Art of Life

Godard’s presentation gives it all the incumbent spice and zing. The camera works are up-close and personal. Raoul Coutard brought it together by making the pastel blue and flaming red color palette dominant. The color symbolisms are eye-catching. 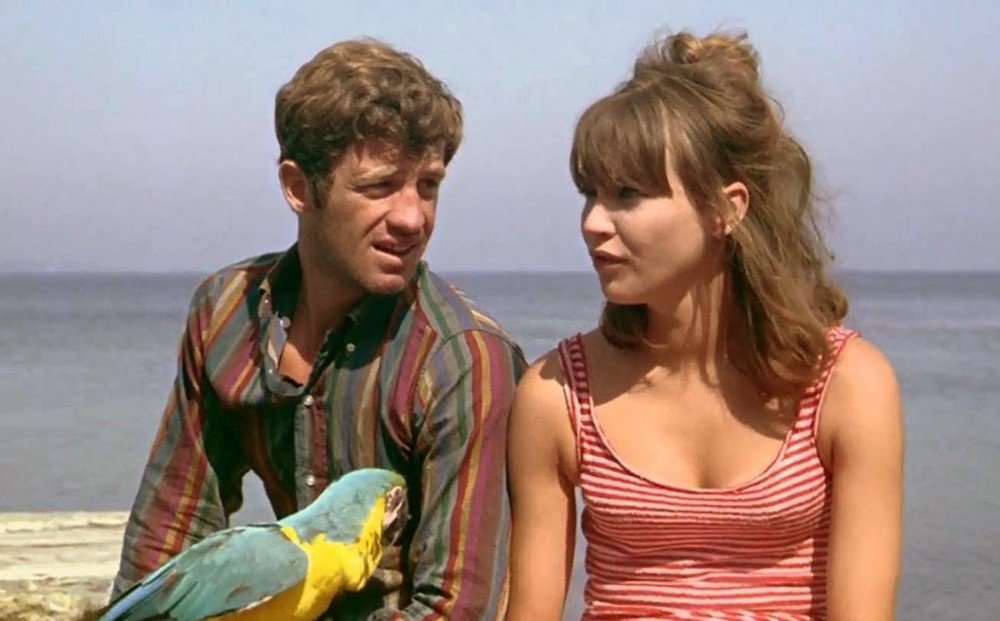 The story is about a passionate man, Ferdinand Griffon (portrayed by the versatile Jean-Paul Belmondo), and his fascinating ex-girlfriend Marianne Renoir (portrayed by the alluring Anna Karina). After a series of upsetting and insipid events, Ferdinand decides to leave his whole boring lifestyle. He elopes from Paris and goes on a crime spree with Marianne all the way to the Mediterranean Sea. They are always on the run, yet relaxed. Every day is an exploit full of blood and balladry.

They try settling down in the coastline but later discover that they are fitted for the outlandish mores. They find joy in impulsively sinking two cars and all their money into the Mediterranean Sea and become wayfarers. Gradually, their relationship becomes weary. Ferdinand continues reading more books and writing his journal. Being exasperated, Marianne forces him that they return to the town.

They are being chased by the OAS gangsters the whole time. Back in the town, Marianne kills a man with a pair of scissors; Ferdinand somehow saves himself after negotiating with the gangsters. This is where Ferdinand and Marianne part their ways.

Fate brings them together again. Another chapter begins, Ferdinand slowly starts growing suspicions as Marianne’s true face starts to unveil. It turns out, she has been using him all this time. Things escalate quickly, Marianne gets caught cheating on Ferdinand. With grudge and rancor, Ferdinand kills her and being mentally unstable, he decides to kill himself using dynamites. He comes to his senses too late. With unspoken regret, a sapphire blue-face Ferdinand fails and kills himself.

For some people, Pierrot le Fou is an unorthodox film. For some, it is one of the greatest films ever made. For me, Pierrot le Fou is a maze. A maze that screams adventure more than romance. To me, it is an exotically romantic story of two equally unstable wild individuals with a different point of views. It is a story of a man being helplessly in love with a woman, reciting poems together, walking through the woods without a care of the world, breaking rules and kissing by the sea.

In essence, I choose to look at the beauty excluding all the chaos. I love the way every time, every time, Marianne addresses Ferninad as “Pierrot” (sad clown) because he is a self-proclaimed wise man, and “Pierrot” defends himself by saying that it is not his name!

There are only two scales of judgment for Pierrot le Fou. You love it, or you hate it; there is no in between.

According to the Ravens, Bidita is just another brick in the wall; completely in love with poetry, paintings and films. She prefers tea to coffee and has a severe Satyajit Ray obsession.

The Unspoken Diversity Deficiency at the Oscars: Amount of Films & Foreign Films