For every young adult who has grown up watching Pokémon in their childhood, the animated show holds a special place in their hearts. Even when the result of every episode was easily predictable, there was a sheer thrill to see it unravel every single time. I can’t stress enough on the adrenaline rush just looking at those countless fights. It was almost like a ritual to watch it after getting back home from the school. That’s why, when the trailer for Pokémon Detective Pikachu came out, I could not control my excitement seeing this fluffy Pikachu trying to take me back to those days.

Unlike the show, the film is set in a futuristic world with much darker, grittier visual appearance. With the sets that look almost taken from the Hollywood neo-noir films, the narrative begins with Tim (Jaden Smith) getting a phone call about the supposed reason for his father- Harry’s death (an apparent car-crash). While tracing back on his memories, Tim rummages through his old apartment, trying to find something related to the cause. Meanwhile, he meets Pikachu- a lightning bolt-creature, which his father used to train. What is surprising though is that he could understand what Pikachu is saying, unlike just the two syllables (pika-pika) that it could speak. 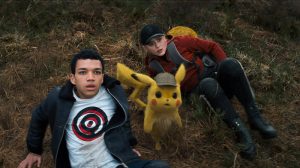 This works as a connection between the creatures and human beings. For someone like Tim, who wanted to be a trainer as a child, but has grown out of that obsession; this isn’t particularly amusing. But, the Pikachu makes him change his mind as he wanted to find the reason for Harry’s death as well. On their journey, he comes across Lucy (Kathryn Newton), an unpaid intern who is looking for just the right story to get the spotlight. She seems just as interested to understand the conspiracy behind the death, which eventually leads all of them to the industrialist Howard Clifford (Bill Nighy) and his slick son (Chris Geere). The father-son duo has a tricky relationship surrounding the dynamic of Pokémon and human; which unravels further.

Although the film does a pretty neat job at bringing back those memories- being packed with endearing nostalgia; the script loses its grip frequently to register anything substantial. The mystery wears thin when there’s very little depth for the characters in order to root for them. Even if the Good-vs-Evil narrative manages to convincingly change our perception about characters, it feels too vacuous after a point with a churned-out formula. I don’t even mind the overdone expositions as the need for making a kid-friendly film. But there’s hardly enough stitching tissue to hold it as a narrative.

Besides the mess of patchy ideas from the script, the lights, especially for the night scenes, were unflattering for the most part. The awe-inducing daylight scenes were moderately better shot to bring out the emotions. But the indoor scenes from the night were screaming to be taken seriously with the overdone contrasts. 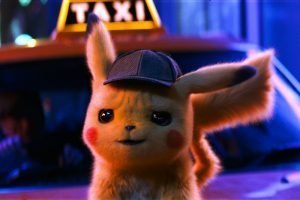 What it lacks in mystery for a detective film, it scores pretty much with the emotions that dictate their decisions. It’s so heartbreaking seeing this adorable Pikachu, and I can’t stress enough on ‘adorable’; being broken into tears. Finding a place in this world while struggling with loneliness, whether for the lost partner or the father; resonates very well with the viewers. Those scenes have just enough duration to register required emotions without stretching it beyond that.

The best thing about the film although, will be casting Ryan Reynolds in the role of fluffy Pikachu. My inhibitions whether he is appropriate for the role diminished the moment his voice-over started in the film. Even when he’s just imitating his Deadpool-persona, it doesn’t feel forced in any way. His style of humor fits seamlessly with the narration and makes the films resonate with the generation that has grown-up admiring the Pokémon.There’s an undeniable charm attributed to Reynolds besides these adorable creatures. It’s sad that even such endearing elements couldn’t save the film from its confused script.

As a result, ‘Pokémon Detective Pikachu’ stays to be an unsatisfying mishmash of several ideas. But if you genuinely adore these creatures, it can at least be endearing.

My Home India [2019]: 'LIFF' Review – An Obscure yet Phenomenal Story of Generosity and Compassion