It is problematic when a film on a social issue turns into a tiring sermon. When such is the case, it fails to make an impact and that’s what happened with Raatchasi (2019). It is an ambitious social drama that sheds light upon the plight of public schools in rural areas. The problem, also, occurs when the commercial elements took charge of the film and overshadowed anything there was to appreciate.

Geetha Rani (Jyothika), the protagonist, is the new headmistress to a neglected public school in Pudhur. She is strict and unforgiving and that troubles the slackers. They call her Raatchasi (a demon) behind her back as her rules don’t favor their aversion to work. The other teachers are indifferent towards the overall condition of education until Geetha dares them to bring the best out of them. She calls out the blunders and lectures throughout the film. The film tries hard to make us realize what is at stake but loses to its own gaffes.

After a certain point into film, there are too many aphorisms to recall and it seems like we are watching a documentary that is issued in public interest. I wish there were moments where I could emotionally invest myself with the film and the characters, like in the case with Rani Mukherjee starrer Hichki. It is inevitable to draw the comparison between Saattai (2012) with Raatchasi as they tread upon a similar plot. Samuthirakani’s Saattai explored the individuality of the children, something Raatchasi clearly couldn’t materialize. Raatchasi aspires to make an effect but succumbs to the needless glorification of superstardom in Kollywood. She even has an action scene inside a closed classroom and frequent punch lines to make her point. 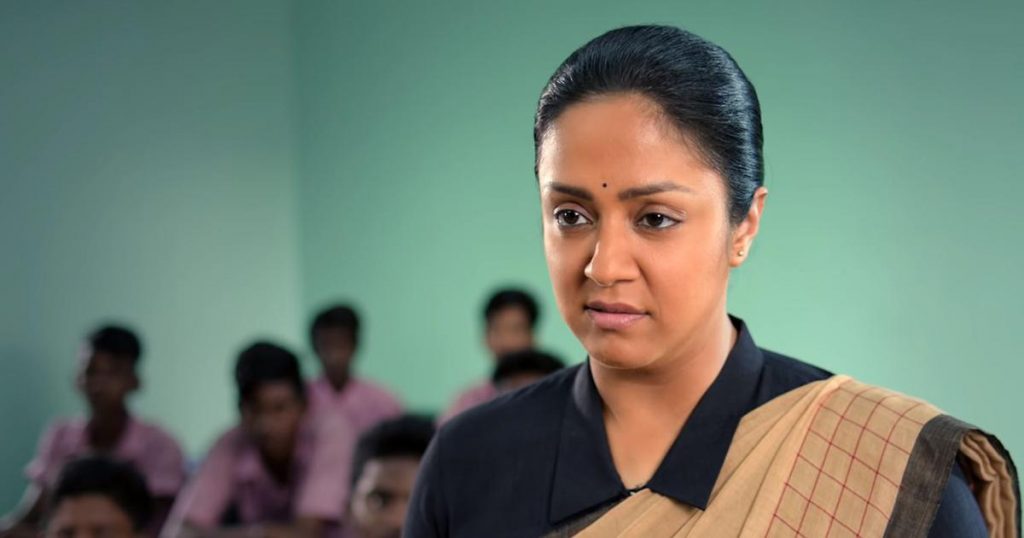 Raatchasi (2019) emphasizes on the point that an outdated teacher can’t make a connection with modern day students. It also explores many more challenges the children face in order to continue with their studies but the depth and sincerity of those explorations are far from convincing.

The film’s confusion between being a realistic social drama and yet not being ready to lose its commercial elements hampered the film and made it only less persuasive. It seems altogether too good to be true as it doesn’t explore the challenges with honesty. I wish the impact of the film’s sermons remained with me for a longer duration, however the noble intent is somewhat commendable. The film has admirable background score. With a compelling background score Sean Roldan tries to show the wrath of Raatchasi in its true form.

The predictable plot is weak but Jyothika’s mighty act gets me through till the end.  However, the curiousness to catch up with Geetha’s backstory feels staged. Too often, the conversations between the characters seem forced and utterly generic.  Jyothika, as an actor shows a certain pattern in her film choices that are women-centric and have a message appended with it. Since her comeback in 2015, with films like 36 Vayathinile, Bala’s Naatchiyaar and Radha Mohan’s Kaatrin Mozhi, her choices have been astute.