Home»Reviews»Films This Week»Rashmi Rocket (2021) Zee5 Review: Taapsee Pannu Starrer Raises an Important Issue but Ends Up Being Offensive At times
Films This Week/Reviews/Zee5

It’s 2014. Late at night, a posse of policemen barges forcibly into the girls’ hostel meant for female athletes participating in the Asian Games. They’re searching for “the guy who is disguised as a girl.” The constable runs towards a door, grabs Rashmi aka Rocket by hand, and slaps her in front of all the girls. While the constable’s impulsive act is criticized, the criticism is undermined by the question of our protagonist Rashmi’s high testosterone levels. The screen cuts to black, and we travel back fourteen years ago, in a village in Gujarat’s Bhuj. Here, she is still a teenager. This is not an excerpt from a play. These are the first few scenes of Aakarsh Khurana’s Rashmi Rocket (Zee5), India’s first film about gender testing in the Indian level playing field.

At large it is also about the corruption in sports associations and gender identity associated with ambitious girls. Although the hyperandrogenism controversy is mostly based on the infamous Dutee Chand case, the larger themes are so basic that they appear to be nearly universal. However, director Akarsh sanitizes it and provides too glossy a surface to complex legalities.

Related to Rashmi Rocket (Zee5): How Thappad Champions An Inclusive Screenplay of Empowerment, Exploration and Realization

Akarsh Khurana is a rather familiar name in the Hindi OTT canon. He was seen in TVF’s incredibly feel-good web show Yeh Meri Family as the father figure. On the directorial front, his most well-known film is Kaarwan, a road trip movie that follows three distinct characters towards a funeral. While the film performed poorly both critically and commercially, it gained a cult following on streaming.

To be fair, Karwaan was partially successful. Khurana establishes an ability to mine out richly rewarding performances from his leading actors through the film. Plus, he has a good taste of realistic, easy-on-ears dialogue. This somehow permeates through this film as well. The central players are mostly well-acted. Supriya Pathak is far better as the matriarch Bhanuben than is expected from such cliché characters of superior authority. You can say that she works as a toned-down form of Ram-Leela’s Dhankor. However, at least it’s better than the insufferably demure Rajasthani mother in Mimi. Manoj Joshi fills some air in his short-lived performance as Rashmi’s progressive father. It was also refreshing to see Shweta Tripathi in a low-key cameo as a Maya. However, the three key players deliver the best performances. Taapsee Pannu as Rashmi delivers a performance that is actually meant to show her talent since last year’s Thappad. Her effective body language is so good that it sometimes goes on to challenge the film’s portrayal of her as an unprincipled rural sprinter. Priyanshu Painyuli is also very competent as her love interest Gagan. Abhishek Banerjee is crackling in his minorly dramatic turn as Rashmi’s advocate. But while the acting front is mostly satisfying, it was disappointing to see such fine actors as Supriya Pilgaonkar, Varun Badola and Akarsh’s father Akash succumb to weakly written parts. The dialogue isn’t tone-heavy. Except for a dialogue that rhymes Kaun with Con, there are no particularly atrocious moments to be seen. The lines are simplistic but they’re mostly rooted in a lived-in reality.

However, the goods Rashmi Rocket delivers are limited to that. On a purely technical level, the film is inefficient. The film has cinematographers from films like URI and A Death in the Gunj but it still doesn’t work because the frames feel unnecessarily lit for the most part. The editing, as with most Hindi films, is lazily executed. The direction and writing don’t take assured steps towards getting into a darker territory despite hinting at it.

I think the writing is the worst offender here. There was so much potential in this story of a tribal rural girl with high testosterone levels, a woman’s leader dealing with issues such as domestic abuse and casual sexism on a judicial level. However, the film gives her economic and cultural identity as a matter of fact. The film’s greatest fundamental failure is exactly that- it never delves deep into the actual areas which could have been well-emphasized.

Even the sequences where Rashmi is being taken for a medical checkup without her consent are filmed and written exploitatively. Particularly, the scene in which she undergoes an ultrasound is projected with sheer lack of competence. In fact, there are times when the film unintentionally slaps its own irony on itself. For example, one hour into the film, a defense lawyer gives an over-sentimental monologue. The judge dismisses his speech by saying, “Real court procedures aren’t as dramatic as your Bollywood speeches.” 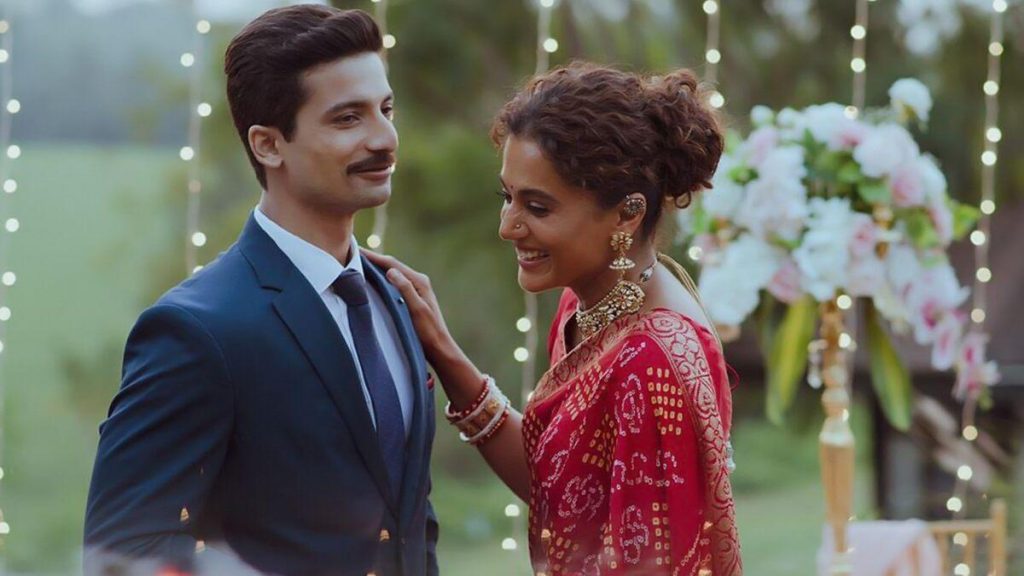 This meta scene could have been exceptionally clever if the film itself wasn’t so routine. It’s so generic that we get a Navratri scene where the heroine performs Garba in a sexy outfit, that too in her village. The scene is offensive on multiple levels. Firstly, because the film is arrogant about how it reflects some kind of reality. Secondly, the scene basically exists to confirm the “feminine” nature of Rashmi. We’re repeatedly assured that at the end of the day, she is a woman. Woman in the sense that she has a boyfriend. In the sense that she’s affectionate towards her father. Also, she’s a woman because she married her boyfriend.

In fact, the best touch of silliness in the film is the way it portrays media as caricatures we shouldn’t take seriously even for once. This works for the most part because it is the reality we’re living, and won’t be half as effective otherwise.

The only reason the film works a little better than the underdog stories of its kind is the fact that it elevates a pressing issue into the solid source material. There are some truly unconventional heroine moments that the film has. However, they get lost in an overall generic, bland offering that has nothing worth anticipating. Rashmi Rocket is bland and predictable, which ultimately cancels its good intentions.