The new Hulu series – Reboot is giving a fresh spin to the tired genre of family sitcoms. Taking an example of a fictional sitcom (of course, I understand the oxymoron!) breaks down the tropes to make the same characters more grounded. With its promising start, the series has already created high hopes for the upcoming season. The series, created by Steven Levitan, just entered its second week of streaming, and the 4th episode delved further into the comically amusing relationships between its characters. With the comedy heavyweights like Keegan-Michael Key, Judy Greer, Rachel Bloom, and Paul Reiser, the series is bound to keep you laughing throughout its duration.

The previous episode, titled “Growing Pain’’ ended with Bree (Judy Greer) and Timberly (Alyah Chanelle Scott) ending up in a bed together. While they are supposed to play mother and daughter in their new reboot show, their relationship as friends and their interpersonal dynamics are jeopardized. There is also an angle of their age difference and generational divide that changes their outlook towards it. That’s why, even if the friendly night in a bar ended up in a sexual encounter between the two, there is enough to figure out for Bree. Her sexuality has come into question for what seems to be the first time, and the new episode navigates the same confusion that she is feeling. 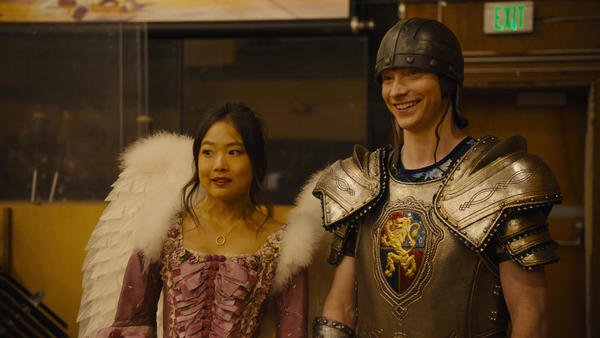 The fourth episode, titled ‘‘Girlfriend’’ is directed by Chris Koch and starts with a scenario right where it left off in the previous episode. Bree wakes up in bed next to Timberly and seems to be going through a sort of sexual awakening. Earlier, while speaking with Reed (Keegan-Michael Key), she seemed smug about her self-dependence in matters of love. She wanted to showcase that she doesn’t need to rely on him anymore like before. She is perplexed not just by the awakening but by the thought of how this sexuality would affect her career. She searches whether there were any Oscar-winning lesbians to whether a single sexual encounter with a woman would make her gay! These are just the random things that a person with heteroromantic conditioning goes through in the first stages of awakening.

Timberly wakes up, and Bree asks how the experience was for her. She mentions that Bree slays, but being a person from an entirely different generation, she doesn’t understand the terminology and starts googling immediately! Being smitten by her compliment, Bree walks to their set with a cheek-to-cheek smile. She has an awkward encounter with Reed, who sees her walking to her vanity van while drinking a Gatorade. He recalls it being a sign that she had sex the previous night, and she affirms his guess. That makes him even more awkward since he is needlessly protective of her. When she mentions that she and Timberly went out, he finds it strange since just the previous week, she tried to sabotageTimberly’ss acting career. She walks away to her van.

Meanwhile, Zack (Calum Worthy) and the studio executive, Elaine (Krista Marie Yu), go for a meeting at the studio café. They speak about their experiences of working from a young age. While he worked for a band-aid commercial, she worked on a device that a pharmaceutical company later purchased. From this information, he gathered that both of them started in the medical field, which baffled her for obvious reasons! While they try to connect as individuals of the same age, on the set, Gordon (Paul Reiser) speaks with the director and learns about a vegan doughnut being left by their crafty, which upsets him.

On the other side, Timberly gets confused about a character detail from the script, and Reed advises her to ignore it and not worry about it. He thanks her for going out with Bree the previous night. As a gesture of helping her out after her divorce, this makes him feel like a protector even if he didn’t do anything to initiate it! Only then does he learn that it was Timberly that Bree slept with, which she cryptically suggests to him. He gets baffled by this revelation about her since Bree was his old partner. He mentions it to Clay (Johnny Knoxville), who then sharesTimberly’ss history of sexual encounters with both men and women from her reality show – Fuck Buddy Mountain. He shares how she lacked self-control and behaved as she wished.

Meanwhile, the old and new writers are getting along better at the writer’s table. While there are occasional hiccups due to the age differences and their understanding of humor, they are now in better sync. During a scene between her and Bree, she suggests a change in the script, and Clay mentions it being her behavioral pattern right from her work on the dating show. After their discussion, Hannah (Rachel Bloom) speaks with the queer staff writer Benny (Dan Leahy) about not coming out to her father as a lesbian. When she came out to her mother, he was absent from her life, so she could never share this with him. Benny encourages her to do so now. She repeatedly tries to initiate a conversation with him about it, but it ends up being their usual awkward to-and-fro interaction.

At the café, Zack learns aboutElaine’ss busy schedule and feels how boring her daily life is compared to his. Vice versa, she is in awe of his glamorous life as an actor. Afterward, they go to the costume departments and try on some of them. They go out dressed as a royal princess and an armored man and start riding on the bikes that they find. On their route, she comes across her boss and gets scared due to this inappropriate behavior by her.

On the contrary, this boss feels relieved seeing her relaxed since he worried that she was overworking. Meanwhile, on the set, Clay and Reed try to convince Bree that Timberly manipulated her into having sex for her benefit. As a result, she goes on to confront Timberly, who mentions how that’s completely wrong and that Fuck Buddy Mountain was scripted.

Hannah keeps up with her attempts to come out to Gordon about her sexuality but fails due to a consistently awkward interaction. While she seems discouraged by that, Benny keeps her motivated to do it. Meanwhile, Bree expresses her anger toward Reed and Clay to make her think that Timberly was manipulating her into having sex. She mentions the scripted dating show, which surprises Clay, who religiously watched it. He mentions feeling controlled by it! (Just another example of the sharp comic writing on the series!) Reed expresses his concern forBree’ss well-being, saying how hard it is for him not to care about her. She says that there’s no need for his protection considering her growth as a person over the 15 years.

When asked to come out on the stage, she gets confused with the stage directions. While all of them tell her to come out” Hannah comes out about as a lesbian to Gordon! To her surprise, he mentions already being aware of it. He also shares how proud he was about his queer filmmaker-daughter being in the press discussions. A sweet moment of father-and-daughter connection blooms, which gets ruined byBree’ss admission about her sexuality: she says that she’s ‘‘sexual fluid’’, unaware of the terminology! She tries to strike the iron when it is hot but miserably fails. Even when she puts her hand out for Timberly to hold it, she refuses to do so.

Where to watch Reboot (Season 1)