Ukrainian multi-hyphernate artist Valentyn Vasyanovych, the winner of Venice’s Orizzonti award for Atlantis (2019), once again returns to Venice Film Festival with the expertly made, Reflection (Vidblysk, 2021). The fifth directorial effort of Valentyn Vasyanovych is yet another pointed exercise in film formalism that’s full of impressively mounted one-shot tableaux, and further eschews surface-level dramatics in order to focus on one’s reflection in the face of war-induced trauma and loss.  While I was astounded by Valentyn’s technical prowess, I wasn’t emotionally invested for the most part. Of course, Reflection is deliberately distant and detached.  At the same time, I feel there’s a liminal quality to the narrative which might gradually grow on me (or not!).

From February 2014, Eastern Ukraine or the Donbas region has been a war zone. It’s a pivotal area in the ongoing Russo-Ukrainian war. The simmering and sporadic armed conflict is between the Ukrainian army and Russia-backed separatist forces, who call themselves Donetsk People’s Republic. UN reports indicate that more than 3,000 civilians have perished in the conflict with an overall death toll of 13,000 plus lives. Moreover, the battles in the conflicted region are said to have escalated since summer 2020. 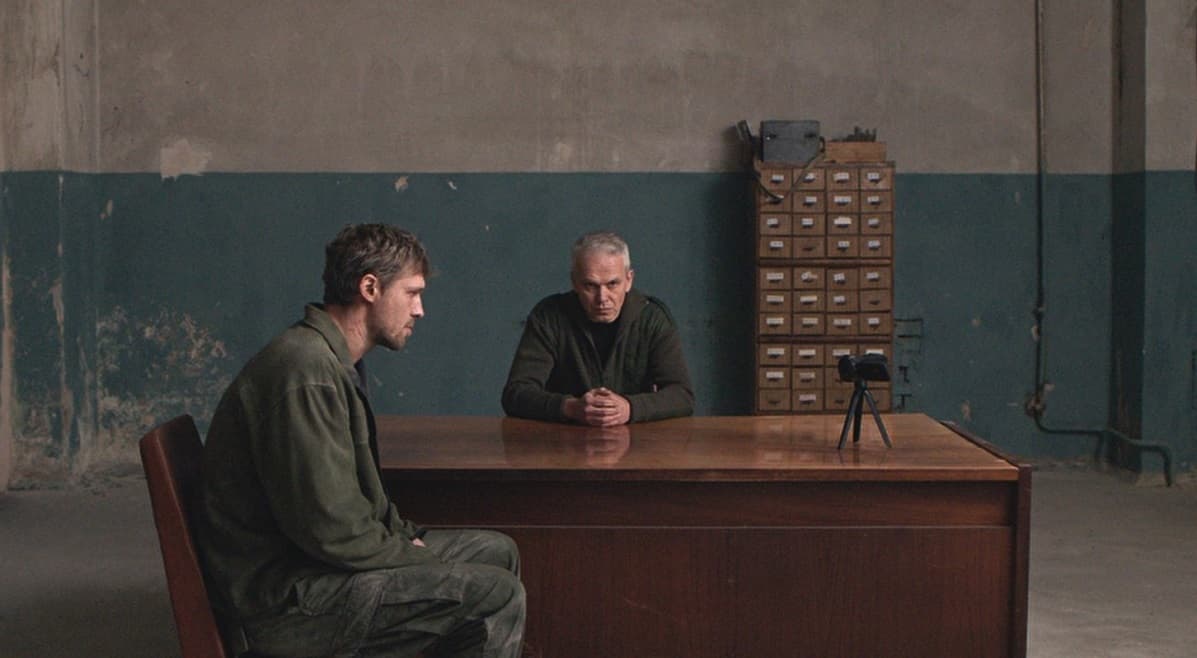 Already a handful of documentaries and feature films has focused on the war zone. Renowned Ukrainian documentarian Sergei Loznitsa made the anti-war dark comedy Donbass (2018). On a broader note, the film dealt with manipulative tactics and propaganda in our cursed post-truth era. Valentyn’s previous feature, Atlantis was set in 2025 in a dystopian post-war Ukraine. Its dilapidated and dour aesthetics instantly reminded me of Tarkovsky’s Stalker (1979) and Lopushansky’s Dead Man’s Letters (1986). With Atlantis as well as Reflection, Valentyn doesn’t offer any conventional take on the war zone. He rather quietly focuses (like the old Soviet masters) on the traumatized existence and profound uncertainties in a war-torn society.

Related to Reflection: The Commissar [1967] Review – A Startlingly Envisioned Drama on the Cruelties of War

Signifying the title, mirrored surfaces are a recurring visual motif in the narrative. In fact, Reflection opens with a darkly ironic scene, where the action in the foreground and the background are separated by a mirror wall. Serhiy Melnyk (Roman Lutskyi) visits his daughter Polina (Nika Myslytska) on her birthday. The teenager is excitedly getting ready for the paintball tournament. Serhiy awkwardly greets his ex-wife (Nadia Levchenko) and her new partner Andrii (Andriy Rymaruk). When she moves out of the frame, Serhiy and Andrii have a drink and talk about the war-front.

Serhiy is a thin, mild-mannered surgeon who treats soldiers transported from the battle zone to Kiev (capital city). Andrii is the proverbial macho guy who though is shorter in stature than Serhiy, clearly towers above him psychologically. Andrii is on a week-long leave from the battlefront. Soon, the unrelenting noise of paintball hitting the Plexiglas cuts their conversation. Serhiy lives alone in a sparse, darkly-lit apartment. He feels emasculated as Andrii has taken over his responsibilities as a father. There are no close-ups or music cues. Each vignette is composed using deep focus lenses and unfolds in long, symmetrically stylized static shots. Yet through restrained dialogues and distant observation, Valentyn makes us understand the characters’ innermost pain.

Serhiy knows about the shortage of medical staff in a war zone. In one excruciating tableau, we witness Serhiy attempting to save a soldier at the operating table. The soldier has succumbed to his wounds because it took a long time to transport him to the hospital. But what pushes him to volunteer for the battlefront is his daughter. At one moment, the inquisitive Polina, in a roundabout way, humiliates Serhiy for not contributing to the war effort like her stepdad. The divorced surgeon soon ends up in the hands of the separatist army. He is taken to one of the many secret prisons in Donetsk’s occupied territory. There his medical skills are exploited in a brutal manner.

Serhiy is asked to stick around in order to check whether the tortured prisoners of war are alive or not. Again the brutal actions are witnessed from a distance, but Valentyn gradually immerses us into the emotionally numbing existence of Serhiy. In one instance, we see the protracted action of Serhiy and a truck driver disposing of the bodies in a crematorium on wheels. Such a truck is ironically disguised as a vehicle providing humanitarian aid. Nevertheless, Serhiy’s frigid exterior melts when he witnesses an unspeakable horror.

Later, during the exchange of hostages, Serhiy is released with an added threat to keep his mouth shut. However, there’s no true liberation for Serhiy. What’s more challenging for him is to deal with his daughter’s emotions as Serhiy’s ex-wife leaves Polina under his care, and goes in search of the missing Andrii. How could the traumatized man reassure his anxious daughter? What can he say that could help her believe in life and cope with loss? Valentyn’s portrayal of PTSD and the tumultuous relationship between father-daughter (in the second half) is very minimalist in terms of emotions. It keeps us more at arm’s length. Yet this is an unfiltered look at trauma and how reverting back to ‘normalcy’ is a long, painful process.

Valentyn Vasyanovych is best known for his contribution as cinematographer and producer in Miroslav Slaboshpitskiy’s devastating silent drama The Tribe (2014). Reflection, similarly, puts us in a harrowing atmosphere; forcing us to endure the characters’ unsettling silences (no violent or sudden cuts whatsoever). As I already mentioned, though Reflection denies engaging us at an emotional level, it is brilliant in terms of aesthetics and subtly handling the themes. The emotional investment itself is a trickily subjective and relative term. I need to recheck my complaints on the film regarding this maybe after a re-watch. In fact, deep down I am wondering why Serhiy’s tough re-entry into ‘normal’ society should throw at us a flurry of narrative-driven emotions.

From a thematic viewpoint, the pigeon-hitting the glass is driven by the illusion of seeing the reflection of the sky is thought-provoking as well as disturbing. It’s an intriguing metaphor for life, unexpectedly uprooted by a myriad of tough circumstances. More fascinating was Serhiy’s attempt to introduce religion to Polina, which he mildly hopes would be an umbrella that protects her from desolation. She is a regular teenager rather interested in drones and horses. But, how she decides to consider religion eventually tells us a lot about human nature in general. After witnessing all the horrors and bitter truths, we find beauty in Polina and Serhiy’s togetherness. Valentyn leaves us on a hopeful note as the family finds each other, listening to the sound of footsteps. We are all survivors wanting to escape the looming darkness of the world. And what can we do apart from closely looking for glimmers of beauty and hope?

Overall, Reflection (125 minutes) is a purposefully austere and quietly powerful tale of human resilience and suffering, set against the backdrop of brutal armed conflict. The film might trigger a grueling but unavoidable reflection on the contemporary world.

Reflection was screened at the 2021 Venice Film Festival