Enclosed by a couple of thermographic shots that are antithetical to each other, Atlantis is a meditative approach at visualizing one of the greatest horrors of humankind, the magnitude of which is mostly unrealized and unattended by us.

A post-war dystopian society is a fancy idea for fiction and a grave one for reality. In the dystopian East Ukraine that has emerged victorious in its battle against the Soviets, Atlantis attempts to reflect upon the outcomes of war through the efforts of Serhii, a former soldier suffering from PTSD, focused at adjusting to the ruins and whatever’s left of his existence. His only companion is another soldier Ivan with whom he practices shooting by firing at metal silhouettes. Both of them work at a smelter.

Things are rough for they are inexperienced to live a life out of the battlefield. Ivan has lost control of his senses and is in a state of acute despair. Turn of events leaves Serhii alone in this struggle. The smelter closes down and thus, the only element that anchored life in this land is sent to oblivion turning the land entirely uninhabitable with the lack of ecological and economic support. 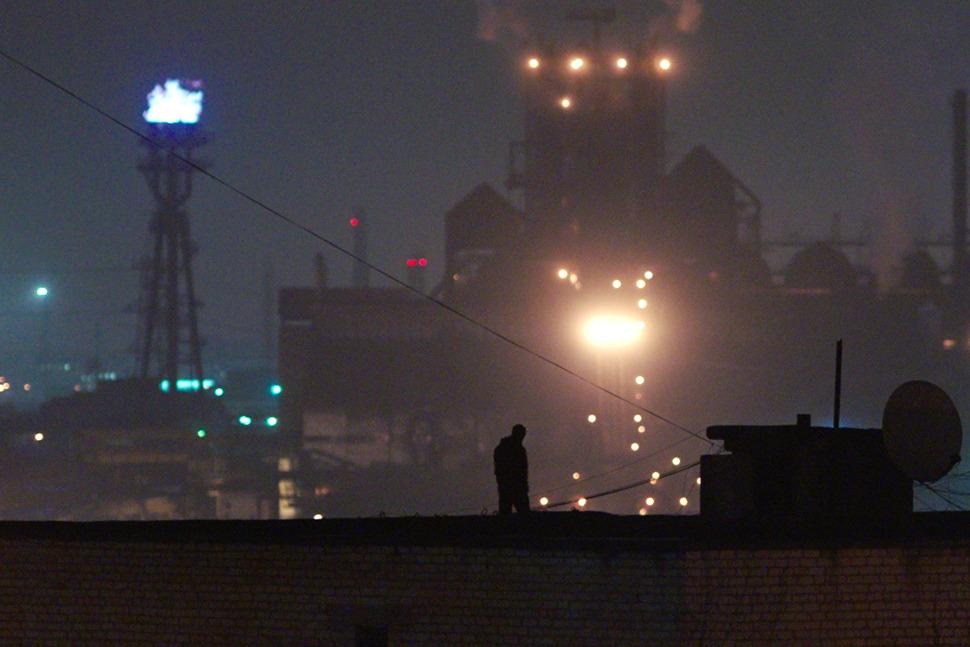 Valentyn Vasyanovych’s Atlantis is an extremely intelligent film when it comes to designing a dystopian world akin to those of Mad Max and Book of Eli. The wounds are fresh on the land and society hasn’t matured since it is near future. There is no complete recovery or adaptation yet. Industrial scapes dominate the lithosphere and all green that is left is the military green of tanks, trucks, and uniforms.

Valentyn patiently lets the screenplay evolve to transfer the agony, restlessness, and anxiety of its characters to the audience. Most of the shots are static as the camera captures the banalest of proceedings from a fixed frame to allow the viewers the time to take the world into consideration and weave their thoughts around it. The deteriorating climate is becoming a challenge but the visual idea is not exaggerated or imposed on the face even once. Horrors of war are only the topic of and the only topic of conversations.

The lack of close shots does not allow a deeper delve into the actors. They appear convincing from the observant lens but it feels strange that Valentyn, who’s also the director of photography, doesn’t exercise gimmicks of the camera to fathom into the psyche of his characters, especially when the protagonist is suffering. His vision comes out to be quite engaging for the defiance it carries. Probably, he wanted to document entirely from a third eye.

One particular shot that caught my attention would be a steady shot that closely resembled Danny’s Wheel shot from The Shining. The only difference was that Danny on his tricycle was replaced with Serhii in his car. I can’t comment on whether it was coincidental or deliberate. But it was evident.
Editing is done in a way that the film appears to be a set of different events that share a common ground. The accumulation, however, hints at a greater narrative if one reads between the lines. The colour-grading renders a correct appeal to the film’s soul while there is an acute dearth of various shades. The screen is dominated by muted olives and light entrances are almost blinding due to the heavy contrast.

Atlantis is an intelligent film. An important one too, It has its own set of ideas to convey which are overlooked most of the times. But the untapped potential prevents Atlantis from becoming a great film. It is good when it’s doing its best. It often stumbles to find coherence in all the ideas it suggests. War is big and there’s hardly anything minimal about it. The maker is aware and hence, he touches a number of aspects at their surfaces and doesn’t explore further, which again is quite an intelligent thing to do but I reckon that screentime could have been provided to a lot many activities than there were. Serhii himself deserved a deeper exploration. It has dense material at its heart and intelligent execution.

Woody Allen and Cinema as the Opium of the Masses