“Get on the Bus (1996) is entertaining as it plays, full of banter and camaraderie, but for a film so inwardly focused on this real-life monumental event, it doesn’t have much of a resonating message to leave with.” 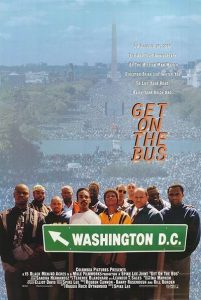 On the one-year anniversary of the Million Man March, Spike Lee released Get on the Bus, about a group of black men who travel on an intercity bus from Los Angeles to trek their way to Washington for this monumental event. Bottled up in this vehicle for most of the film’s duration, these men of varying characteristics and backgrounds immerse themselves in discussions about the importance they garner from the march and how they view their blackness in the USA. Though the film never goes as deep as it ought to, it is for its entire runtime an engaging piece of work despite the limited concept, thanks to some fully committed acting and dialogue.

Since there’s little to do cinematically with this road movie, it relies on the strength of the dialogue to really work, bursting with energetic and confident back-and-forths where just about each character has a conversation with each of the others. The film’s entire duration is filled with the kind of authentic and electrifying dialogue Lee has proven to be a master of scribing, though this script was actually written by Reggie Rock Bythewood, making it the second film Lee didn’t have a hand in writing (after Girl 6, his previous film which he released just earlier in the year).

And this great dialogue is not wasted on its talented cast, an ensemble most of whom had worked with Lee before and are so comfortable embodying each of their characters, there’s never a hesitation of disbelief. For the first time in any of his films, Lee himself doesn’t make an appearance, but he fills in that gap with a terrific ensemble: just a select few of these characters is Evan (Thomas Jefferson Byrd) who’s somewhat ironically chained to his son Smoove (De’Aundre Bonds) due to a court-order stipulating his release for the march, though under this strict supervision. There’s Gary (Roger Guenveur Smith) son of a slain cop, who confronts the ex-gangbanger now renounced Muslim Jamal (Gabriel Casseus).

There’s also the gay couple, Kyle (Isaiah Washington) the fashionable Republican hiding his homosexual pairing with the more open Randall (Harry Lennix), played out with little stereotype, which is why it’s a surprise to the others – especially to Flip (Andre Braugher), the most outspoken, therefore most arrogant of the men, especially when he’s throwing out the word ‘faggot’ at them (which is interesting for those most familiar with Braugher as the gay police captain on Brooklyn Nine-Nine). None of these actors gets prominence over any other, it seems they’re all given an equal amount of screen-time. 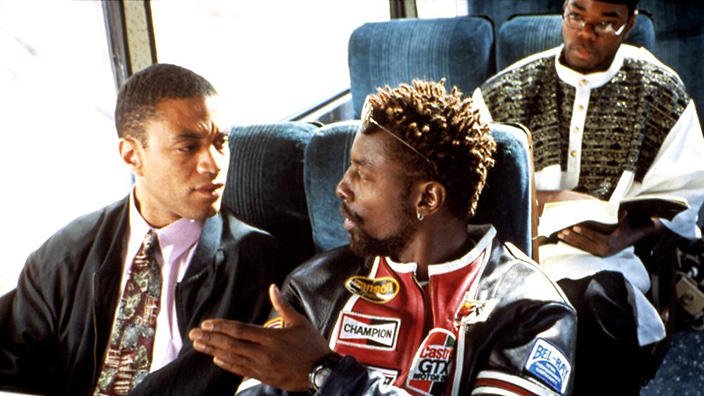 The cast of characters is nearly all black, yet they still find ways to antagonise each other, whether by sexual orientation, shade, age, or even choice of name. There are two small appearances to shake up identity tensions even more: Rick (Richard Belzer) who restrains himself as he argues about how much he can identify with racial oppression because he’s a Jew, and upper-class conservative Wendell (Wendell Pierce), who amplifies the political alignment tensions, as well as his dismissal of racism existing in this era of the US.

As very entertaining as the performances and dialogue is, there is the feeling the film isn’t being dramatic enough to really push through with the more serious timely issues of black America. There is a sob story from Jeremiah about how he became homeless simply because he was fired from his job despite the lifetime of work he dedicated to it – although a situation people find themselves in, it’s in this film it feels more like yet another isolated character back-story rather than wholly attributed to black America like how the film wants it to be. In fact, much of these characters’ life-stories are hardly edifying or progress this microcosm of black America on this bus. Each of these characters butt heads over their various back-stories and the transformations they’ve had over their varying decades of life, but there’s overall just a sense of them relaying their differing life experiences, rather than it culminating into anything with thematic worth.

Get on the Bus (1996) is entertaining as it plays, full of banter and camaraderie, but for a film so inwardly focused on this real-life monumental event, it doesn’t have much of a resonating message to leave with. It feels like a lighter affair from Lee than some of his other more brooding and more culturally in-depth films that have a better angle at addressing racial politics and the in-fighting occurring within African-Americans. But it’s still a highly watchable film, a joy from beginning to end because of how much this cast casually and yet seriously inhabit their roles that are entertaining like movie characters, yet authentic like real-life people.