The word ‘Sanzaru’ in Japanese eludes to three wise monkeys who “see no evil, hear no evil, and speak no evil, a concept that one can interpret as a denial of unwanted truths. In Xia Mangus’ debut feature as director and screenplay-writer, this concept finds the perfect fit inside the dynamics of the decrepit house where it is set.

Sanzaru opens with a sequence in the middle of the night, in a weathered cemetery, nestled along a country road. Voices intermingle from the individual tombstones and then fade into one other. It provides the perfect introduction to the main setting for Mangus, the house along the countryside where Dena (Jayne Taini), aging, dementia-ridden woman is tended by her Filipina caretaker Evelyn (Aina Dunlap). The film follows the shy, introverted Evelyn as she attends to Sena’s needs dutifully, and then take on a parenting role for her restless teenage nephew, Amos (Jon Viktor Corpuz) who has been ousted by the school, as well as navigate uncomfortable interactions with Dena’s troubled Afghanistan veteran son, Clem (Justin Arnold).

Related to Sanzaru – A Mermaid in Paris [2020]: ‘Fantasia’ Review – Somewhat fun but definitely all over the lace

As Dena’s mental state is declining with each day, and she starts talking to someone in the night that Evelyn cannot control, she herself grapples to come to terms with her own mother’s loss and starts to feel like the temporary home has its own set of secrets. Though for the most part whatever eerie happens goes unseen, unheard, and unsaid. As more and more mysterious events push Evelyn closer to her employer’s horrid past, is she ready to face the truth as skeletons start falling out of the closet? 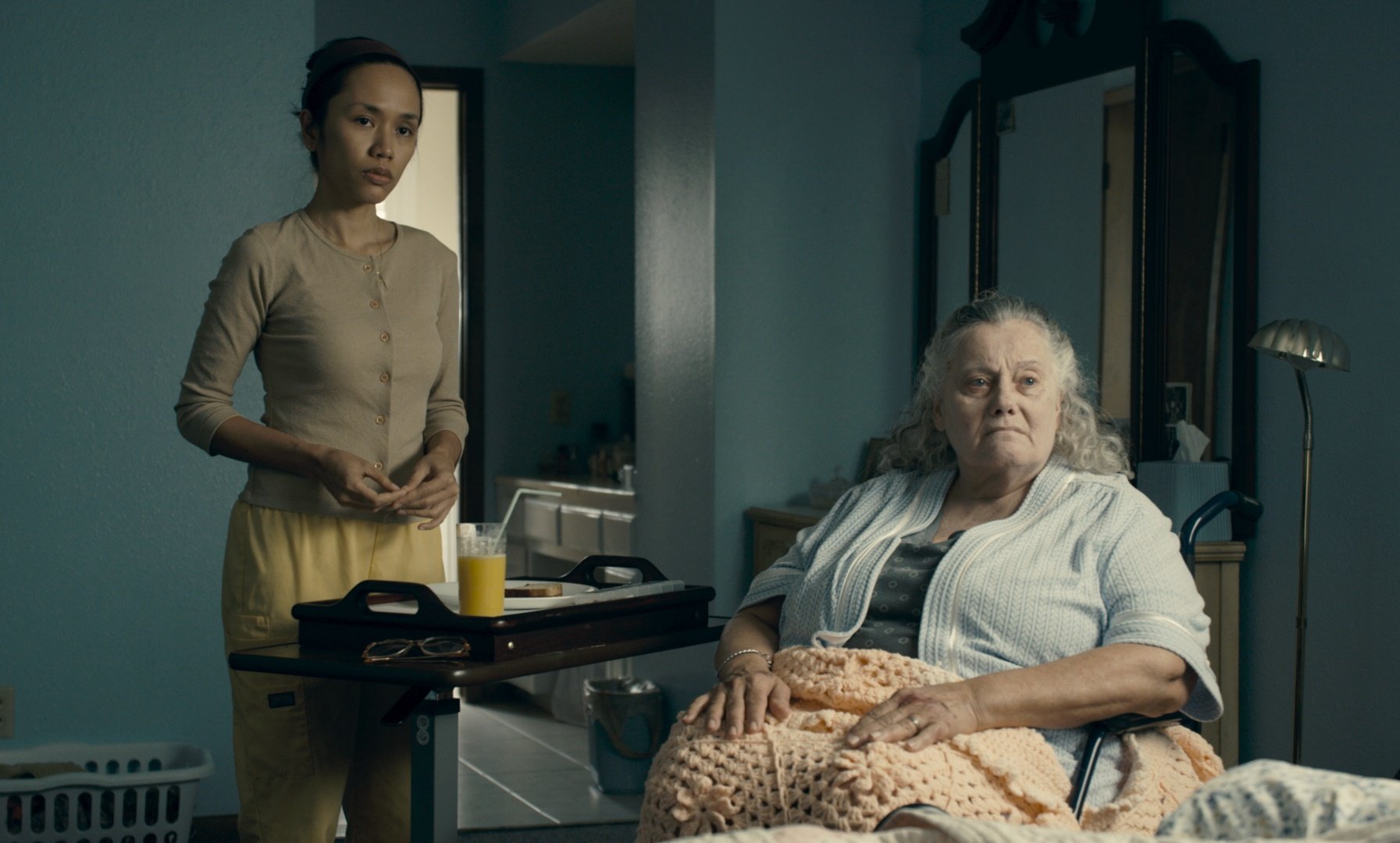 The slow-burn script of Mangus helps in keeping the events restrained and effective. There’s no jump scares to follow or live up to, as most of the first half evokes a sense of pervading ill than horror, and delves feel into its character’s heads. And even though the supernatural element is made pervasive by the use of technological intervention, the focus stays primarily on the living. Without the overblown elements of horror, it is quietly reminiscent of Ari Aster’s Hereditary (2018). Here, the chills are more condensed, the reasons more accessible. Particularly impressive is the unsettling sound effects that add up to create a foreboding that permeates most of the scenes. The background score makes room for an eerie chanting and a glitchy old in-house communication system used by spirits to spook the house’s inhabitants.

In her first feature film performance, Dunlop is quite fine in providing her distraught Evelyn with just the right balance of strength and vulnerability. Taini brings in a dignified, ferocious act as the matriarch of the house, one that rises above her illness and her temperament. In the scenes of disturbing violence, her performance shines. The use of photo-sensitive projections of light is markedly effective. Although Mark Khalife’s camera captures the slow unfolding of events with care, Joshua Raymond Lee’s editing could have been tighter. The short interlude that occurs between Amos and Evelyn does not add up to the narrative and could have been explored better. Moreover, the ultimate revelation, when it occurs, does not hit the nail on its head, but is rather hastily covered up in the end. These elements show how Sanzaru brims with promise and often gets close to brilliance, but is ultimately caught up in its own generic tropes. It is never dull but becomes a tad predictable near the end.

Considering all that it brings to the table, Sanzaru is a lusciously paced psychological thriller that effectively creates its own modern bend to the gothic-house horror-thriller. It asks universal questions about mortality and faith, grief and trauma, and inclines itself with atmospheric horrors, disregarding borders. But most importantly, it introduces Xia Mangus as a considerable talent to look out for.