Sex Lives of College Girls (Season 2), Episodes 3 & 4: The HBO Max series, ‘Sex Lives of College Girls’, has been consistently hilarious and filled with genuine moments of warmth. Created by Mindy Kaling and Justin Noble, the four female roommates from this series ensure a riotous ride through their personal journeys of self-discovery. The lead cast of the show – Amrit Kaur, Pauline Chalamet, Renee Rapp, and Alyah Chanelle Scott ensure that there is not a dull moment while showcasing the characters’ adventures. While every character is trying to explore different parts of their personalities, the new episodes showcase them taking on some new, interesting challenges.

Directed by Lila Neugebauer, the third episode, titled ‘The Short King,’ is written by Sarah Tapscott. Leighton (Reneé Rapp) is preparing to be a part of the elite group named Kappa. She is doing it to appear good in her mother’s eyes besides fulfilling her long-time wish. While her roommates try helping her in filming a video for the Kappa, the next-door roommate – Jackson (Mitchell Slaggert), makes it impossible to do so with the loud sex noises. Meanwhile, at their school gym, Bela (Amrit Kaur) comes in with Whitney (Alyah Chanelle Scott) mostly to look at the tall and handsome guys. That is when she is approached by a shorter guy who is just as fit as anyone else. 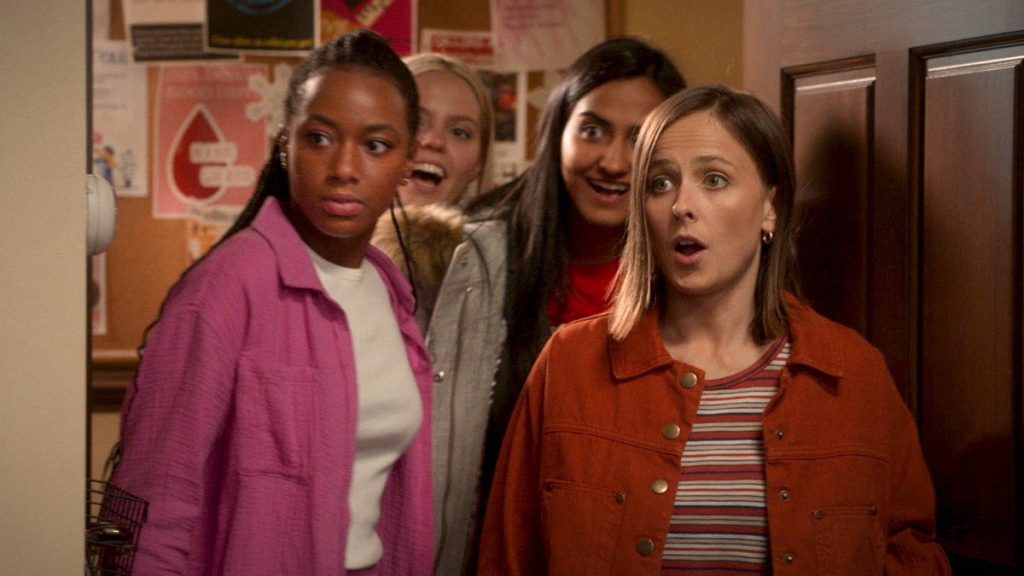 On the other side, Kimberly (Pauline Chalamet) is consistently trying to find ways to fund her education in Essex. Her counselor mentions that getting good grades is the only possible way to ensure funding to get her admitted into another good school. After that conversation, she stumbles upon a pamphlet that mentions a considerable sum for students from elite colleges to sell their eggs. While working her way into Kappa, Leighton is also on her journey of sexual exploration, especially after finally coming out about her sexuality. Once she put up her own face on the dating app, she starts getting requests one after the other.

Like always, Bela is enthusiastic about her friend’s (Leighton’s) endeavors, which makes her feel weirdly satisfied. Meanwhile, Bela and Whitney decide to take a Biochemistry class together. Whitney is taking it because she wants to take on new challenges. Bela is doing it mainly for the sake of her parent’s wishes. Their chatter interrupts the class, and a white guy mocks them about being in the wrong class. That upsets Whitney. Later, when she speaks with her mother about taking this class, which is historically hard to pass, her mother advises her to leave it and rather use her own political influence to get a good job. Whitney needs to get good grades in more accessible subjects.

As a result, Whitney’s determination to pursue Biochemistry begins with genuine passion. Meanwhile, Kimberly bumps into Jackson while walking to her Irish Literature class and realizes he is also taking the same class. She cannot believe him being a part of it, and he makes fun of her for assuming he is not bright enough. While Leighton hooks up with one girl after the other, she refuses to share any details about her sexual flings with her roomies. However, when they start becoming nosy about it, she reveals every single bit to them, which reveals that she is simultaneously sleeping with many girls.

Meanwhile, Bela is awestruck by the short guy from the gym and starts writing about him calling him a Short King. Jeff from the Catullan assumes him being the short king, and they reminisce over the good times they had in bed together. During one of their classes, Kimberley rushes out of her class in the middle of a group reading session. While the professor thinks she is overwhelmed by the content of what they are reading, she is worried about having to leave Essex. Jackson consoles her and shares a sense of connection for both of them, who are having difficulty fitting into a new social group.

Whitney and Bela return to their dorm room to find two girls arguing with Leighton, who had slept with her before. She is annoyed by how every girl on the Essex campus has hooked up with every other girl and left her in a net through her adventures with them. While she plans not to contact any of them, she soon learns she has Chlamydia. Because of this, she needs to alert all of those previous partners to get tested. While she is at the start of this conflict, Kimberly seems to have gotten over hers. She gets in touch with the place where she can sell her eggs to help her with funding her education.

Episode 4: Will You Be My Girlfriend?

Directed by Lila Neugebauer, the fourth episode, titled ‘Will You Be My Girlfriend,’ is written by Rheeqrheeq Chainey. After learning about her diagnosis, Leighton is unsure how to break this news to her ex-partners. Meanwhile, she also gets to be a part of the Kappa along with Whitney. She does not want to have a wrong impression of herself at any cost. In their dorm room, the girls hear a noise coming from Jackson’s room. Only this time, he was drilling a TV and not having sex. They get to know about it when they see him doing so without a shirt on.

While they leave his room, he asks Whitney to join him to study together. She considers it to be genuinely about studies, whereas her roomies claim it to be obviously sexual. Leighton and Whitney decide to help her with her plan for the same. Meanwhile, Bela struggles with her new venture of an all-female magazine. It is still challenging to find talented writers and then promote them to the level of the Catullan.

Whitney is engrossed in her biochemistry studies, and Canaan feels happy seeing this nerdy side of hers. After that conversation, he asks her whether she wants to be his girlfriend. That confuses her since she already considered them to be boyfriend and girlfriend. When she asks Leighton for advice, she directs her to the girls from Kappa, who would certainly have knowledge of how to handle this issue.

In the Kappa meeting, Leighton meets one of her ex-partners – Natalie, who confronts her for giving Chlamydia. Leighton keeps denying the blame and offers to help with the money to pay for its treatment. She tells another girl from Kappa about Natalie giving off bad energy. Meanwhile, Whitney speaks with Kappa girls about her issue with Canaan, and one of them suggests she go through his phone records to know the details instead of wasting her time thinking about it.

When Kimberly goes to meet Jackson’s room, she finds a nerdy classmate named Fred, whom he brought to join them for studies. When Fred goes out of the room, Jackson tells her the reason. He has a crush on Kimberly and Jackson wants to help him. Jeff speaks with Bela about the Catullan cover and its design layout. While she gets bored by the nerdy details, she hears that their magazine is being printed with alum money and shared with all the students. She thinks of a plan to replace the cover of their magazine that would give them the same benefit as the male students.

At the Kappa meeting, all the girls are asked to sit on separate seats and share one of their secrets. While one girl starts going after the other, Natalie goes past them and shares the news that Leighton gave her Chlamydia. As a result, she and Whitney get kicked out of the Kappa meeting right after. They go to another party and meet Bela & Kimberley. Whitney meets Canaan wearing a Santa clause costume and manages to get hold of his phone. Meanwhile, Bela shares her thrilling plan with Kimberley of using the Catullan cover to share their QR code with every student. As a result of this clever plan, they suddenly start getting several followers.

Jeff walks into this party, finds Bela, and confronts her about the magazine cover fraud. He gets annoyed seeing her using him in such a way and leaves the party. Zoe, Canaan’s co-worker, walks in and sits on his lap, which upsets Whitney. They argue about the same issue, and she also mentions her displeasure about his earlier question. Meanwhile, Leighton keeps up with her attempts to not be excluded from Kappa and calls Quinn to persuade her. She also confesses that Natalie’s claim is valid and apologizes for bringing bad energy to their group. Quinn cuts the call in the middle of the conversation and does not give Leighton a chance to make a case for herself.

Jackson bumps into Kimberly and tells her how she and Fred are some of the most intelligent people he knows. Since Fred would not have a chance with her, he wanted to help him. While leaving, he also mentions that Kimberly is hot. While Leighton has lost hope of getting back into Kappa, she receives a notification saying she has been accepted into the group, and so is Whitney. They both get elated by this news despite everything that happened before. However, right after this happy news, Whitney meets with Canaan, who breaks up with her due to her uncertainty about their relationship.

Five Greatest Sports Movies Ever Made