Shantaram (Season 1), Episode 10: To give credit where it’s due, ‘Shantaram’ has improved significantly since ‘Like In The Time of Cholera.’ By bringing an end to the ‘Lin is in trouble but gets out-Prabhu and he have a fight which is resolved-Karla pulls some enigmatic crap-Lisa is distraught, again’ cycle, the plot has only moved forward since. As we draw nearer and nearer to the end, significant aspects of it are becoming nothing short of exhilarating as every action feels consequential, and confrontations that have long been delayed are finally coming to a head. Also, Hunnam deserves a great deal of credit for infusing a lot of charisma into a character who doesn’t have any, and each episode now is only making it more visible. Whatever happens next will make episodes 8, 9, and 10 seem like the show’s high points or some extremely well-conceived build-up to an excellent finale.

In a flashback, we arrive just before Lin’s escape from Pentridge. Harry Barnes thinks Lin is a ‘dog’ because of his lengthy meeting with Nightingale. He talks to Harry and resolves the misunderstanding, but when Harry attacks Lin, the former strikes back. Lin beats him to a pulp to set the record straight that he isn’t a snitch. Later on, though, Harry and his men get their revenge on Lin by catching him unawares and then stabbing him multiple times. Lin loses a severe amount of blood but manages to survive. 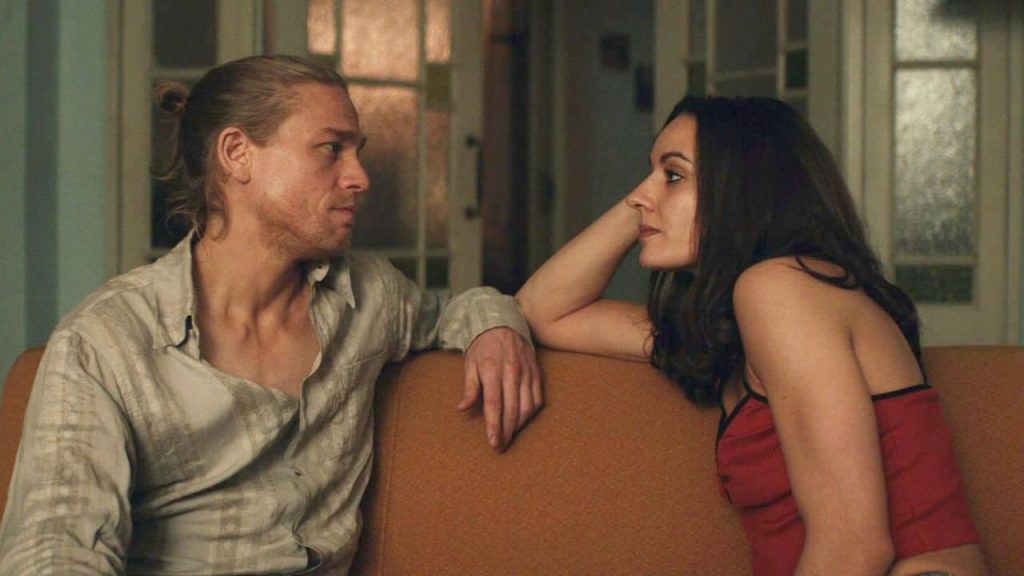 Today, Prabhu’s taxi helps Lin and Didier escape from Raheem’s tail. Lin hides at Didier’s flat in a terribly anxious state. His life in Bombay has been completely upturned, and the helpless state he finds himself in reminds him of his time in prison. Abdullah arrives at Lin’s request. Didier informs them that Raheem is looking for Lin as he believes that Lin has swindled him. Lin is confused as he doesn’t even know this fellow, but when he’s told that Raheem is a customer of Maurizio’s, Lin knows it’s him who set him up. Just then, Prabhu arrives with information about the hotel where Raheem is staying. Abdullah promises to help Lin, and the two take off to handle this unforeseen mess Lin has found himself in.

Karla returns from her date and tells Lisa what she is about to do. She’ll give Kavita a twisted version of the affair surrounding Sagar Wada’s acquisition. Lisa’s evidence will be crucial, given she was the prostitute used to seal the deal between Rujul and Walid. Lisa will help as long as the story doesn’t get published before she can escape from Bombay. Karla knows that once the story is out, she will have to do the same. Lisa invites her to join her and Modena in escaping from Bombay once Karla has arranged fake passports for them. Lisa narrates what happened at The Palace to Kavita but changes the end of the story. In her and Karla’s version, Rujul refused Walid’s deal after having his fun. Owing to this, Walid got Rujul killed. Karla also gives Kavita the audiotapes and pictures of Pandey and Sunita. Karla states that she works for Walid, and the tapes and photographs were meant to keep Pandey in check. In her mind, Kavita pieces together a story about Pandey’s involvement with Walid and Madame Zhou about Rujul’s death to get his position. Karla also gives her word to Kavita that Sunita will corroborate.

At the hotel in Colaba where Raheem is staying, Prabhu gets an attendant’s uniform from a friend who works there. After entering Raheem’s room because of it, Abdullah and Lin ambush everyone. Having violently beaten them up, Lin gets confirmation from Raheem about Maurizio setting him up. He tells him that he has nothing to do with his business. Abdullah, an associate of Khader, terrifies Raheem, who promises to leave Lin alone and leave for Nigeria. He even calls his goon, watching Maurizio, to hand him over to Lin. Refusing Abdullah’s help and Prabhu’s advice, Lin decides to go after Maurizio by himself. Maurizio uses the scissors he had taken from his washroom to free himself. He then kills Raheem’s man and escapes. When Lin arrives at Maurizio’s place, he finds it in a mess and Lisa and Modena’s passports that Maurizio had confiscated. Seeing Raheem’s man’s corpse, he escapes avoiding further trouble.

As this is going on, Nightingale arrives in Bombay. His liaison officer, Chavan Sharma, takes him to the Bombay National News office, where Nishant and Kavita work, after a prolonged hassle at the airport. When Kavita meets Nightingale, she states that Lin learned about the story she was doing about him and escaped. She then throws Nightingale and Chavan out on account of not following the protocol police officers need when visiting a press office. When Kavita tells Nishant about the kind of story she has traded for Lin’s, he is just as excited and hence agrees to suppress Lin’s story.

Abdullah delivers Khader’s money to Karla, two lakhs, that she will take to Sunita. Karla asks him to get new passports for Lisa and Modena expressly. On the lam again, Maurizio is brought to The Palace by Zhou’s men. He tells her about Modena’s betrayal when she demands what happened to her money. Just then, Karla arrives with Abdullah. When Zhou tells Maurizio that the two are there for their Master’s business, Maurizio puts two and two together to figure out that Karla exposed his business to Abdullah. Like most people, he, too, didn’t know that she worked for Khader. Karla gives Sunita the money, a large enough amount to start a new life, and tells her about Pandey’s abandonment. The condition for the money is her corroborating Lisa and Karla’s story to Kavita, which Sunita agrees to, having understood how expediently Pandey treated her.

Just as she’s leaving, Karla is told by Zhou to remember that their secrets now bind them. When Abdullah and Karla exit The Palace’s property, Zhou follows them. Around this time, Lin goes over to Karla’s place and finds Lisa there. He asks her about her involvement in the whole Maurizio-Raheem business, and she reveals all she knows. Lin tells her that if she gets Maurizio for him, he’ll give her passport back and Modena’s. Lisa reluctantly agrees. Didier gets involved as a middleman to contact Maurizio, and the latter calls Lisa at Karla’s place. She arranges a meeting between her, Modena, and Maurizio at her place, where Modena will return his money back to him in exchange for their passports and some cash. Maurizio agrees. Karla takes Sunita to Kavita, as promised. When she arrives at her place after dark, she is shocked to find Lisa gone.

Maurizio arrives at Lisa’s place at the appointed hour as agreed. He has a gun, but Lin manages to surprise him. After beating him up, when Lin threatens to kill Maurizio with his gun, he reveals that he thought Lin set him up, but he didn’t know that it was really Karla as he had no idea that she worked for Khaderbhai. The revelation is a harrowing shock for Lin, who cannot believe that she and Khader have played him. Lisa knows that this spells doom. Lin doesn’t kill Maurizio but, in his frustration, fires a bullet anyway, despite his promise never to use a gun again.

Nightingale doesn’t believe Kavita’s statement that Lin has left Bombay. He is provided a dark, dingy room by the Bombay Police to work in. People there aren’t really cooperative, and he feels lost. He asks for hotel records to check where Lin might be living and, as a fulfillment of the request, is given a mountain of them. He realizes that no one will assist him in going through the records and proceeds on this herculean enterprise by himself.

Lin takes Lisa to Karla’s place and gives her the two passports he’s had with him all along. Then, he discloses what he’s found about her and Khader. Karla is devastated yet knows him to be right when he blames her for tricking him into staying so he could become a part of her and Khader’s plan to usurp Sagar Wada. Eventually, when he asks her if she ever had real feelings for him, she says that she did, but Lin doesn’t care. Lin thanks her for finally giving him a reason to get out of Bombay, an ironic end given that his love for her extensively played a role in keeping him there. Karla tells him he needn’t worry about leaving as the Kavita business is taken care of, but he doesn’t care and doesn’t intend to see Karla again.