What happens when your worst dream suddenly comes true? Shiva Baby (2021) attempts to tackle the aforementioned situation uniquely. The awkwardness inherent in this scenario is explored in a refreshingly hilarious manner. It sharply unveils the different layers of defense mechanisms imbued in the personality of the young protagonist, Danielle (Rachel Sennott), as she deals with the angst of a clueless, blossoming young adult.

The plot revolves around a Shiva, a week-long mourning period observed in the Jewish tradition after the burial of the deceased. Danielle is expected to arrive along with her overbearing parents, who prepare her for cross-questioning by the guests. She is pursuing a major in gender studies, much to the disdain of her job-oriented relatives and family friends, while working as a sugar baby to earn money on the side. Tragedy ensues as she runs into her ex-girlfriend, Maya, from high school, who is currently in law school. Also present is Max, her sugar daddy with whom she had a sexual encounter at the beginning of the film, a former colleague of her father, Joel. She is shocked to learn that he is married to a “female entrepreneur” with an eighteen-month-old daughter, both of whom are soon to arrive. This leads to a series of unfortunate events that dismantle her carefully crafted persona and her own sense of self-worth.

Written and directed by Emma Seligman, who drew inspiration from her personal experience at NYU, Shiva Baby is a hilarious dark comedy that deals with its unconventional subject matter deftly. It elucidates the need for sexual validation, which breeds insecurities among young people on the cusp of adulthood. She used her Jewish background and conversations she heard at the various funerals to form the crux of Danielle. Her bisexuality propelled her to explore it through Danielle, and her peers at NYU, who worked as sugar babies from diverse strata, inspired the premise. The semi-autobiographical nature of the work lends a certain authenticity to the proceedings, which makes it thoroughly engaging. We see the struggles of a woman who has to tackle disparaging remarks from judgmental neighbors while trying to stand her ground.

At the funeral (she barely remembers the deceased), Danielle is thrown off-guard by the constant comments by the guests on her weight loss, relationship status and career prospects. They look upon her with pity and contempt, comparing her to Maya, whose decision to go to law school is deemed praiseworthy in their opinion. This makes Danielle defensive, and her self-esteem begins to dwindle. The questions from the guests bombard her constantly as she grapples with conflicting notions about her position in her relationship with both Max and Maya. She appears in tight close-ups, surrounded by drowning voices of the people at the shiva, which becomes as disturbing for the viewers as they are for her. The sound design captures this mayhem accurately. 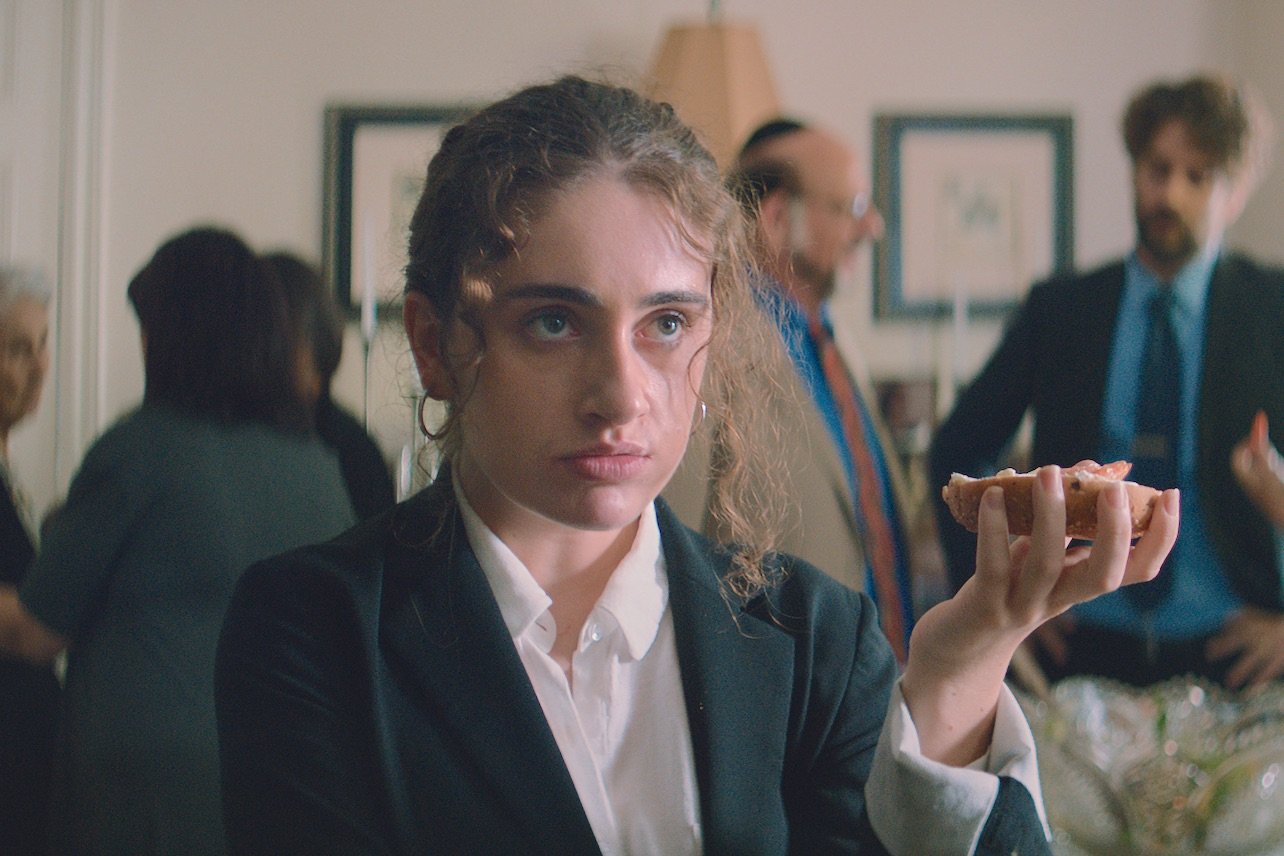 Danielle tries to evade the image of herself imagined by her parents in her encounters with Maya. She is dismissive and aloof while struggling with reigniting old feelings. She is also trying to maintain power in her relationship with Max. She thought that she had him under her grasp, which made her feel validated. But as soon as the wife, Kim, appears on the horizon, the sun sets over her illusion. In one scene, she admonishes her intellect and “boring” wife image, while Maya, falsely suspecting that Danielle liked Kim, praises Kim for her smartness and beauty. This exacerbates her jealousy and diminishes her self-esteem further.

Danielle desperately tries to reinforce her position by sending nudes to Max and offering to give him a blowjob in the bathroom, failing both times. She then turns onto Maya for a short reconciliation until Maya finds about her “babysitting” (the word she used to hide the true nature of her work from family and friends). She realizes that Max hired her with Kim’s money when she learns that Kim is the breadwinner. This instigates her further, and she launches a full-blown attack on Max with veiled threats and indirect references to their relationship. The use of plucked strings ( similar to JAWS), evokes a feeling of chilling nervousness, akin to a suspense thriller/horror film. In one particular scene, she snaps at everyone for infantilizing her with a song that her father, Joel, used to sing to her when she was a baby. The music builds up the tension well up to the point she loses her calm while casting shady insinuations at Max.

Related Read to Shiva Baby (2021) : The 20 Best Female Filmmakers of All Time

Her mother’s attitude to her plight makes things worse for her. She even tries to open up to her but refrains from divulging too much information. She feels she has failed to live up to the high standards of expectations set up by her parents. She refrains from speaking her mind on multiple occasions.

The claustrophobic compositions (especially when she is crammed between multiple individuals, centrally framed), remind me of The Graduate (1967), where Benjamin goes through a similar ordeal at a family function. Insufferable guests surround both the characters, making it difficult for them to even breathe. Their plight is similar in some aspects – the search for a stable anchor amidst the turbulence of youth. The uncertainty about the future lingers over them throughout the film. When Kim forcibly entrusts her baby into Danielle’s arms to test her “babysitting” skills, it comes as no surprise that she has a breakdown. She is fed up with juggling the weight of expectations and her elusive search for autonomy amidst a sea of scornful sailors.

Also Read: The Representation of Women in Film Noir

Temporary relief comes at last when the family finally decides to leave the Shiva. Maya listens to her motivations behind sugaring and accepts her perspective. When she dejectedly sits in Joel’s omnibus, she is comforted by Maya, who holds her hands affirmatively. The slight assurance that Danielle receives from her gesture is immeasurable. The future is still uncertain, as Max and his wife and her parents are also in the same vehicle. However, the torture she has endured over the last one and a half hours (the film takes place mostly in real-time) makes the hopeful optimism in that small act larger than life.