When the purgatory times of the pandemic hit, everyone’s life got upended — especially the human connection and the rhythms of our closest relationships. The second installment of Amazon Prime’s portmanteau film Putham Pudhu Kaalai taps again into the epoch-altering epidemic and challenging period of the lockdown necessitated by the second Covid-19 wave to feature stories of love, hope, resilience, humanity, and new beginnings. Titled Putham Pudhu Kaalai Vidiyaadha (Waiting for a Brand New Dawn), this pandemic-themed five-episode series captures a medley of emotions evoked by personal discoveries and painful realizations in the toughest of periods.

The ultimate success of an anthology film lies in the impossibility of choosing a cherished favourite or the most interesting sequence among the array of short films. However, most of the anthologies fail to show consistency in their design that serves to bind them together, which in turn, conspicuously incite our temptation to rank the segments. When the compilation comes to an uneven mix of the good, the bad, and the mediocre, the whole often feels smaller than its parts.

It is unmistakably evident that the second edition Putham Pudhu Kaalai Vidiyaadha has surpassed its predecessor in representing the real emotions and sentiments in the life of ordinary people while its predecessor catered to the experiences of the urban cream of society with almost a blind eye to the sufferings of the working class. Riddled with generic and uninspiring stories, the first edition was lackadaisical and low in spirits except for some cheerful moments here and there, while the new segments rightfully deliver the relatable stories and how characters find closure or hopeful future alleviated from their deep and personal sea of troubles.

The anthology that focuses on the need for human interaction and intimacy to overcome one of the stressful periods of social and economic anxiety carries stories that are both personal and universal. In the order of their appearance, the segments are directed by Balaji Mohan, Halitha Shameem, Madhumita, Surya Krishna and Richard Antony. In this hit and miss project, Halitha Shameem’s ‘Loners’ steals the show while Madhumita’s ‘Mouname Paarvayaai’ and Richard Anthony’s ‘Nizhal Tharum Idham’ are equally fascinating for delivering authentic experiences and genuine emotions. Balaji Mohan’s ‘Mugakavasa Mutham’ and Surya Krishna’s ‘The Mask’ fail to connect and seems like a misfire amidst the other three well-executed ones.

Also, Read: Wild Tales (2014) is a lunatic on revenge and resurrection

Halitha Shameem’s ‘Loners’ turned out to be the most immersive experience (as far as I am concerned) as it tugs at the heartstrings for its poignant premise of loss and loneliness and finding solace and support at the most unexpected places. It follows Nallathangaal aka Nalla (Lijomol Jose) who recently broke up with her boyfriend during lockdown and Dheeran/Sky Gazer (Arjun Das) who is grief-stricken and guilt-ridden by the baggage of losing a friend to the pandemic. The duo first serendipitously met while attending an online wedding and later when they join an online video room called “Loners in Lockdown”. The short proceeds to a series of virtual conversations that play out so effortlessly and beautifully. They talk about living amidst the consumerist culture-driven toxic positivity and how we are not living anymore and only enacting our lives. Nalla draping the saree over her pyjamas for a zoom meet and feeling it to be a milestone to step out and throw away trash bags resonates with the pandemic limbo we are caught in. The virtual strangers who struck an unusual bonding and connection forged over grief draw the strength from each other to smile again by exchanging their vulnerabilities. Lijomol Jose’s expressiveness and Arjun Das’s restrained yet natural interaction strikes the right balance in their chemistry. It was refreshing not to see a romantic angle between the characters, but two people as connection seekers revitalising each other. Even if there are some rough edges over the usage of incongruous lingo, it is a delightful watch with great performances, beautiful frames and a cathartic ending.

Madhumita’s border-line silent film ‘Mouname Paarvayaai’ (Words Left Unsaid), featuring Nadiya Moidu and Joju George, is equally interesting as ‘Loners’ and it explores the interplay between a middle-aged couple Murali and Yashoda who live like strangers in the same house without uttering a single word to each other. The reason for their strained relationship is shown through a flashback where we see Murali breaking Yashoda’s flute after a major fight in a fit of anger. They stopped talking and started communicating in strange ways by grunting or clearing their throats, knocking on the door, ringing the calling bell, cutting vegetables vigorously, and writing on the blackboard to list out essential things. The taciturn world of the couple is mended and ice is broken when they are confronted by a disease that required distancing between people. The everyday drudgery of life leading to the fading away of words within the four walls of a household becomes the catchline for this narrative. Music takes a center stage in this mostly silent film and at times, it becomes jarring to deliberately not use dialogues. Nonetheless, with unbelievably effortless performance from the leads, it efficiently depicts what it is to care for someone without actually expressing it in concrete words. 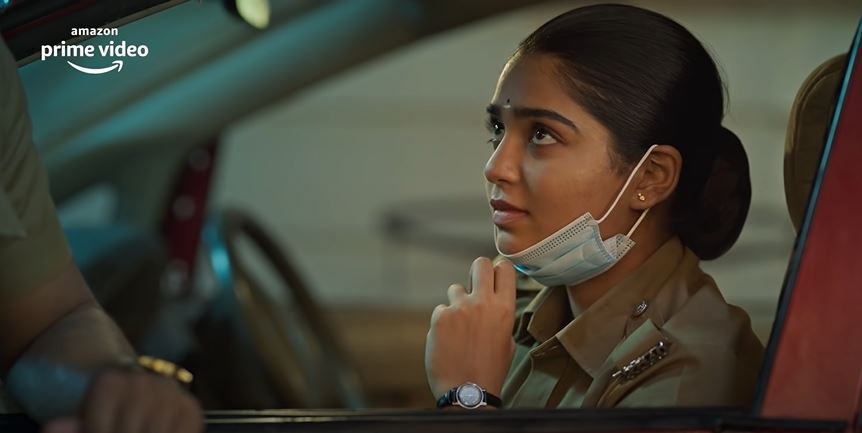 Richard Anthony explores life, death, grief and loss through his short “Nizhal Tharum Idham” (Comforting Shadows) and shows how building defensive barriers to protect ourselves from getting hurt can suffocate us, keeping us back from getting comfort and reassurance. It revolves around a self-reliant and independent Shobi (Aishwarya Lekshmi) who receives the news of her father’s sudden demise. She is also guilt-ridden like Dheeran in ‘Loner’ as she has not been active in attending her father’s calls and in visiting him back home in Pondicherry. Memories and thoughts of her father haunt her and in the near-climax moment, she indulges in a long and evocative soliloquy, pregnant with her inner thoughts, reflecting on how hard she struggles not to let anybody close yet how difficult it is to be alone. The loss of a loved one is also reflected in the character of Eric (Nirmal Pillai) who feels his relationship with his best friend has transformed since she started dating someone. Aishwarya Lekshmi shines in the spotlight for superbly portraying the inward journey of the protagonist. Shobi’s realisation to heal herself and to let people in makes it a profound narrative during these turbulent times when everybody is going through similar emotional rollercoasters.

The two short films that stick out like a sore thumb in this package are Balaji Mohan’s ‘Mugakavasa Mutham’ and Surya Krishna’s ‘The Mask’. The opening short ‘Mugakavasa Mutham’ (Kiss Over the Mask) is a soapy feel-good that explores the emotions of love and longing that got marred during the terrible times of the pandemic. It tells the story of two young cops Murugan (Teejay Arunasalam) and Kuyili (Gouri Kishan) who help to unite another pair of lovers during the lockdown. The story that ends with the eponymous kiss over the mask evoking a fairytale ending seems like a fluttery and frivolous effort insubstantial among the otherwise painfully serious stories. The oversimplified and generic story not only fails to capture the stressful job situation of frontline workers but also indulges in an overly preachy rant while telling people to stick to lockdown regulations.

Surya Krishna’s ‘The Mask’ is the least favourite and the most wayward and out of focus film of this anthology that revolves around an out-of-the-blue rendezvous between two long lost school friends Arjun (Sananth), a prototypical IT professional and Velu (Dileep Subbarayan), a gangster. Arjun, a closeted gay man struggles to come out to his parents despite the push from his partner Paul who feels devastated and exploited for not disclosing his sexual orientation. And Velu shattered by the sudden death of his beloved wife wants to quit his life of violence to make his son feel proud of him. The fourth wall breaking hero attempts to make the audience understand the struggles of the LGBTQ+ community who are stigmatized by the family and society. Despite introducing a sensitive and noble subject, it gets unbearably worse as it deviates from the central story of Arjun and Paul and falls flat for being emotionally inconsistent. This short metaphorically draws parallels between lockdown and the restricted existence of non-binary individuals. It suggests the masked lives of those who are unaccepted by the standard norms of society and urges to uncover the mask to come out of the isolated and suffocating closet.

In the second segment ‘Loner’, Nalla shares the grievance about how we are living in a different world now and how she finds it difficult to connect to films. As a film set during the life-altering pandemic addressing its anxieties and challenges and the growing uncertainty about the future, it mostly connects with you thanks to the outstanding performances by Lijomol Jose, Aishwarya Lekshmi, Arjun Das, Joju George, and Nadiya Moidu who breathe life into these films. Despite the anthology hitting more than it misses, it might look muddled because of the underwhelming plotlines among the standout ones. The film cannot boast of high profile directors but it is definitely a better assortment than its below-average previous chapter. The promise that hope, resilience and a new world are around the corner is something the film offers and the silver lining everyone wishes for at the end of the day.