Thor: Love and Thunder Movie Ending, Mid-Credit and Post-Credit Scene Explained: After doing the tough task of redeeming and frankly diverting the MCU into more fun, frolic end with Thor: Ragnarok, Taika Waititi is back with a tonally inconsistent and empty spectacle that doesn’t just lack laughs, but also lacks levity. Resulting in a straightforward saga that moves from point a to b without wasting an iota of its time on anything that is even remotely memorable.

Taking place after the events of Avengers: Endgame, where Thor is tagging along with the misfit group of The Guardian of the Galaxy; taking up space adventure as his new hobby, a new threat is on the loose. Gorr ( played by Christian Bale), who is now famously known as ‘The God Butcher’ is out for blood.

Since he has decided that all Gods are unnecessary and should be abolished, Asgard is definitely his next target. Thor, who gets a hint of the news about Gorr killing Gods from one of his own friends, must part ways with the group of misfits and go on a new space adventure with his new friend and confidant Korg (Taika Waititi).

Simultaneously, we meet Dr. Jane Foster who is suffering from stage four cancer and is currently looking at alternatives other than science to get out of the mess. Just when she checks out books about Norse Mythology, she hears a call from Mjölnir (Thor’s now-broken hammer that is put on display in the new Asgard for tourists). 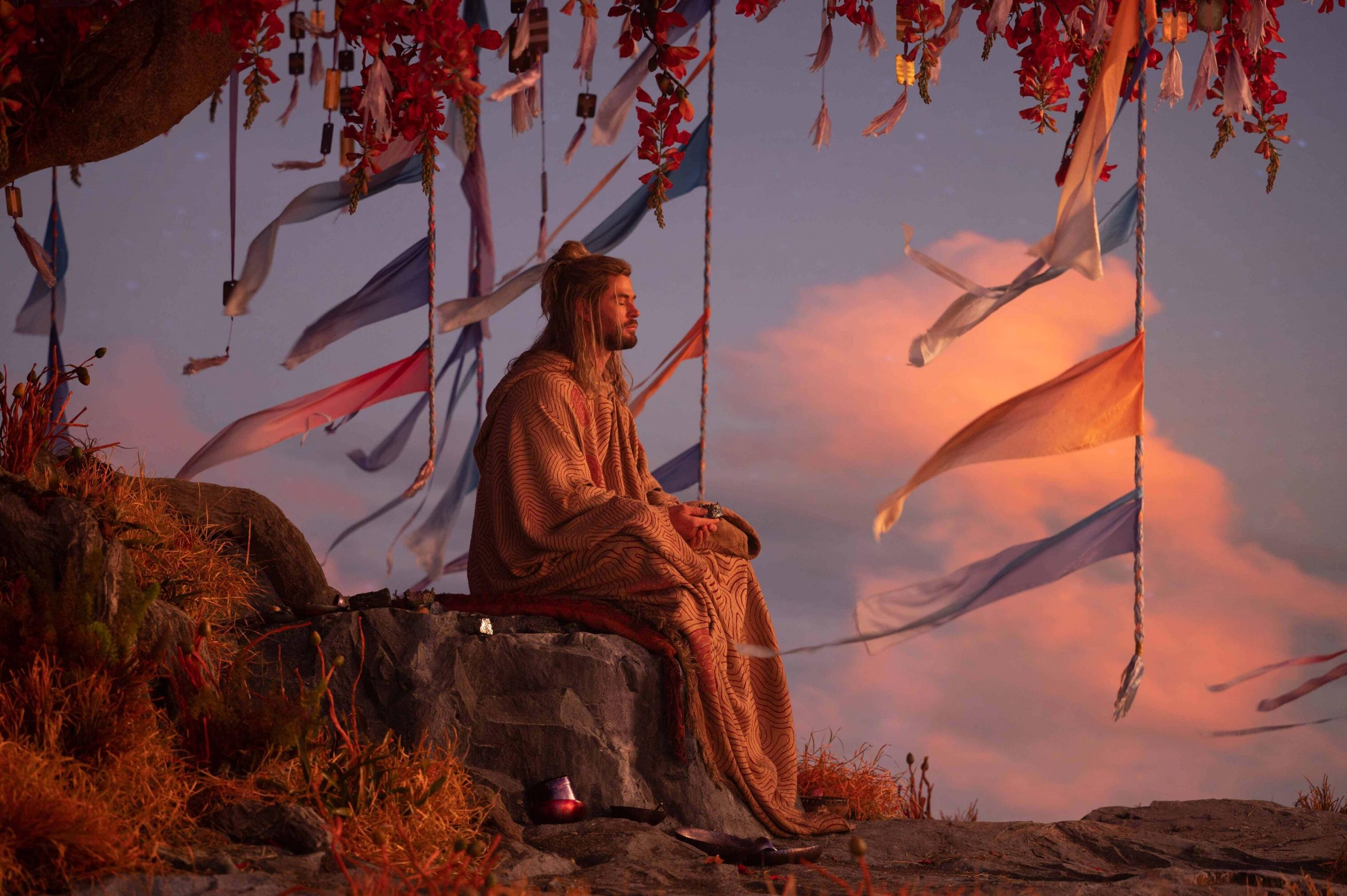 Thor and Jane cross paths when a fight breaks between Gorr, his shadow army, and that of Asgard. Thor is surprised to see Jane, who has now transformed into the ‘Mighty Thor’ and helms the Mjölnir. But, before they can catch up, Gorr takes all the children of Asgard hostage and flees.

The two of them then discuss with King Valkyrie and Korg how they can retrieve the children and save all the Gods and the universe from Gorr’s wrath.

Why does Gorr wish to kill all the Gods in the universe?

Gorr was a dedicated disciple of the God Rapu. His faith in him made him pray to him even when he was stranded in the desert with no means of survival. However, when his daughter died fighting for her life and when he came face to face with Rapu, he found out that Gods are actually just self-absorbed people who don’t think much about anything other than themselves.

When he is there talking to Rapu, pleading and asking for the reason for his wrath upon him and everyone that worships him, the darkness of the sacred blade named “Necrosword” (which is just casually lying there) takes over him. His newfound realization, coupled with a vengeance for his daughter and the manipulation of the shadowy deity in the sword, leads Gorr towards darkness and he takes it upon himself to abolish every single God in the universe.

How does Jane become ‘The Mighty Thor’?

While this is not explained by the director explicitly, one can assume that it has something to do with the ‘Love’ Thor and Jane share/shared with each other. Through flashbacks and expositions, Taika Waititi shows us that there was a time when Jane and Thor were deeply in love with each other.

Their bond was so strong that it somehow got ingrained in Thor’s Mjölnir. So, when Jane realizes that she has stage four cancer (where science can’t help), she turns to Norse mythology and is then called up by a voice.

She follows the voice and it leads her to the new Asgard where the broken Mjölnir reacts to her presence. Next, we only see her directly when she is ‘The Mighty Thor’ fighting along Thor against Gorr’s attack on Asgard.

One can only assume that Mjölnir is helping her fight Cancer, or is temporarily letting her become a supreme being so that she can fight her fight on the battlefield before succumbing to death.

Where has Gorr kept the children hostage? How do Thor and his friends get to know about it?

Gorr has taken the children hostage in the shadow realm. It is a planet in the far beyond where no color or light can take ground.

Thor and the others get to know about the shadow realm when Axl (Kieron L. Dyer), Heimdall’s (Idris Elba) son uses his father’s powers (which are slowly becoming a part of him), to communicate telepathically with Thor.

What is Omnipotence City? Why do Thor and the others take a detour to it? 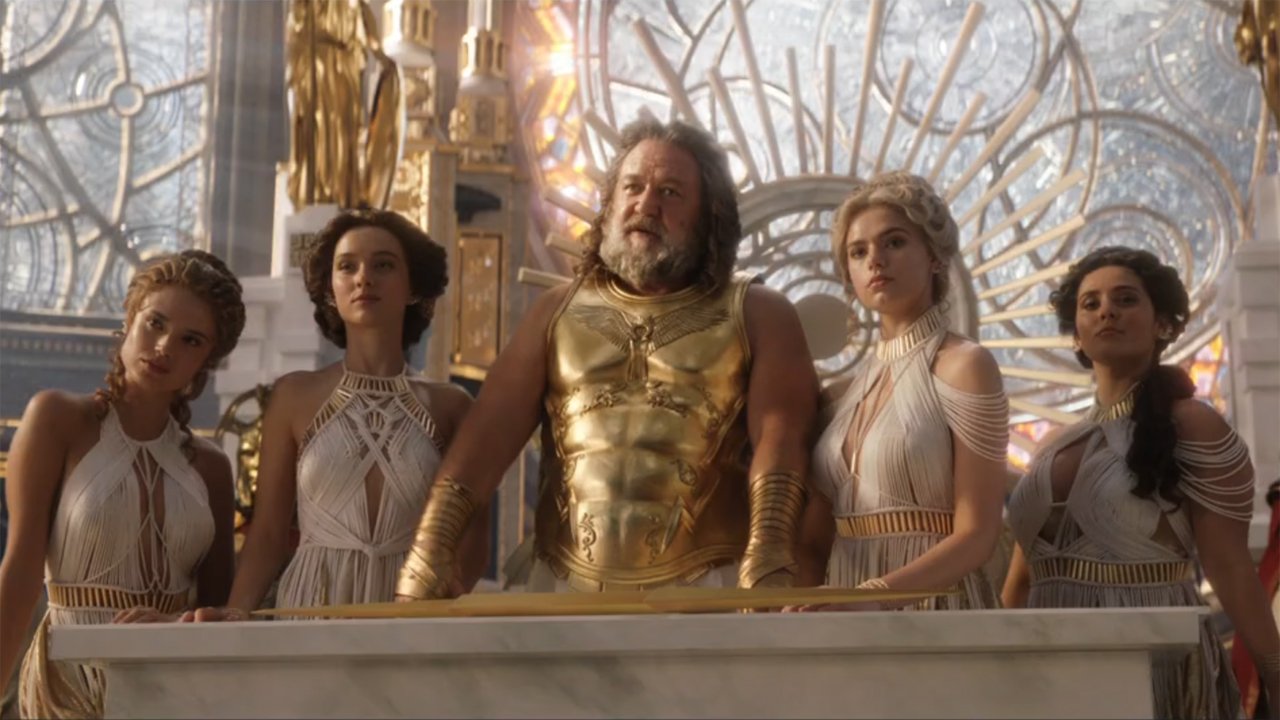 Omnipotence City, within the MCU, is designed as a meeting ground for all the Gods in the universe. However, in Taika’s cheeky universe, it is a place that is invite-only.

So, when Thor, Jane, and Valkyrie are discussing the prospects of how they will fight Gorr, going to find help from the other Gods feels like the right detour.

However, since the place is invite-only, they disguise themselves and sit in the meeting hall that is hosted by Zeus (Russell Crowe). Thor is someone who looks up to Zeus as a hero. But he soon finds out that he isn’t what he thought he is.

When he asks him for help, Zeus tells him that it doesn’t concern him that the God Butcher is on the loose. Instead, he tells Thor that he should also just let him be and station himself in Omnipotence City where he will be safe from being killed.

Does Zeus help Thor and his friends? What happens to him?

Zeus was a hero for Thor but when he shuts him down by saying that he will not help him, Thor realizes that he is just a coward. So, Thor, Jane, and Valkyrie decide to take route B and leave Omnipotence city. But, Zeus is fearful that if they leave the city, their departure will lead Gorr right back at them.

So, a fight breaks out where Thor, the God of Thunder ends up killing Zeus with his own Lightning Bolt. Thereby, taking it with him so it can be used in the fight against Gorr.

What is Gorr’s real purpose behind abducting the children?

While we initially feel that Gorr has abducted the children so that he can lure Thor, Jane, and Valkyrie to the shadow realm (where he is obviously more powerful and has an upper hand) and kill them, we later realize that he has ulterior motives.

Making them come to the shadow realm was to get his hands on Thor’s axe the ‘Stormbreaker.’ It is the only thing that would help him open the gates to Eternity, allowing him to make his one wish of killing all Gods at once come true.

After fighting with Gorr in the shadow realm, Thor, Jane, and Valkyrie narrowly escape his clutches by using the Bifrost. However, on their way out, Gorr manages to nab Thor’s Stormbreaker.

He then takes the axe and uses his strength from the Necrosword to proceed towards the gates of Eternity. He still has the children captive; so back in Asgard, Thor decides to get to him alone as becoming The Mighty Thor has aggravated Jane’s cancer, and Valkyrie is engaged and hurt as well.

Alone and without his axe, Thor decides to go back to fight Gorr one last time. He then arms himself with Zeus’s (Russell Crowe) thunderbolt and Bifrosts himself just in time to save the children from being crushed.

He then gives all the kids a part of his thunder power since he believes that fighting Gorr alone wouldn’t be easy.

Both, the children and Thor put up a fight against Gorr, but since the power of the Necrosword has also increased, Thor loses and is about to be pummeled by it when Jane shows up.

While Jane fights him, Thor manages to rescue Stormbreaker from Gorr’s clutches. They also manage to destroy the Necrosword in time, but the gates of Eternity still open up. However, since Gorr is no more under the spell of the sword and is obviously more reasonable, Thor and Jane convince him to ask for his daughter’s resurrection instead of killing off all the Gods. Since the darkness of the sword has also consumed Gorr, he is about to die like Jane, but Thor promises that he will take care of his daughter after he is gone. The ending of Thor: Love and Thunder slowly puts everything back in its right place. Gorr’s daughter appears from within Eternity as he dies looking at his daughter one last time. The children of Asgard return home where Valkyrie decides to train them in combat, should a similar situation in the future arrises. Korg also returns back to his original form after being dissipated in Omnipotent City and decides to hold hands upon lava with his new lover Dwayne, so that he can have a rock baby.

The final sequence shows that Thor has adopted Gorr’s daughter, who is now named ‘Love.’ She also has powers like Thor and can yield Thor’s Stormbreaker. Thor is also reunited with Mjolnir and Love and Thor form some kind of alliance to beat the bad guys; making the film’s title ring true.

Thor: Love and Thunder Movie Mid-Credit Scene Explained: Is Zeus alive? Who does he recruit to kill Thor?

Yes, the mid-credit scene in Thor: Love and Thunder show that Zeus is alive and kicking. The thunderbolt went right through his chest, but he still managed to dodge death this one time. The sequence shows that he is clearly pissed at Thor. He also claims that the world is slowly losing its faith in Gods and that superheroes are the reason for it.

So, to take Thor down, he recruits Hercules. Played by Brett Goldstein of Ted Lasso fame, Hercules, the God of Power was a rival of Thor in the comics before they eventually became allies and fought beside each other.

It is said that the future installments in the MCU might see a battle between Thor and Hercules, but for now, it is an exciting new addition to phase 4. Seeing Hercules slowly turn from a bad guy to a good one can be interesting to witness.

No, as much as all of us would want it to be true, Dr. Jane Foster a.k.a The Mighty Thor is not alive. The end-credit scene in Thor: Love and Thunder find Jane appearing at the gates of what feels like heaven at first.

However, we soon realize that it is not heaven, but, in fact, Valhalla. For those of you who don’t know, Valhalla is a place where Viking warriors who die in battle reach after their deaths. We also know that it is Valhalla because Jane is greeted at the gate by Heimdall, who was killed by Thanos in Avengers: Infinity War.

The scene ends with Heimdall welcoming Jane into Valhalla, thanking her for helping his son Axel.

Also, Read: All Thor Movies, Ranked From Worst to Best

Where to watch Thor: Love and Thunder