There are so many untold stories about World War II. So many unsung heroes and tragedies that have aged in negligence ought to be retold. These stories are important. One such story is taken up in Railway Children, directed by Morgan Matthews. Based on A Treatment by Jemma Rodgers, and inspired by the Lionel Jeffries film The Railway Children, this historical drama revolves around the cruel ordeal of parents sending their children away from the cities and into the countryside.

Modeled itself as a sequel to the 1970 film of the same name, Railway Children makes an admirable attempt to capture the innocence of children in contrast to the horrors of the war, but fiddles away in poor storytelling. If you are still a little too directionless as to what exactly happened during that chaotic climax, wait no further. Read the detailed analysis that follows. For those who haven’t seen the film, the request is to read this piece afterward. Happy reading!

Railway Children sets the story right in the midst of the second world war, in 1944, when the German troops are wreaking havoc on Britain. Three siblings Lily (Beau Gadsdon), Pattie (Eden Hamilton), and Ted (Zac Cudby) are sent off to the countryside by their mother who bids them an emotional farewell. In the small countryside of Oakridge, they are taken in by schoolteacher Annie (Sheridan Smith) and her mother Bobbie (Jenny Agutter, in a lovely performance, who also returns from the first film where she played the child) since no other family is ready to take the three together.

Ann’s son, Thomas (Austin Haynes) provides necessary company and adds to their local knowledge. The children play around and explore the place, that has railway tracks in the surroundings. One day, while playing hide and seek, they find out one of the American soldiers named Abe (KJ Aikens). Abe is hiding for a mission. The children assume that he is a spy, but he is actually trying to go back home.

The children make a hideout for Abe and promise him to help in their capacity. In the meantime, troops arrive on the lookout for him. Lily escapes one night from the window to provide first aid to Abe since he has hurt his leg while hiding. During this time, there is a sudden blast in the area that shocks everyone. Both Abe and Lily realize that is getting increasingly tough to remain in this village and the only escape is to hide in one of the carriages of the railway line. 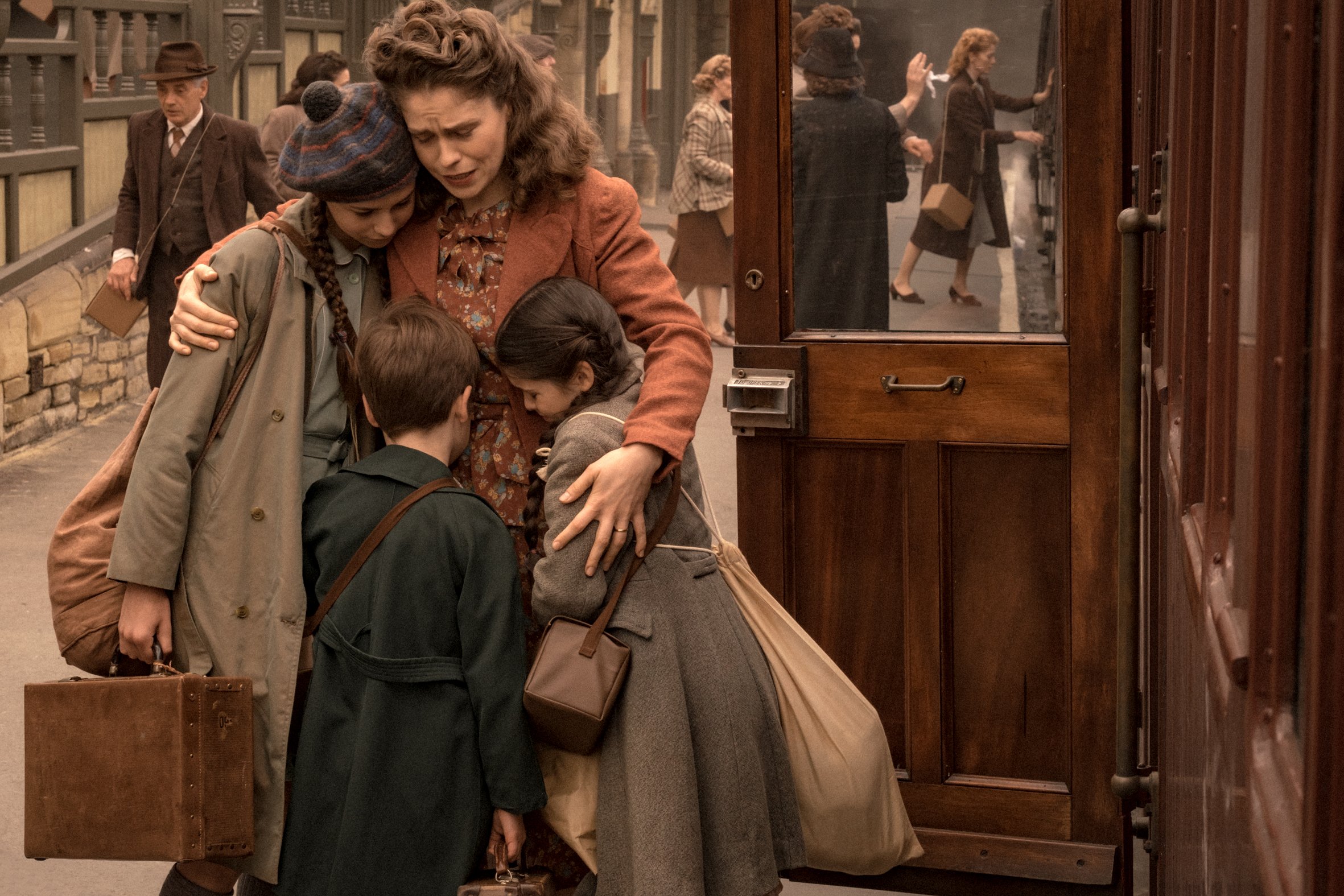 Lily promises to help Abe in his escape, and Thomas diverts the attention of the station master at the signal. Both of them get onto the train and hide, but eventually, they are caught by the troops on the train. The local boys realize that if they don’t stop the train both Abe and Lily will be imprisoned and taken away. When their stop signs don’t work, it is Thomas who stands by the tracks to ultimately make the train stop. The Colonel gets down and hears them out. Both Lily and Abe are taken out and it is revealed that Abe is merely 14 years old and not suitable to serve in the war. He is granted freedom along with Lily, and the children rejoice in this occasion.

Railway Children starts off with a lot of promise but what instantly sets the proceedings on the wrong foot is the inconsistent tone of the film. Screenwriter Danny Brocklehurst is so focused on warming up to the awkwardness and innocence of the children that the film forgets that there is a war raging in the background.

There is no depth in the proceedings of Railway Children, as the conflicts arrive and then resolve themselves without any restraint. The local boys are bullying the children? Lily teaches them a lesson. There is a spy in the hideout? The matter rests when Abe tells the truth. Thomas’s father is dead? The mother rarely mentions it, except for that fleeting teary-eyed moment in the end. Nothing really sticks, everything seems to work out. No wonder the end feels predictable from a mile.

The performances are barely there- none of the kids come up with any memorable echoes, they can do as much as they are told to do so. The cinematography by Kit Fraser doesn’t give much scope for us to situate in the minds and hearts of these characters. It is all from a distance, the amiability feels needlessly sugar-coated at times. In this retelling, the intention might be no noble but the execution is not.

The unforgivable part is how Railway Children compromises on Abe’s situation, where the real-life racism that occurred between black soldiers and the white military, is shelved way too long to then rush it all into a contrived and hurried resolution. It does not work at all. More so, Thomas running ahead of the train and stopping it- an act that is both illogical and dangerous is made heroic. Disappointing to say the least. The children, and the retelling, deserved better. 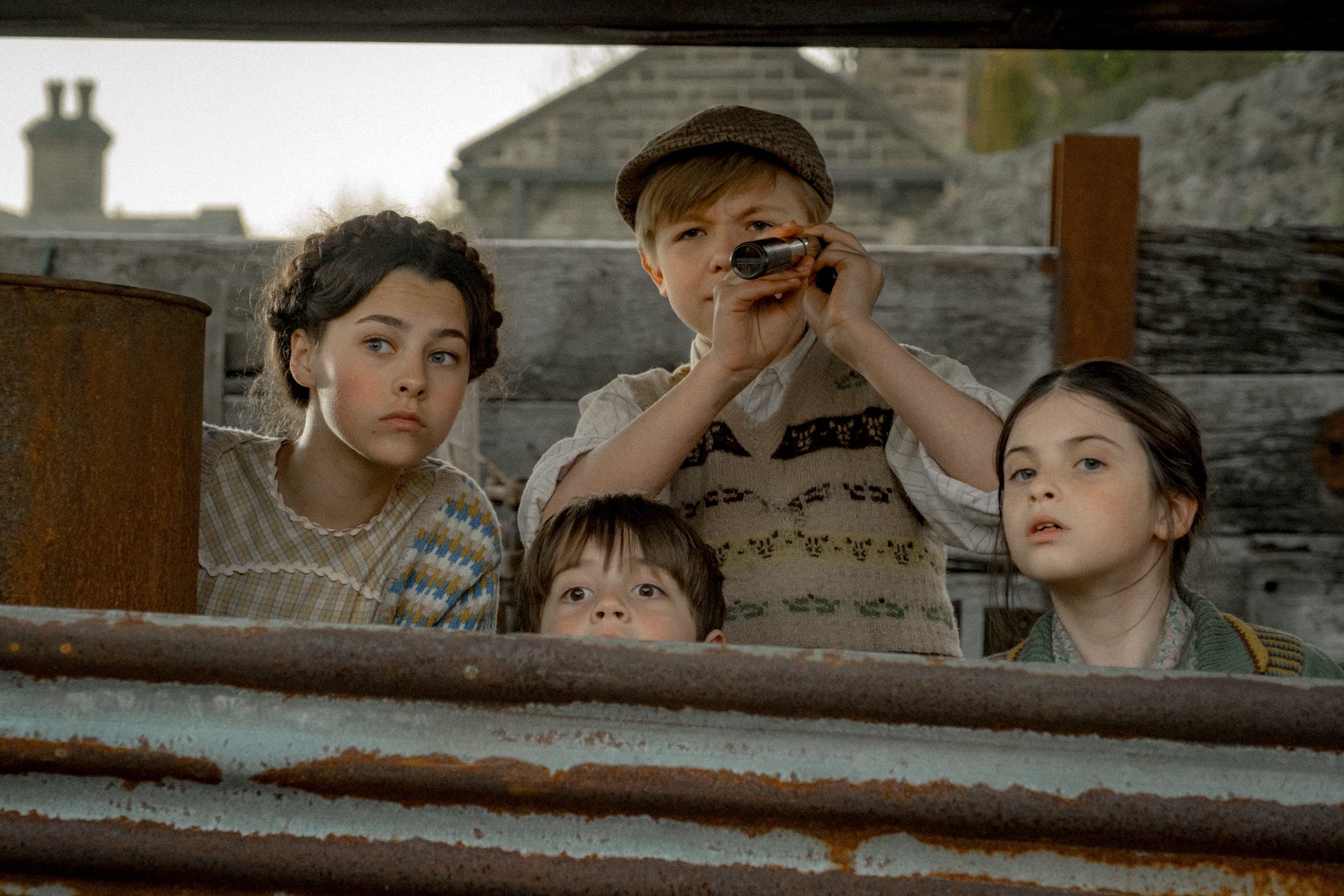 Can the children rescue Abe?

The end of Railway Children hinges on the prospect of whether the local children will be able to rescue Abe and Lily from the train or not. Well aware that they are now caught and taken outside, the local children assemble under the leadership of Thomas to take matters into their own hands.

They decide to arrange for a big cloth and write “Please don’t move forward” in red. Annie and Bobbie watch them from upstairs (without helping and smiling). The children then take the cloth near the train tracks and wait for the approaching train. As the train arrives, they shout with all their might and wave the slogan. The Colonel who is sitting by the window cabin sees this but doesn’t pay much attention. Now Thomas moves ahead and stands by the tracks. The train carriage is forced to stop and the Colonel steps out to see what’s the matter.

The children demand that let them be taken as soldiers too, or else their friends who are now being held captive be released immediately. By this time, even Annie and Bobbie have arrived. The Colonel, unaware of this, instructs his fellow men to bring the two out. Abe and Lily and brought out in handcuffs, where Abe recounts the torture and tragedy that has been inflicted upon him.

He shows his birth certificate – his birth year is 1930, so he is just 14 years old. The Officer realizes the issue and releases them both immediately. The children rejoice and play out in the neighborhood field in careless abandon as the film draws to an end. The end credits show that Lily, Pattie, and Ted went back home to stay with their mother, and Abe has reunited with his family after all.

Where to watch The Railway Children Return

The Infernal Machine (2022): Movie Review & Ending Explained - Who is DuKent and what does he want from Cogburn?