Home»Explainers»The Infernal Machine (2022): Movie Review & Ending Explained – Who is DuKent and what does he want from Cogburn?
Explainers/Reviews/VOD

Andrew Hunt’s The Infernal Machine goes back to the absolute basics of a psychological thriller; a troubled protagonist, a slowly unveiling mystery about his past, and an unknown sinister presence that will be revealed at the climax. And the slow burn start that leads to the nail-biter suspense, ironically enough peaks into a reveal that is at best, basic. Guy Pearce’s somewhat Salinger-like reclusive lead who has been keeping himself away for decades, is definitely a treat to watch; as is his eventual emotional unraveling. Adapted from The Hilly Earth Society podcast, The Infernal Machine builds up the anticipation way up high with its impeccable setup but the bubble bursts as soon as the mediocre climax takes place.

Bruce Cogburn’s (Guy Pearce) quiet, secluded life that he had designed to keep away from the world because of the controversy that surrounds his first and only book, gets disrupted when he starts receiving a disturbing amount of letters and packages from a mysterious admirer; William DuKent. Frustrated with the constant mails, Cogburn travels 14 miles away from his disconnected home and goes to a phone booth to call DuKent. Despite the messages he leaves on DuKent’s answering machine, asking him to stop sending letters; Cogburn’s frustration keeps on growing with DuKent’s relentless mails.

Cogburn’s isolation is the result of the tragedy that his book “The Infernal Machine” had inadvertently caused. 25 years ago teenager Dwight Tufford (Alex Pettyfer) took a shotgun, went up to the university tower in Knoxville, and murdered over 13 people. Dwight claimed that the book convinced him that God perceives people’s mortality as the fall of dominoes and that by killing them he wanted to take the power away from God. Guilt-driven Cogburn’s life now consists of a secluded home, alcoholism, PTSD-induced nightmares, and a gun he keeps to scare trespassers away.

Uncomfortable with DuKent’s obsession, Cogburn’s paranoia takes over and he feels as though he is being followed. Seeing a red car far out on the road that leads to his house, sends him down an anxiety spiral. He gets a dog in order to be alerted of any unwanted visitors. The red car comes around again and it turns out to be the mail service employee dropping off the letters. One instance of drunken impulsiveness gets him to call DuKent, leave multiple incoherent messages, and pass out in the phone booth. He is driven back by Officer Higgins (Alice Eve) who recognizes him as the author of the controversial book.

Driven by his morbid curiosity, Cogburn invites DuKent to meet him at a local dive and to his surprise, DuKent stands him up. On his way back home he stops at the mail service office hoping to find out the origin address of the letters. He discovers that the red car doesn’t belong to the company and is convinced that the man at his house was DuKent himself. He meets Higgins and her daughter at the park and informs her about the development. His dog runs off when he’s done leaving a threatening message for DuKent and he discovers the bizarre cabin beside the phone booth. Being in a room covered from walls to ceiling with the pages from his book and seeing not just the model of the Knoxville shooting but also DuKent’s answering machine itself, strips down his veil of sanity.

Finding out from DuKent’s answering machine that he had contacted Dwight; Cogburn goes down to the prison to meet him in hopes of discovering DuKent’s identity. While going back home from their cryptic and violent meeting he receives a call from his agent who claims that he has received Cogburn’s new book. He asks his agent to fax the book and is shocked beyond imagination upon finding out that it narrates every message he has left on DuKent’s answering machine, every interaction he has had with anybody recently, and everything he has been up to even in the privacy of his home. 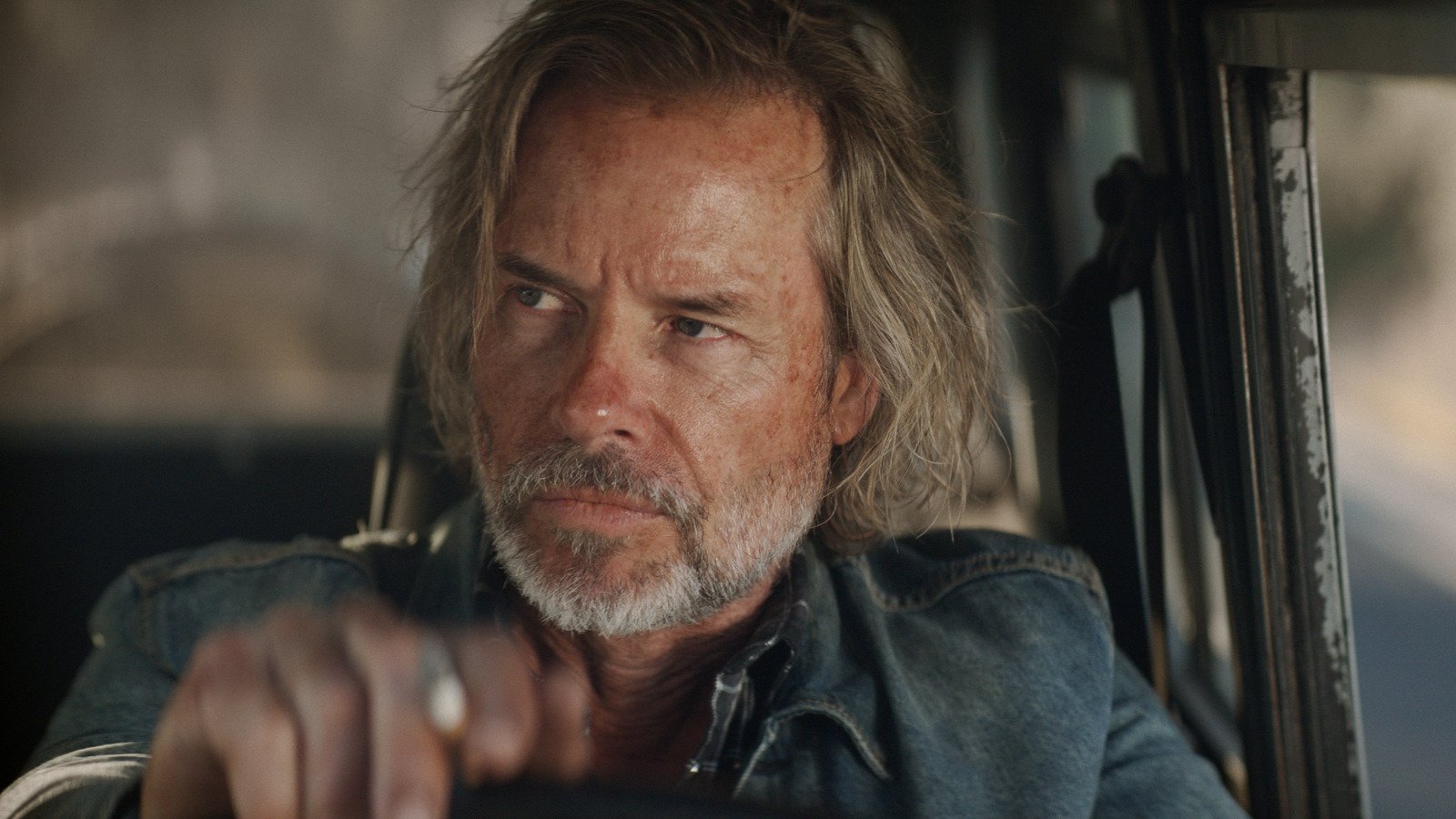 After a panicked search, Cogburn finds a listening device on his dog’s collar. Angered and frustrated beyond his limits; Cogburn calls DuKent whose name, as he now knows, is an abbreviation made up of the Knoxville victims’ first names. He promises DuKent that he will live a life so boring that it would ruin the ending of DuKent’s book. His promise, however, fails to come true when he finds out that Higgins was in fact a piece in DuKent’s puzzle, hired to manipulate him.

Hunt’s protagonist being both the body and the soul of this lukewarm suspense thriller is one of the very few things, or perhaps arguably even the only thing that makes the movie a reasonably okay watch. Pearce’s Cogburn is in all sincerity, a slam-dunk when it comes to portraying a morally questionable author with a noticeable cowboyish flair of macho-ness that seeps out through the cracks of his stereotypical, wannabe hermit personality.

His emotional turmoil, however, is very real and convincing; props to both Hunt and Pearce. But even with such a perfect lead a movie can not be saved if everything else around him barely gets any attention. What seemed to be an exciting start of an ominous rapport between Cogburn and Higgins, was cut short by the writer’s short-sightedness. Had that been explored further, especially considering Alice Eve’s praiseworthy performance in the little screen-time she was offered; perhaps the time leading up to the climax would’ve been tenser, and perhaps going subtle with the tension wasn’t the right decision for this story.

A lot of the sinister build up being atmospheric and evocative sees success in the hands of Sara Deane’s committed cinematography. It was as though Cogburn was made for that setting and vice versa. A lot of promises were made by such a build-up carried on the shoulders of Pearce empowered by the vast and dreadful imagery. What it leads to, however, is an antagonist who simply isn’t convincing as someone with enough baleful consistency to put Cogburn through such a delicately constructed puzzle of misery and torture. Had the writing not spent all of its willpower on creating a perfect protagonist, maybe the movie would have ended up being more than just merely watchable.

Who is DuKent and what does he want from Cogburn?

The escalation of the suspense begins to find its release when Dwight breaks out of his maximum security prison and attacks Cogburn with his own shotgun. He shoots Cogburn’s dog and his attempt at shooting Cogburn is stopped by Cogburn’s spur-of-the-moment tackle defense. When Cogburn shoots Dwight, his final words form the question that he and the audience have been waiting to ask for a long time. What is the meaning of his book? And Cogburn satisfies the inquiry with a sort-of-predictable answer. He does not know as he is not the author. 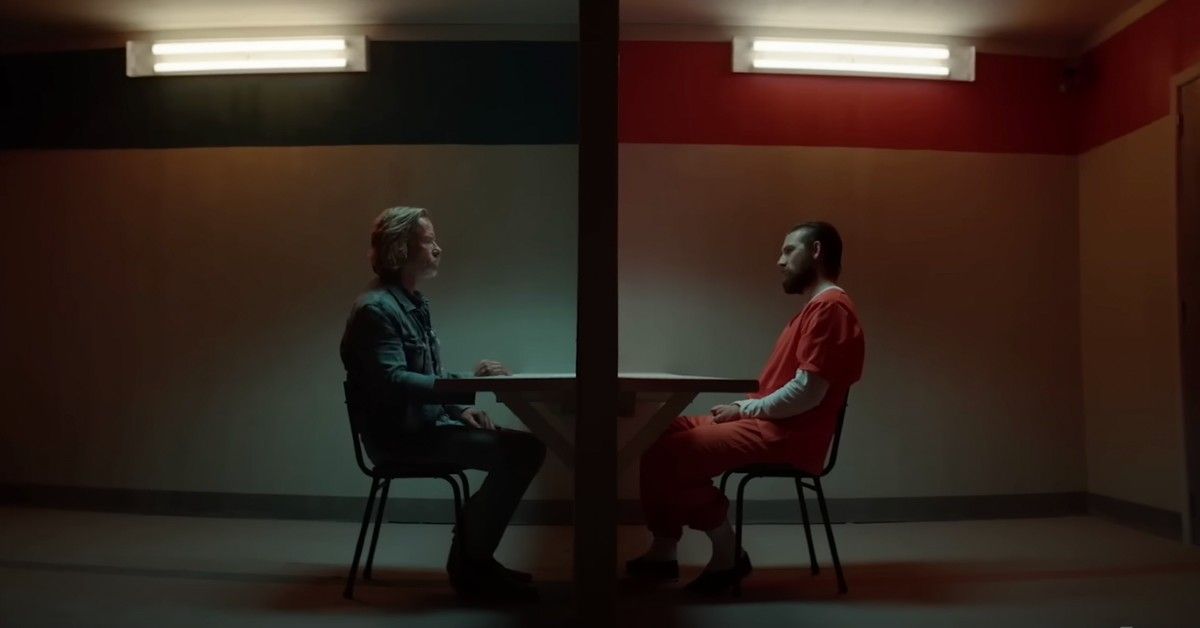 Sitting at the hospital, waiting for his dog’s recovery, visibly miserable Cogburn’s reminiscence drags us further along down the path of revelation. It is revealed that the book was in fact written by his disturbed student Elijah (Jeremy Davies), who after finishing the book, attempted to kill himself by lighting himself on fire, that too right in front of the eyes of Cogburn. Post the horrifying incident, Cogburn got to know that Elijah’s parents had decided to take him off life support and he proceeded to publish the book as his own work. At this point, it is also clear that Elijah’s hellish suicide attempt is the very incident that traumatized Cogburn and now haunts him in his nightmares.

When Cogburn instinctively goes inside the strange building beside the telephone booth, his lethal curiosity is morbidly fascinated by a domino effect created with random objects that are relevant to his life. And as he goes further within, to none of our shocks, he meets Elijah himself. The revelatory conversation that follows, sheds light on the final piece of the puzzle. While writing his first book, Elijah was of the belief that God is like a cruel child destroying innocent ants with a magnifying glass.

But in his 19 minutes long death that Elijah had come back from, he found nothing and certainly no existence of God. That incident changed his belief toward a more nihilistic perception of things. For him, there is now only cause and effect. Only dominoes falling; nobody giving a piece a push. Only ants dying; no magnifying glass. So in the span of 5 years, he has sent Cogburn down this frightening spiral to observe his reactions to everything and write his next book about it.

One significant stop in Elijah’s domino effect setup is the email sending his manuscript to the publisher. After deciding that he would let the world know the truth about the first book, Cogburn proceeds to leave with the letter he had written to his agent, only to be stopped by the extreme final stop of the domino effect; an explosion that kills Dwight and horribly burns Cogburn. Dead-set on his mission, injured Cogburn drives his car to the mail drop-box and crawls towards it with his burnt body to submit the letter.

It is evident from their interaction that Elijah held no grudge against Cogburn for stealing his book. He truly held Cogburn’s image way up high and saw him as the person who had inspired him the most. Sociopathic Elijah possessed only two sets of instincts; creation and destruction; as though he was God himself.