After Life (Season 3) Netflix Review: The third and final installment of Ricky Gervais’ polarising tearjerker is here. One that lays bare the path that Gervais wrote for our protagonist Tony. This saccharine, unapologetic dramedy is a bit like life itself – uneven in parts, prodding its audience to acknowledge the stages of grief.

The third season, in comparison to the previous two, does justice to the very being of my anti-hero, protagonist – Tony Johnson. The final scene is probably the most heart-rending one that Gervais will have in his name. It’s in the final moments of the show that Tony looks at the chaos that life is, the futility of fretting over life and death, but never for once cancels out that one will always be deserving of happiness, no matter what.

We know, from the earlier seasons that Gervais, who has always been so vocal about the welfare of animals, as is evident in his other works such as Derek, somehow just doesn’t care enough about his own species, as Tony. This is where the third season trumps the rest, clearing the air over some of the unanswered bits like – What is it exactly that could make Tony happy, if ever?

As someone who has already watched the previous seasons, you’ll know that he is often mean, prejudiced, arrogant, foul-mouthed and so self-absorbed that he misses out on everything else apart from his own grieving heart. However, the character comes a full circle this season, realizing that the pain he feels is permanent in nature but he wants to continue living life.

After Life, as a show in general, is not Gervais’ best, but surely is his most important work. It is that which bridges the gap between the overwhelming significance of form vs the written word, i.e. the story. The weight of the written word. When we see the three seasons as one complete unit, the show is a well-crafted argument towards the purpose of life versus the easy way out – death. And more importantly, why is ‘having a purpose’ so imperative towards true happiness?

The final season, simply put, is a good chocolate chip cookie. The right amount of soft coupled with a bit of crunch from the chip. The chips being the rest of the cast. That’s the thing about a well-written show, you mustn’t single out the protagonist. Much like this line from the earlier season –

“We’re not just here for us, we’re here for others.” 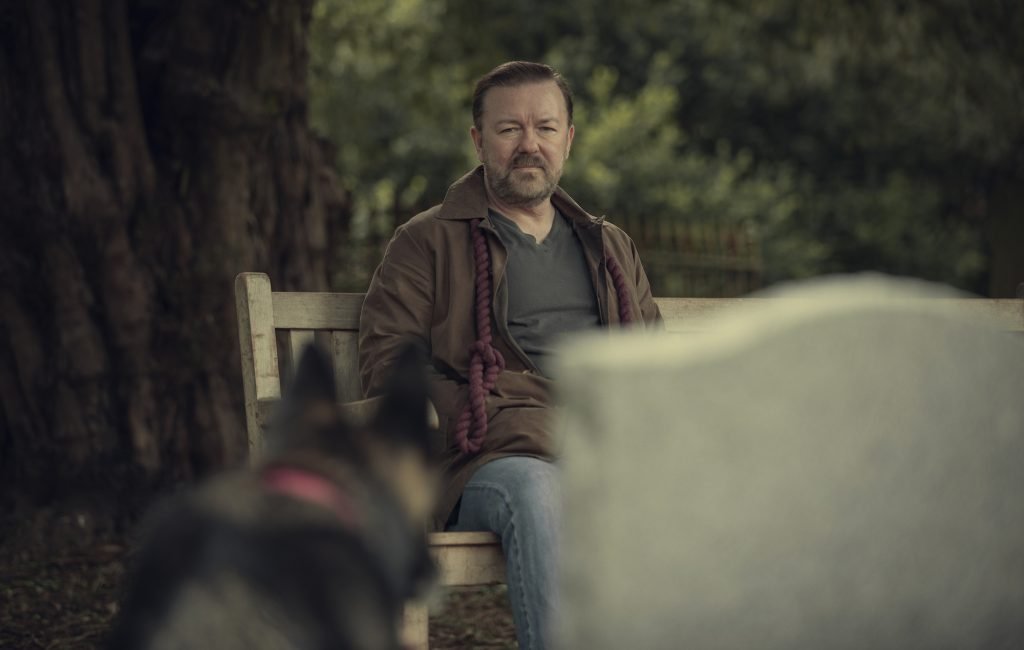 I am not sure about others. Personally, I had numerous questions about the rest of the cast. Will Emma take Groundhog Day forever? Does Kath understand the worth of her own company? And in that purview, the final season does not disappoint. It is a collection of moments, scenes, dialogues that lets the others flip the page to the next chapter in their lives. And no, I won’t be giving any spoilers here, you’re welcome!

Through an intelligent lens, After Life lets its audience look at the loss of life with respect, with humor. The lingering ghost of grief, a story of many misfits, a story essential to humankind. Here we condone the importance of a community, kindness towards each other, and the mundane nature of life.

The show flashes the mirror at a bunch of us but it would be wrong to selfishly depend upon it for just a good laugh. Albeit, there are some extreme LAUGH OUT LOUD moments. Trust me, I had to pause until I could stop laughing. But these moments are priceless, ones that can lighten the air, but never become the talking point. Addressing grief and beautifully so, will always be After Life’s most laudable trait.

And while we talk about how great a show it is, we must not forget the vibrant British cast involving Gervais himself and Goldiman conveying Lisa’s warm, generous spirit, in the scattered moments in which she appears.

For those wondering otherwise, After Life does not stop at the gargantuan sense of loss or the stages of grief. Some beautifully weaved in sub-plots – such as the brewing bromance between Brian and James, the ever so wonderfully self-reflective monologues by Tony, when he’s around Anne at the tombstones. A recollection of a wickedly deceptive scene that I have particularly grown fond of, where James lashes out at his agent Ken, bringing out the rawest thoughts from inside his head.

Everything said and done, the show has swaddled millions of hearts, without for once sugar-coating the struggles of a loss of a loved one. I for one was one of those million hearts, that relished the final season and will forever be happy to throwback to it every now and then, enjoying the many realities and idiosyncrasies.

And without further ado, it’s important to just say that Gervais has decided to move on, knowing the worth of not taking it too far. And here it is probably best to leave you with Tony’s sticky-note lesson to live by this season —

‘I thought not caring was a superpower. I was wrong. Kindness, making other people feel good, that’s the real superpower’