Slow Horses (Season 1), Episode 5 Recap and Ending Explained: This installment is the most action-packed yet, but it is also one of the more nerve-wracking episodes of this season. The writing, especially the dialogue delivery, is the perfect mix of droll British humor and outright comedic at times, but it is very much an espionage series, and this cocktail of the genre is hard to pull off. Slow Horses, so far, are pulling it off effortlessly.

Before we get into the latest episode, have a look at the recap of Episodes 4

Rendezvous at the cemetery

Louisa and Min climb over a fence to enter the cemetery where they are supposed to rendezvous with the rest of their teammates. A foolhardy physical exercise, we learn as Lamb walks calmly with Standish and opens the cemetery gate with keys on his person. Standish tries to persuade Lamb to reveal the secret about Charles that he had promised, but Lamb refuses, saying, “Read the moment.”

As Lamb and Standish rendezvous with Louisa and Min, Ho reaches out without Cartwright. Surprised but moving on, Lamb starts walking with his team towards the exit, recounting Diana’s plan to bury Slow Horses due to the latter’s incompetence. But before Lamb could explain further, Cartwright entered, having run from the hospital and huffing with exhaustion. Insulting Roddy for leaving him, he reveals to Lamb why Diana Taverner wanted him out of Slough House. 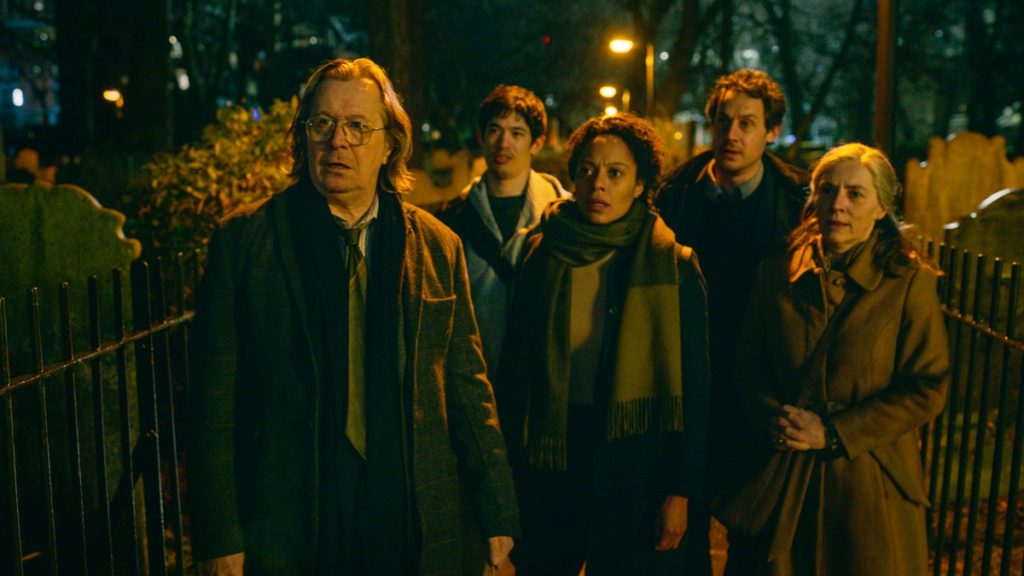 As previously mentioned to Sid, way back in episode 1, Cartwright had successfully followed Taverner as part of routine surveillance. What Cartwright now reveals to Lamb is who Taverner had been rendezvousing with—Alan Black, the man who had been Dian’s insider in The Sons of Albion and whose head was decapitated at the end in Episode 3. Asked whether he has any photographic evidence, River replies in the negative but assures us there must be a copy at Regent Park. Reluctantly, Lamb agrees to let River accompany him towards Regent Park while, as irascibly as possible, giving his other members a pep talk, advising them to stay out of the clutches of the “dogs”, or MI5 agents.

On the other hand, the kidnappers are on their weird journey with Hassan tied up. Curly, the current leader of the group, is adamant about killing the hostage because he truly believes that they should carry out the plan they had promised—decapitate their young hostage on live TV at 6:30 AM—and somehow, failing to do that would cause people to not take “The Sons of Albion” seriously. Zeppo, the second kidnapper and the most vocal dissident among the three, has had enough and brandishes a gun at Curly, threatening to shoot him, inadvertently taking charge of the group. It’s easier said than done as the getaway van has no petrol and they can’t afford to go to the nearest petrol station without attracting attention to their blood-spattered selves. Finally, Zeppo decides to untie Hassan, remove the gag from his mouth, and instruct him to fill the petrol for them without drawing attention to themselves, much to the chagrin of Curly.

Diana Taverner and Nick Duffy are shocked when they see Jackson Lamb arrive at Regent Park with Duffy’s car, which he had previously commandeered. Surrendering his gun, but not losing his Brit drollness, Lamb is escorted into Taverner’s office, where Taverner tries to bully him into signing a false confession. Undeterred and appreciating Diana’s machinations, Lamb throws a wrench in her plans by revealing that his car had a bomb and that it is currently in the basement. Alarmed, Diana sends the dogs, led by Duffy, to investigate the car. Unbeknownst to them, Cartwright, who had been smuggled into the headquarters in the boot of the car, had slipped out and was waiting for the dogs and managed to slip past them into the headquarters.

Knowing that he has limited time, River manages to confront James Webb, AKA Spider, in his office, where, after a scuffle, it is revealed that River had been sent to Slough House because he had unintentionally seen Diana hatching a plan with Alan Black and that the training exercise kerfuffle had been deliberate on Webb’s part. Knocking Webb out, River starts searching for the incriminating photograph, as the dogs, finally realizing they have an intruder, are swarming the offices systematically. River finally manages to locate the file named “Fiasco”.

Back at Diana’s office, she enters carrying the obviously dud bomb and hands it to Lamb, while remarking that the dogs will locate the intruder soon enough. However, Lamb refuses to sign the confession, and River reveals himself, managing to escape with the file and planting it at Diana’s desk. He had managed to dress Webb’s unconscious body in his clothes so that it looked like the dogs had caught the intruder. Back at the office, Cartwright reveals incriminating photographs proving Alan’s role in the kidnapping of an innocent Pakistani citizen and the second desk of MI5 being involved in some serious crime. With the ball in their court, Diana asks what they want, to which Lamb suggests finding the kid as quickly as possible by dedicating all their resources instead of utilizing part of their workforce to frame Lamb and Slough House. Unbeknownst to Lamb, his teammates are also trying to locate the van containing Hassan and the kidnappers.

Hassan manages to refuel the van without drawing attention to himself. Even as he sees news footage of his parents worrying about him, he decides to stick with the kidnappers. This warms their hearts, and they start to become friendlier with him when they learn that Hassan’s uncle is a rich man who would be open to paying them the required amount of money. According to Curly’s insistence that Hassan could accompany them only if he could make them laugh, Hassan starts cracking jokes that hit too close to the truth regarding the inherent racism towards Muslims. While that is the basis for good comedic moments in a standup routine, a van containing three kidnappers, one of whom is a murderous psychopath, isn’t the ideal place to crack such jokes. Inevitably, things completely derail when Curly, after a laughing fit, stops the van and blows Zeppo’s brains out, chuckling, “Now that is funny.”

Interesting revelations abound, especially regarding the actual reason for River’s exile to Slough House. However, that is done at the expense of showing MI5 as having contradictory abilities. They are shown to be incredibly competent, and yet, at times, incredibly short-sighted. Even though you are rooting for the slow horses, River managing to slip past so many trained MI5 agents is still a hard pill to swallow. The Hassan plot feels like it is moving towards a bloodier conclusion than before, but having been driven around for two episodes, the amount of time invested in this is starting to feel redundant. However, the chemistry between all the members of the Slow Horses and the offbeat humour of the show keeps it going. Let’s hope the final episode next week closes out this season successfully.