C/o Kancharapalem opens to the visuals of narrow, winding roads, single-story houses, and most strikingly the dark and vibrant faces typical of natives of Andhra Pradesh. If you pay keen attention to the lyrics of the folksy dirge (Ramadasa’s Yemi Janmanu) playing in the background of the titles, you can catch a sly forecast of the unexpectedly profound meta-narrative of the movie.

Venkatesh Maha’s directorial debut Care of Kancherapalem is set in a small town in Vizag by the said name. It is an anthology of four love stories that converge as confirmed by an unpredictable confession made towards the end of the movie. This confession comes from Raju, the much-harangued 49-year-old bachelor, who has spent the better part of his life forming a rather intimate connection with the town and its people who seem inordinately bothered by his being single. Raju’s love story takes off as a widowed 42-year-old woman joins in a senior position at the office where he works as an attendant. Raju played by Subbarao and “madam” by Radha Bessy are the oldest of all the couples we see. Their demeanor matched their calm but cheerful personalities. Starting with an innocuous introduction and leading to an early morning jog together, his bonding with her blossoms quite inevitably. However, he continues to address her as ‘madam’ throughout their up-in-years relaxed courtship, highlighting his basically shy and timid nature.

The other love stories include innocent child sweethearts Sunitha-Sundaram, teenagers Bhargavi-Joseph, and thirty-somethings Saleema-Geddam. The love stories are cooked on a slow flame. Compared to city-based modern-day dalliances, these stories build at a pace and in a manner that’s perhaps exclusive only to a small town in India. But the love itself is felt as viscerally as it is in any touching love story. 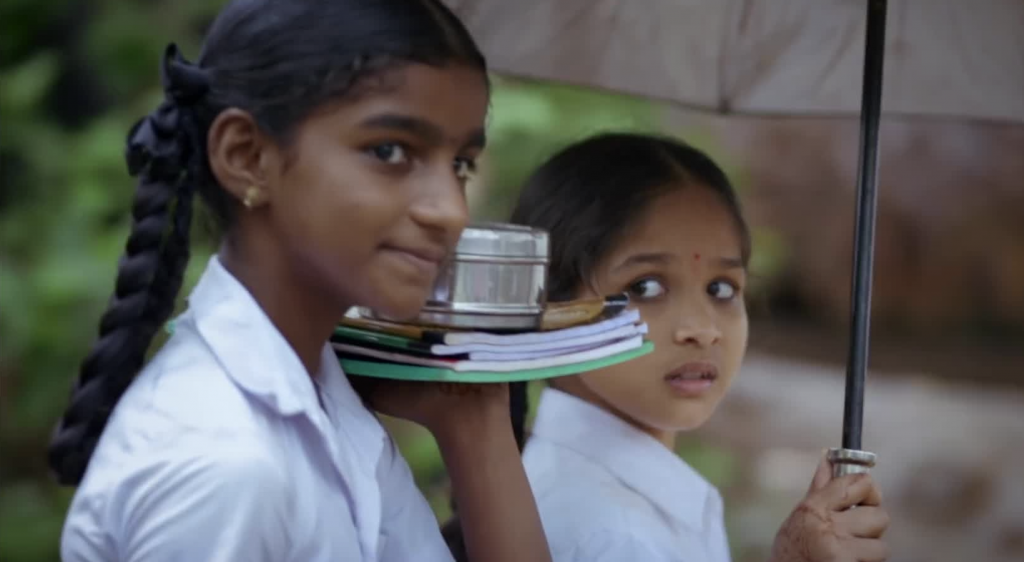 The child sweethearts played by Nithya Sree and Kesava Karri are true to the guileless and tender affection as can be experienced only by children, in the way they interact with each other. There’s a scene where the boy feels intimidated by the girl’s aggressive father slapping her into obeying him. It’s pivotal because it depicts the possible making of a feminist of the young boy who watches on helplessly, because he does, indeed, turn into a true feminist, eventually. Sharing of food from tiffin boxes, camaraderie with the motherly class teacher, and stolen glances across the classroom make their connection very raw and reminiscent of childhood to viewers of all ages. The teenagers played by actors Praneetha and Karthik are the ubiquitous lovebirds you can spot in any small town college cafeteria/campus. Their exchanges, driven by Praneetha’s firebrand-like outlook and Karthik’s smitten-as-a-kitten appeal, make you feel like rooting for their love.

Then there’s Saleema, played, as it happens, by the producer of the movie Praveena Paruchuri, at the behest of the director. Geddam, who’s Saleema’s hapless admirer, is played by Mohan Bhagath, whose gauntly handsome profile and mushy heart belie a strength of character not many men can honestly lay claim to. Aptly nicknamed “geddam” (meaning “beard” in Telugu) he plays the role of a shy, respectful but ardent lover, most convincingly. He loves her despite her working as a prostitute even during their courtship. And so selfless is his devotion to her wellbeing, that he even buys her prophylactics to use when she’s at work. And, of course, she reciprocates his affections despite her initial cynicism. As she just can’t help it, given his sincerity.

Among the secondary characters in the story, the gym owner Ammoru’s (played by Pastor) performance was noteworthy. He conveys just the right amount of avuncular concern without coming off as creepy.

All the couples speak, gesticulate and look like earthy, honest-to-goodness, real people that you would certainly bump into, were you to visit the city of Vizag. That’s the thing about this movie, it is a casting marvel, in that, it has launched over 80 non-actors into the field. This in itself is a refreshing change from the dynasty-dominated mainstream Telugu cinema where most actors are neither new nor inexperienced in acting. The background score is one of the strongest suits of the movie. Well-timed and stirring, I kept humming the notes for quite some time after the movie ended. Of the songs, Asha Pasham has an uplifting lilt just as Sottabuggalu is naughty. 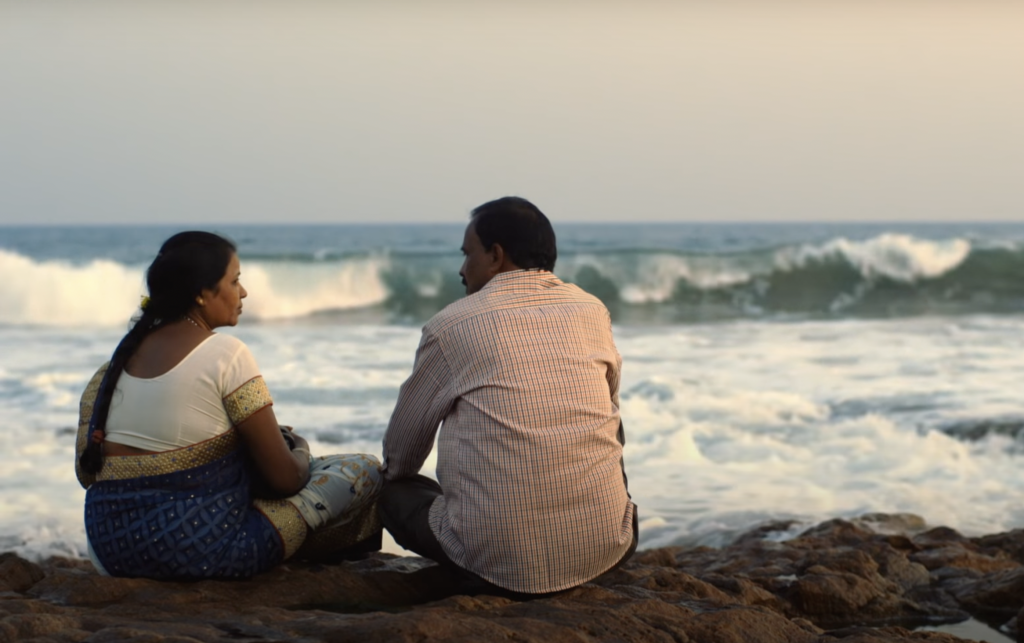 The most important thing about this movie is the number of social issues it covers through its multiple love stories. Unbridled patriarchy, gender-based double standards, misogyny, the dignity of labor, religious intolerance, discrimination against the disabled, homophobia, and whatnot.

In the story of Sunitha and Sundaram, the little girl’s father feels entitled to discipline his daughter, so much so, that he gets away with slapping her in public. Reason? She sings a song, the lyrics of which he considers “indecent”. A similar entitlement mentality is exhibited by the brother of Raju’s love interest, who forcibly forbids her from marrying Raju. Sundaram’s speech impaired father kills himself for his egotistic failure being unable to fight the unfair treatment he suffers at the hands of his employer. The prostitute Saleema faces social ostracization and antipathy for her choice of profession. Raju is accused of covert homosexuality and possible pedophilia: arising from the fact that he is a 49-year-old bachelor. The teenager Joseph loses his upper-caste Brahmin sweetheart Bhargavi on account of him being a Christian. Bhargavi’s father emotionally blackmails her by threatening to kill himself, were she to marry Joseph.

Societal antagonism, sexism, and casteism play the villain by causing three out of the four couples to fall apart. The only couple that does survive against all odds, ironically, is one that’s helped by the very society that breaks up the other three. Raju marries his lady love: his madam, with the help of his loyal friends and succeeds in his love. And thus it makes the viewer take home a strangely packaged sense of redemption, despite all. Reminds me of the Ugaadi chutney Andhra is famous for: a mix of sweet, sour, and bitter flavors. This movie, too, is no different.

The twist in C/o Kancharapalem, which takes us back to the cryptic message in the title song, lies in the grand revelation that the three failed couples were all nothing but phases of Raju’s very own love life. Lined up linearly, all adding up to the person that he finally became. The crestfallen little boy, the jilted teenager, and the aggrieved man: it was Raju all along. It is all just one man’s journey of love and loss, where he takes on different names and different lovers at different times in his life, just as the soul takes on different lifeforms, as portended by the title song. Such a thoughtful theme by itself, that too in Telugu cinema (usually high on formula-based scripts), gives us a reason to believe there’s something to look forward to from newbie directors like Maha.

C/o Kancharapalem is streaming on Netflix

All Jane Campion Movies Ranked from Worst to Best