Netflix’s new fantasy flick Slumberland (2022) follows quite the adventure that Nemo (Marlow Barkley) and Flip (Jason Momoa) embark upon in the cinematic universe’s dreamverse. In a similar fashion to Inception, the two come alive to a magical reality in their dreams and pursue a mission to reveal certain truths about their lives. The elusiveness of the mission, though, takes a backseat as the real story at Slumberland’s ore unfurls. While it might as well be more of a miss than a hit, Slumberland entertains in its runtime. The watchability flows from the performances of both Barkley and Momoa. Their chemistry takes centerstage and the former truly gives a breakout performance.

This article below is an effort to iron out any pressing questions you might have about the plot after watching Slumberland. We also discuss in minute detail the ending of Slumberland and what it means on an emotional level. Let’s dive into the world of dreams, where nothing is impossible!

What mission do Nemo and Flip embark on? 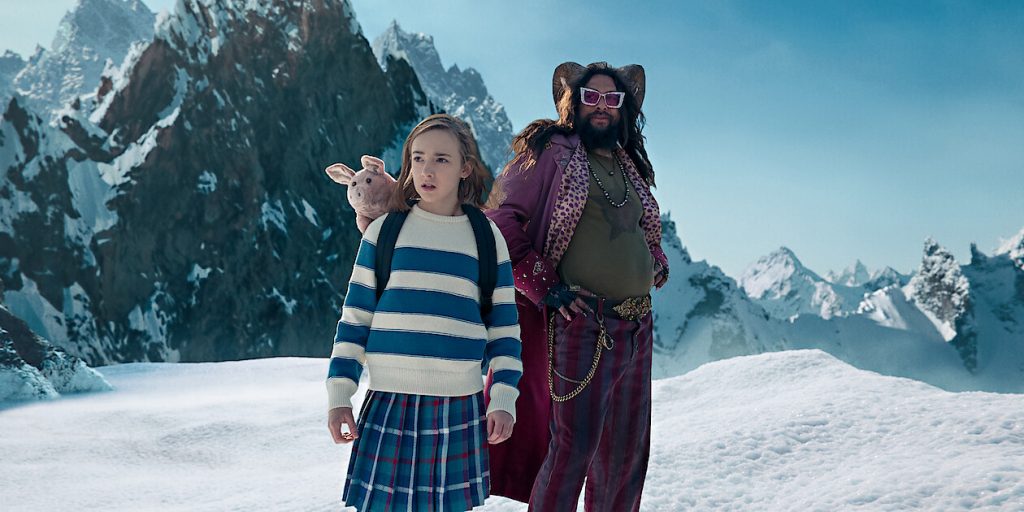 We see at the start of the movie that Nemo’s father, Peter, went to attend a night call after putting Nemo to bed. When she wakes up after a terrible nightmare where the monster he described in the Sea of Nightmares ate him, she finds it to be true. Well, the part about Peter not coming back to her. She is informed that her uncle Phillip will be taking her in. He lives in the city. During her first night in the new house, Nemo discovers that she can move while dreaming. Her stuffed Pig comes alive and somehow, on her bed, she reaches the port where she sails back to the light tower.

Although she is happy to be back in her old house, she finds a strange man rummaging through the things there. Post the initial introductions, it is revealed that he is in fact the “Flip” Peter always mentioned as his adventure mate in the stories. He tells Nemo that if she wants to see her dad again, she needs to give him a map. Nemo finds the map in a carton box and delivers it to Flip. That is where the real mission is revealed. They must travel to the Sea of Nightmares through Slumberland and find exotic pearls that can make any wish of the holder come true.

Nemo’s only wish at the time was to see her father again and that is the mission: find the pearls so that Nemo could fulfill her wish of seeing Peter again. Flip also had a wish of his own that we will be discussing in more detail later on in the “ending explained” segment.

Slumberland is the collective dreamscape where everyone’s dreams – however weird they may be – exist. It is the place that makes this “coming alive in the dreams” happens. This place is like a jar where one keeps all the m&m’s, where the candies are dreams. It is the name given to the universe of dreams and also houses the Sea of Nightmares which has a huge bearing on how things turn out. This realm is similar to sleepwalking in many ways, except that it has been given a distinct existence altogether. It has its own moral code and is a metaphor for individuals part of it confronting the emotions that they face in real life. In the scheme of the Netflix film, they are the fear of being alone, drowning, and running away from one’s real identity.

Why does the BOSA want to arrest Flip and prevent him from going into Slumberland?

BOSA stands for the Bureau of Subconscious Activity, basically the police of Slumberland. It is responsible for making sure that all the people who enter the realm of Slumberland do not breach the boundaries and contours of their dreams and walk beyond it into the Sea of Nightmares. Cross-walking into other people’s dreams is also what the police look out for. Agent Green (played by Weruche Opia) is the agent who has been pursuing Flip for almost two centuries because he keeps breaking these rules. An interesting analogy that surfaces in modern pop culture is that of the Thought Police from the Orwellian universe of 1984.

That authority too was determined to clamp down on free speech and control the minds and thoughts of the Stet’s pupils. The BOSA does something similar. They are the ones who want to establish control of what people dream of. Flip and several others dared to cross their instructions and rebelled freely in Sulmberaland. That is why they want to prevent him from going in, and especially keep him off the Sea of Nightmares that houses the precious pearls that grant wishes.

What is the Nightmare and why does it disappear after Nemo wakes up Flip?

One of the most interesting aspects of how the monster looks to Nemo is the story Peter told her before dying. In one of his peculiar adventures with Flip, he described the sea monster who almost got them. Nemo uses that description (as one of the last things said by Peter) as a psychological trigger to make it into a terrible nightmare. She associates the memory and feeling of being left alone after her father dies. Flip says the nightmare attaches itself to people who reek of fear. Nemo feels that fear in the absence of her father; the only person she has been close with her entire life.

His leaving has left a void or vacuum in her life where she feels unsafe. Agent Green explains to Nemo that the creature will follow her until the moment when she lets go of whatever is making her suffer. Flip rescues her, and they discover the last place on the map, a representation of the lighthouse in the dreaming world. Nemo grabs the pearls, but the nightmare attacks, Flip jumps to the rescue, but the nightmare is too strong. Having only one pearl, Nemo wishes for Flip to wake up, and he disappears from the dream world.

That very act of Nemo – using the pearl to wake up Flip, despite knowing it will vanish him from Slumerlabd – is a coming-of-age moment for her. It shows that she is no longer plagued by the fear of being alone. In the absence of fear, the smoke monster also disappears. It has nothing to feed on anymore and hence cannot exist in the dream world anymore.

What is the real identity of Flip?

The ending of Slumberland has quite a twisty touch to it. The move certainly produces a “WFT” moment for you as a viewer. When Phillip (Chris O’Dowd) shows Nemo some of the old videos shot in their childhood, she gasps in astonishment. Gradually, she learns that Phillip is indeed Flip in the real world. It is his uncle she sees in the dream world. He is a successful doorknob salesman and felt really grief-stricken after Peter moved to the island to start a family. He had no idea that Nemo was her actual niece because he had no memory of who he was in the real world.

The boring man we see with Nemo in the real world is dull as he has no energy that the real Flip had. In fact, even the name “Flip” came from Phillip and was a nickname that Peter gave him. The details of how he was stuck in the dream world are a little blurry. There are no definitive explanations of how that happens. But the end product was that Flip drifted farther and farther away from the real world where he felt sorrow and pain. He was only alive in Peter’s and Nemo’s life through the constant storytelling by the former.

His memory of his little brother kept him alive all these years. Phillip and Peter became estranged after Peter had kids, but as Nemo points out to him: “My dad didn’t move on, he told stories about you every night.” After Nemo discovers the truth of who Flip really is, she heads back into Slumberland to rescue Flip from the Bureau of Subconscious Activities. It is revealed that Flip’s dream is to wake up. If you spend too much time in the dream world, you forget who you are in the waking world.

It also explains why Phillip was so dull. It was because he had stopped dreaming and that is a central theme of Slumberland. Since it is aimed at kids, they are allowed to have this illusion that they can have dreams that will not be shattered by an indifferent and cruel world when they grow up into adulthood. If you stop dreaming, there is no life left in you. The movie expresses that message through Momoa’s Flip when he realizes who he really is.

But when Flip learns the truth about himself he refuses to use the pearl. He does not want to wake up to being that unhappy person with no friends and enthusiasm. However big a criminal he may be in Slumberland, Flip’s personality is the fun-loving kind that keeps things interesting. Without such people, the world would be a rather dull place. Imagine if the only story you have to tell a kid at night is one about doorknobs. Nemo, though, was determined to make amends and rescue her sweet uncle who was lost. It also reminds me of that movie released on Disney, Soul, which used a similar concept to showcase “lost souls”.

Nemo uses the pearl she picks up when she reaches the Sea of Nightmares to bring back Flip and he disappeared after that. The monster too goes away from her but her wish to see Peter again is gone as well. But somehow, the stuffed Pig saves the day. He managed to eat another pearl though and she uses it to see her father at the lighthouse. In the real world, Nemo has also returned to the lighthouse in the middle of the storm, but she has almost drowned in the ocean. The coastal guard and her uncle are there to rescue her. In the dream world, Nemo picks up one more pearl and sees her dad again. They spend time together, but she realizes she must wake up because life goes on. That is another big lesson from the film.

When she wakes up, she discovers that Flip is back with Philip and that his entire demeanor has changed. The movie ends with both Nemo and Philip starting new lives in the real world. They still use Slumberland’s escape mechanism, as we see next in the final scenes, showing that the two have found a profound sense of calmness and happiness in their lives.