Home»Reviews»Films This Week»Son of Monarchs [2021] Review: A Mysterious yet Powerful Blend of Science and Cinema
Films This Week/Reviews

An obvious danger of scientific exposition and overt explanation invades the mind when a scientist makes a film. Chances are that the film would eventually succumb to heavy emotional beats. However, Alexis Gambis dodges this convention quite early with his sophomore film Son of Monarchs (2021). He constructs such an intimate familiar charm amid scenes of chaos that you’re ultimately invested.

The film starts with two children, Simón and Méndel, gazing at a large kaleidoscope of butterflies. The little Méndel says that it looks like a red-color tree. However, the sadistic Simón declares that it looks like a group of people who have hanged themselves. Eventually, it is revealed that they’re two brothers who have lost their parents in a drowning accident. We then find that the kids live with their grandmother. Fast forward to the present day, Méndel is a successful scientist in an American research lab studying monarch butterflies. Further, his relationship with his brother has been considerably strained. The rest of the plot progresses with the life of Méndel in America and how he grapples with the distinct mysteries of his field of study. Apart from this, flashbacks to the rural past are a constant presence.

The narrative in itself is fairly familiar. Méndel (who is named after the famous Czech biologist Gregor Méndel) is a transparent protagonist. Basically, we can look through what frustrates him and what attracts him. His sadness comes from an extremely personal injury from the past. However, what distinguishes him from the other ‘heroes’ of his kind is that he’s very real, and too human to dismiss as uninteresting. He isn’t one of those bleak characters steeped in tragedy. He looks at his job with utmost fascination, and is exceptional at it. We also get to see how affectionate he is towards his village family and particularly his loving relationship with his niece. Gambis also gives Méndel a romantic arc but breaks free from the emotional quotient cliché associated with such subplots. 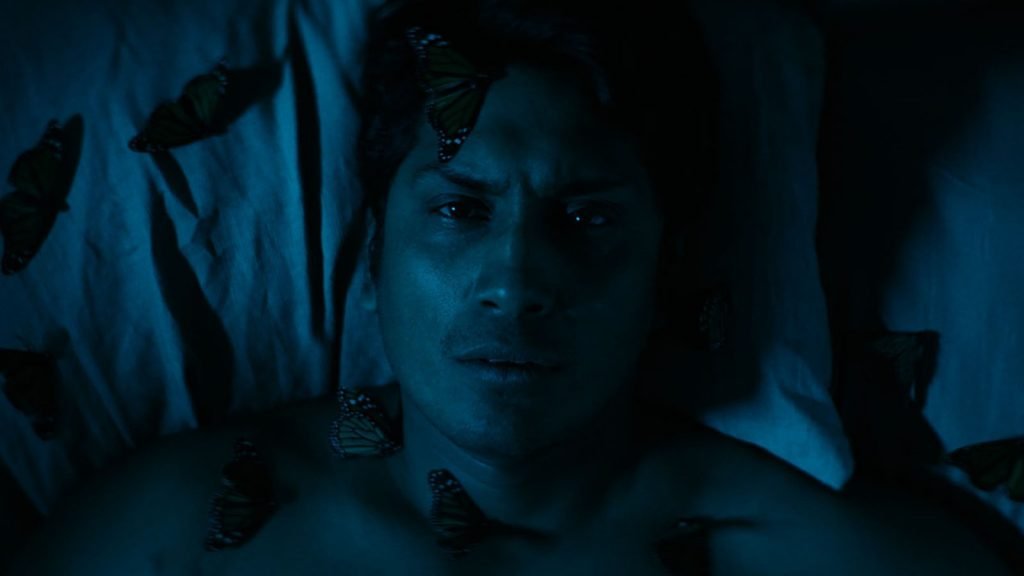 The kaleidoscopic images of colorful butterflies lends the film a spellbinding visual language. Keeping the monarch butterflies aside, there is wonderful mosaic of the Mexican rural flora and fauna. Natural light is a compelling differentiation between the Mexican village and the NYC. The butterflies are a constant motif in the film, and it’s the terrific cinematography by Alejandro Mejía that ensures the shots are anything but frustrating. The editing work is excellent in the first thirty minutes. The writing however, is the most powerful weapon of the film- it alternates between subtle realism and mainstream drama. However, it serves powerful allegories about the Mexicans crossing the border, the coping mechanism formed by death and how your roots gradually shape your own future. There’s a mystical satire on the Trumpian America here, which deserves nothing short of an applause.

I, personally, was hooked towards the film’s slow-burn thriller aesthetics. The meandering nature of the film seems to replicate our protagonist Méndel and his eventful journey. We see him slowly escalating into the colorful yet complex world of butterflies. There are aquatic allegories serving as both nightmares and some sort of an existential dread. But at the same time, Alexis judiciously uses the screenplay to extract real, humanistic touches which are extremely tender at times. There are some horrifically shot occult sequences but they’re a great touch in merging technology with tradition.

However, the single-most winning aspect of ‘Son of Monarchs’ is its rather nuanced portrait of a scientist, his workplace, and his life. There are no big overcoats, no whitewashed walls and certainly no big jars of chemicals. Instead, we have a casually atmospheric workplace with workers moving around in casuals, working on their files and cooperating. We have interesting PowerPoint presentations which, for one, don’t serve as an indication that someone somewhere is getting bored. It doesn’t oversimplify science with exposition. On the other hand, we have charming in-house jokes which manage to land in a lived-in way, breaking the stereotypes of a serious environment. It also oversees the work microscopically, yet from a distance. Méndel’s way of processing his work and learning from his own research papers is brilliantly shown. Additionally, there are precisely athletic scenes where humanity is compared with the flight of these monarch butterflies.

The acting performances are so fantastic that they don’t feel like enactments. This holds true for both the Mexican and American actors. While there are no clear standouts, Tenoch Huerta is easily the most excellent performer here. The incredible actor, who starred in the Blumhouse feature Madrés that released last week, is in supremely effective form. His performance is restrained in places and incredibly unfettered in others. He paints a rather melancholic portrait of Méndel, sometimes being full of youthful life and at times devoid of it. He’s so good, you cannot imagine anyone other than him in this character. He truly gets the structure of his character and you should watch the film just to experience this pleasing presence.

However, ‘Son of Monarchs’ does have some considerable flaws. After a brilliant first hour, the last thirty minutes are too dragged and stretched. At the climax point, it felt as if the first half and the last thirty minutes are two entirely different films altogether. The subplot of the strain between Simón and Méndel is well-observed but it is ruined by the awkward reveal in the end. The mediocrity becomes nearly saddening, albeit a few genuinely admirable moments do save it from becoming a total mess.

The flawed last stretch doesn’t take away from the interest and fascination I constantly felt while watching the film. Son of Monarchs is a lovely little Mexican gem that confirms Alexis Gambis as a very competent filmmaker apart from being adept at his science. It also promises a genuinely charming leading star in Tenoch Huerta, flashes of whose arresting talent was seen in Alonso Ruizpalacios’ film Güeros. An extremely well-crafted blend of science and humanism, the film doesn’t compromise on its art either.

Son of Monarchs will be available on HBO Max from 2nd November.

Everything we know about 'Squid Game' Season 2