Nature hath no fury like a mother forcefully separated from her child. It is this phenomenon that Joshua Gil attempts to explore in ‘Sanctorum’ which premiered at the 34th Venice International Film Critics’ Week. With its magnificent first shot of the gorgeous sky followed by a haunting voice over, the story that unravels is fairly simple and realistic but the solution that follows lends the movie the layers of Gil’s vision. Set among the people of indigenous communities living in the rural villages of Mexico – the one’s who are constantly torn between the tortures of the cartels and the military and suffering from absolute negligence when the government’s involvement in the marijuana farming which they are forced to cultivate for basic survival is concerned. The story that unfolds is more grounded around the mystery surrounding the consequences of the injustices that shroud their daily lives.

Apart from the simple story-line that would have otherwise made this film a stunning but conventional take on the harsh reality of such communities, Gil’s credit lies in his portrayal of the mysticism – his successful blend of the pagan and the biblical. On watching the movie one would easily be reminded of the hardships portrayed in the very old movie Riders to the Sea, making us privy to their poverty and grief-stricken lives. Much like Riders to the Sea, there is sufficient foreshadowing that something ominous cloud the sky above this community. Elderly people have heard the sound of a bell (could be interpreted as a death knell) on their trips to the mountain. Every family mourns the loss of somebody who has died in the process of trying to keep their families alive doing the only thing they know – farming. While the presage on life and death is very biblical, the constant return to nature is a brilliant take on their paganism.

Similar to Sanctorum – THE SCARECROWS (LES ÉPOUVANTAILS) [2019]: ‘VENICE’ REVIEW- THE HORRORS OF SURVIVAL

Keeping in mind the connotations of nature, forests, fires, the predicament of farmers, the negligence of the government towards indigenous communities and their easily displace-able status in today’s world scenario, Gil presents a compact montage that knits all of them together. A child’s cry to the forest to return his mother who has disappeared unleashes wrath quite unimaginable but metaphorically very plausible in our current environmental scenario. If one has watched Aronofsky’s “mother!” , one would know the extent to which Mother Nature can go to protect her children and this metaphor quite seamlessly appears to fall in place in Gil’s creation. 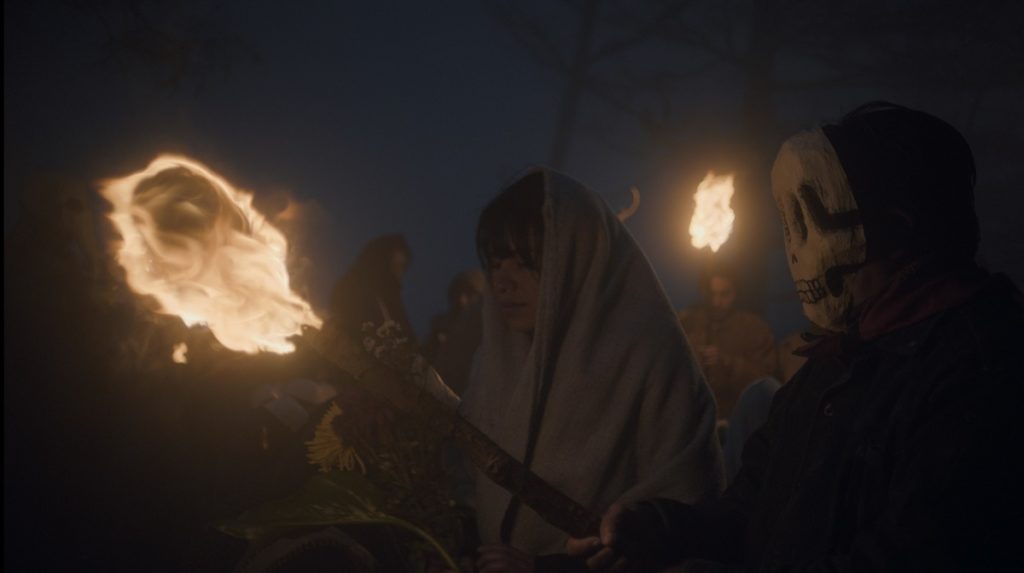 The short dialogues revealing the predicament of the villagers, the revolutionary lessons taught in the class to the young students and the brief messages on the wireless are all indicative of Gil’s definite goal. There is very little beating around the bush with the plot and an even narrower scope for character development because no individual character in this film or scenario is important. Their fates are interchangeable at the hands of their human masters and they all live another day at the cost of their neighbor’ s/relative’s/family’s lives. Nature, in this regard, is given a firmer stand as an entity that develops and finally explodes in a given time.

Gil’s Master’s degree in Cinematography is evident in his attempt at following breathtaking and contemplative color palettes that enhances the mood that engulfs the movie. The stunning sound effects which includes minimum background music, the clear sounding shots of gunfire, the rustling of leaves, the grumbling of the sky accompanied by the seemingly unrehearsed sound of the trumpet and the ominous voice-over, crafted by Sergio Diaz (a person whose credits include Roma and Pan’s Labyrinth) further lends weight to its uncanny quality.

To watch a film related to the narco-violence in Mexico that relies not on its vivid portrayal of human brutality but focuses rather on the mystical control of nature over the lives of these vulnerable people with primitive beliefs is a fresh take in the commercial world of visual media which otherwise glorifies the macabre cartel brutality as producer Carlos Sosa, of Viento del Norte Cine, has mentioned about this film saying that it is but a “call for peace and harmony in our country.” While this film might not appear to be a crowd puller, it is definitely worth one’s time especially for those who are willing to look beyond the stereotypes related to this genre. Although a drama and a fantasy in blanket terms, the film gives a voice to unheard communities through nature (another unheard entity) and pleads action or forewarns a catastrophe.

Made in Bangladesh [2019]: 'TIFF' Review - A Colorful Empowering Film for Women Around the World