Hot take time! Star Trek is better than Star Wars. Star Wars is more popular than Star Trek for a myriad of reasons, with mass appeal and the massive marketing power of Disney being the biggest ones. But on the basis of storytelling, character work, diversity, boldness to explore the weirdness of space, and general quality, yes, Star Trek is better. And this is coming from someone who is an ardent fan of the Kelvin Timeline movies and is just starting to dive into the shows. Here’s another hot take. Q (John de Lancie) is one of the best villains of all time and his rivalry with Picard (Patrick Stewart) is better than most hero-villain relationships, period. Since Star Trek: Picard Season 2 is centered around that, it already has a head start in the race to be one of the best shows of the year.

Directed by Douglas Aarniokoski, Joe Menendez, Lea Thompson, and Michael Weaver, and written by Kirsten Beyer, Michael Chabon, Akiva Goldsman, Alex Kurtzman, Star Trek: Picard Season 2 takes place a few years after the events of Season 1. Jean-Luc Picard is back at his chateau and on good terms with Starfleet after saving the galaxy again. Raffi Musiker (Michelle Hurd) has been reinstated as well. Soji (Isa Briones) is traveling the galaxy as a diplomat of sorts. Elnor (Evan Evagora) is now a Starfleet Academy graduate. Seven of Nine (Jeri Ryan) is captaining the La Sirena for her humanitarian missions. Cristóbal Rios (Santiago Cabrera) and Dr. Agnes Jurati (Alison Pill) are heading a new edition of the USS Stargazer (Picard’s old ship). And they come across a Borg ship asking for Picard. This obviously forces Picard to come aboard the Stargazer and when all hell breaks loose, Q arrives to “rescue” them.

Little disclaimer: this review of Star Trek: Picard Season 2 is based on the three episodes that were made available for the press.

Season 1 of Picard was all about Jean-Luc (lovingly called JL nowadays) dealing with the guilt of losing Data (Brent Spiner) and the destruction of Mars. Through that journey, among many other things, Picard came to the realization that the United Federation of Planets is susceptible to being infiltrated by radicalized groups. And if they aren’t discovered, they can establish their own fascist regime and go about cleansing the galaxy. Time and again, Picard has come face to face with the fact that any organization that’s trusted with too much power, no matter how democratic they want to be, runs the chance of being dictatorial. Picard has fought to prevent that every time. However, in Season 2, Q forces Picard (and his newfound companions) to live a reality where that fear of his actually comes to fruition. If you think that’s worse, well, wait till you find out that in this reality, Picard isn’t known as an inspirational hero but a genocidal maniac. 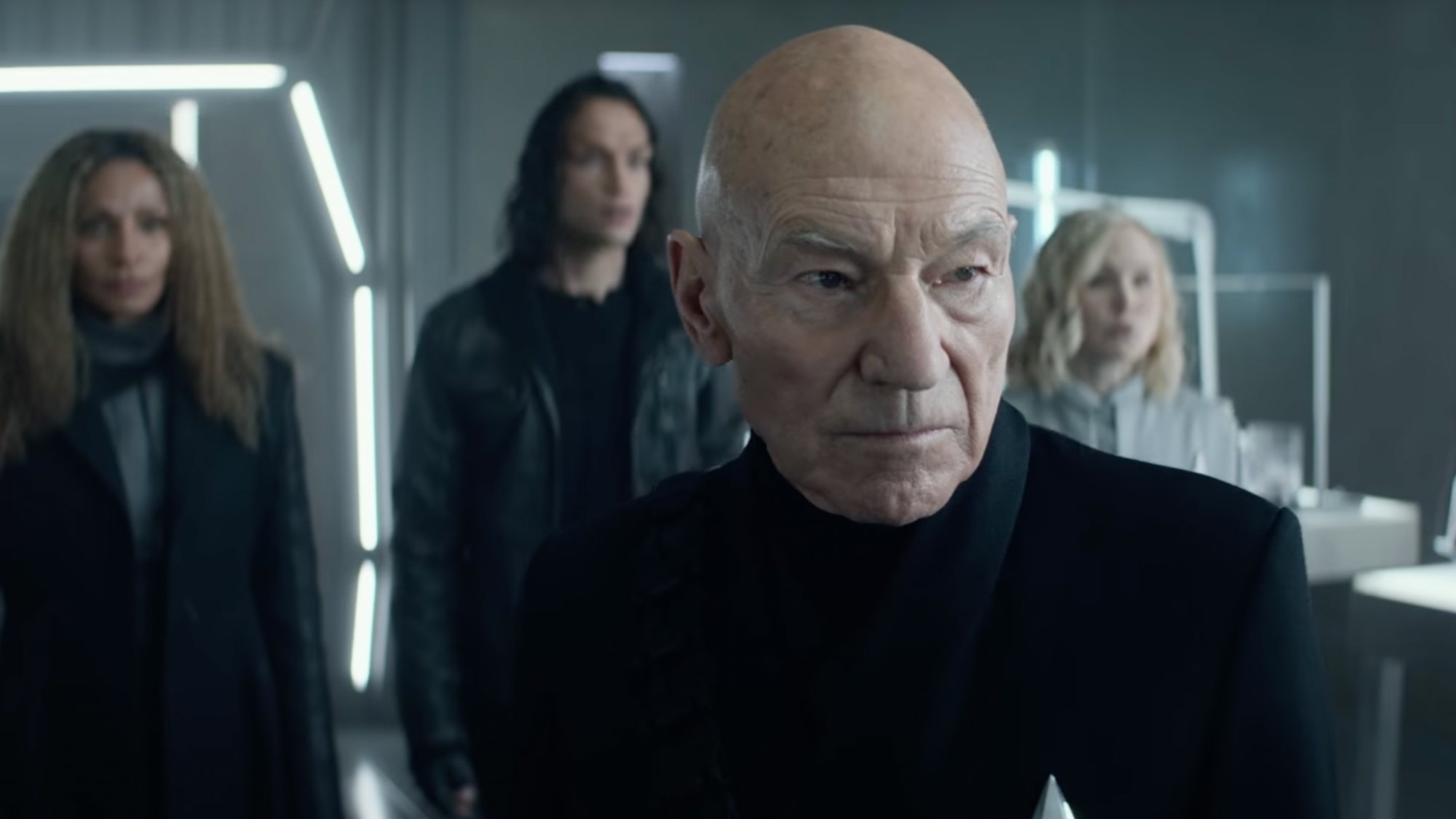 In the past, Picard has been forced to grapple with the mere notion of losing his loved ones. Especially by Q. Here it looks like all those experiences, along with the idea that living selfishly is a crime, has compounded in such a toxic way that he just can’t think about simply falling in love. And now that so much time has passed, he probably thinks that there’s no point in it anyway. All he can do is ensure that the time he has utilized to make the galaxy a safer place isn’t botched in any way. So, for Q to literally botch it in the most spectacular fashion possible is absolutely diabolical. Legacy sequels have a tendency of giving said legacy characters a swan song or a heroic end. But after looking at Logan (2017) and this, it looks like Patrick Stewart has a penchant for agreeing to get his characters tortured to kingdom come. Why? Maybe because overcoming it is cathartic as hell.

Talking about Patrick Stewart, as usual, he’s the linchpin of the show. The way he, along with the writers and directors, manage to discover yet another unseen layer of Picard, while showing the evolution of the character is satisfying to watch. There’s a touch of vulnerability to him, which is something you can say is carried over from the previous seasons. But there’s also a sense of doubt to his actions, his expressions, and his decisions as he feels that there’s a chance that he’s not going to reverse Q’s spell (?) this time. Because of that, not just him, but also Seven, Rios, Raffi, Elnor, and Agnes have to live with the weight of being the worst people in the known universe. This confusion bleeds into Hurd, Pill, Cabrera, Evagora, Ryan’s performances as well, with Pill being a highlight. There’s a scene where she goes through a plethora of emotions for a reason that can’t be revealed, as if she’s switching channels on the TV, and it’s mind-blowing. And it’s obviously great to see the familiar faces of Whoopi Goldberg as Guinan and John de Lancie as Q.

Side-note: Lancie’s performance as Q and the character of Q itself aren’t referred to a lot while talking about villains oscillating between extreme villainy and mild heroism. Also, Q’s relationship with Picard doesn’t come up a lot while discussing teetering-on-homosexual hero-villain duos. And we as a society need to correct that. 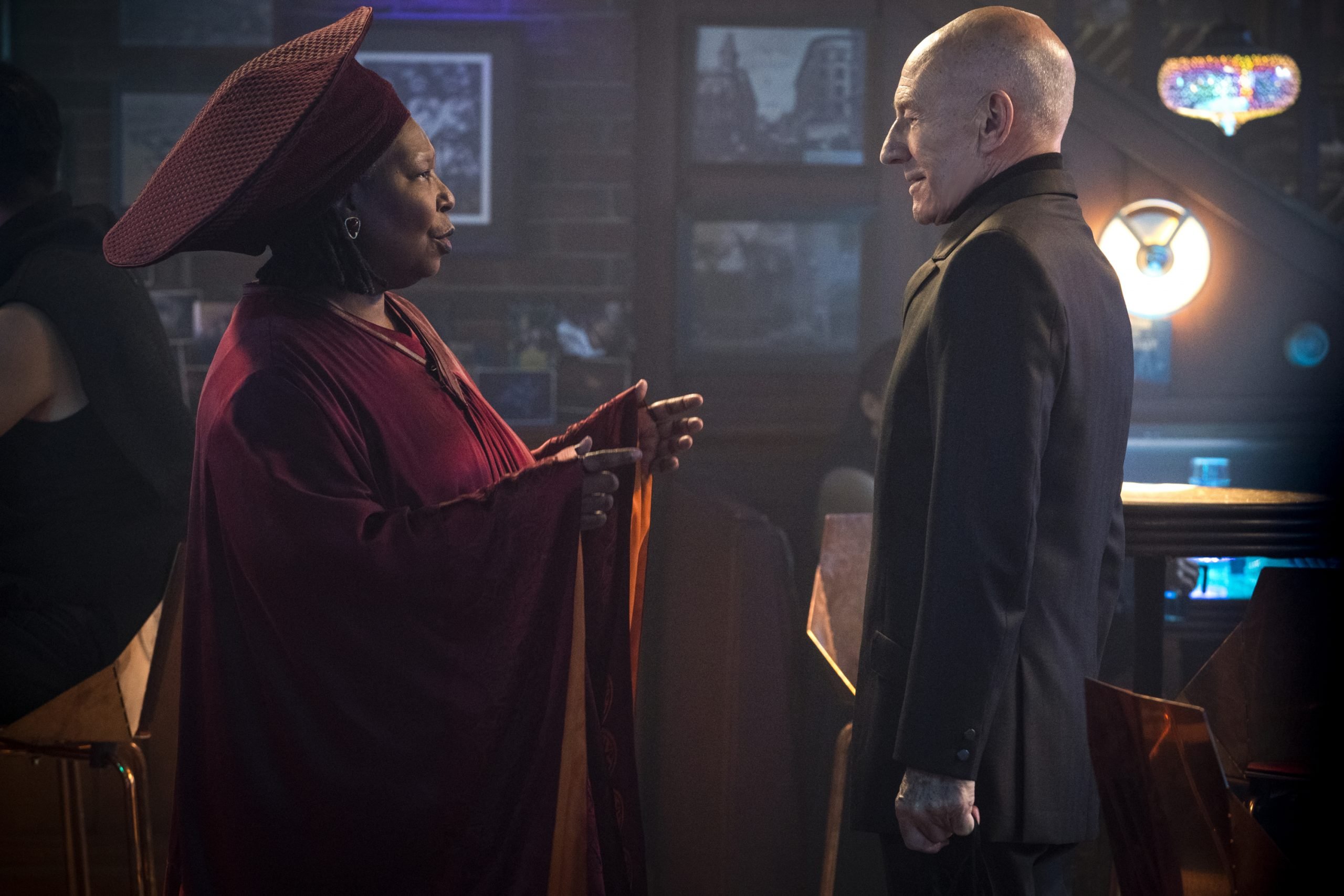 Coming back to Picard Season 2, this outing corrects a lot of the problems that Season 1 had. The biggest one being the visual storytelling. For the uninitiated, it’s a problem that’s synonymous with what we can call the J.J. Abrams-Alex Kurtzman school of filmmaking. It involves a lot of walking and talking, Dutch angles, and over-editing to make scenes feel “exciting”. It doesn’t matter if it’s a calm conversation between two characters. The scene needs multiple moving cameras (moving being the operative word here) and then the editor must cut between them without any thematic or logical purpose. That’s almost gone in Season 2. Frames are much more static even when chaotic, action-packed moments are unfolding. The lens flares (another J.J. Abrams filmmaking trope) are aesthetically pleasing. The CGI is perfect, as always. The score isn’t overwhelming (like last time). To put it simply, where Picard Season 1 was pretending to be mature, Season 2 is actually mature. However, not in a self-serious way. In the fun, fruity way that Star Trek is famous for.

At the time of writing this review, it’s public knowledge that Picard was always meant to be a three-season run with the door being kept open for future adventures. While it would’ve been cool to go back to the old ways and treat each episode (or two episodes) as one self-contained story, it’s good to see that they’re doing the same with each season. There’s no unnecessary “sequel bait” or attempts at building characters to give them their own spin-offs. The show is about Picard. It’s his story. Everything around him exists to compliment him. Season 2 is, in my very biased opinion, a brilliant addition to what looks to be Patrick Stewart’s final run as the iconic character. As a fan, it’s great to spend more time with him and his friends. All the exploration about time, love, mortality, politics and more are bonus material at this point. So, if you are a Trekkie, please watch Picard. If you aren’t, then start watching the shows and movies and then watch Picard.

The first episode of Picard Season 2 premieres on Prime Video on March 4 with the subsequent episodes releasing every Friday.

Undekhi (Season 2) 'SonyLIV' Review: More of the Same but Blander, Duller, and Clumsier