The disabled middle-aged man awakens in his wheelchair in the opening scene of “Still Human (Lun lok yan)” – The first feature film from director Oliver Siu Kuen Chan. His name is Cheong-Wing (Anthony Wong) and he lives in a small, messy apartment in a social district. His family is nowhere to be seen, except on a few pictures hanging around the old desk. His mood, best described as grumpy follows him as he leaves the apartment complex and drives around the streets of Hong Kong, going to pick up his new Filipino carer Evelyn (Crisel Consunji). An innocent looking girl who doesn’t speak a word of Cantonese. Her cleaning and nurturing skills are far away from good and it all looks like their working arrangement will not last long.

“Still Human” focuses on everyday lives of Cheong-Wing, from the chest down paralyzed man, and domestic caretaker Evelyn as they get accustomed to one another. As necessity creates an opportunity for the duo to live together and tolerate each other, we get a chance to discover what drew them together in the first place. We also get to know why is important for both of them that this arrangement works out.

Evelyn’s story, at first might look overly simplified, straight forward and naïve. Something on the lines of – A maid from a “developing country”, comes to a well-regulated society to work for some miserably low paycheck that she is probably going to send back home to her family. But, as the film proceeds, there is a lot of small and deep bits and pieces that make her story emotionally closer to a viewer. Evelyn has dreams and hopes for her future. She didn’t come to Hong Kong just so she could provide her family, she is there because she has dreams about becoming a photographer. She also has hopes for a better future for herself, and her way to get closer to that is by collecting enough money so she can get divorced. 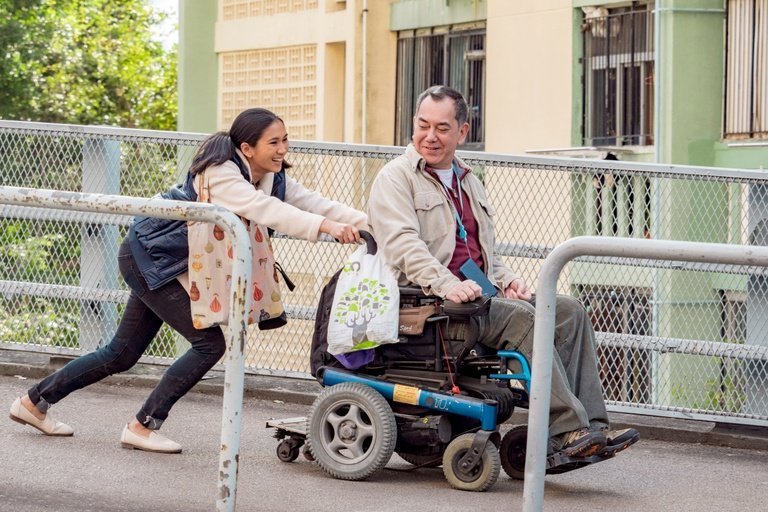 Cheong-Wing’s story, on the other hand, deals with his acceptance to a condition he is currently in, as he has destroyed all his family relationships since he ended up in a wheelchair. With his old-fashioned attitude, that he needs to provide to his wife, son and also to lecture his sister Jing-Ying he put himself in a position in which, he doesn’t want to feel like a burden to them. By pushing them away, for their own good, he forced himself to surpass any positive emotions in his repetitive, simple life.

“Still Human” might at first glance seem like just another twist on “The Intouchables” or “Rain man” formula, and to be honest it is not far away from the truth. But the young director Oliver Siu Kuen Chan doesn’t try to escape that feeling in her film. She actually does the opposite. She embraces it, believing how relevant the story she is trying to tell is. Which doesn’t just work on a temporary basis. It actually makes this film heartwarming and truly enjoyable.

From the first small troubles that Evelyn and Cheong-Wing get it is obvious how everything will end up good by the end. But the journey of discovering the faiths and feelings of the duo is what makes it worth watching. Even the most cringe-worthy “vanilla life drama film” cliché scenes, as the old man driving around his maid on a wheelchair, feel right and perfectly placed in a film.

Of course, a lot of these moments rely solely on the fantastic acting. It is hard to imagine film legend like Anthony Wong giving a bad performance. But to be honest, it is actually breathtaking to see him in a slow and emotionally deep role after all the action movies he made in his career. His colleague Crisel Consunji might have been unknown before this role, but with her performance, she easily follows Wong’s acting, and even for some moments, she delivers even better stunning specter of emotions.

Overall, “Still Human” is a light story about society and what it means to be a decent, humble and caring individual. With the familiar but captivating story, and natural high class acting of Anthony Wong and Crisel Consunji, it is a film worth the 115 minutes exploration.