The Finnish Entry for Oscars – ‘Stupid Young Heart’ is largely raw and a passionate film. With its two adolescent protagonists, it sets its narrative in a contemporary context. The setting in Finland offers these two minds from an impressionable age, a dose of bitter reality. The film primarily focuses on their sudden adulting stage which has almost become the necessity for them. What else would a young couple with a child of their own try to do? There’s no other option for them but to grow out of their own comforts. The film finds a surprising narrative balance in their chaos.

Kiira (Rosa Honkonen) and Lenni (Jere Ristseppä) are still students of a fairly young age. Their attraction for each other stems from just as basic needs of anyone from their age would have. Both of them just want a piece of the experience of being or rather acting like adults. Their casual moments of romance showcase the same, yet without a hint of understanding of any kind of responsibility. That’s where the trouble begins. Being sexual is all fun until they need to act upon the consequences. Raising a child isn’t a joke and neither is living in the fractured surroundings they need to. Both these aspects affect their psyche, their daily routines and the eventual decisions they take.

‘Stupid Young Heart’ is aware of their ages and the milieu that they are part of. When Lenni confuses responsibility with merely making money to support the child, his intentions are certainly not ingenuine yet the inexperience of the world takes a toll on him. So the impressionable mind of his, as aforementioned, sways on the sides without rational thinking. While the Nazis of their world are using this young adult for their own agendas, Kiira’s struggle is to fit in, in a different context. Her pregnancy gets in the way of being a part of her peers. At her age, she just wants to find a balance of not losing this innocence while still being mature enough to eventually raise a child. 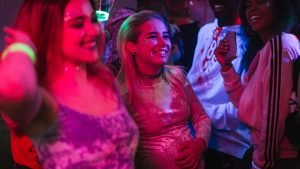 No matter to what lengths the film addresses its issues, what the film succeeds in is putting their reality in almost a naked way. There are genuine moments of him being shit-scared after spewing hatred with the racial slurs. On the other hand, she struggles to come up with any kind of emotion, while looking at him after all the ordeal he takes her through. This authenticity in narration is what drives a largely energetic approach with enough dose of melancholy.

Also Read: ATLANTICS [2019] NETFLIX REVIEW: A GLIMPSE INTO THE OTHER REALM

Rosa and Jere’s performances make this drivel thoroughly engaging to make us empathize with these ‘messy’ people. Her bubbly cheeriness fits just right in her chemistry with her mostly silent partner, who rather prefers to convey more through his eyes. The amount of warmth that the film has for either of them, amidst all their stupidities, is something that takes it to another level. Selma Vilhunen’s direction is surely commendable for the same.

As a result, ‘Stupid Young Heart’ doesn’t want Kiira and Lenni to be just the results of their surroundings. It wants to see them get better through it. It believes in them as individuals and the very intention pays off with how this gut-wrenching experience never loses empathy for them.

Train of Shadows [1997] Review: A Rich tribute to the Visual capacity of Cinema