Home»Reviews»Films This Week»Teen aur Aadha Netflix [2019] Review: Souls looking for a Way Beyond The walls
Films This Week/Reviews

“But here we are, trapped in this city and this heat”
“All of us are trapped”
“Don’t say by life. It’s too clichéd”

No matter how corny it may seem to others for a couple in their 70s, this sounds like a pretty natural conversation. Just like the film – Where even if the central idea of a house being one of the characters may sound gimmicky, it is rooted in darker truths and the clichés that are a part of our life. The approach, which is refreshing, paves the way to a rather simple idea – People trapped into these walls and the resulting relationship between.

As the name suggests, Teen Aur Aadha (Three and a Half) does have significance in the narrative. It presents three tales that happen in the same place over a period of time. All of these tales are shot in 3 long 40 minute takes. The film, directed by Dar Gai, helps in bringing forward the yearning through different stages of human life; experienced amidst the same walls where the house is evident of all that happens inside and around it. The approach creates a certain amount of intimacy to make us feel that we are a part of it.

‘Yamraj’ revolves mostly around the two generations on the two sides of a spectrum of life. Raj (Arya Dave), a 12-year-old boy happens to have born on that day. It is coincidently 29th of February, a leap year which adds another layer to the narrative. His parents, who are absent at the time, made him stay with his grandparents. Language and the regional flair were inevitable with the grandfather being a Parsi man and grandmother, a Marathi woman. But it felt fluid and never forced. Raj, whose school was just on the other side of their chawl/building, returns home for a reason which seems to be rooted in the boredom from that life. There he stumbles upon his grandfather (Anjum Rajabali) who he has to share the room with. An old deceased person like him wants nothing but a moment to spend with this grandchild. What starts between them as a caring talk, extends to the unexplored regions of his mind and a young, naive child’s outlook towards it. It also reflects on the absent parents as well as the regrets that he has over his life. Both of them wanted an escape, whether from the monotonous life or the cycle of life and death.

‘Natraj’ starts with a protagonist with the same name. Natraj (Jim Sarbh), who is shown, walking towards a brothel with colorful balloons, clearly looks like a misfit in that milieu. The discomfort while looking for a way, or will to go in, was clearly visible. There he meets Sulekha (Zoya Hussain) who appears to be oblivious to the world around her. They meet in the same room (from the last story) and were clearly hesitant to even start a conversation. They share their insecurities through silences more than actions. Natraj was American-born 20-something, who started coming to the brothel to gain confidence, as someone suggested him to. Sulekha on the other hand, was there as there was no other option for her to survive. The characters that belong to polar-opposite worlds were lying under the same roof longing for each other’s warmth while trying not to make the other uncomfortable. Their conversation takes many turns often revealing their innermost fears. Yet it hardly makes us ready for the final reveal, which precisely makes it much more satisfying.

‘Kamraj’, the third segment, revolves around a couple in their seventies and portrays love in the late stages of life. Their relationship has lasted for over 30 years and yet they don’t know every little thing about one another. Suhasini Mulay, who plays wife in this story, is shown dancing in the room, assuming there’s no one around. The husband (M. K. Raina) has no idea that she liked dancing; neither did he know of her habit of smoking cigarettes throughout their married life. He falls in love with her grace all over again. They start talking and reflect on the lives they lead with each other. The elderly romance is shown to be longing for the thrill that was missing in this attempt of reviving their youth. It seems all the more adorable with the engaging conversations and equally engaging performances.

Later the film goes on to conclude with the half act. We see the half-god (Yakshraj) on the site under construction or a probable redevelopment. The scene soars high with the haunting tunes that effortlessly fuse with the uplifting drums further. We are officially taken out of their world and thus, are free to escape. 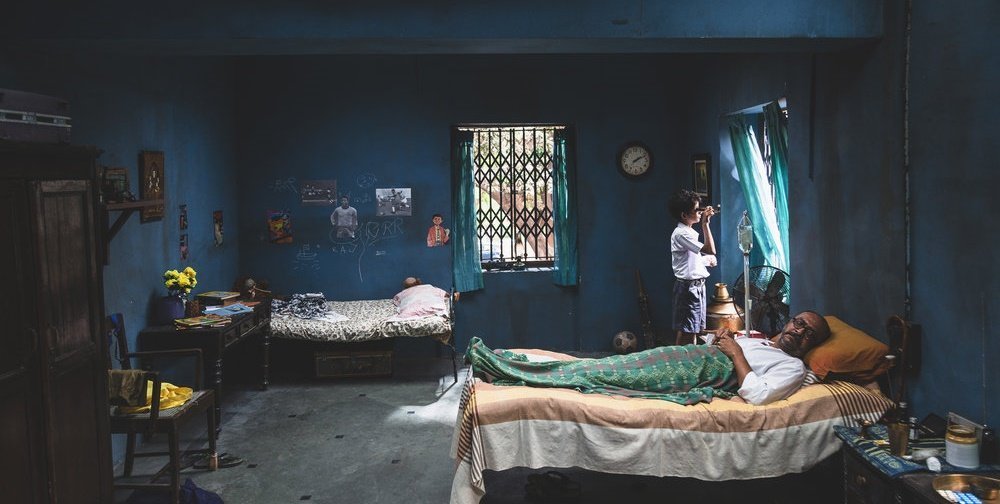 On the conceptual front, Teen Aur Aadha looks thoroughly impressive. It goes in unexplored regions yet makes for a profound and meditative journey. All of the characters seem to be longing for something beyond the materialistic goals. But, what seems lacking in the film was a seamless continuity in the tonal shifts. The camera, which works well, for the most part, leaves the narrative jarring at times. It seems less focused to hold it all together. For an idea which expands over a long time, it needs to sustain a dramatic tension and not just the thematic one. The idea which looks interesting on paper feels lost in translation, at least to a degree. Some of the performances needed more polishing which felt like speaking out the lines that they were given, rather than performing as their characters. For a continuous shot such as this to be thoroughly engaging, acting needs to be meticulously thought-out; which is hit-or-miss in this case.

Suhasini Mulay and M K Raina who have more experience on stage were particularly effective by the ease of their presence. Even a simple line was improvised by either actor in a way to make it impactful and engaging without submitting to theatricality. Also, Anjum Rajabali, who steals every second he’s in, looks aware of the past of his character and the burden. Jim Sarbh impresses in the often muted role, which required a persona like his to morph into the world. He has a particular way of speaking that fuses so well with the character.

At last, the film leaves us with much to ponder over despite not reaching to its complete potential. Nevertheless, it definitely deserves a viewing solely for the fresh approach and for the endearing last segment.