Teen Aur Aadha (Three and A Half) is a film that reinvents traditional narrative structures by presenting three tales from the perspective of the walls within which they take place. The way this was achieved was by filming the entire feature using only three long takes, which means that there are only three cuts in the entire film. If that last sentence brings to mind any forbidding thoughts of a ponderous test of patience, rest assured that Teen Aur Aadha is actually surprisingly engaging and fluidly paced. Directed by the Ukranian-born Daria Gaikalova (who goes by her stage name Dar Gai), and produced by industry veteran Anurag Kashyap, the film takes an intimate look into the stories unfolding within a single building, across three different eras.

The house becomes the protagonist in Teen Aur Aadha and thus, in a way, the narrator of the tales. People come and go but the building remains, observing and absorbing both life and death in its omnipresence.

Each of the three segments starts with an eye-level establishing shot of the outer face of the building and then follows the characters inside using carefully choreographed tracking shots that inform us of the basic layout of the house. It is easy to dismiss Teen Aur Aadha’s three-cut structure as merely a gimmick (as is the case with a lot of films experimenting with long takes) but here it is used rather effectively to create intimacy between the audience and the characters, making us feel like we are part of their journeys in real time. Obviously shooting a film like Teen Aur Aadha in just three takes would have meant endless rehearsals with maybe even some spot improvisation and room for error, and a few slip-ups do make their presence felt on occasion but are never too obtrusive to hamper the flow. The tales are presented in a manner that reveals writer-director Dar Gai’s familiarity with life in average Indian households and there’s an almost O.Henry-like quality to the tonal shifts they undergo as they approach conclusion.

In the very first tale, we see a 12-year old boy Raj (Aarya Dave) waking up on his birthday which happens to fall on the leap day 29th of February. Along with having to deal with all the usual worries of attending a primary school, Raj has to share his tiny room with his paralyzed grandfather, whom he lovingly calls Nana (played by an impeccable Anjum Rajabali). His grandpa longs for Raj to keep him company, even as Raj worries about being late for school. Their relationship is built up through some wonderfully scripted conversation that flows organically, despite touching upon a myriad of themes ranging from religion and language to the cycle of life and death. The dialogue between two people separated by a stark difference of age captures the little boy’s innocence and his intimacy with his Grandfather really well.

While the first story is built through conversation, the second one gets the job done by utilizing silence. Set about 20 years later, the building that was once divided into a school and an apartment is now home to a flourishing brothel. A young man named Natraj (Jim Sarbh of Neerja/Padmaavat fame), in his late-20s, is seen emerging from a taxi while holding balloons in his hand. His appearance is in stark contrast to his surroundings, where a few men are seen catcalling and flirting unabashedly with women from the brothel. The camera follows him as he enters the building and innocuously makes his way upstairs, into a room. However, he discovers that the woman Sulekha (Zoya Hussain) isn’t ready at all to begin business. In fact, she claims that she’s a newcomer and has never done this before, but she cannot let the man leave either as she’d have to face severe consequences for turning down a client.

What follows is the forging of a new, albeit temporary, relationship that’s examined through gestures and awkward silences. Guided by Sulekha’s frankness and simplicity, the introverted Natraj slowly lets his guard down as he begins to emotionally open up to this stranger he’s just met – a development that would lead to a disarmingly powerful conclusion soon after that forces the viewers to rethink the entire segment in a different light.

In the final tale, we find an old man of 70 (M.K. Raina) accidentally discovering that his wife (Suhasini Mulay) has the habit of turning up the music loud and dancing by herself every time he leaves the house to play squash. After the initial awkwardness subsides though, this little discovery sparks a renewed sense of intimacy within them as they dance together and reminisce about the old days when they used to be younger and more optimistic. It is the talkiest and most theatrical section of the film with the dialogue sometimes feeling a bit too corny but still manages to capture the affection between an old couple with honest acting performances. Kudos to the screenplay for its refreshing depiction of elderly romance, something that is quite stereotypically portrayed with clichés abound in Indian film and television.

“These walls have seen so much more than we have.
They are but the same.”

One interesting aspect of Teen Aur Aadha is the way each story is titled using the names of Hindu gods. The first one titled ‘Yamraj’ (God of Death) features a conversation about death and its aftermath at its core. The second, titled ‘Natraj’ (God of Dance) can be seen as a meticulously choreographed tango between Sulekha and the eponymous Natraj as they slowly shed their inhibitions, be it literally or figuratively. And the last tale, aptly named after ‘Kamraj’ (God of Love) explores the rekindling of a romantic relationship between an old couple. All of the tales are rooted in longing, with there being instances of one character asking the other to wait a little longer and stay with them, despite the other person desiring to be on their way. Jim Sarbh provides an outstanding performance here as the meek and reserved Natraj, his attention to detail and ability to morph into his character’s skin making sure that our eyes remain firmly glued upon him whenever he enters the frame. The rest of the cast are up to the task as well, knowing full well that one little mistake could mean redoing a 40-minute long take, and debutant Aarya Dave does a rather fine job of complementing the more experienced Anjum Rajabali.

Across all the years and the people residing there, it is the house that stands through it all, effectively becoming the protagonist of Teen Aur Aadha. And it is fascinating to see the same building with its familiar surroundings being transformed characteristically in each section. From cramped rooms and dull blue walls in the first part to garish reds and greens in the second, and comfortable interiors with pale pinks that radiate cosy warmth in the third – Dar Gai’s use of colour accentuates the mood in each tale. Her script is peppered with minor characters who are interesting despite their minimal role – like the guard Akram in ‘Yamraj’, the transgender pimp Nana in ‘Natraj’ or the unseen-yet-often-discussed Kishore in ‘Kamraj’. Little unsolved mysteries lend intrigue and authenticity to this fictional world, like an unrevealed birthday present that Raj’s grandpa leaves in his schoolbag and more.

There’s also a short concluding section after the third tale that shows the house being repaired and redecorated, almost as if it’s being prepared for its funeral and the ‘afterlife’ to soon follow – making way for new occupants of the house and their stories. And Teen Aur Aadha can certainly feel like it’s documenting a house living through the various phases of life – the first section focusing on youth, the second on adulthood and the third on old age. The film finishes its soul-stirring journey with a magnificent shot which leaves the house and rises above, up into the skies, probably an indication of the soul escaping the corpse and making its way to the heavens. 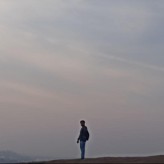 When not watching films or TV series, Shaswata can usually be found either reviewing them or battling writer’s block. His obsession lies with framing and composition in cinema, something he explores by capturing the most memorable moments through screenshots and sharing them on social media.

Village of the Damned [1960] Review: Beware The Stare That Bewitches!