The Flight Attendant Season 2, Episodes 7 & 8 Recap & Ending Explained: Season two of ‘The Flight Attendant’ has thrown up some unexpected surprises. Cassie’s dangerous task to clear her name and find the blonde impersonator ended in some disappointment – both for her and for us. Not only did she lose her sanity in doing so, but also had to go through several moments of life-changing epiphanies that helped her navigate her issues about identity and self-loathing. Much like season one, Cassie’s journey of self-discovery was not a pleasant sight. We were exposed to some chaotic moments and her messy life from a very close and insightful vantage point. But like all of these stories, we want our protagonist to win. And win she did. Read on below to get a detailed recap of all the plot points you might have missed and a review to sum up the season.

Coincidentally, Cassie brings Shane to the shipyard right after the blonde impersonator wipes off the analysts from the CIA. They go to the ship and find a pile of bodies on it. Cassie is also able to spot her missing red glove, planted there as evidence against her. The police investigate further. Megan has contacted the Korean agent to finish the harassment once and for all. She lures him to the boot of the car to give him the evidence but instead, knocks him unconscious and kidnaps him. She drives down to meet Cassie, whom she has requested to arrange a meeting with Shane.

Annie, Cassie, Shane, and Max converge at Cassie’s apartment. They find a pattern in and connection between all the slides and the killings. All the victims knew Will – the mark from Berlin – and all of them were connected with the location of the photographs in the slides. They deduce that Cassie is the killer’s next target and that she must keep herself safe. The last location is identified as Santa Monica’s Pier. Shane, taking charge, decides to visit the place with Cassie to look for the impersonator. Annie and Max naturally follow, but unbeknownst to them, the Diazes also follow them.

Shane goes off searching for the double, asking Cassie to remain seated on the benches. She herself spots the double, wearing the same clothes as her and having a similar hairdo. She is quick to tail her and goes around the Pier to get answers. Dot calls her in the middle of all this and asks her to keep her distance from Benjamin, who, as predicted, tries to make contact. In a state of confusion, she takes the wheel to be out of touch with all the drama. From the top, she sees Shane and Benjamin talking, and mysteriously, Shane falls down, followed by Benjamin. In her mind palace, Cassie was taken by a younger version of her to a room where she meets her mother. They have a strange conversation about Cassie’s unhappiness and the reasons for it. She snaps out of it with teary eyes. Max and Annie successfully neutralize the Diazes and she gets her ring back. The two reconcile and reconnect over their love. 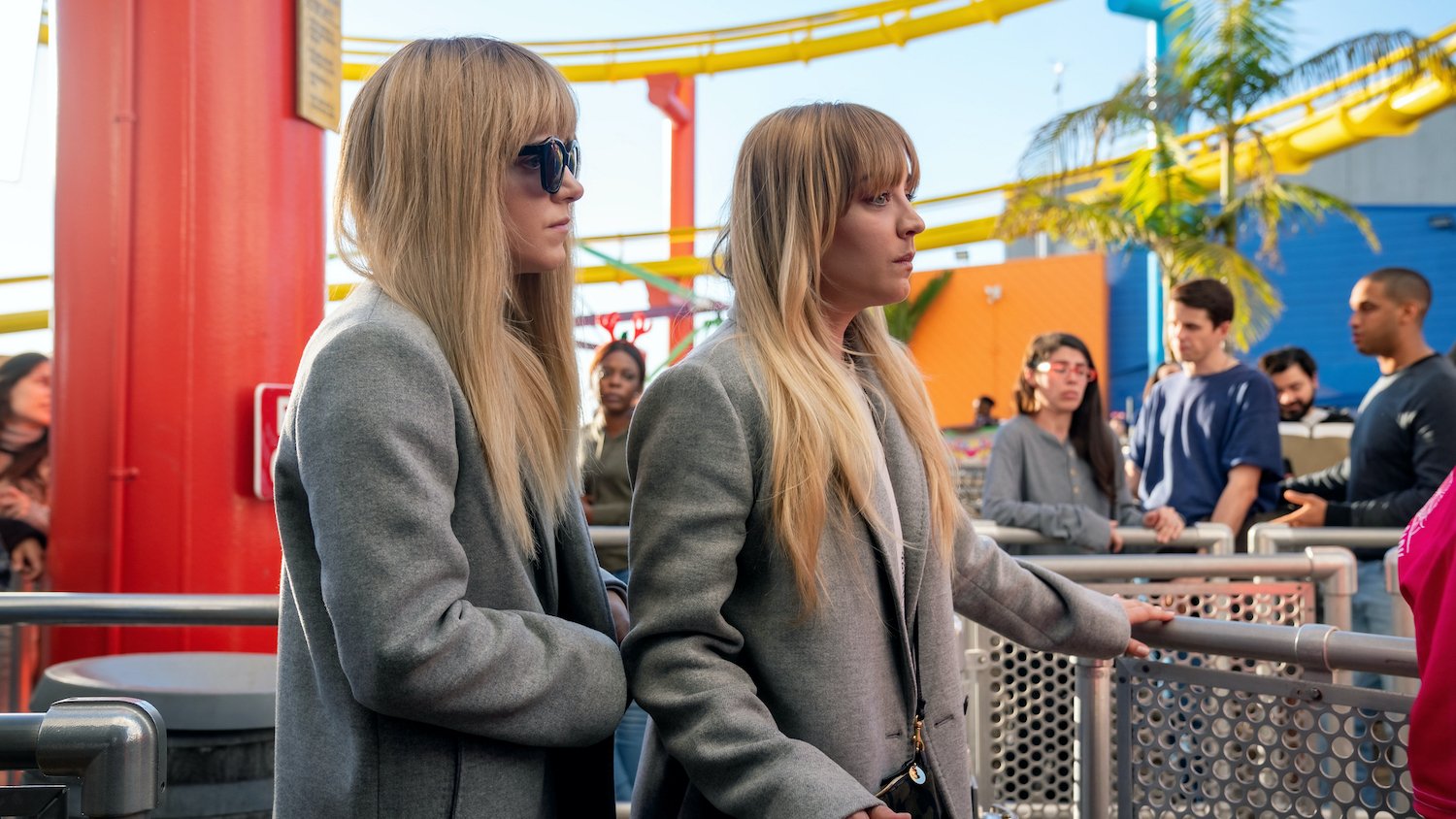 We see the impersonator board the wheel as well and we finally get the answer we have all been waiting for. Grace is the double, as Cassie doubted in the second episode. It did seem too good to be true. Grace’s statements confuse Cassie when she talks about taking orders as she did in the army and that the entire thing is “bigger than her”. Her last task is to kill Cassie but instead, she decides to kill herself.

At the hospital, we see that Benjamin and Shane are okay and recovering. Cassie springs another surprise on the latter by fulfilling Megan’s wish to meet him and explain her case. She and her family get a very satisfying ending. Megan, as promised, provides the evidence against the Koreans to Shane, who ensures that Megan gets a new house, new identity, and adequate security for being in the Witness Protection program of the CIA. She finally as won the love f her family back and her own dignity.

Dot then reveals to Cassie that Grace wasn’t the only one who was using the impersonator avatar to malign Cassie. She shows a photo where a second person has also donned the same getup. Dot takes her not to the office – for some weird reason – but to her own apartment. While freshening up, Cassie notices a bottle of Santal 33 (Annie mentioned that the killer has a great choice of perfume and uses this in episode two). This sends her mind spiraling into going back to many incidents that involve Dot but she didn’t see it at the time. She concludes that it is indeed Dot who used Grace to her advantage. She confronts her about it but finds that Dot has already planned to kill her. She triggers an alarm and the guards walk in to arrest Dot. It was in fact a call made from Benjamin that made it possible. Dot sold classified CIA records for money and did so in the case of Will also.

Now that the impersonator business is over, Cassie turns to Davey, who has dropped several messages to her during the day. She calls him but Jenny picks up the phone. When Cassie reaches Jenny’s house, she notices Davey lying unconscious on her sofa and a wall covered with numerous photos of Bucky, Cassie’s lover and the murderer from season one. How about that for a return! In a huge twist of events, Jenny first contacted Bucky when she read about the high-profile murder. She met him in jail and instantly fell in love with him. But Bucky was still hung over his ex, i.e., Cassie. In a manipulative move, he asks Jenny to kill Cassie to enable him to love her (whatever that means).

Jenny herself needs little encouragement to do maniacal things. From her conversation, it seems she herself is a psychopath (I am not being judgmental here). She comes at Cassie with a hammer but isn’t able to land a blow. Cassie runs into another room but Jenny soon catches up. Our adorable flight attendant is cornered but Davey regains consciousness just in time to save the day. Annie and Maz finally get married after the events have cooled down. Cassie is back to being a flight attendant and a month sober, having quit her job at the CIA. Life is normal again – at least until another season is made. Rather, if it is made.

The closing of the season is a bit underwhelming. The big, excruciating buildup demanded a more detailed explanation for each element of the narrative. The final episode was nowhere near the season’s best work that came and went in the middle of it. There was a decent amount of time given to the character backgrounds and setting the motivations clear. If one looks back at the barometer around episode five, it was raging hot. The blonde impersonator seemed like an extremely smart, well-organized killer hell-bent on making Cassie a victim to a bigger ploy. The carefully curated moves to put Cassie on each and every crime scene indicated that the person had a compelling reason. Otherwise, why would you go through all of this?

Providing access to CIA records for money? Is that a proportionate answer? Certainly not in my book. This seems too fragile a reason to support this big conspiracy. Season one ended brilliantly with the involvement of the Sokolovs and related entities. This season, the writers peaked out on ideas. While the central premise made a lot of sense and was mostly atmospheric, the way the season has ended has left a bad taste. Kaley Cuoco can walk with her head held high. She is the only actress – besides Sharon Stone in the cameo – who was allowed to be vulnerable on screen. Her beautiful performance deserves Emmy attention and I am sure she will be among the favorites to win. If not for her, I don’t think so many would have continued watching the season. Her adorable goofball character had tremendous depth that the writers actually explored well. The macro issues aside, season two of ‘The Flight Attendant’ provides a riveting insight into Cassie’s journey of self-discovery and chasing the elusive calmness of the mind that few manage to find.

10 Movies to Watch if You Like Confessions of a Shopaholic