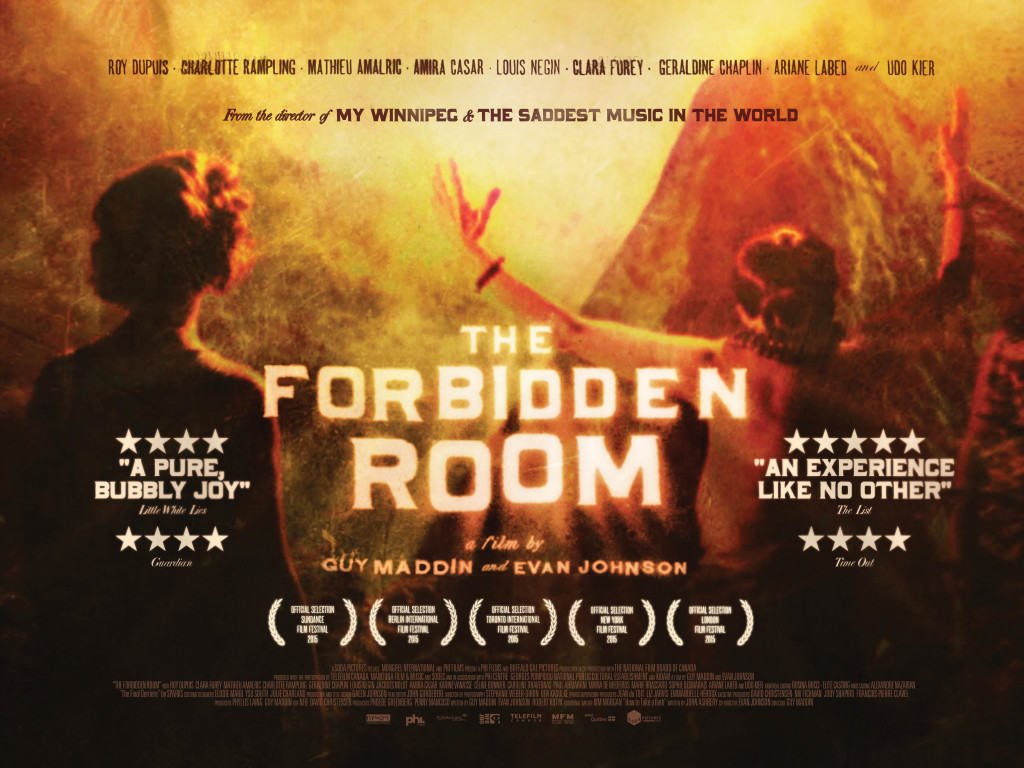 Not to be confused with Room

Jack: Dumbo Ma! Old Maddin can do anything, by magic. 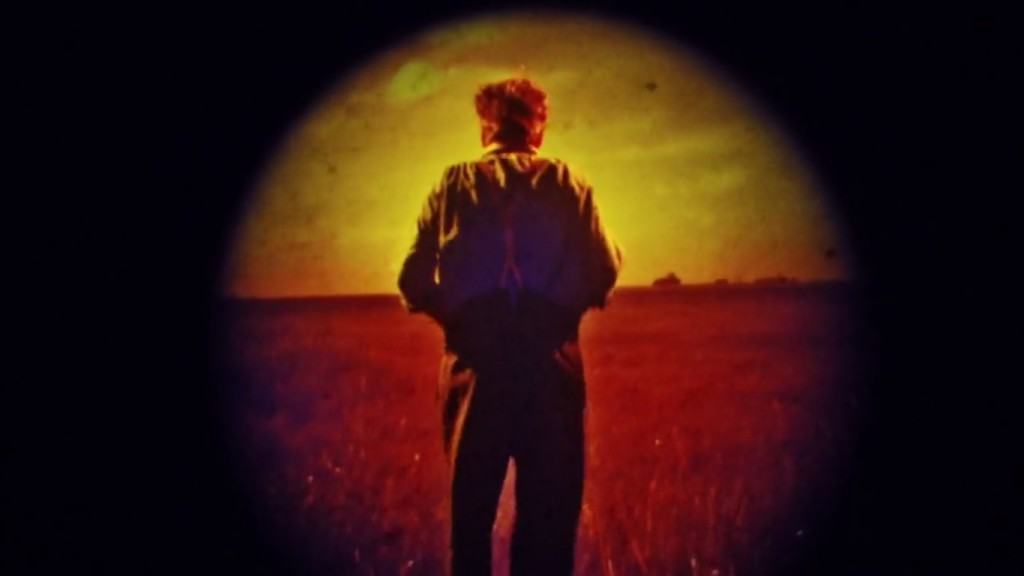 Guy Maddin is the Janus of cinema, the two-faced God of thresholds, of beginning and transitions, of doorways, and most essentially of lost cinema. His one face is towards the dusk of silent cinema and other towards the dawn of digital cinema. He gazes into past and at the same time leaps into future. In his latest quest, the Knight (Guy Maddin), along with his squire (Evan Johnson), enters the forbidden territory of past to rescue the films of bygone era, films that were burnt into flames, films that were dumped into ocean, or the films that never existed. The fragments of lost films are then collected and encased in an unending spiral of nested stories. Such heavenly keeping is the work of Janus. Alas, for some, it is ugly and frightening. 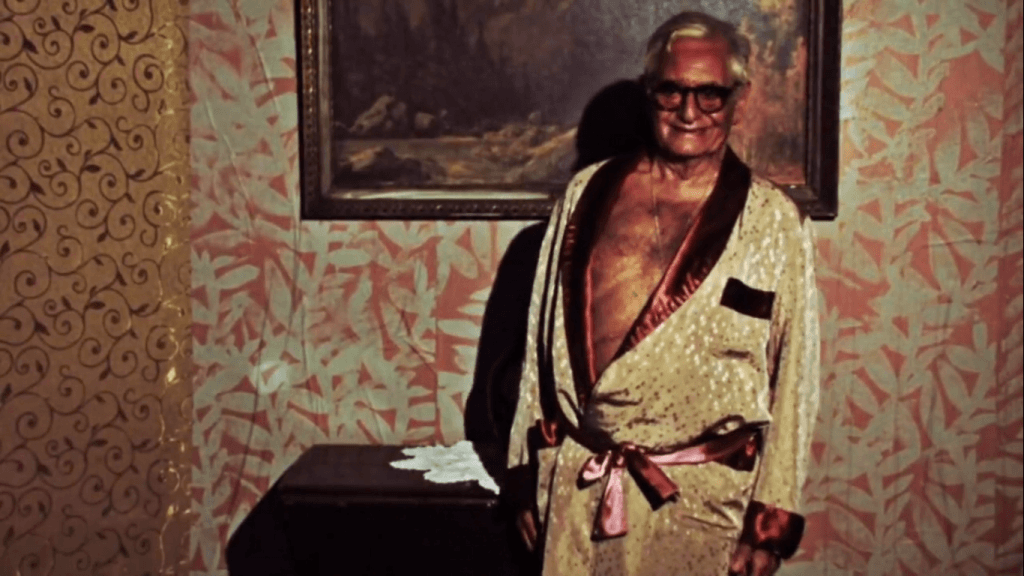 How to Watch The Forbidden Room

Watching The Forbidden Room is like taking bath in a tub filled with jelly of melted celluloid. Many will find the piquant vinegary aroma of distant past agitating. Those expecting casual Saturday bath will jump out of it as soon as they insert their first toe, but even for connoisseurs, this bath of madness can be tough to completely immerse themselves in. Watching The Forbidden Room is an experience no one is fully prepared for, not even ardent fans of Guy Maddin. In one of the prestigious film festivals, The Forbidden Room lost around 80% audience within first half hour, and later I found out those walk-outs were universal. Coincidently, around 80% American films are lost from first few decades. How ironic it is, that a film about lost films loses its audience! Here is my guide on how to watch The Forbidden Room:

You’re now standing at the entrance of a cave. It’s the cave of forgotten films. You step inside the cave and walk hastily on the rhythm of menacing melody of Wolfsong. As you walk deeper and deeper into the cave, you feel the presence of spirits of lost films all around you. Now you’re at pink warm centre of cave. Prepare yourself for the ultimate séance, where you’ll confront digital ghosts of what was once a breathing film. You’re about to enter the afterlife of bygone cinema.

To watch The Forbidden Room, is to make sense out of senseless. On surface, it appears like a tediously tawdry exercise in digressive cinema, with Maddin’s customary perverse playfulness and amplified melodrama, but beneath the sea of stories there lies a doomed submarine that contains a blasting jelly, melting by every minute. In the pink warm centre of the cave, lives an amnesic girl who’s trying to find her place in the world. The doctor never gives up on his patients, whether he is an old man plagued by bottoms or a young woman with 47 broken bones. The Forbidden Room is more than just adaptation of one lost movie after another. It’s about restoring something that has been severely damaged and is beyond repair. Once you enter the cave of forgotten films, you’re trapped. There is no way out.

Maddin: I’m not giving you a movie. I am making something else for you. Wanna know what I’m making Ringo?

“When they were filled, he said to his disciples, gather up the fragments that remain, that nothing be lost.” Now…I been saying that shit for years. I never gave much thought to want it meant. I just thought it was a coldblooded quote to put in the beginning of a movie. See, now I’m thinking, maybe it means that I need to go back in the past. Not my past, I’ve been doing that shit for 30 years now. No more Winnipeg or badass mother. That shit ain’t the truth. I’m tryin’ Ringo, I’m tryin’ real hard to be that disciple. One day my righteous ass will gather the fragments of lost films, and create a spectacle of pure madness out it, with preferably Charlotte Rampling in it. Yes, I’d like that.

In The Forbidden Room, Maddin has re-envisaged a bunch of lost films, based on their titles and synopsis. There are around 17 concentric story fragments, tied together by one of the most intriguing monologues by Louis Negin about ‘How to Take Bath’ (written by John Ashbery). There was a list of hundreds of films that Maddin wanted to remake, including titles like ‘The Strength of Moustache’, ‘Ladies be Careful of Your Sleeves’, ‘Fist of a Cripple’, ‘Cat girl’, ‘10 Scars Make the Man’, and so on. Some of these films were never made, eagerly waiting to be created by someone. Some of these films got lost because of lack of storage facility. Each broken bone is healed, only to crack again. The structure of movie is so fractured, thanks to plaster of humor and tapes of ceaseless action that keeps it intact.

Herb: To The Forbidden Room?

Dan: I had a dream about this movie.

Dan: See what I mean?

Herb: Okay, so you had a dream about this movie. Tell me.

Dan: Well, it’s the second one I’ve had, but they’re both the same. It’s not present. It’s kind of half past, half future, you know? The movie starts with the trippiest opening credits. I’m all scared and startled, like I can’t tell you. It’s almost as if celluloid melted on screen. I could smell chemicals coming off screen.

Herb: what else do you expect? It’s fuckin’ Guy Maddin movie.

Dan: No you don’t understand. It’s unlike anything you’ve seen before. With its raw and extremely dispiriting color, the movie itself looked like destroyed film prints melting into one another.

Herb: All of his movies have grainy and grimy texture that recalls silent era of cinema. He is known for making black & white films, but color sequences are apparent in his debut movie ‘Tales from Gimly Hospital’, and more so in ‘Saddest Music in the World’, which has fantastic usage of primary colors.

Dan: I hope I never see this Forbidden Room, outside of dream, that’s it.

Herb: You came to The Forbidden Room to tell me this?

Dan: To get rid of those trippy, never ending images.

If you’ve watched previous movies of Guy Maddin, you probably know that his films are extremely personal. They feature the protagonist named Guy Maddin who lives in Winnipeg. All of his movies revolve around his childhood traumas, amnesia, dead father, mother’s saloon, and quintessentially Winnipeg. The Forbidden Room is exception, for there are icy landscapes here too, but frozen horses are missing. No more sleepwalkers or Winnipeg Maroons. This isn’t a movie about world capital of sorrow or coldest city in the world, it’s about mystical land of past that everybody seems to have forgotten.

Shit Mael brothers have made another song with Maddin guy called ‘The Seduction of Ingmar Bergman’. This motherfucker is genius Silent Bob. I LOVE SPARKS!

The experience of watching cinema in darkened hall among strangers can be equated with Séance. Communion is the essence of cinema. The Forbidden Room is one of the rare modern films that can be viewed as surrealist. It relates to cinema watching experience, in which viewer enters the cinema hall randomly, irrespective of what is showing. His aim is to get enchanted. He leaves the movie at the first hint of boredom and rushes off to another cinema. The Forbidden Room is constructed in similar fashion, before one story is over, you find yourself in a different one, with new characters. After a while you lose the track of where you are, as if you’re drowning in narrative.

Madness can be defined as ‘a state of severe mental illness’ or ‘behavior or thinking that is very foolish or dangerous’.

The unit of Madness is ‘Maddin’, after famous Canadian auteur Guy Maddin, who is considered ‘God of Madness’ among certain tribes.

Here is graphical representation of some of the feature films of Guy Maddin, where X axis indicates Madness index and Y axis indicates movie along with its year of release: 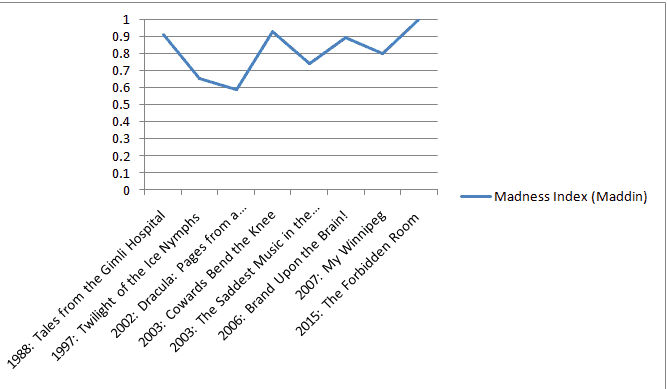 If you observe above graph carefully, despite its poor presentation, you’ll realize that in The Forbidden Room Maddin went full Maddin.

The Forbidden Room can be described in three words: Dreams, Visions, and Madness. Following pie chart indicates the amount of each component in movie: 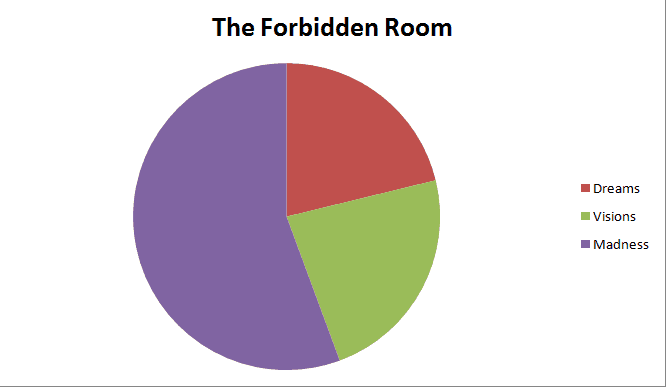 This is the moment when you feel lost. But you’ve been lost ever since you entered the cave of forgotten films, like those characters of LOST, who didn’t realize they’ve been dead until very last episode of series. What a disappointment! Watching The Forbidden Room is as exhausting as it is exhilarating. By the time ending credits roll, and if you’re still there, your brain is over-saturated with images and is on verge to explode. Of course there is abundance of madness here, but it is well calculated and well directed madness. I know you’re running out of patience, but if you sit tight and see it through, you’ll find your power animal at the end of cave, with a jar in its hands to capture your soul.

Bruce: The Book of Climax wouldn’t help. I knew this movie will never end. I liked ‘My Winnipeg’ but this is a bit too much Alfred. He crossed the line.

Alfred: Yes, he crossed the line. He squeezed them, hammered them to the point of desperation. And in their desperation they misunderstood this masterpiece. But with all respect Master Wayne, perhaps this is a man that *you* don’t fully understand, either. A long time ago, four men set out on a quest to rescue Morgot from Red wolves. The three gifted comrades fled, sensing the fear, but a brave lumberjack continued. On approaching the pink warm centre of cave, he noticed that there was no one to be saved. Margot had been long lost. But he retrieved her anyway.

Bruce: So, why rescue someone if she’s already dead?

Alfred: Well, because he thought it was a good sport. Because some men aren’t looking for anything logical, like money. They can’t be bought, bullied, reasoned, or negotiated with. They just DON’T want to watch films burn.

End of End of Review

Some people are meant to be attacked by a bear, some get molested by priests, some grow potato on Mars, some know how to play flame-throwing guitar in the middle of war, some are immigrants, some are spies, some live in the room, and some are Aswang bananas.

That’s what The Forbidden Room is all about.

After reading this lengthy and pointless review (?), or reading certain portions of it, if you’re still wondering whether you should watch this movie or not, the answer is simple: 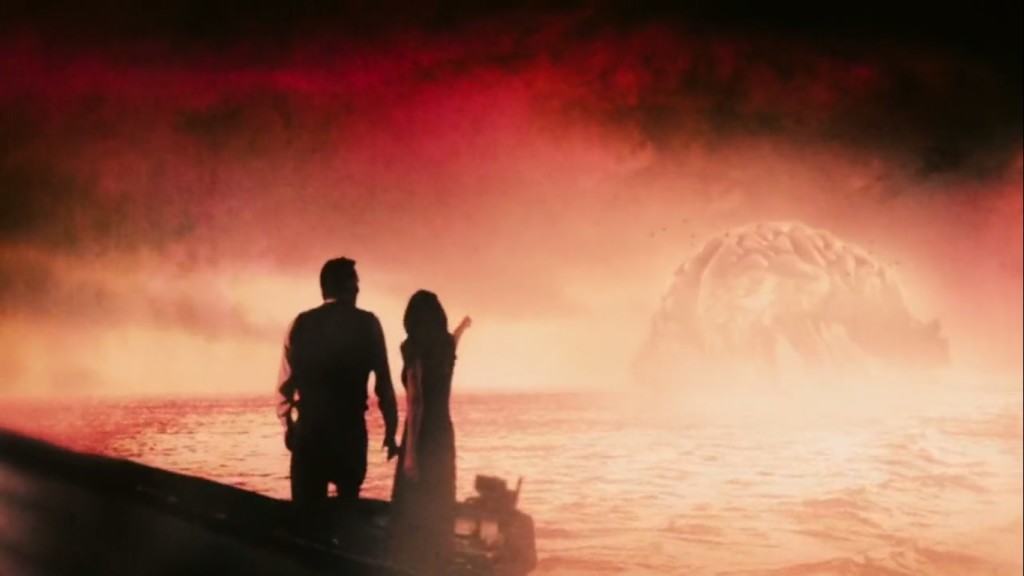