“The Funeral (1984) offers an interesting commentary on the ways modern Japanese society endeavors to adapt itself to the strictures of cultural values.”

Juzo Itami, a renowned television and movie actor, made a late-career shift into directing and screenwriting – at the age of 50 – and went on to become one of the formally and thematically original voices of Japanese cinema. Internationally known for his ‘noodle western’ Tampopo (1985), Mr. Itami directed ten feature films between 1984 and his tragic suicide in 1997 (though contentious theories claim that it’s murder). A distinct satirist, Itami’s works thought-provokingly as well as hilariously questioned what it means to be Japanese in the modern world that’s reaping the riches of Japan’s post-war ‘miracle economy’. Viewed with an anthropological lens, the film-maker often zeroes-in on the social behavior of an individual in a society whose traditional values are perpetually engaged in conflict with their modern western values.

The Funeral (Ososhiki, 1984) marks Juzo Itami’s directorial debut, a quirky yet very humane situation comedy. It opens with the death of a family patriarch and goes on to meticulously document the human idiosyncrasies and emotions evoked by the three-day funeral gathering. Wabisuke Inoue (Tsutomu Yamazaki) and his wife Chizuko Amamiya (Nobuko Miyamoto – Itami’s wife) makes their living as television actors. They receive a phone call on the set, informing the death of Chizuko’s father.  Shokichi Amamiya (Hideji Otaki), a former brothel owner, has endured the hardships of post-war Japan with his compassionate life-partner Kikue (Kin Sugai). 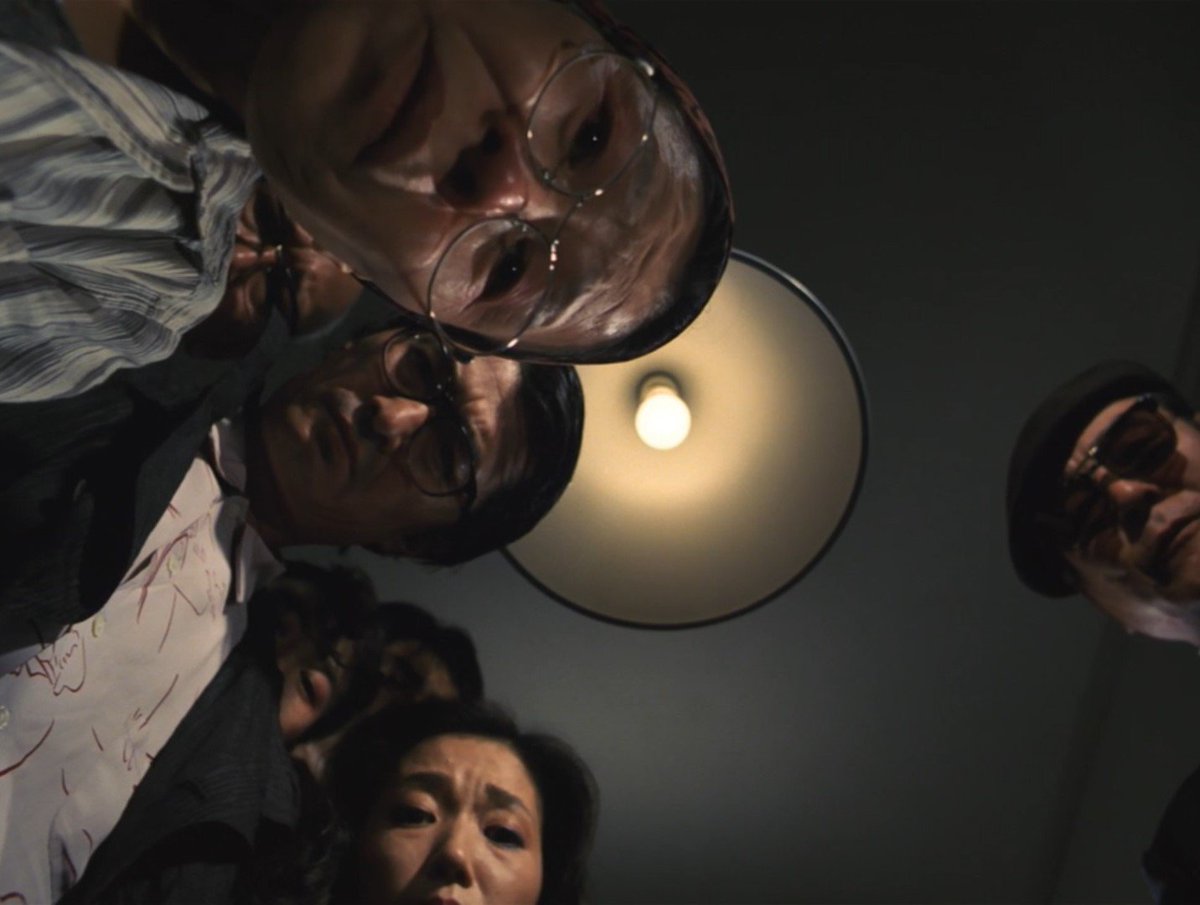 When the movie opens, Mr. Amamiya is seen returning from Tokyo after a full medical check-up. Satisfied with the results, he returns to his son-in-law Inoue’s country home in Izu, now the old couples’ retirement villa. Immediately after his return, Amamiya orders his favorite dishes – the ultra close-ups of food and eating featured here became a prominent stylistic statement in Itami’s next feature Tampopo. Soon after the hearty meal, the sixty-nine-year-old Amamiya has a heart-attack, keels over in the patio overlooking gorgeous scenery. He later dies at the hospital.

Related to The Funeral: Sieranevada [2017] Review: A hilarious Family Reunion

Narrated in voice-over by Wabisuke Inoue, The Funeral chronicles the small challenges faced by the affluent, bourgeois family in conducting the traditional, Buddhist funeral ceremony. Devoid of big dramatic moments, Itami’s visually inventive dramedy subtly touches upon the grief and the quirkiness lying beneath the process of ‘properly’ sending off a loved one.

Mr. Itami has an eye for conceiving WTF visual gags that are brilliantly composed and edited to perfection whose full-force of the humor can only be experienced, not explained. For instance, when Wabisuke has a quickie in the woods with his former lover, the amorous coupling cuts to Chizuko swinging back and forth on a hanging wooden swing in an outrageously suggestive manner.  Itami also derives understated humor from the situations itself. The narrator and protagonist watch an instructional video titled ‘The ABCs of Funeral’. Something that would resonate with the YouTube generation as the man attempts to preserve the ways of tradition even though he is totally detached from it. Shokichi’s irritating elder brother adds layers of hilarity to the proceedings since he constantly debates over the protocols of the ceremony. As more relatives and more bottles of sake are brought in, the idiosyncrasies of the rowdy group of men offset the general mournfulness of the gathering.

What particularly makes The Funeral an enriching movie experience is a balance Itami maintains between ribald humor and earnest emotions. Unlike some of his later works, Itami’s characters here aren’t reduced to stereotypes. His men and women are decidedly selfish who are so preoccupied with doing what is expected of them. Yet despite such a pervasive atmosphere of selfishness, Itami includes honest and heartfelt moments where his characters don’t just go through the motions. Perhaps, there aren’t any visible transformations, but the very humane moments in the funeral distracts them – for a while – from their self-absorption.  A candidly shot home movie with silent cinema & picture-book aesthetics plus the widow’s unconventional and touching speech about her husband’s final moments brings Itami’s underlying earnestness to the fore.

Before making his directorial debut, Itami played a key role in Yoshimitsu Morita’s biting satire The Family Game (1983). Itami’s cramped compositions and controlled arrangement of characters in the frame frequently reminded me of Family Game. Nevertheless, while Morita’s frames are so precise, Itami allows his camera to wander off in order to collect copious details. In one scene, when the priest (a delightful cameo from Ozu-regular Chishu Ryu) is conducting the funeral ceremony the family members uncomfortably sit in seiza-style, the camera closely observing their cramped, stockinged/socked feet.  Eventually, The Funeral is oddly humane. The stringent traditional values and callous modernism try to sap the humanity out of the funeral rites. But somehow the people aren’t far removed from emotional ties. An unexpected moment of family members looking into the cremation furnace and the ensuing conversation with the young furnace operator initially comes across as weird but gradually gathers a humanistic tone.

Overall, The Funeral (124 minutes) is a nuanced social comedy, embellished by both its characterizations as well as the form. It offers an interesting commentary on the ways modern Japanese society endeavors to adapt itself to the strictures of customs and cultural values.