“Growing up is not the problem. Forgetting is”

It is a huge risk to adapt a beloved children’s novella like The Little Prince, which is one of the most translated books in the world (translated to more than 250 languages) and sold more than 14 million copies worldwide. Although its water-color illustrations feel akin to children book, French author Antoine de Saint-Exupery’s observations on human condition in “Little Prince” are more poignant than what we witness in some credible, modern adult fictions.

Nevertheless, American animator & filmmaker Mark Osborne’s “The Little Prince” (2015) deviates so much from the source material which makes us use the term ‘loosely based on’ rather than ‘adapted’. The film adds an extra layer to the source material and this layer very much reminds us of Pete Docter’s tale of friendship between an old man and a boy, “Up”. Of course, the uninitiated would only have a simple question: Is it good? Yeah — in many ways. It’s a little rudimentary but it is hard to be not enamored by this sweet, charming tale.

Coupled With The Little Prince: Anomalisa (2015)

In spite of what the title says, a ‘Little Girl’ is the protagonist of this animated tale. She is trained by her workaholic mother to have a one-dimensional perspective on everything, including life. The mother & daughter’s lives are occupied with lines & logic (they stand like a ruler even when brushing their teeth). The world they live in, which is filled with drab condos & suited humans, seems two dimensional. Of course these beings are bothered by time and that’s why they treat childhood as a phase to plan out one’s life in detail (“You’re going to be wonderful grown-up” tells the mother). In the opening scene, the mother’s plan to make her daughter to join in prestigious ‘Werth Academy’ is spoiled. So, she opts for ‘Plan B’, which is to move to a new neighborhood and make her daughter study for the whole of summer holidays.

The girl’s mother has made a schedule out of every single minute available in the holidays. But, the one-dimensional drive of the girl is soon shattered as she meets an old, eccentric next-door neighbor (living in a ramshackle house). The old man known as ‘Aviator’ has a broken-down plane in his backyard, which he tries to start every now and then, scaring the sullen neighbors. He tells her the story of how he met a Prince, hailing from asteroid B612, who in turn has been acquainted with lot of stranger characters. Gradually, the girl loses interest in lines & logic and beholds the wonders of childhood in the old man’s garden. For the first time, the girl understands the profundity of life. 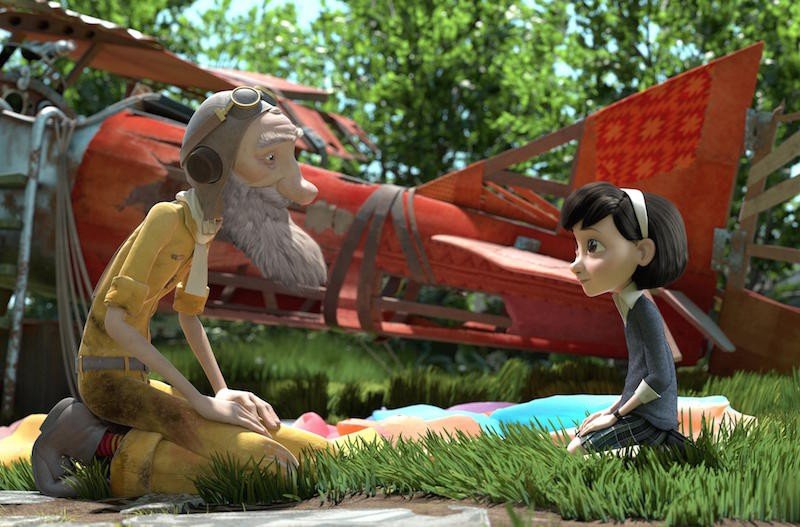 Even though Osborne and writers Irena Brignull & Bob Persichetti (veteran writer of ‘Dreamworks Animation Studio’) have added a lot to make up for the narrative slightness of source material, they have done good in not turning it into a typical Hollywood entertainment piece. The melancholic mood that prevails in the book is wonderfully maintained and even the extraneous story-line perfectly reflects the themes encountered in the novella. Loss, friendship and remembrance are some of the vital themes contemplated.

The adventure of little girl on a quest to help ‘aviator’ (in the third act) strongly pays off for the themes of ‘Forgetting one’s own dreams’ or ‘forgetting childhood’. This adventurous journey, of course, fails to imbue the near-mythic sensation as the previous acts. The subtle critique on socioeconomic hierarchy in the end seems too complex a theme to be included in a children’s tale. As expected, there is a bit of melodrama, but the character turns those moments into a noble gesture, which in turn made by eyes wet.

Similar to The Little Prince: Every Studio Ghibli Movie Ranked

What makes The Little Prince a delightful experience, despite the aforementioned turbulent narrative traits, is its resplendent images evoked by director Mark Osborne. He uses an enchanting wild-color palette to detail the aviator’s house, while goes for a bland, grey palette for coloring the urban centers. He is also more patient in staging the sequences, which is vital in showcasing the character’s yearning. Osborne makes perfect use of computer-generated animation (for the girl’s story) and stop-motion animation (for prince’ story) and seamlessly blends them. The use of stop-motion animation is probably evoked to provide a fitting tribute to the illustrations of Saint-Exupery.

The Little Prince (106 minutes) provides effective entertainment for the child within all of us. It does stumble a bit due to thematic largeness, although the extremely beautiful images are a joy to behold.

The Little Prince (2015) is currently streaming on Netflix