Episode 4 of The Offer (2022), titled ‘The Right Shade of Yellow’, largely centered around casting Marlon Brando (Justin Chambers) and Al Pacino (Anthony Ippolito), dealing with Sinatra’s (Frank John Hughes) bad-mouthing of the Italian-American Civil Rights League, and Al Ruddy (Miles Teller) finally realizing how dangerous Joe Colombo (Giovanni Ribisi) actually is. Eventually, Ruddy manages to get both Brando and Pacino as Vito and Michael Corleone, respectively. But at the last moment, Pacino backs out, saying that he has signed a feature film deal with MGM because he assumed Paramount would never cast him. This breaks Ruddy and takes him down a somewhat dark path.

Directed by Colin Bucksey and written by Michael Tolkin and Leslie Greif, the operative word for Episode 5 is a compromise, and how it can sometimes lead to good things and sometimes it can lead to more problems. Throughout this episode, we see multiple characters make various kinds of compromises in order to achieve whatever goal they have in mind. When it comes to the making of The Godfather (1972), that usually leads to progress. But when it comes to production, things look iffy. And the overarching theme of compromise is exemplified by Ruddy who finds himself going deeper and deeper into Colombo’s grasp with every decision he takes to get the movie made. The only plus point of it is that his struggles always end up bringing the rest of the cast and crew together because their goals align with Ruddy’s, which is a wholesome thing to witness.

The technical side of The Offer continues to be one of its best aspects. There’s no doubt that the production design, hair and make-up, and art direction teams have aced and that’s why the miniseries looks so amazing in every frame. But since this episode is funnier than the last four, you should keep an eye out for Salvatore Totino’s cinematography and Tanya M. Swerling’s editing. Especially in a scene where Fogler and Teller have to meet up with Gorman who is insanely angry. The beats that lead up to the moment where they enter the office are so perfectly done that you have to repeat it a few times, just to enjoy the rhythm. And the best thing about it is that the humor is actually understated. Nowadays, comedic scenes need a character who will point it out to the audience that it’s a comedy scene. There’s nothing like that in The Offer (which is a relief, nowadays, and an indication of how low the bar is) and that’s what makes it awesome.

While Matthew Goode and Miles Teller continue to be the shining stars of the miniseries, this episode gives a lot of attention to actors inhabiting the members of the Corleone family. The dinner-table scene is a little over-the-top, maybe. But there’s something tangible in the air when you see them get along. And there are so many layers to it. Because the actors have to gel together as the actors they are playing in The Offer, and they have to gel together as the characters whose roles they are playing in The Godfather. It’s undeniably astounding. Patrick Gallo’s absence is palpable. That’s because Puzo was probably not all that involved in The Godfather’s pre-production. However, it also shows the impact Gallo has made in the first four episodes, so much so that you want history to play out a little differently so that you can have more scenes of him. Also, Colin Hanks and Paul McCrane are doing a splendid job of playing two of the biggest a-holes in the production of The Godfather. 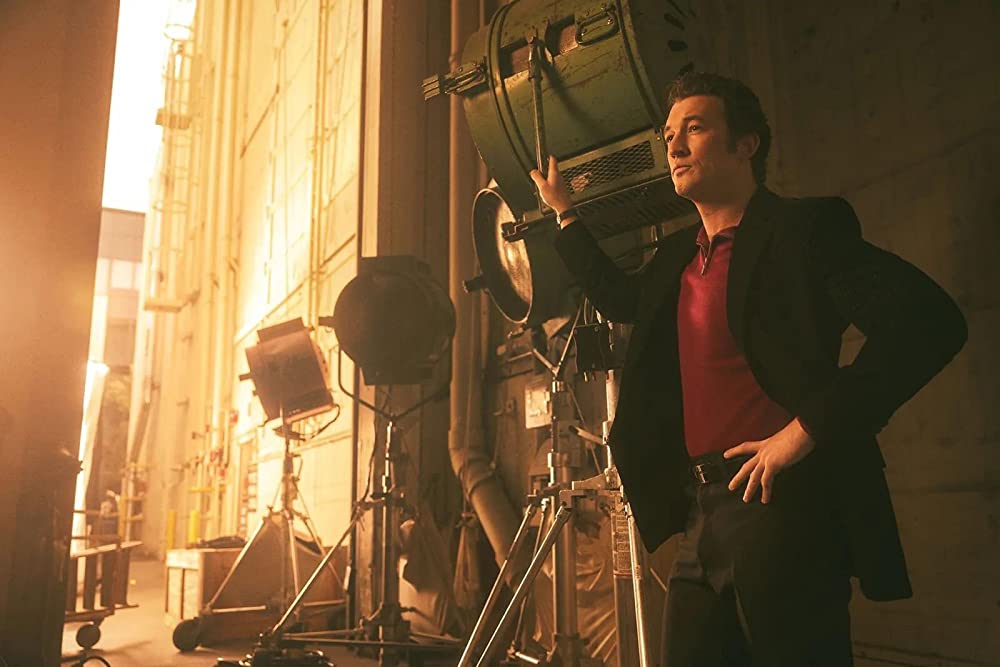 Spoiler Warning: From this point onward, this article contains significant spoilers for The Offer Episode 5

The episode titled ‘Kiss the Ring’ opens with Gino (James Madio) and Caesar (Jake Cannavale) driving a truck on the highway. They get pulled over by ‘Crazy’ Joe Gallo (Joseph Russo) and his men and they start shooting at the truck, killing Gino in the process. Gallo lets Caesar go so he can relay what just happened to Colombo.

Ruddy visits Evans (Matthew Goode) to get Pacino (an actor that Evans loathes) out of the project he has signed so that he can star in The Godfather. Meanwhile, Barry Lapidus (Colin Hanks) is heading the process of off-loading Paramount from Gulf and Western because according to him it’s not exactly profitable and there are suitors lined up to take it. At The Godfather’s pre-production office, Francis Ford Coppola (Dan Fogler) gets the news from Bettye (Juno Temple) and Andrea (Stephanie Koenig) that Pacino is out of the movie. As Coppola has a meltdown, Evans, along with Ali MacGraw (Meredith Garretson), watch Panic in the Needle Park (1971) to understand if Pacino is the real deal, like Ruddy and Coppola keep saying.

Ruddy returns to The Godfather’s pre-production office only to learn that Gino is dead. Bettye then gives him even worse news: Jack Ballard (Paul McCrane) and potential editor Aram Avakian (Geoffrey Arend) are there to meet him. Aram is basically a Gulf and Western plant to make sure that the movie doesn’t go over-budget. Evans has a meeting with the head of MGM head James Aubrey (Charley Heydt) to take Pacino from them. Evans, surprisingly drives a hard bargain and gets Pacino back into The Godfather. As this problem gets solved, another arises in the form of permits to build sets getting canceled. Probably by Congressman Mario (Danny Nucci). Ruddy tries to solve that and he gets the news that the official who gave him the permits has been fired.

Colombo plans to take on Gallo via the Commission but he’s stopped in his tracks by the FBI (sent by Congressman Mario, of course). Evans lets Ruddy know that Pacino is in. In The Godfather pre-production office, cinematographer Gordy Willis (T.J. Thyne) and Coppola have a huge argument about whether the lighting and set design should allow the actors freedom to move or restrict them to their marks. Ruddy momentarily halts by passing on the news about Pacino’s casting. Then he goes to Colombo’s to pay his respects to Gino. Ruddy tells what Congressman Mario has done. And since Colombo has a bone to pick with the Congressman, he meets up with him to give him the lowdown. Colombo threatens Mario with his upcoming election and he immediately melts and agrees to get the Feds off of Colombo’s back and give the permits that The Godfather’s team needs. 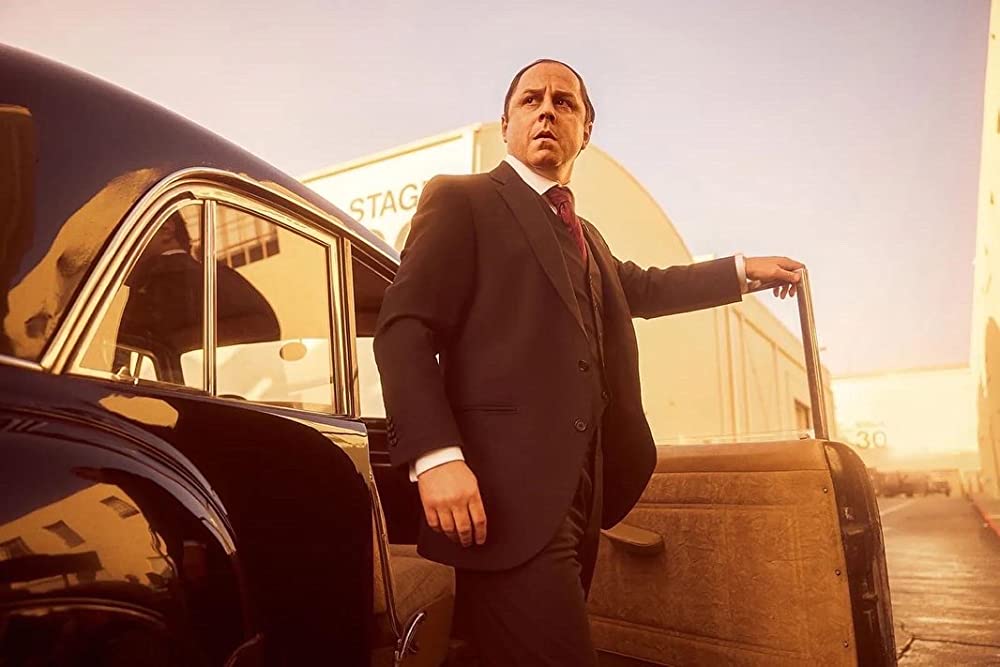 While Evans wonders about the fate of Paramount, production designer Dean Tavoularis (Eric Balfour), Ruddy, Coppola, and Willis have a conversation about perfecting the street leading up to the Corleone household. But then the topic of the fully-functioning kitchen comes up which is going to definitely make the movie go over-budget. Ruddy even calls for a meeting because Coppola is so adamant about the kitchen being a real one. And just when they seem to be reaching a middle ground, Ballard barges in to talk about budget cuts. Later, Eastman meets up with Ruddy to talk about a problem. Ruddy thinks it’s about them hooking up. Eastman says that they’re adults and professionals and they should move on and work towards casting Luca Brasi.

Evans has a falling out with MacGraw over her wanting to play a part in The Getaway (1972). Ruddy takes Coppola to meet Bluhdorn (Burn Gorman) to talk about the budget but they catch him in a very bad mood. But Bluhdorn makes them an offer anyway. He says that they can get their $6 million only if they agree to pay via their salaries if the budget exceeds even that amount. Ruddy hesitates but Coppola agrees. Ruddy and Coppola attend a dinner with the part of the cast that makes the Corleone family and they watch them come together as if they were born to play those roles.

At The Godfather’s pre-production office, Bettye reveals the information that while seeing where they can make some budget cuts, she has found out Colombo’s men, disguised as members of the crew, are taking pay cheques. And one of them is Caesar. Ruddy has a chat with Caesar and he fails to convince him to not be there on Gulf and Western’s payroll. Subsequently, two FBI agents pay Ruddy a visit to ask him about his association with the mafia. Ruddy thinks he is in deep shit but the Federal agents turn out to be fans of his work. So, they let Ruddy off with just a warning about Colombo and the mafia. They propose if they can put a wire on Ruddy to keep a closer eye on him. But Ruddy refuses to do anything like that.

Evans gets a call from Lapidus about Love Story’s (1970) success and Lapidus congratulates Evans. But then Lapidus hangs up the phone very abruptly, causing Evans to panic. He realizes that Lapidus is trying to sell Paramount. Bluhdorn goes for a date with Bettye where Bluhdorn offers Bettye to work for him. Bettye rejects the offer. Bettye then realizes that Bluhdorn is selling Paramount and that’s why he wants Bettye to come work for him. Bettye relays that information to Ruddy. Evans goes in hyperactive mode and says he’s going to double down on The Godfather. Ruddy goes to meet Colombo and ends up in a press conference where Colombo is announcing his support for Congressman Mario. In addition to that, Colombo makes his relationship with Ruddy public, thereby sending the message that Paramount and Gulf and Western are in cahoots with the mafia.

The Offer Episode 4 is now streaming on Voot Select & Paramount+.