Written and directed by Alankrita Shrivastava, My Beautiful Wrinkles is about Dilbar (Sarika). She is an aging woman whose life swivels between playing cards with her friends, grandmothering Siya (Ahsaas Channa), criticizing Nilofer’s (Tanvi Azmi) book, and mentoring Kunal (Danesh Razvi) for his job interviews. She’s separated from her husband and a car accident from her past continues to haunt her and her approach towards romantic relationships. But Kunal’s obsession over her, pushes Dilbar to reconsider if she should give love a chance again. 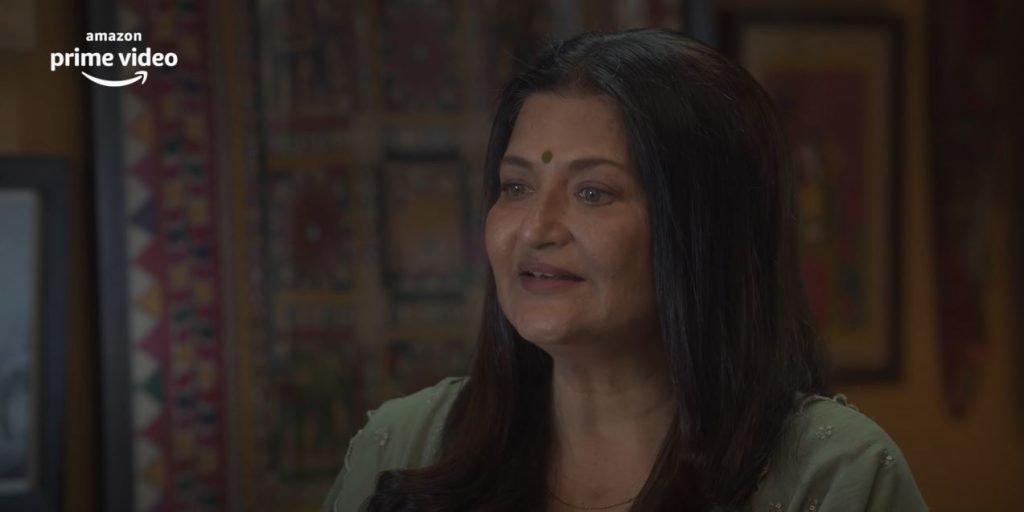 The direction is stilted. The writing is stilted. There is a running motif about imagery and photography and yet, there’s not a single composition by cinematographer Akshay Singh that echoes that. On top of that, every frame seems washed out and not properly color-graded. The performances are so incredibly awkward that 40 minutes seem like 90 minutes. There’s no doubt that Sarika, Ahsaas, Danesh, Navneet Nishan, Purnima Rathod, and Yamini Das are talented actors. But due to the off-kilter editing by Charu Shree Roy and Shrivastava’s direction, every beat between every line makes it seem like the actors are trying to hit their marks instead of inhabiting their characters. There’s no chemistry to be found. Hence, the whole exercise seems tiresome.

Directed by Hansal Mehta and written by Raghav Raj Kakker, Kashyap Kapoor, Mehta, and Ankur Pathak, Baai follows Manzu (Pratik Gandhi) who is returning from Goa to Mumbai after many years. He enjoys a healthy relationship with his sister Rehana (Kashmira Irani) and brother-in-law Zohaib (Rushad Rana). But things are quite strained with his father Shabbir (Talat Aziz) and mother Shaheen (Manasi Joshi Roy) because Manzu is gay. And, hence, this return to Mumbai involves meeting with his ailing Baai (Tanuja Samarth), disclosing his relationship with Rajveer (Ranveer Brar) to his parents, and reliving the horrors of the Bombay Riots.

Although the problem is probably staring at everyone right in their faces, it needs to be pointed that a bunch of straight, men from Hindu backgrounds are here to tell the story of a gay, Muslim man. In fact, you’ll find this to be a running theme in the anthology series where people from majority communities appropriate the stories of minorities or merely use them as window dressing. In Baai’s case, those very real horrors are even used as trauma porn. There’s a line (it’s bad enough to be lodged in my brain) which says that if Baai, the character, has survived the 1947 Partition and the Bombay Riots, she can handle a canceled marriage. And it’s delivered in a totally unironic, serious way. You might think that things can’t get worse than that and then Ranveer Brar starts to perform. Pratik Gandhi does his best but that isn’t enough to make this blandly shot, horribly edited, and awfully written mess watchable.

Directed by Dhruv Sehgal and written by Nupur Pai and Sehgal, I Love Thane tells the story of interior designer Saiba (Masaba Gupta) who is in her 30s and looking for love. Her confidant is Aashna (Dolly Singh) who is going through a messy divorce and they share their thoughts on the permanence and impermanence of love after every date that Saiba goes for. On the workfront, Saiba seals the deal to decorate a government-approved park in Thane. Through that project, she comes in touch with the locality’s audit officer, Parth (Ritwik Bhowmik) and they form an unlikely bond.

Masaba Gupta is such a naturally gifted actor that it’s unfair to put her in such middling pieces of entertainment. You can clearly perceive her range, in terms of her vocals, her expressions, her physicality, and yet, here she is trudging through the most boring story Modern Love: Mumbai has to offer. Bhowmik is supposed to be this by-the-numbers, reserved, introverted and non-romantic person. But he comes off as robotic, and not in a funny way. Thanks to Maulik Sharma’s editing and Dhruv Sehgal’s direction, every single scene goes on for too long. There isn’t a single frame that DOP Aniruddha Patankar composes that leaves a mark. There’s a moment where Saiba looks at a girl while being disinterested in her (male) date. Is that supposed to be a hint towards her queer side or a shared moment of disinterest in one’s respective dates? Your guess is as good as mine. Kudos to Aastha Sharma for the costume design though.

Directed by Vishal Bhardwaj and written by Bhardwaj and Jyotsna Hariharan, Mumbai Dragon is centered around Sui (Yeo Yann Yann), an Indo-Chinese mother who runs a Chinese restaurant. Her son, Ming (Meiyang Chang) is an ex-aspiring dentist and currently, an aspiring singer hoping to get his big break in Bollywood. And Sui’s love for Ming is so overwhelming that it doesn’t leave any room for Ming’s girlfriend Megha (Wamiqa Gabbi), Ming’s dreams, and the food that both Ming and Megha can eat. After finding out about Ming and Megha’s relationship, Sui takes a vow of silence until Ming breaks up with Megha and comes back to her. Sui’s one and only friend, Pappi Singh (Naseeruddin Shah), tries to act as the mediator between Sui and Ming and realizes it is an uphill battle. 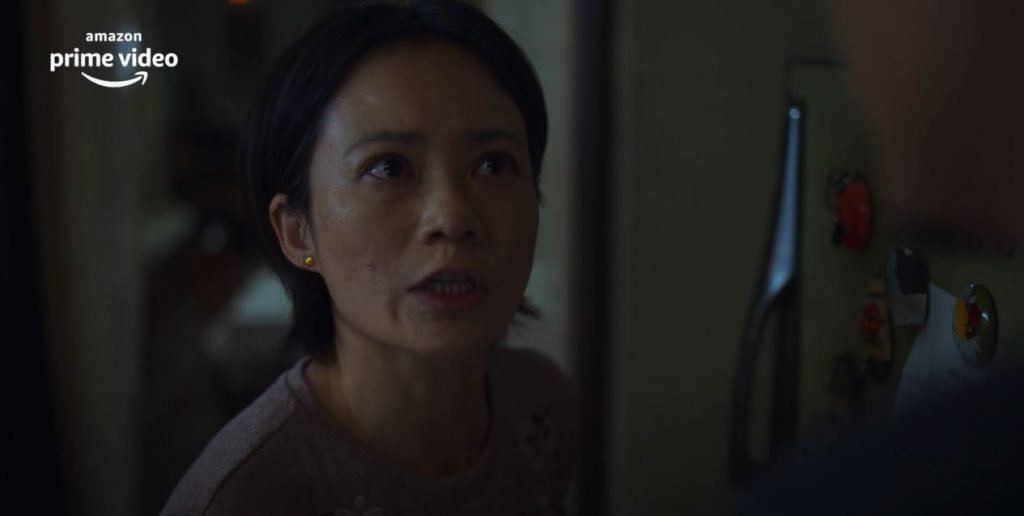 Vishal Bhardwaj is, to put it simply, eons ahead of anyone in the people in this anthology web series. His direction is so expressive, so vibrant, so lively, so dynamic that it’s unfair for everyone else. He brings out the best in Yeo Yann Yann, Meiyang Chang, Naseeruddin Shah, and Wamiqa Gabbi; giving them ample room to visualize their characters’ feelings with words and sometimes, without them. And the actors utilize those opportunities to the fullest. These characters feel, talk, and move like real people with complex, fun, and tangible emotions do. Hell, even the cameos are fantastic. Tassaduq Hussain’s cinematography, A. Sreekar Prasad’s editing, Shoumini Ghosh Roy’s production design, Sneha Kadam and Sandeep Sharma’s art direction, and Abhilasha Sharma’s costume design all come together in unique ways to tell this relatable story about toxic mother-son relationships. In addition to that, his use of food to add to this story makes the viewing experience satisfying and ignites the urge to either seek out some authentic Chinese dishes or any home cooked meal, to be honest.

Directed by Shonali Bose and written by John Belanger and Nilesh Maniyar, Raat Rani revolves around Lali (Fatima Sana Shaikh) and her husband Lutfi (Bhupendra Jadawat). Both of them are migrants from Kashmir. While Lali works as a cook in an upscale apartment in Mumbai, Lutfi works as a security guard in the same apartment complex. One day, Lutfi decides to break their 10-year-old marriage after a trivial fight over ice cream and leaves Lali with nothing but a broken, old bicycle. This forces Lali to cross the flyover, which she has usually done as a passenger on Lutfi’s scooter, on her own; thereby making it a metaphor for her journey from dependence to independence.

Fatima Sana Shaikh’s over-the-top and committed performance is probably the highlight of Raat Rani. Everything else pales in comparison. Like almost every story in this anthology series, this is a story that you’ve seen hundreds of times in hundreds of different ways. What’s so different about Shonali’s approach to it? That the protagonist is a Kashmiri immigrant? Because that, like every story centered around a character from a minority community in this anthology series, seems performative at best, exploitative at worst. The romanticization of the trials and tribulations of Lali and the comedic tone constantly clash with each other and make for a very jarring viewing. The production design by Manisha Khandelwal, art direction Ashok Panchal and costume design by Maxima Basu is commendable. Everything else isn’t.

Directed by Nupur Asthana and written by Devika Bhagat, Cutting Chai shines some light on the difficult ordeal of being a woman aspiring to be a writer while handling the ups and downs of a family life. At the age of 40, Latika (Chitrangda Singh) has started to feel that she has wasted her life looking after her bumbling husband Daniel (Arshad Warsi) and her two kids (played by Deshna Dugad and Bhagya Bhanushali). When Latika blames Daniel’s lack of support when it comes to her finishing her book, Daniel says that if she wanted to finish the book, she would’ve done it already instead of blaming him. This sends Latika on a revelatory, albeit internalized, journey through her past, which is intertwined with the CST Railway Station. 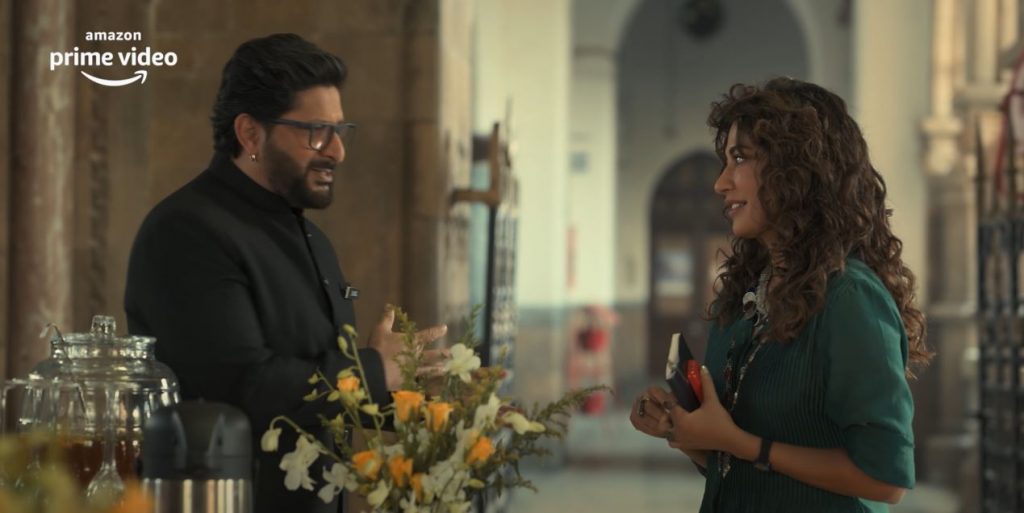 Credit where credit is due, Cutting Chai is probably the most creative anthology episode in the series, after Mumbai Dragon. There’s some good intercutting between the past and present, which are separated by their own color palette and settings. DOP Sanket Shah, editors Shan Mohammed and Yasha Ramchandani, production designers Tanvi Pati and Ravi Srivasatava, and costume designer Arun J. Chauhan should be lauded for that. But the overall execution is bland and simply boring. There’s so much talk about passion and commitment and dreams, and yet none of that momentum is present in the storytelling or the performances. There is one oddball choice where random passengers utter words that haunt Latika in unison. The attempt is commendable but it comes off as unintentionally hilarious. And then a major chunk of its runtime is dedicated to tying every episode prior to this one with a neat (read: not-so-neat) bow on top, which doesn’t work as well as the makers think it does.

Just watch the one by Vishal Bhardwaj, i.e. Mumbai Dragon, and don’t waste a single one of your depleting but precious brain cells on the rest of the episodes in Modern Love: Mumbai. It’s seriously not worth it. If you have any semblance of romance in your body, you’ll probably find it evaporating by the time you get to the end. If you are feeling “toofani”, please, go ahead and watch the entire anthology series. I do have one piece of advice for the showrunners, though. It goes like this. Let Muslim creators tell their stories. Let creators who identify as queer tell their stories. Let people from minority communities tell their stories. Don’t try to be their spokesperson. Stop appropriating their stories. Stop using their stories as cosplay. If you care that much about representation, let the people who need representation represent themselves. If you don’t, the only thing you are doing is exploiting their stories for your monetary benefit.