The tense, anxious undercurrents in Alan J. Pakula’s directorial approach and the signature inky-black cinematography of Gordon Willis are the crucial elements that contribute to the general tone of Pakula’s ‘paranoid trilogy’, comprising of Klute (1971), The Parallax View (1974), and All the President’s Men (1976). The endless speculations in the aftermath of JFK and Robert Kennedy’s assassination, Vietnam War, the infamous Watergate scandal activated a growing sense of mistrust among the American public on the nation’s political set-up.

One resilient all-American hero (picture James Stewart) stood for ‘what’s right’ in Frank Capra’s cinema (Mr. Smith Goes to Washington, 1939). But from John Frankenheimer’s The Manchurian Candidate (1962), the system was shown to be bigger and deceptive than the ‘good intentions’ of altruistic individuals. Hence, the web of lies, cover-ups, and conspiracies designed by the political establishment and big business to uphold the ideological and economic interests of few naturally became the primary theme of 70s paranoid thrillers.

In most of the films in this cycle, the merging of factual details and theories of the conspiracy weren’t done with didactic dialogues, but by employing meticulous, profound, and riveting aesthetics that also worked as a study in suspense. Hitchcock and Antonioni’s films have had made some influence in creating the ‘Nixonian’ atmosphere: from Coppola’s The Conversation, Alan Pakula’s paranoid trilogy to Pollack’s Three Days of Condor and De Palma’s Blow Out. The result was filmed that were a little harder to follow in the moment but potent and profound in retrospect.

While Klute (1971) established Pakula as a respectable director of drama genre and bestowed Jane Fonda with an Oscar & Golden Globe, and All the President’s Men (1976) still remains as the go-to movie for investigative journalism, The Parallax View (1974) received mixed reviews and was a box-office failure. But damn the first impressions as the film’s reputation has grown over the years, whose impalpable sense of paranoia resonates a lot with our post-truth society. 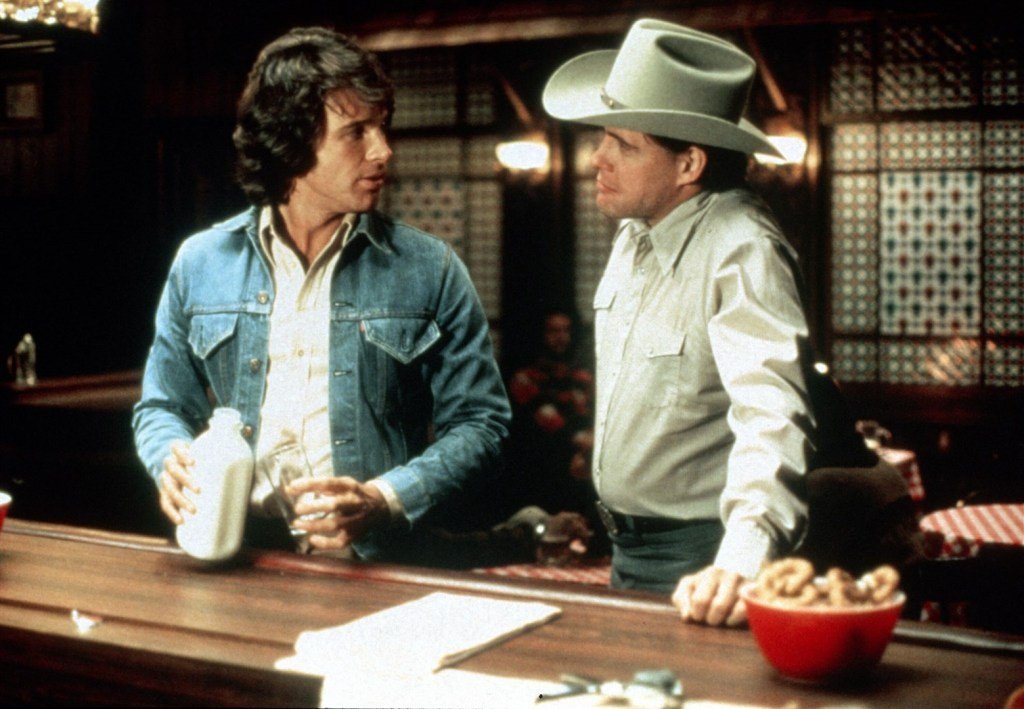 Based on Lorenzo Singer’s 1970 novel, The Parallax view was adapted to screen by David Giler and Lorenzo Semple Jr. The writing was considered to be politically savvy, largely driven by the awareness following the exposure of Watergate Scandal (in 1972). As the title suggests, point of view plays an important role in this suspense story, forging an unexpectedly harrowing political commentary. The film opens on a sunlit Seattle, buzzing with Fourth of July parade. Amidst the activities, a winsome US Senator (also the presidential candidate), his lovely wife and their entourage parties atop the Seatttle Space Needle. A Bobby Kennedy-type assassination follows, and the cornered waiter-assasin plunges to his death. After months of investigation, a government inquiry concludes that a lone madman was responsible for the Senator’s death and subsequently dismisses the conspiracy theories.

Related to The Parallax View — JFK [1991] Review: A Riveting Account of an Interesting Conspiracy Theory

But three years after the assassination, six of the bystanders who witnessed the events at Space Needle have met with ‘accidental’ deaths. One of the witnesses, Austin Tucker (William Daniels), is one the run. And another, a reporter named Lee Carter (Paula Prentiss), visibly unnerved, strongly entertains the possibility of a conspiracy. She seeks help from her ex-boyfriend Joe Frady (Warren Beatty), an easygoing reporter with disheveled hair, working for an obscure Oregon newspaper. Frady is skeptical of Carter’s theory of ‘systematic elimination’ and does his best to cool her down. What follows is a disorienting cut to Lee Carter’s body laid in the morgue.

Now seeing the truth in her suspicions, Frady acquires a phoney I.D. from an ex-FBI friend and sets out to investigate. Frady’s search for Tucker initially brings him to a small Texan town of Salmontail, where he encounters big trouble with the local law. However, this visit to the small town makes Frady aware of the existence of Parallax Corporation. Sensing the true nature of the corporation, Frady contacts his tough editor, Bill Rintels (Hume Cronyn). Hoping to understand the ways Parallax Corporation carry out ‘human engineering’, Frady fills in their recruitment form. What follows is a brilliant undermining of conventional expectations.

The darkness waiting to envelop the atmosphere is one of the memorable visual motifs in The Parallax View. The early and final representation of courtroom floats away in darkness, making us wonder about their complicity in the alleged conspiracy, especially when the powerfully intone, “There is no evidence of a conspiracy”. When Frady meets the editor Rintels in the later’s office, director Pakula hints at their tiring fight for truth & justice by keeping them under bright light while the rest of the surroundings are kept dark. Pakula often emphasizes on contrast, sharply cutting from dark, murky interiors to characters moving under sunlight.

In fact, the director meticulously extracts disorienting effort using the longshots of exterior locations. Pakula tries to generate a feeling of being under observation in these sequences set in the bright outdoor settings (for instance, the moment when Frady takes an amusement park train-ride with his ex-FBI friend). Pakula also boosts up the unnerving effect by staging certain scenes using long subjective shots (the world of glass, i.e., corporate architecture adds to Frady’s tense subjective gaze). This takes place when Frady looks at a subject of interest whose motivations he either can’t understand or misinterprets (the entire climax stretch which unfolds from Frady’s POV was the best example). 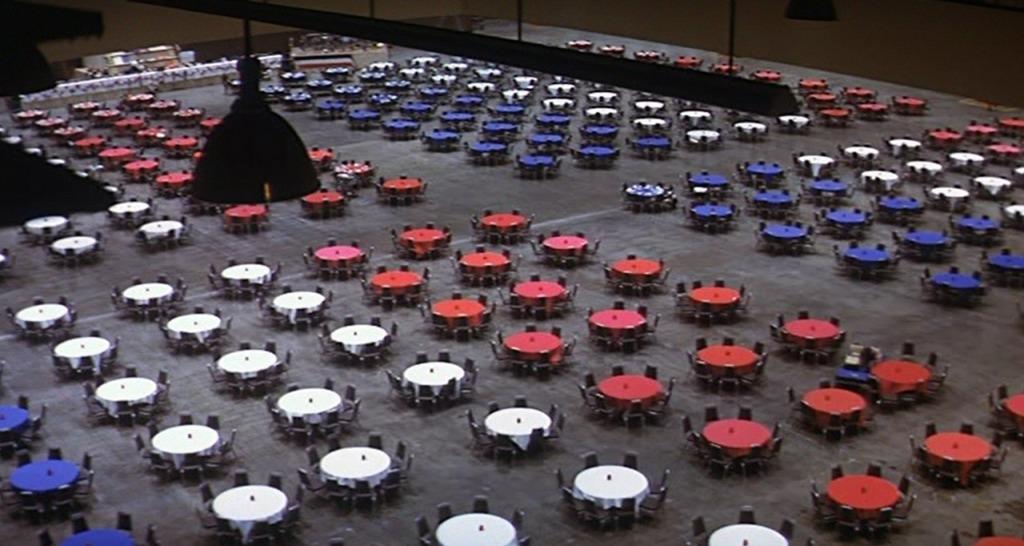 As in many of the 70s paranoid thrillers, director Pakula includes several long, silent, and anxious passages and he also holds shots without a cut. While I was thoroughly hooked by the anxiety-inducing final sequence, my favorite was the one where Frady follows a mysterious guy, ends up on a jumbo jet, realizes there’s a bomb on board, and thinks of a way to convey the information without provoking panic. The whole thing was remarkably staged, right up to Frady saving the day and the bomb blast (after passengers are disembarked) that happens off-screen. The Parallax View never takes a clear-cut look at the fear and lies lurking beneath the labyrinth of conspiracies. Pakula’s intention here is to simply make the viewers to feel the essential loss of trust, between citizens and establishment. It’s all about disorientation and layers of duplicity that drives the modern political culture.

Pakula’s atmosphere of corruption and malevolence deftly overcomes the implausibilties and incongruities in the plot. Perhaps the director’s aim to provoke a reaction on the viewer is better encapsulated in the scene Frady is subjected to a test in the Parallax office. A montage of ‘good’ and ‘evil’ images flashes across the screen, recording Frady’s emotional response to deduct his ‘suitability’ to work for them. What starts off as serene soon becomes aural-visual bombardment, which also deliberately disorientates the alleged meaning of the images. However, throughout the test we never see a reaction shot of Frady’s visage because it’s all aimed at us.

Eventually, casting Warren Beatty in the central role effectively hides the plot’s duplicitious nature. Beatty’s Frady wins a barroom brawl, overpowers his would-be assasin, and seems determined enough to unveil the truth. But at the same time, he is a stark contrast to the Woodward and Bernstein-type reporters. Frady keenly observes and takes few positive actions (saving a plane full of passengers) yet his heroics are shown to be ineffective before the faceless adversary (which we exactly don’t expect wth Beatty playing protagonist).