Park Chan Wook’s Thirst is like the cinematic exploration of how it feels when someone does things that he/she is strictly prohibited from doing. In a rather ironic (and hilarious) fashion, Chan Wook puts a God-fearing, pious priest and a demure, sexually deprived housewife in the center of the film and weaves a fiery tale of passionate love and uncontrollable bloodlust between them. The film feels like a caged wild beast during the film’s initial half hour wherein you get the impression of the beast trying to break free into the wilderness. When it finally does get out, it goes fanatically berserk; and that’s where the fun begins. Watching this film can be described as feasting on a sinfully delicious meal which might not be great for your health, but it tastes so wonderful that you just can’t stop gorging.

Thirst is a rare vampire-horror and romantic drama mash-up, and that somehow works as a supremely entertaining piece of cinema; which is definitely not for the faint-hearted or morally righteous people. But if you have a thing for blood, gore, violence and of course dollops of sex, then this film could qualify to appear in your wet dreams.

Park Chan-Wook has been noted for making some great films over the years (The Vengeance Trilogy and the latest The Handmaiden are the works he is best known for) and Thirst is no exception although it is not as popular or widely-discussed like his other films. It is rather an under-appreciated gem; an incredibly gorgeous looking, hyper-erotic, no-hold-bare dark cinematic extravaganza which deserves to be savored and cherished by cinema enthusiasts. 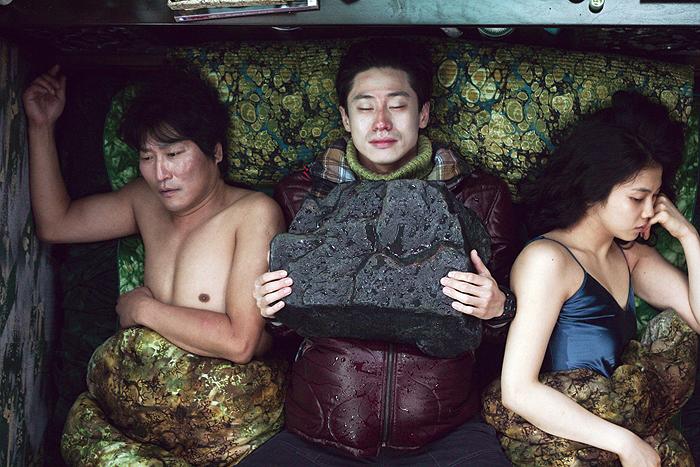 Park Chan-Wook brings a new twist to a generic staple of our usual high cheekbones Vampires that appear in Pop Culture; vampires who siphon off blood, and have elongated teeth to hook on the carotid artery. His jazzed up & evolved Vampire tale feels relatable, even if the possibility of their existence shares a similar fate to fairy tales.

Driven by the invigorated passion, Park Chan-Wook’s Thirst is filled with an abundance of inventive ideas and meticulous characterization, at times he gets nasty & creepy- which is usual for him- his ideas sometimes hover in a cynical zone that may leave you agitated. Still, the film feels crowded at times and has enough ideas crammed to have at least one half-baked subplot. The characters are layered and Park Chan plays manages to give them an emotional gravity. He creates an arena of moral disputes between two diametrically opposite souls connected by alienated feelings.

He is a blood-drinking coward- as he quenches his thirst without aggression & killing, by secretly drawing the blood from coma patients or if someone volunteers for it. She takes pride and glory in hunting, and then the luscious bite cut open carotid artery to drink the splash of delicious, red shimmering blood. They are in love. She surrenders herself to him, and he is hesitant. He is a priest with values, nd she is just a body with no moral, social or ethical values who is treated no less than a lackey. They indulge in a  love-hate relationship like no other.

Thirst has neither he restrained storytelling of The Only Lovers Left Alive or the sharp focus of Let the Right One In but Park Chan-Wook does not care about it. Park is in absolute love with his craft and indulges in it without any inhibition. Even though the subplot of psychological tension created by the sudden appearance of a dead spouse is amusingly effective, the subplot is under-utilized and feels redundant in retrospect. Thirst is a rollicking vampire-serial-killer-noir romantic thriller guarded by moral and religious beliefs.

Once Upon a Small Town (Season 1), Episode 11: Recap & Ending Explained