Thou Wast Mild and Lovely [2014] Review : A Breathing Nightmare

There’s certain animalistic quality to Josephine Decker’s feature that is bound to be divisive. From the beginning where her characters, a father and daughter, are seen almost wrestling on the grassy terrain; it refuses to be simple in its approach. There’s a fluffy part in their hands filled with blood, which they throw at each other like some sort of game. The camera is hardly focusing on anything at the moment. Suddenly it pans towards the empty terrain, completely out-of-focus and then leads to a snarling dog behind the wires. It’s not easy to understand the director’s intentions. It’s not easy to get used to her style either. ‘Thou Wast Mild and Lovely’, Decker’s sophomore feature, is a testament of the same.

The daughter that I mentioned before, Sarah (Sophie Traub) lives in a barn on that terrain with her father- Jeremiah (Robert Longstreet), who seems to be quite adamant about the way she is supposed to behave. His own behavior though often seems creepy which makes one question their relationship with one another. Joe Swanberg plays Akin, who arrives there, for working at their farm as a summer job. Although he’s married, he hardly utters a word about his wife or kid at the time. Meanwhile, he develops a liking towards Sarah, who happens to be attracted to him as well. ‘Liking’ is probably too weak to describe their desires. Their interactions come from strong impulses than any prominent character motivations. 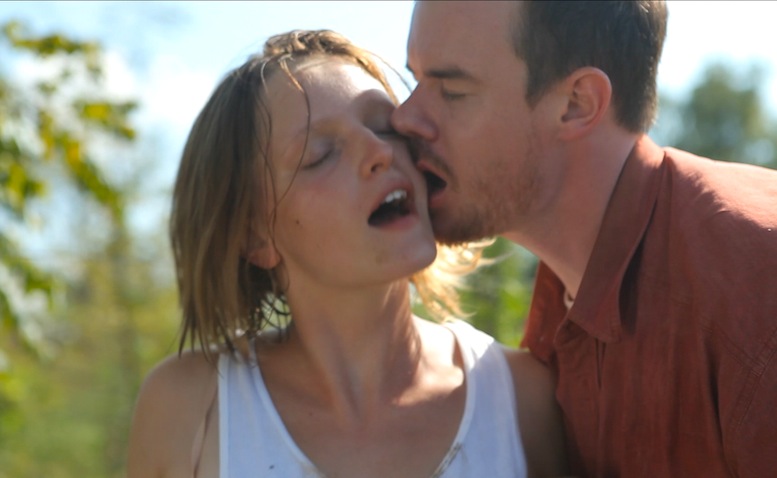 Sarah’s father doesn’t necessarily accept their coy romance. But he realizes it no matter how badly both of them try to hide it. He isn’t aware of Akin’s marriage which sets things loose for a while. Even there’s a joke or two assuming each of them knowing other’s intentions. Later when he gets to know about Akin’s wife, he (the father) invites her on their barn. Further chaos, although pretty predictable, doesn’t lose the bleakness that is maintained throughout.

There’s sly underlying humor and romance in the guise of mutual understanding. But the film hardly wants to settle with a satisfying tone. There’s a palpable tension even in small gestures. No matter how strange their actions may seem, they go along with their carnal desires.  The uncomforting close-ups of animals from their farm; their skin, and their flesh, implicate the same raunchy muscular energy floating throughout. It somehow detaches the narrative from outer civilization implicating the characters’ detachment. There’s nothing beyond that barren for these two. It exemplifies that.

The camerawork is unconventional, which is on the verge of looking artsy without a purpose. But even when the narrative flounders, the sharp, unnerving cuts matched with intentionally confusing cinematography, don’t feel out-of-place. The film, as a result, works more as a sensory experience. It’s not incoherent but it’s purposefully hard to keep track of. It feels more like a ticking bomb for their outburst. And that justifies the climactic sequence which takes the graph of their script, much higher. The unsuspecting change of morals makes it tad clumsy at the end. But it ends up being a disturbing mood-piece which deep down speaks about the Stockholm syndrome. Even if he escapes from there, will there really be an escape from this nightmarish reality?

Thou Wast Mild and Lovely [2014] Review : A Breathing Nightmare