The Japanese master of modern family dramas, Hirokazu Kore-eda, in the past two decades has created a body of work that gracefully and subtly explores the fascinating private worlds of emotionally vulnerable individuals.  Since Kore-eda fleshes out his emotionally complex characters without employing high-strung drama, his works may disappoint those expecting neatly aligned conflicts and respective resolutions. Nevertheless, the emotional wallop, patient cinephiles derive from the film-maker’s profoundly humanistic observations will forever be entrenched in their minds. His latest luminous character piece “Umimachi Diary” aka “Our Little Sister” (2015) is yet another drama of delicacy that quietly grows and blossoms on our heart. Based on Yoshida Akimi’s famous manga series, “Umimachi Diary” is a deeply attuned tale of acceptance. 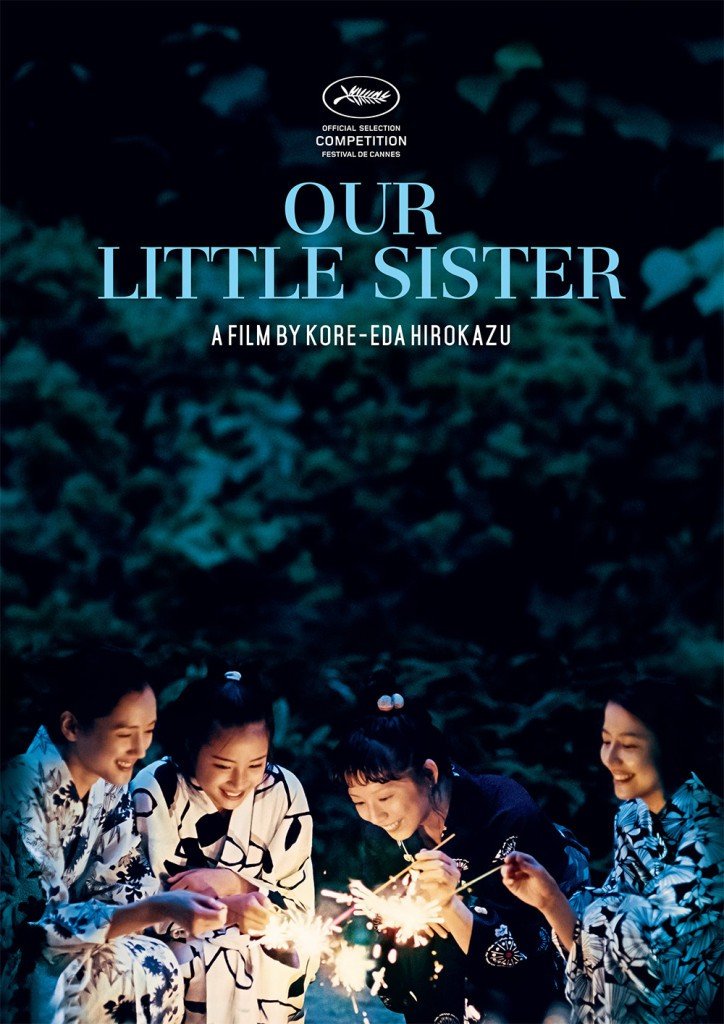 The film opens in a small beach town, Kamakura (the final resting place of the great Ozu) and intimately follows the lives of three young sisters, living by themselves in a large family house. The eldest Sachi (Ayase Haruka) is in her late twenties, works as a nurse and is the stand-in matriarch for the family. The middle one Yoshino (Masami Nagasawa) is a bank employee, who often falls for wrong men and ends up getting drunk after each break-up. The youngest carefree Chika (Kaho) works in a local sports shop. At the movie’s beginning, the sisters hear about the death of their estranged dad, who many years ago have left them and their mother for another woman. The mother, emotionally stricken by her husband’s’ behavior left the three daughters, under the care of grandmother. Upon hearing the news, the trio, however, makes the trip to attend their father’s funeral and meets 13 year old half-sister Asano Suzu (Hirose Suzu) for the first time.  The sisters also meet their dad’s third wife (Suzu’s mother has passed away), whose self-absorbed nature makes Sachi to invite Suzu into their ancestral abode. 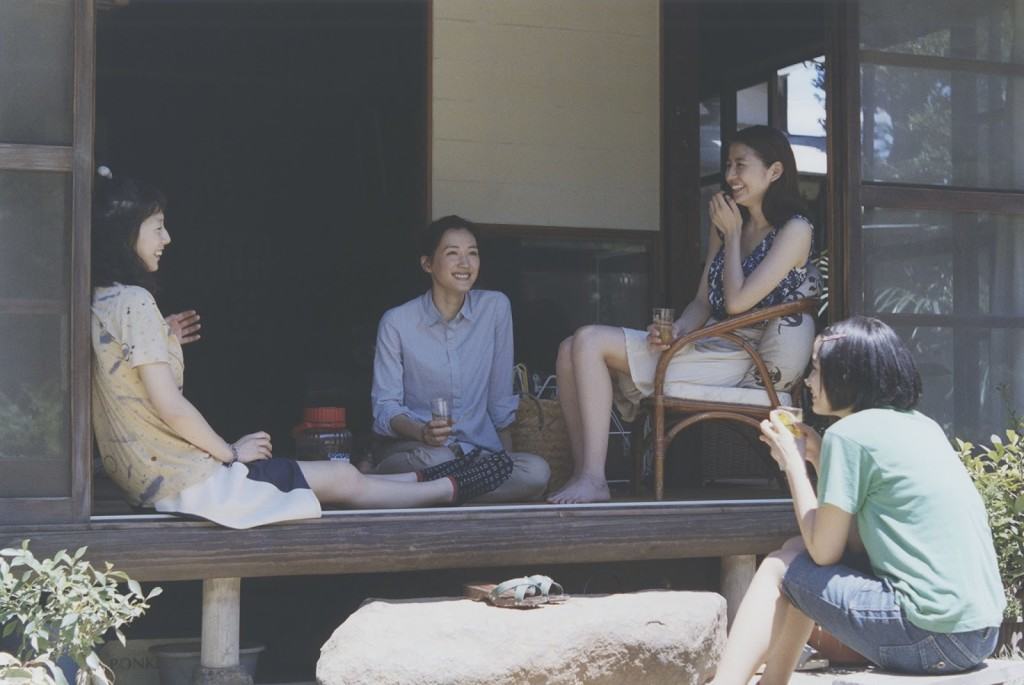 Asano Suzu willingly moves in with her half-sisters and perfectly fits in the new surroundings, without facing any friction. Suzu is a considerate girl and mature beyond her years. She is incredibly talent in playing soccer. There’s little bickering and arguments between the sisters (mostly between Sachi and Yoshino), but there’s always a robust feeling of alliance and warmth. Deep down they all are very Japanese in their conduct, although their perception of life and response to life’s simplest joys or brooding internal conflicts could be easily understood (or related) by all contemplative young men and women around the world. Despite attaining three caring siblings, Suzu feels guilt over her own mother’s action, which ruined the sisters’ childhood and adulthood. A visit from estranged mother (for grandmother’s memorial service) gradually brings those feelings of suppressed pain and guilt. The eldest Sachi, who hates her father for his infidelity faces an ironic twist in fate. But these inner turmoils and distressing arguments are impeccably or organically weaved into the narrative that never swerves, just for the sake of drama.

The attentive and nuanced portrayal of families in Kore-eda’s movies is an absolute treat to watch.  Neither his writing nor his directorial touches interfere with the nuances. Half-way into the film, the sister’s visiting mother ineptly states about selling their ancestral house, since they all might get married and move out one day. Subsequently, an argument ensues between Sachi and mother, while other characters try to bring down the conflict, in the most credible way. In typical family dramas, such a setting would be used to derive maximum emotional catharsis, but here it is set-up in a way that makes us remember some argument we encountered in our own life. In fact that very argument, later leads to elegant gesture from both Sachi and mother. The first half of the film leisurely sets up the characters through little disjointed episodes. “Everything in life takes time” says a character in the film, and so the initial sowing of the character traits may not enamor us. However, those little moments gradually lead to powerful and much earned pay-offs, which infuses the feeling of riding through corridor of cherry blossom. At times, when the characters grieve over their negative memories, we feel like reaching out to the screen and hug them to say ‘don’t worry, everything would turn out better’. Yet, in some other moments, when the characters move through grief, fear of death and negativity with eloquence, it feels like they are hugging us to instill the right attitude in dealing with life. It is this astounding relatability factor that makes “Umimachi Diary” or other Kore-eda’s works to stay with us, even long after its on-screen narrative fades to black. 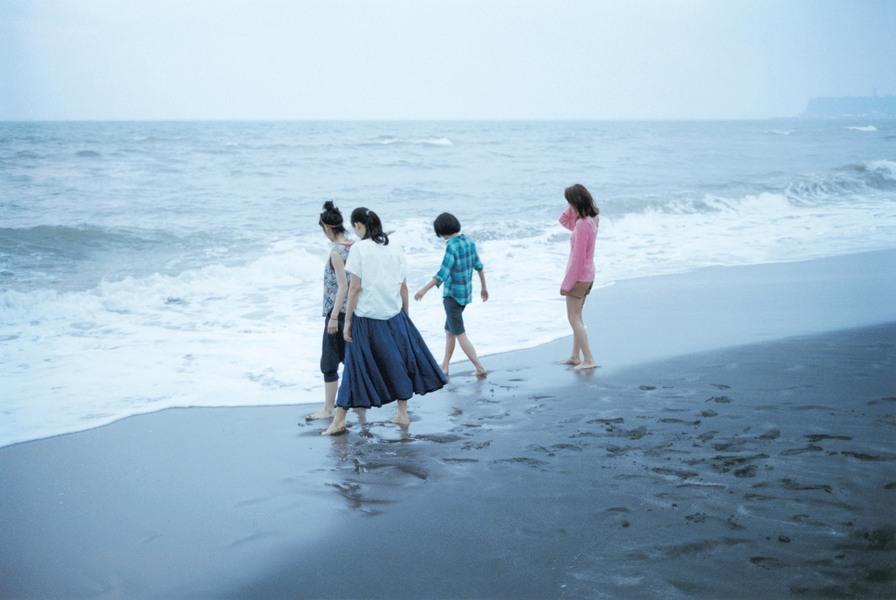 Memory, death, grief, nostalgia and self-acceptance are the significant and recurring themes in Kore-eda’s films. With simple gestures, emotions and using the idea of passage of time, the filmmaker elegantly fleshes out those pet themes. Like “Maborosi”, “Nobody Knows”, “Distance” and “I Wish”, this movie is also about people left behind by their parent or parents. The way those left behind confront the memory or death of those departed is what resonates in the mind of Kore-eda’s characters. In “Umimachi Diary”, Sachi has bitter memories about her father, while Suzu grieves over her very own existence. The duo attaining self-acceptance over the negative memory and grief of the past remains as central narrative trajectory (although it is a trajectory that never moves with cinematic conscience). The writer/director also ironically points out at the traits we inherit from our parents, even though we might have hated for our previous generation for those same traits (from the way Sachi falls in love with her married colleague). Nevertheless, Kore-eda doesn’t employ cynicism or judgmental attitude to view this inherent irony. His nuanced observation is more introspective, demanding to contemplate on our own fallacies.

As a director, Kore-eda shows the usual Ozu-esque poise. If the seasonal transformations, elevated shots of commuter train and multi-storey buildings are the Ozu inspired trademark details, there’s the typical Kore-eda way of observing characters: placing them at a distance, pinning them against the natural, large landscape. There are only few close-ups and even when he employs shot reverse shot, it isn’t to feed on the character’s sadness; it more or less to exhibit elements and perception about the character we weren’t aware of.  The director’s eye for details about Japanese food (roasted mackerel, white plum, etc), especially reminiscing about mother’s dish and repeated talks about photographs are all vital aspect in evoking nostalgia. Kore-eda’s approach of not story-boarding everything, and figuring out the naturalistic style of performance and filming on-location adds a lot to the ingrained realism in the script. The excellent quartet of female performers is perfect in showcasing their distinct personality. Particularly, Hirose excels in the delicate, titular role of Suzu (a newcomer). The movie, of course, could be accused of being episodic and too meandering. But, it doesn’t meander like an out-of-control vehicle; it rather meanders like a breeze you feel on your face, while standing atop a hillock on a summer evening.

“Umimachi Diary” aka “Our Little Sister” (126 minutes) is a remarkable, feel-good family drama with none of the saccharine or sentimental elements.